Santa Cruz is a t-shirt-heavy town. We print tees for all kinds of activities.

Few have been printed, though, for the tens of thousands of poor slobs who daily make the mountain-vaulting commute on Highway 17 from Santa Cruz to Silicon Valley, just so they can afford to live here in Paradise.

But I have t-shirts that remind me of what the trip was like, back in the ‘90s when my wife Rhumba and I commuted to the Valley together.  This one is from that era. 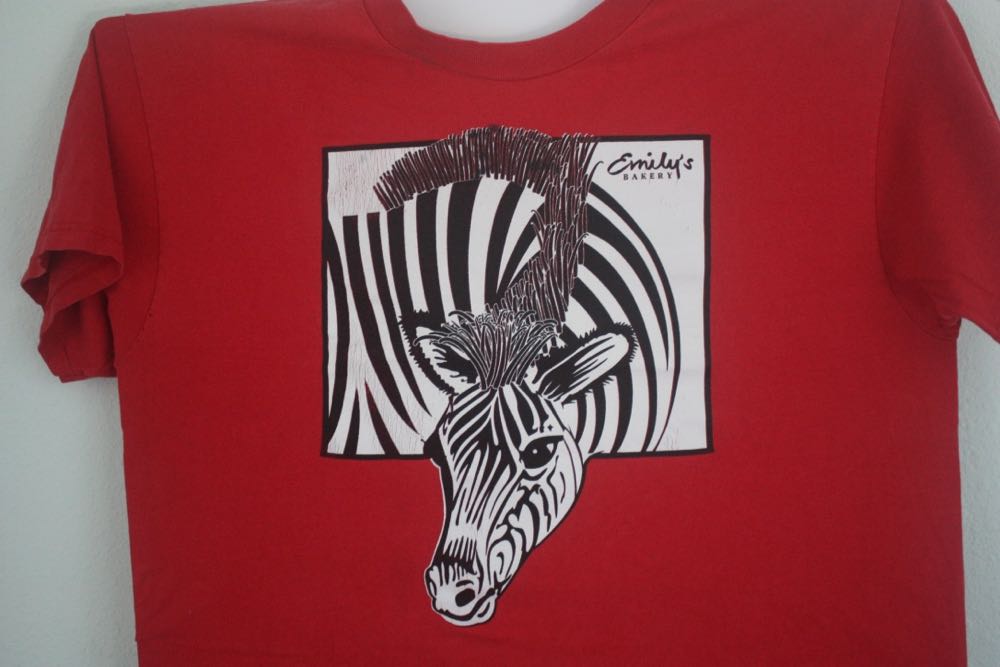 Emily’s Bakery has been around for almost 40 years; and for almost 40 years it’s been the only place to get a good coffee and pastry to go at 5:30 in the morning.  We had jobs in Milpitas, 40 miles away, with a 6:30 AM start time; the early schedule cut 30 minutes off the commute each way.

Emily’s was our launch pad; around 5:40 am, we’d pull into the brightly-lit  parking lot and run in for coffee and a bag of rolls for the road.

In the pre-dawn darkness, Emily’s was the only spot of light and activity on Mission Street: a strange, busy depot that fueled not cars, but people, for the long trip over the hill. Andd it was decorated with images of zebras.

Cars came and went constantly, headlights gleaming. Person after person in business casual  trudged through the door under the sign “Relax. You Have Plenty of Time.”  You lie, Emily, or we wouldn’t be coming to you for caffeine and sugar before the sun comes up.

On leaving the lot, almost every car headed north on Mission, to 17. We went with them, sipping coffee and munching rolls as we ascended and descended the mountains and swore at the other drivers. 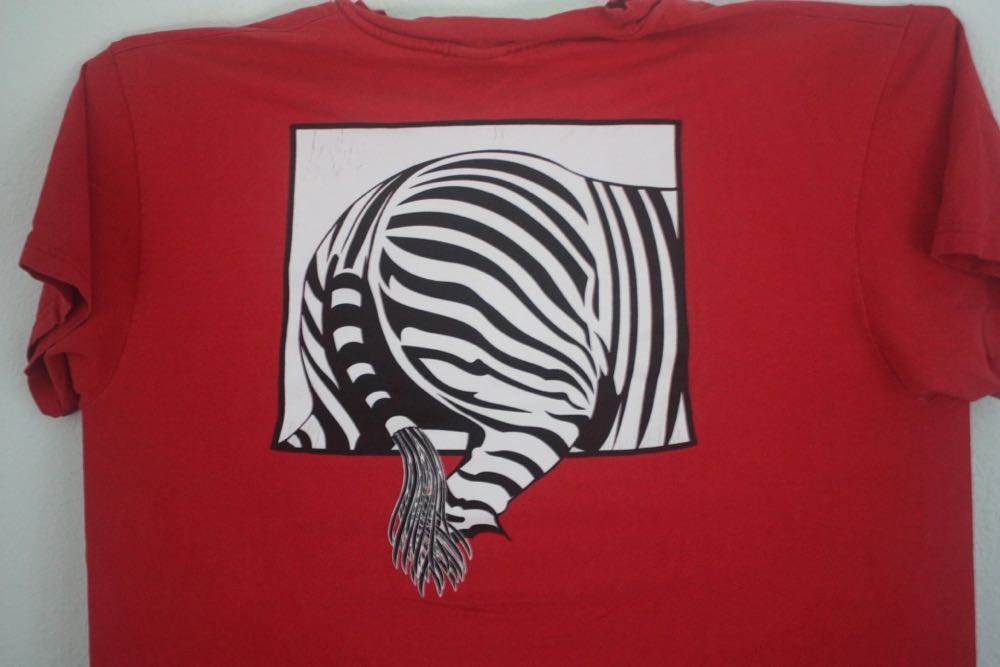 Twenty-odd years later, we no longer commute.  Emily’s still opens at 5:30 am, without us. I imagine that the early commute is more popular than ever, and that those who drive 17 in darkness still launch from Emily’s.  They don’t seem to sell t-shirts anymore, but zebras are still the bakery’s icon.  Emily liked zebras, from either end.

Moving on: a commute over 17 is a wrenching 30-something-mile journey over a twisty, moody four-lane mountain expressway. The road climbs and descends 1800 feet in a relatively few miles. High-speed performance cars dominate the inside lane; slow semis, the outside lane.  If you’re neither, it can be Hell.  This t-shirt represents part of our Hell. 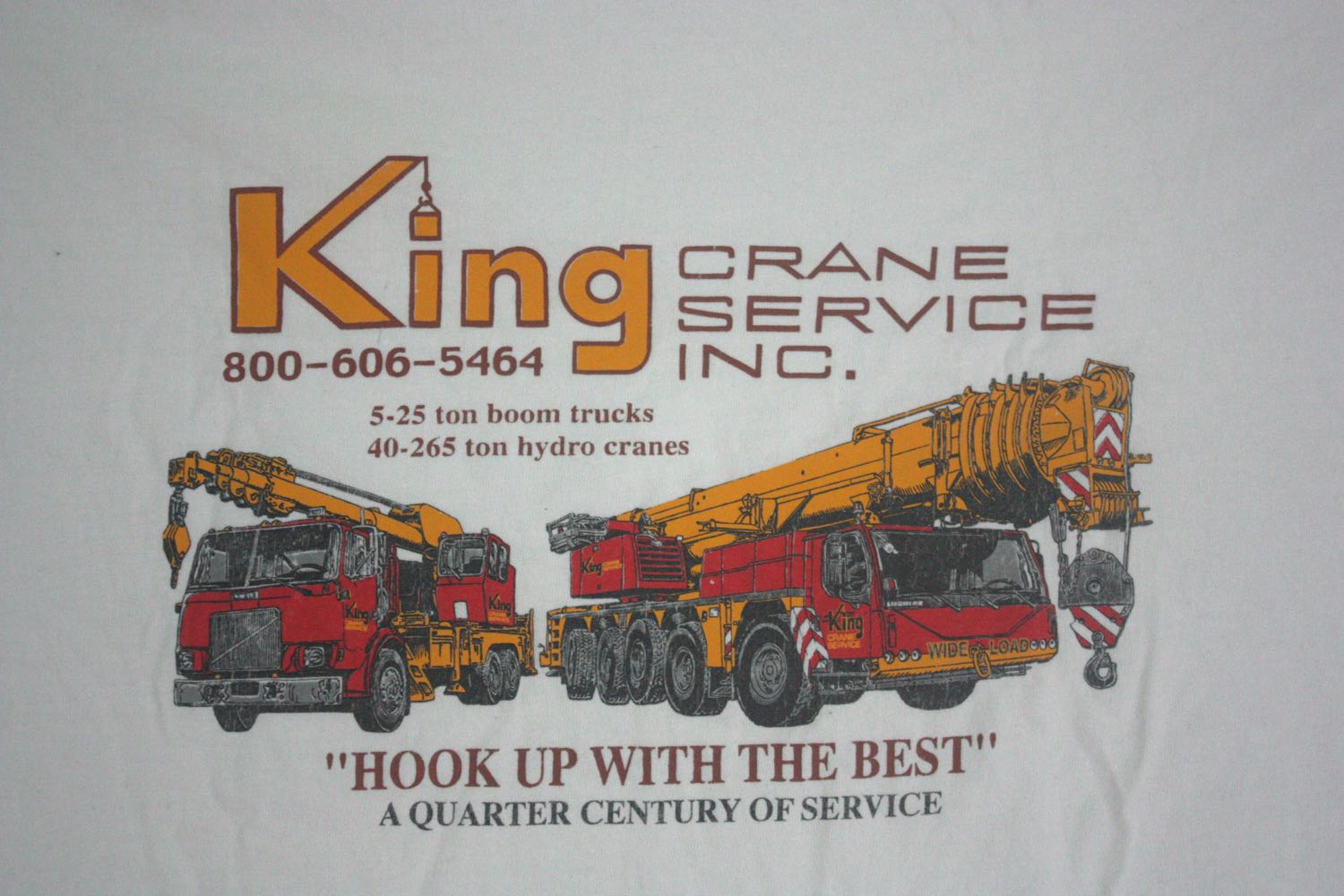 King Crane was a Santa Cruz-based crane rental and lifting services company.  Several times a week in the early morning, red-and-yellow King Crane truck-mounted cranes would grind up and down Highway 17 at 25 mph for an assignment in Silicon Valley.  Other big trucks moved slowly, but few seemed as slow as a King Crane.

Getting stuck in the slow lane behind a King Crane was about the Fifth Circle of Hell (anger), because breaking into the fast lane meant braving the German sports sedans hurtling along at 75 on a road meant for 50 MPH max.

Many’s the time we were making okay speed in the slow lane only to round a turn and find ourselves rushing up on a crane truck. You had about two seconds to make a choice: either slam on the brakes and accept your fate, or check the side mirror, say a Hail Mary and swing into the fast lane.

Once you squeezed in, there’d likely be a beemer on your tail flashing its lights in the 30 seconds you took to pass the truck and merge back over again.  God, I don’t miss that.

That was a long time ago; the King Crane company since moved to San Jose. I doubt that their red-and-yellow monsters still haunt the morning commute. I’m sure, though, that some heavy vehicles just as slow has taken their place.  Is the Spring Water tanker still making the trip? 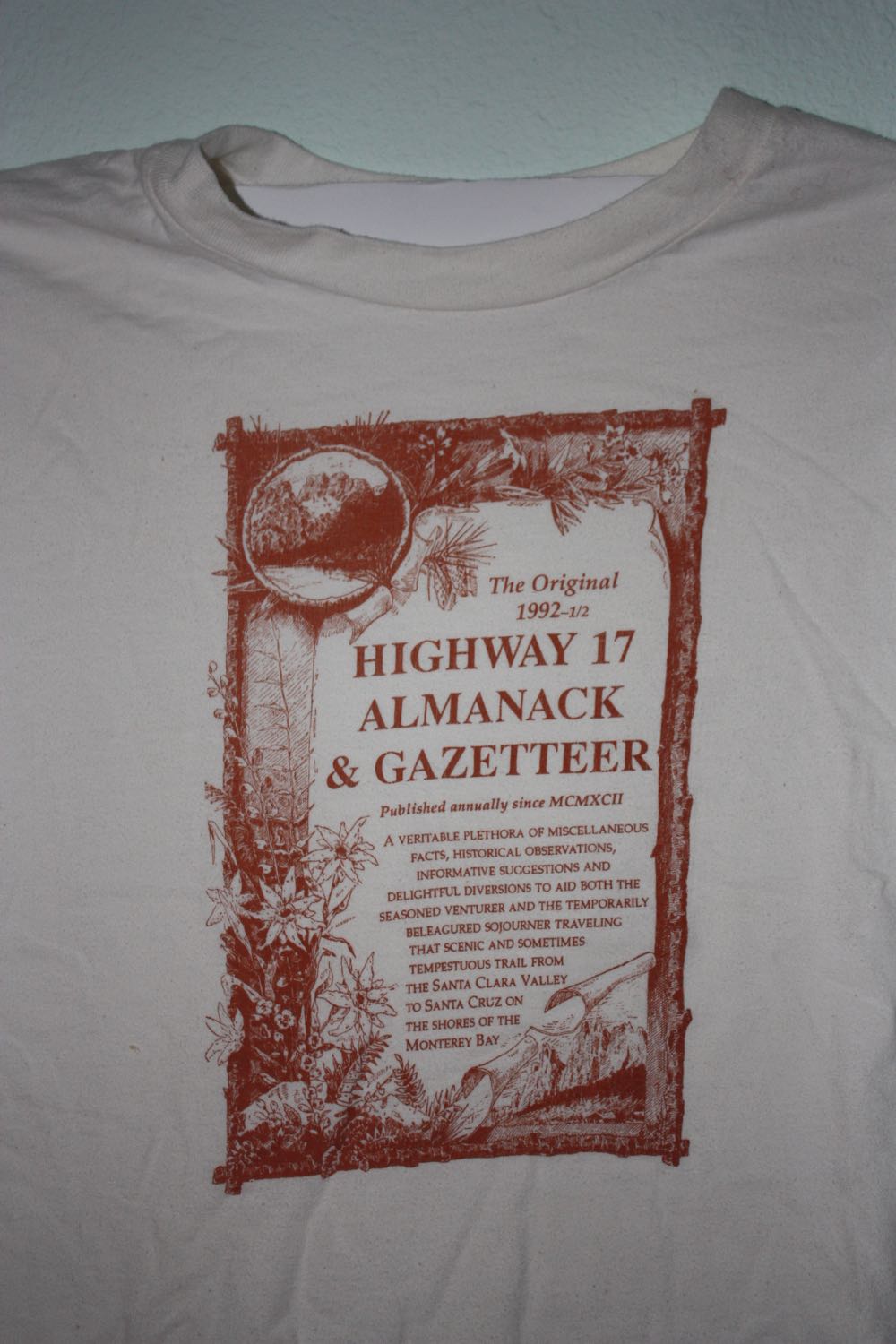 Finally, this: a t-shirt from the ‘90s touting a magazine about Highway 17.  Highway 17 is dangerous enough to be notorious, and yet it’s also Santa Cruz’s lifeline to the outside world. Someone thought that a magazine of Highway 17-related content was in order: The Highway 17 Almanack and Gazeteer.

They were wrong.  It lasted three or four issues. I skimmed a copy once; but after you’ve commuted on 17 for a few weeks, you know just about everything you need, or want, to know.  I’m just glad that I don’t have to know it anymore.