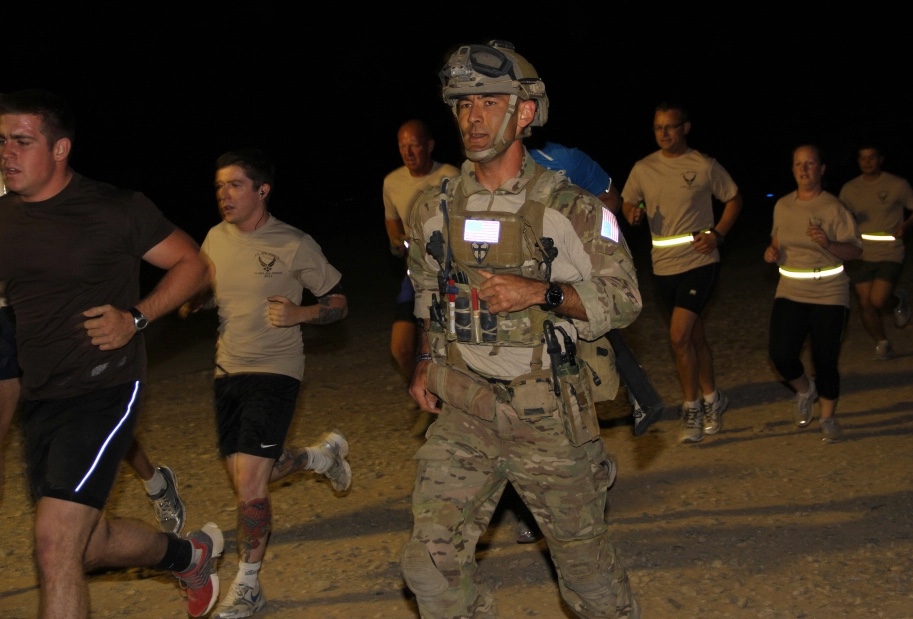 Welcome to Part Two of Running/Footrace t-shirts.  It will not surprise you that our boys in blue, navy, green, and green are avid runners.

The Army, Navy, Air Force, and Marines each have a Morale, Welfare, and Recreation command, or MWR.  MWR’s job job is to keep service families together, keep the troops and dependents occupied in their spare time, and help maintain physical, mental, and emotional wellness. 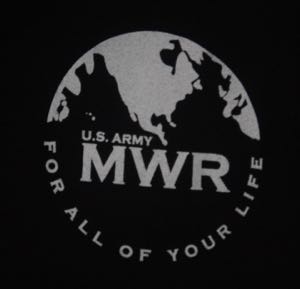 ARMY MWR Logo, off the front of a fun-run t-shirt.

And one of the things that MWR likes most of all, is a fun run: anywhere in the world.  It’s a nice distraction.  Distraction is their job.

Say it’s Halloween in Kuwait. How about a Zombie Apocalypse Run for the troops at Camp Buerhing? MWR is on the job.  And there are t-shirts for everybody. 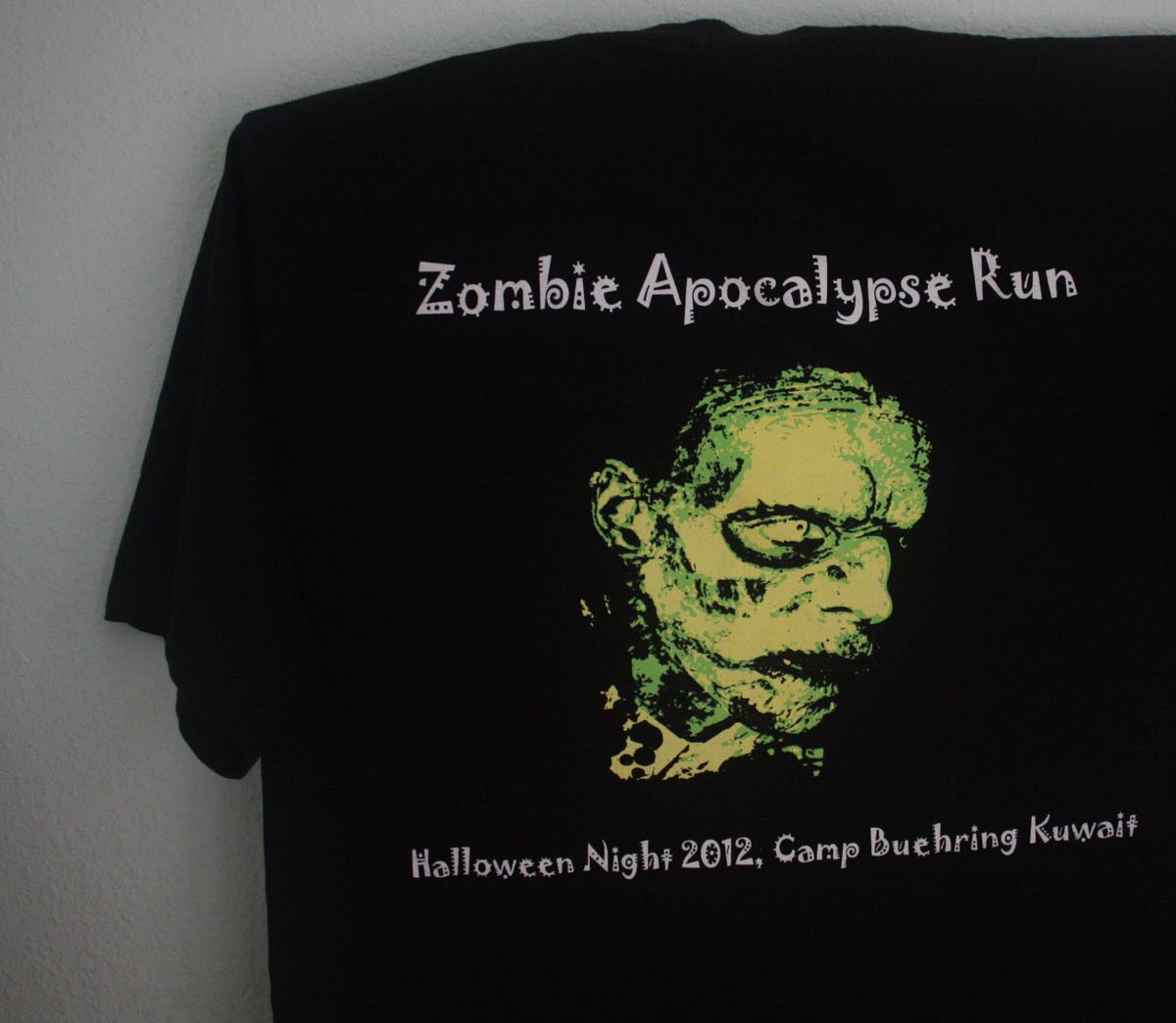 Or you’re a med tech at Guantanamo Bay Naval Hospital in Cuba, at the butt end of an island nation that wishes you’d leave.  What better to take your mind off your troubles that a marathon/half marathon in the Carribean sun? With a nice t-shirt. 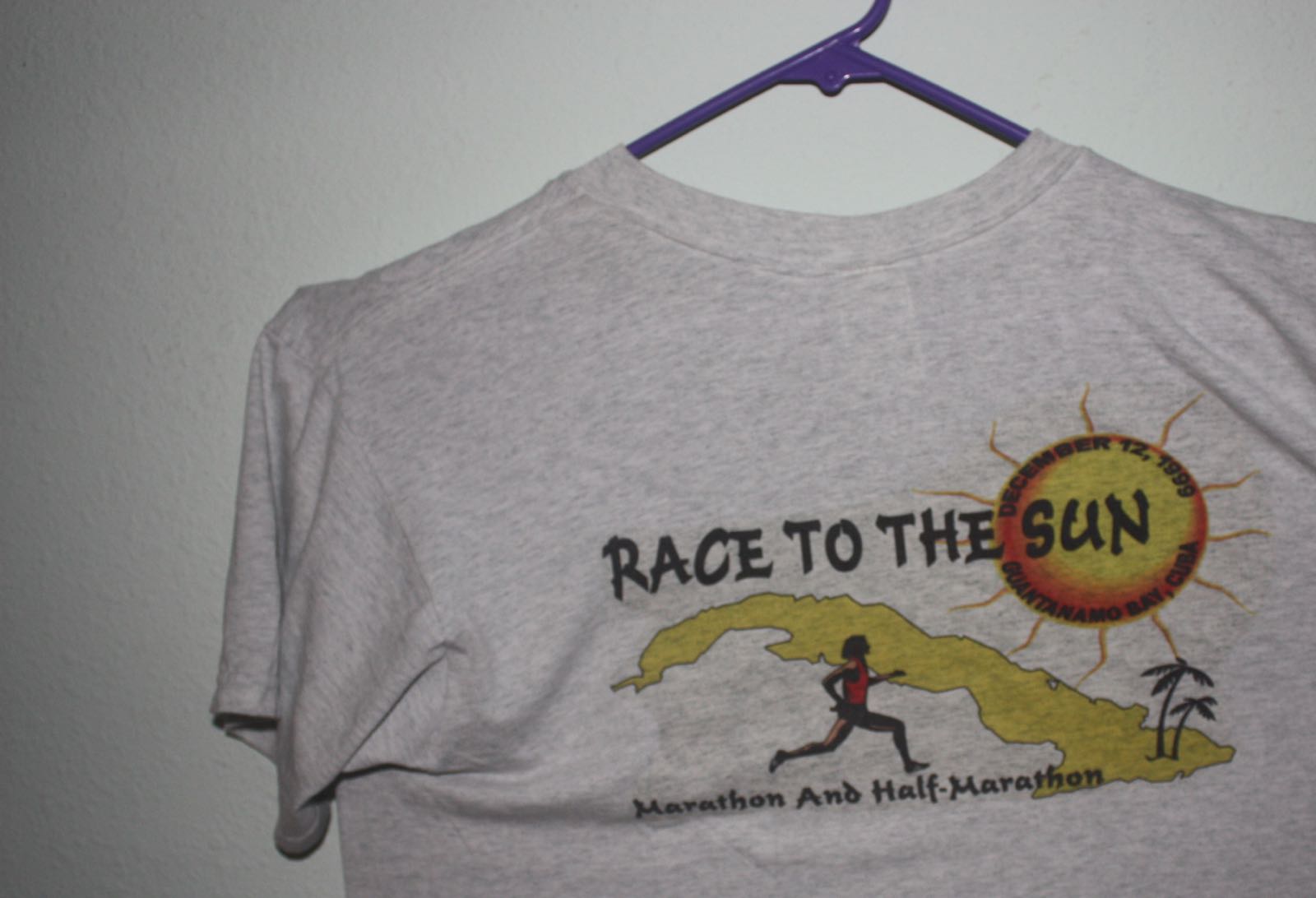 Memorial Day 5Ks in Kabul, volleyball tourneys at counter-terrorism bases in the wastelands of Djibouti: MWR never quits and never will.  T-shirts for everybody! 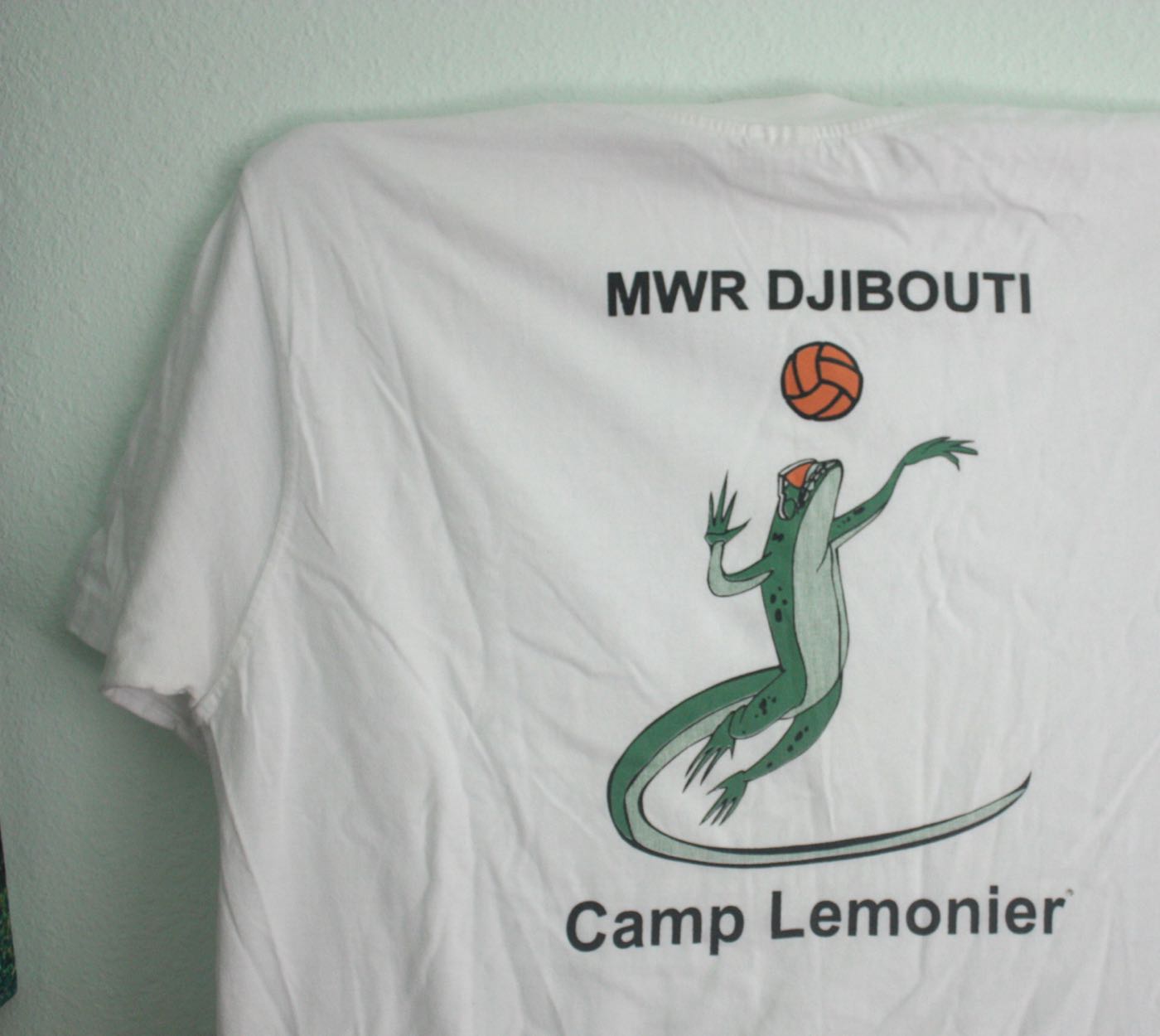 It would be controversial to talk about what goes on at Camp Lemmonier, so the government mainly doesn’t. Blazing hot, too.

By the way, MWR activities are funded by profits from the base exchanges where troops and their families spend their money.  In other words, the troops pay for it all, not the taxpayers; not that they were asked. Support Our Troops!

My personal favorite is a t-shirt for a Cinco De Mayo 5k. In rural Afghanistan in 2013.  At night, under a full moon.   In a city-sized military base in the middle of nowhere. Which no longer exists.  With a t-shirt featuring …. Death Herself. 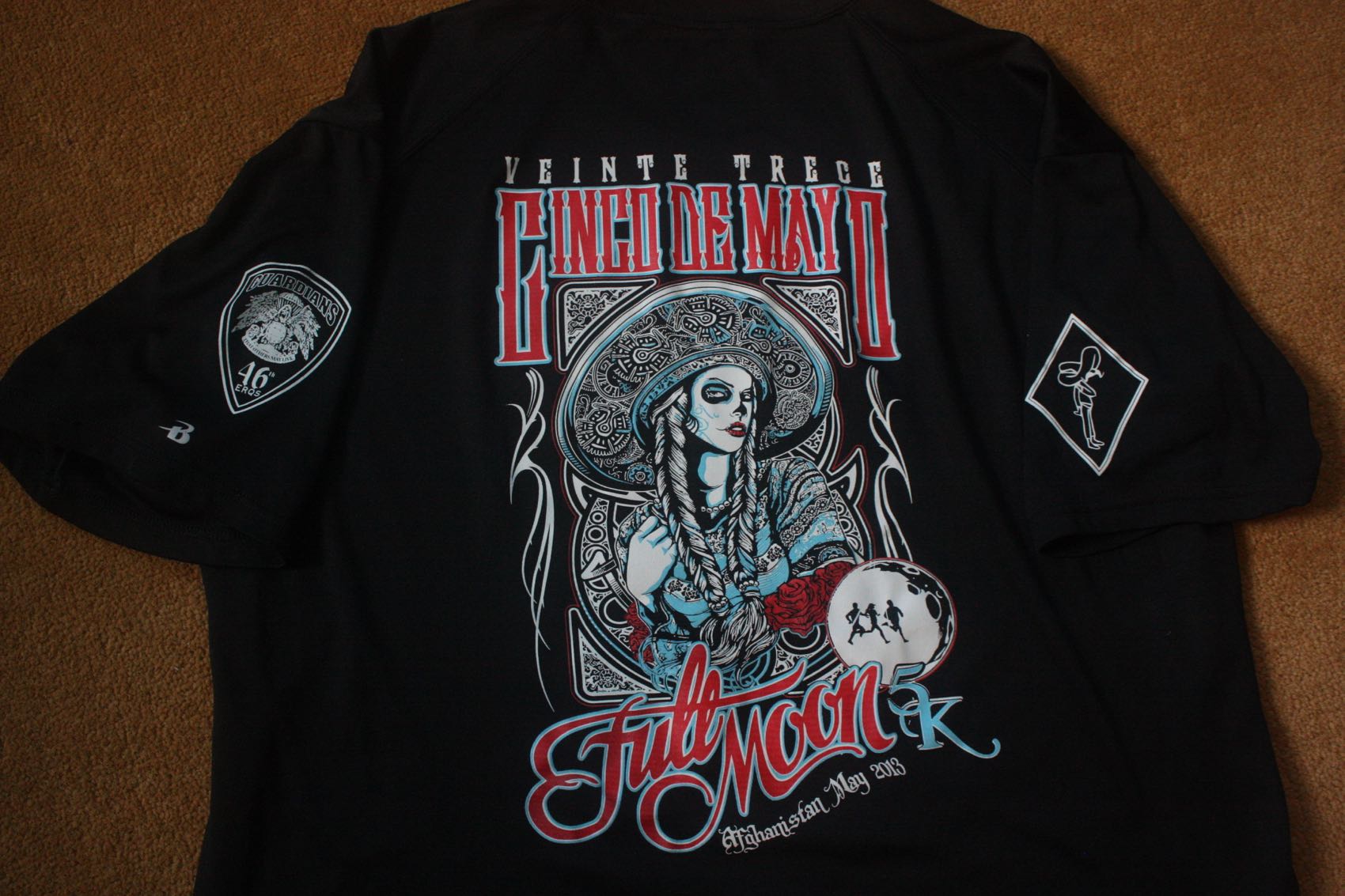 Pretty boss, huh? The hot babe is painted up like a Mexican calavera (skeleton totem).  Ignore the fact that calaveras have nothing to do with Cinco De Mayo, a patriotic holiday, and everything to do with Dia de Muertos, Day of the Dead.  Unless you mean that death is a woman, and if you’re a soldier you dance with her every day in Afghanistan.

And that may be the case. Because this t-shirt, and the 5K, is all about people who did.

For answers, decode the shirt. The patch  on the left-hand sleeve is the shield of the 46th Expeditionary Rescue Squadron (ERQS), a US Air Force unit whose job it is to rescue wounded or stranded soldiers in dangerous territory and bring them back.

ERQS Guardians are the closest thing that the US Gov has to superheroes; the Air Force gave them a superhero name, after all.  Note the angel’s wings on the patch: guardian angels.

Guardians get two full years of grueling survival, combat, and rescue training.  They’re trained to shoot their way in and shoot their way out with the wounded over their shoulder, on foot, by parachute, by water, and of course by chopper. They operate under the Air Force’s somewhat obscure Special Operations Command.

If you ever watched the science fiction TV series “Stargate,” Special Operations would have been the outfit that was sending heavily armed airmen through an inter-dimensional gate to fight godlike aliens on other planets. The Guardians would probably be up for it.

To confuse the issue, your average Guardian is referred to as a PJ, short for “pararescueman.”  The troops may also call him a Pedro, after the choppers that many PJs fly in:   HH-60 Pave Hawks. “Pedro” is the call sign for all military rescue choppers, back to Vietnam.  That’s why there’s a stereotyped Mexican on the tee’s right-hand sleeve. PJs do use other aircraft as well.

The Guardian motto is “So Others May Live.” PJs are highly admired by the average soldier.  Somebody who scoops your bleeding body out of a trench and drags it to safety while shooting the bad guys? You tend to admire them. 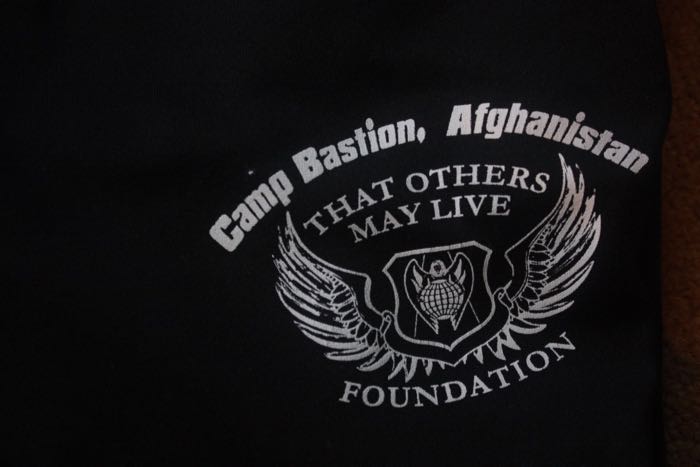 And that’s what this t-shirt is all about: see this logo on the front of the tee, over the heart:

This 5K run in Camp Bastion, Helmand Province, Afghanistan, was staged on behalf of the “So Others May Live” Foundation. And it’s not the first one that was.  I’ve got photos of a run that the Camp Bastion Marines put on for the foundation a few months earlier. There was one at the top of this article.  Here’s another: 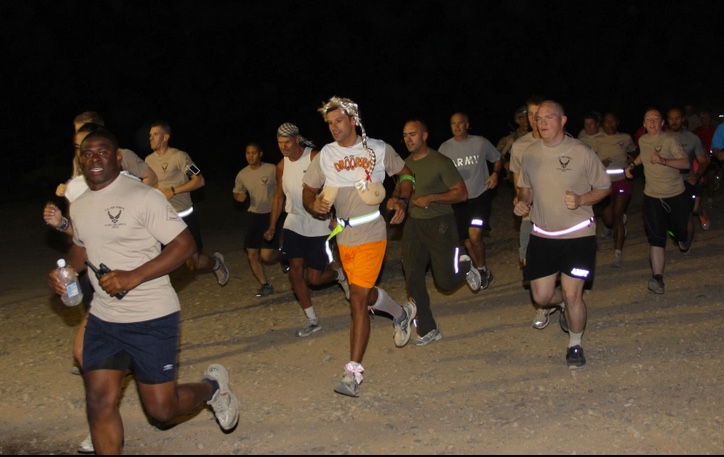 Even superheroes die: in combat, in a chopper collisiion, in all kinds of ways.  The SOML Foundation provides aid to the families left behind. This tee bears the shield of the 46th ERQS because that squadron operated out of Camp Bastion, pulling wounded NATO and Afghan troops out of godforsaken fire bases and flying them home in its Pedros  to Camp Bastion hospital.

That’s what Camp Bastion was for: to support NATO operations at hundred of bases throughout a large part of Afghanistan.

The British built the camp in 2006 in Helmand Province because Helmand was the most Taliban-free area that they could find.  There were British, Danish, U.S Marine and Afghan Army camps within Bastion’s eight square miles.  Thirty thousand people lived in what was called “the safest place in Afghanistan,” for its  multiple layers of electronic, physical, and human security.

Soldiers routinely ran for exercise on paths just inside Camp Bastion’s outer walls.  Why not? Bastion was a safe and busy place, with the hospital, a large airport, gyms, bars, public utilities and a police department, total Internet access and yes, Pizza Hut.

But things had changed.  By the time this tee was printed and this race was run, the 46th had pulled out of Camp Bastion; NATO operations in Afghanistan were starting to wind down.  After most of a decade of trying to stabilize a country that wouldn’t be stabilized — most Afghans had little reason to love their corrupt, Western-backed puppet government — the West was getting out.

Camp Bastion wasn’t even “the safest place in Afghanistan” anymore.  Its very existence and reputation goaded the Taliban into a suicide attack the year before this benefit run. A force of Taliban breached Camp Bastion security, blew up aircraft, and killed several people in an hours-long firefight.

By 2014, a year and a half after this tee was printed, NATO was out of Camp Bastion.  By 2016, most of Camp Bastion had been demolished and carted away except for one section still occupied by the Afghan Army.  And the miles of walls, and a few buildings that nobody cared about.

By 2018, the Taliban controlled half of Helmand Province and was on the rise thoughout much of Afghanistan.  The U.S. accepted “peace talks” with the Taliban in 2019 to find some compromise peace plan that would bring harmony to Afghanistan. Then President Trump decided to cancel them.

So, what was that all about, those 14 years in Afghanistan? All the money and the death and superhero PJs and Pedros in the sky, and international cooperation?  Stand outside the derelict walls of Camp Bastion, and perhaps Shelley would come to mind:

Nothing beside remains. Round the decay
Of that colossal Wreck, boundless and bare
The lone and level sands stretch far away.

What are we doing in the world? Or to the world? Really? And for who?

Meanwhile, the 46th is off somewhere unnamed — probably Iraq —  heroically supporting Operation Inherent Resolve, the campaign against ISIS and in aid of rebel forces in Syria.

I wonder how Operation Inherent Resolve will turn out, in the end; according to the latest news reports, possibly not any better that things did at Camp Bastion.  The Guardians can’t rescue us from Washington.  Or Wall Street. Or ourselves.