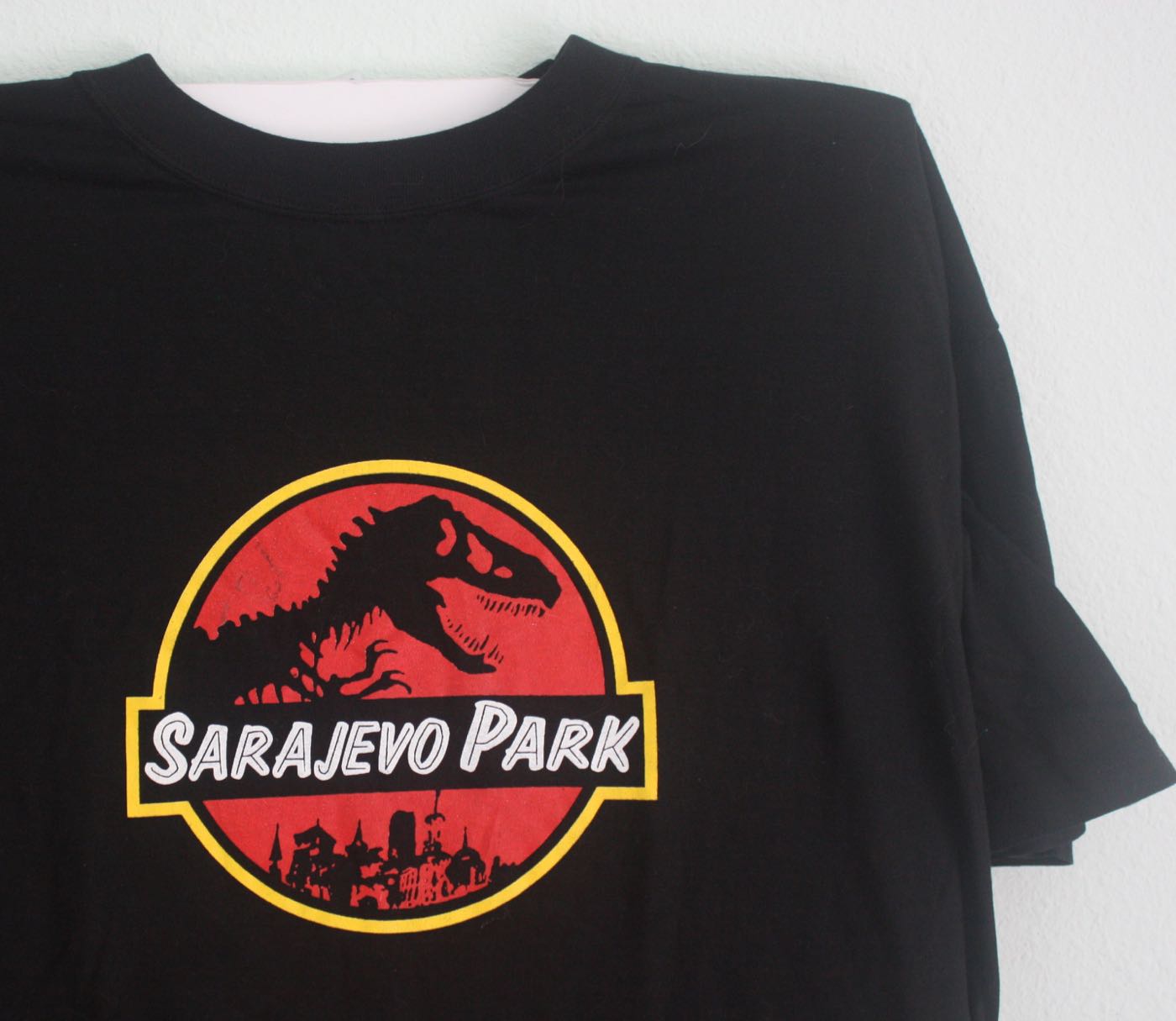 The city was under siege, cut off from the outside world.  Day after day, year after year, shells rained down on it from enemy artillery in the surrounding hills.  Enemy snipers brought fire on anything with two legs.  People died and buildings fell, every day. Municipal services were in shambles, civic order tenuous at best. Wherever you looked you saw damage.

The citizens carried on. Some fought back with guns. Bu some fought with art.

This was Sarajevo, capital of Bosnia from 1992 to 1996: under siege by Serbian forces for almost four years during the Bosnian War, a conflict so complicated that even Wikipedia’s synopsis made my head explode.

For most of the siege, Sarajevo got no international help at all. So a  Sarajevo graphic design collective called Trio, with very little left to design in a besieged city with few resources, produced a series of darkly humor postcards that injected the name “Sarajevo” into well-known icons of art, film, and advertising.

Trio’s message to the world was: “Don’t forget Sarajevo!  We’re still here!”  They wanted the world to think of Sarajevo whenever it saw the familiar symbols.

Trio’s secondary message was, “Bosnian humor is dark as hell.” Besides “Sarajevo Park,” the design collective produced “Enjoy Sara-Jevo” (a redesigned Coca-Cola label), “The Sarajevo Zone,” (a “Twilight Zone” parody), a bullet-riddled Andy Warhol Campbell’s Soup can (renamed “Sarajevo’s Chicken and Rice”),  a classic Uncle Sam who “wants YOU to save SARAJEVO,” and dozens more.  Search for them; they’re very effective.

The designs got out of Bosnia as postcards and posters. They spread across the world. They won approval from leading art critics and the international media even as the siege continued.

The Trio group didn’t produce my “Sarajevo Park” t-shirt, or any t-shirts. The t-shirt is an American brand, and the lettering is slightly different; it’s probably unauthorized. Online, I can’t find any graphic of it except on my own site.

But the message remains — perhaps not “Remember us!” anymore.  But certainly, “Don’t forget!”