I’m very proud of my art collection: not the one I share with my wife, though. “My” collection is on the wall in my garage/man cave: artwork entirely thrifted from Goodwill Industries. Total cost: less than $40. But I’ve visited commercial galleries whose art pleased me less. 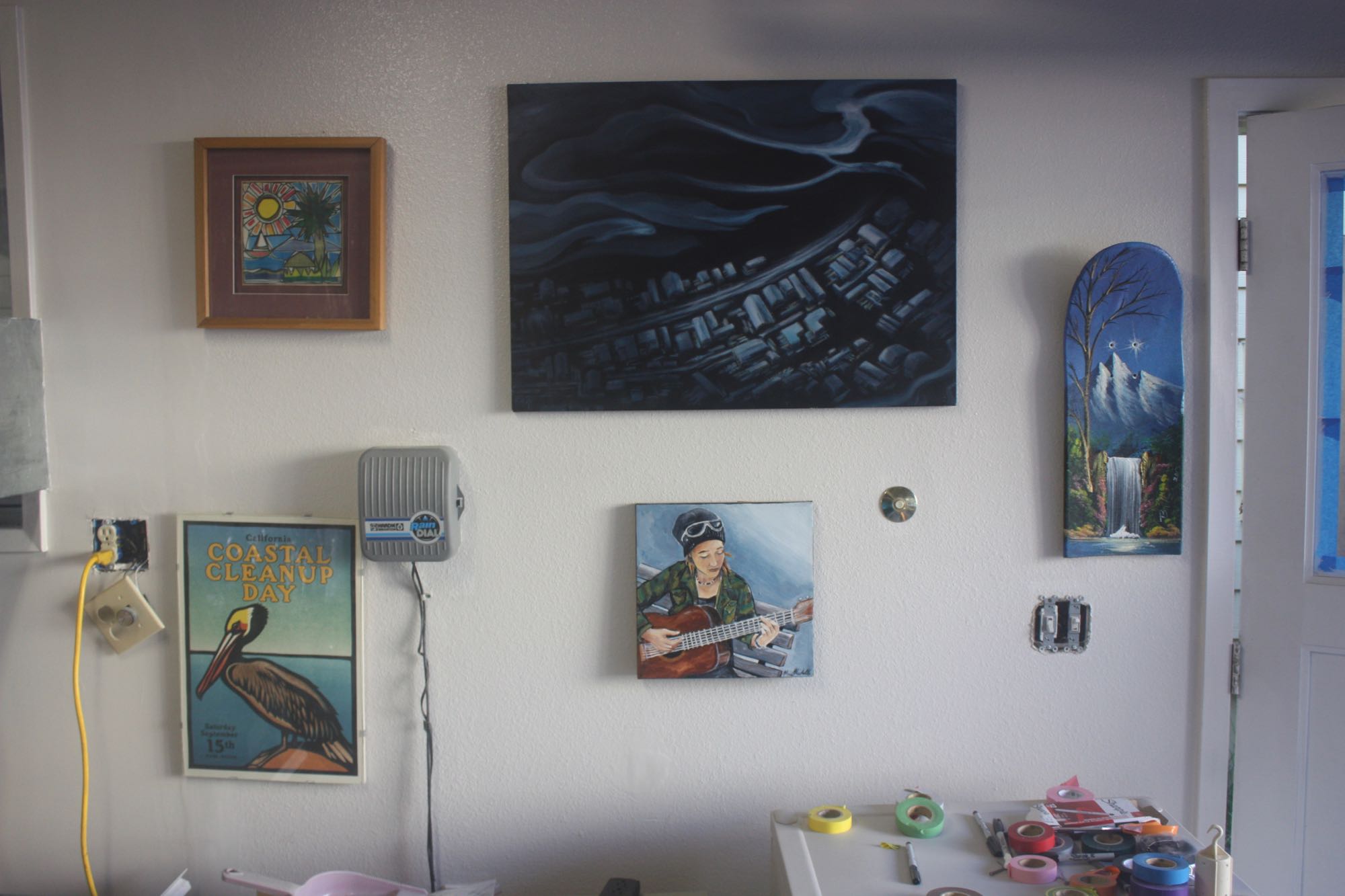 You shouldn’t find original, competent paintings at a Goodwill for $2.99 or a little more. But in this town, sometimes you do. Sometimes for less. 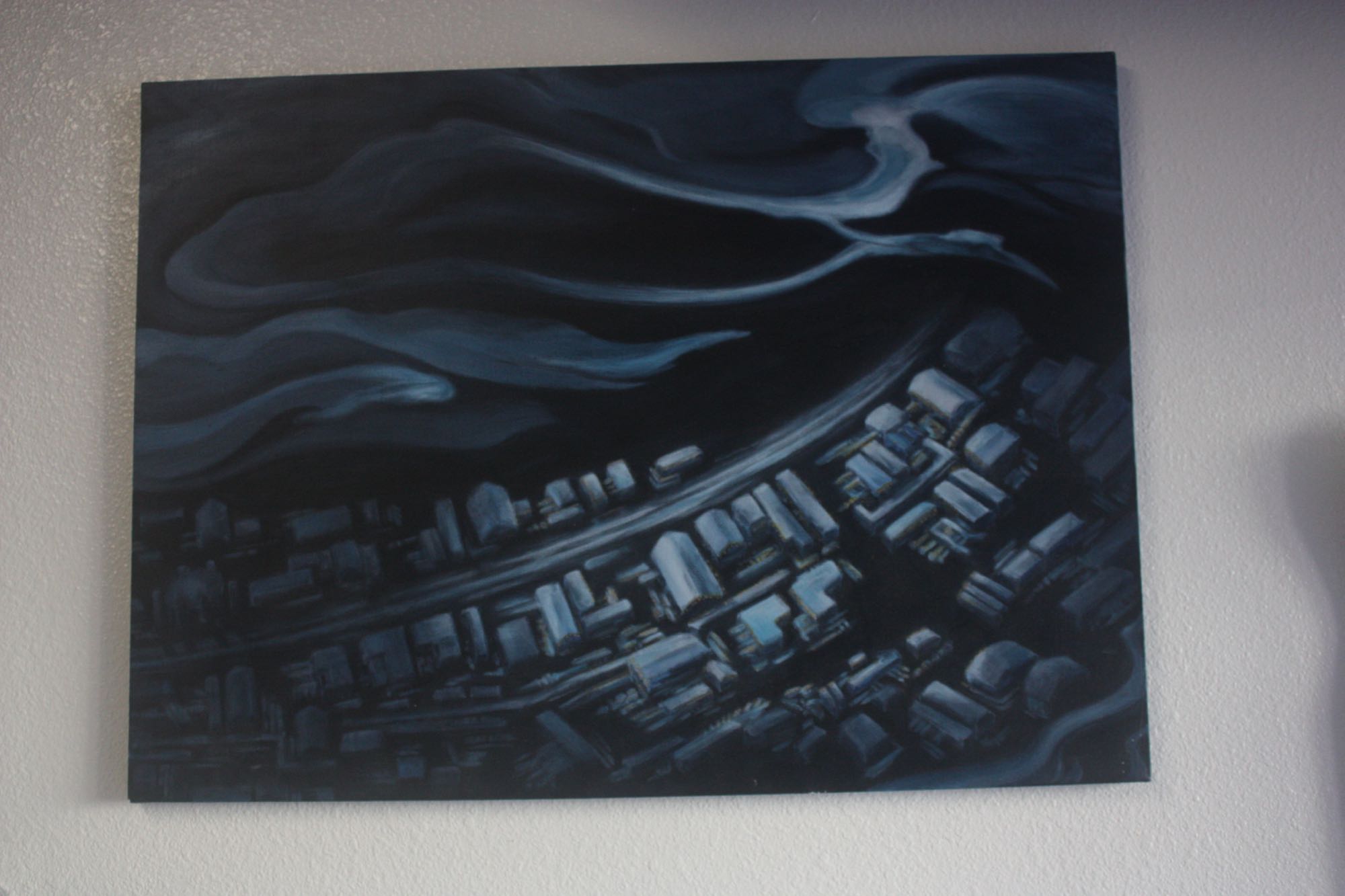 My favorite is a panoramic painting of a small town at night as darkness takes command and the fog rolls in. I lived in San Francisco’s Richmond District for several years: the foggiest part of a foggy city; I identify with darkness and fog. I also appreciate that tthe painter made a realistic vista into an array of almost-abstract shapes. 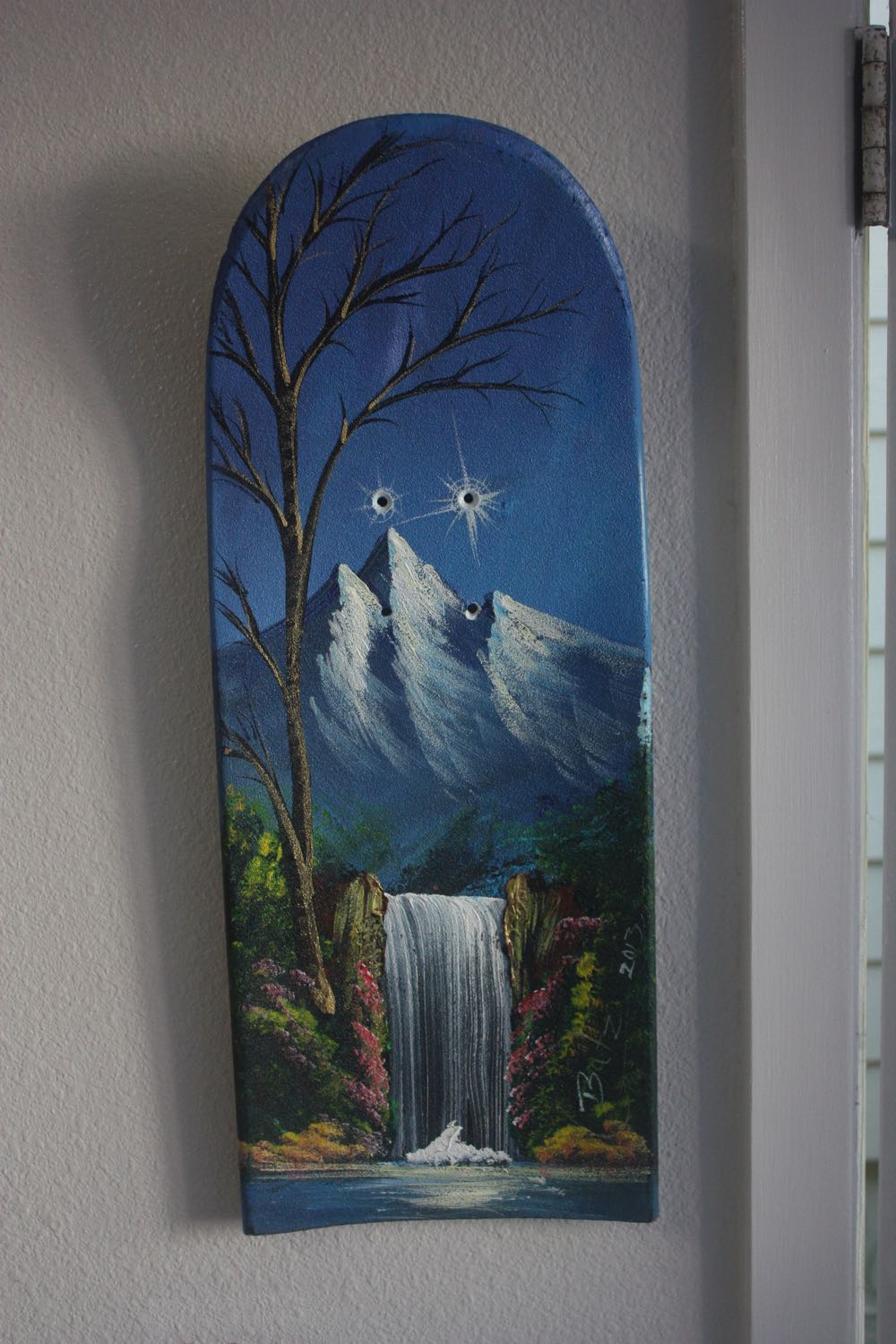 My second favorite is a mountain landscape painted on a broken skateboard in the style of PBS painting maven Bob Ross. It’s not great art, but it drips with cultural references and honest kitsch.  I also like the way the artist adapted two empty bolt holes (they had attached the board to the wheel trucks) into strange stars on the horizon; and hid the other two bolt holes in the composition.

And then there’s a pleasant portrait of a young guitarist, and a vintage, original poster by a well-known English woodcut artist. 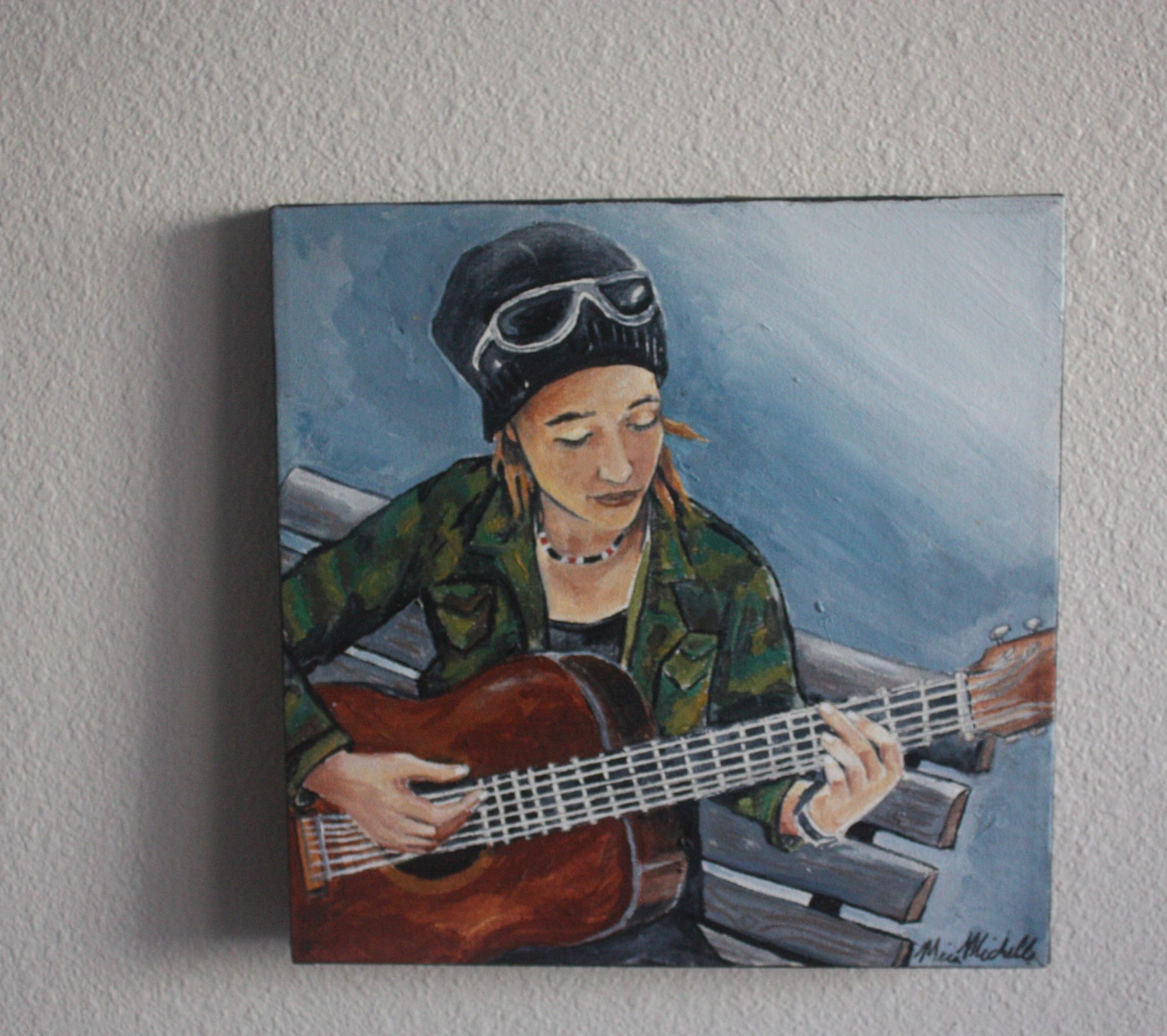 Oddest of the bunch is a strange but somehow pleasant tropic scene composed of black lines filled in with shaped pieces of colored paper tape, and maybe some marking pen. It’s not great art by any standards, but somehow I just keep looking at it. 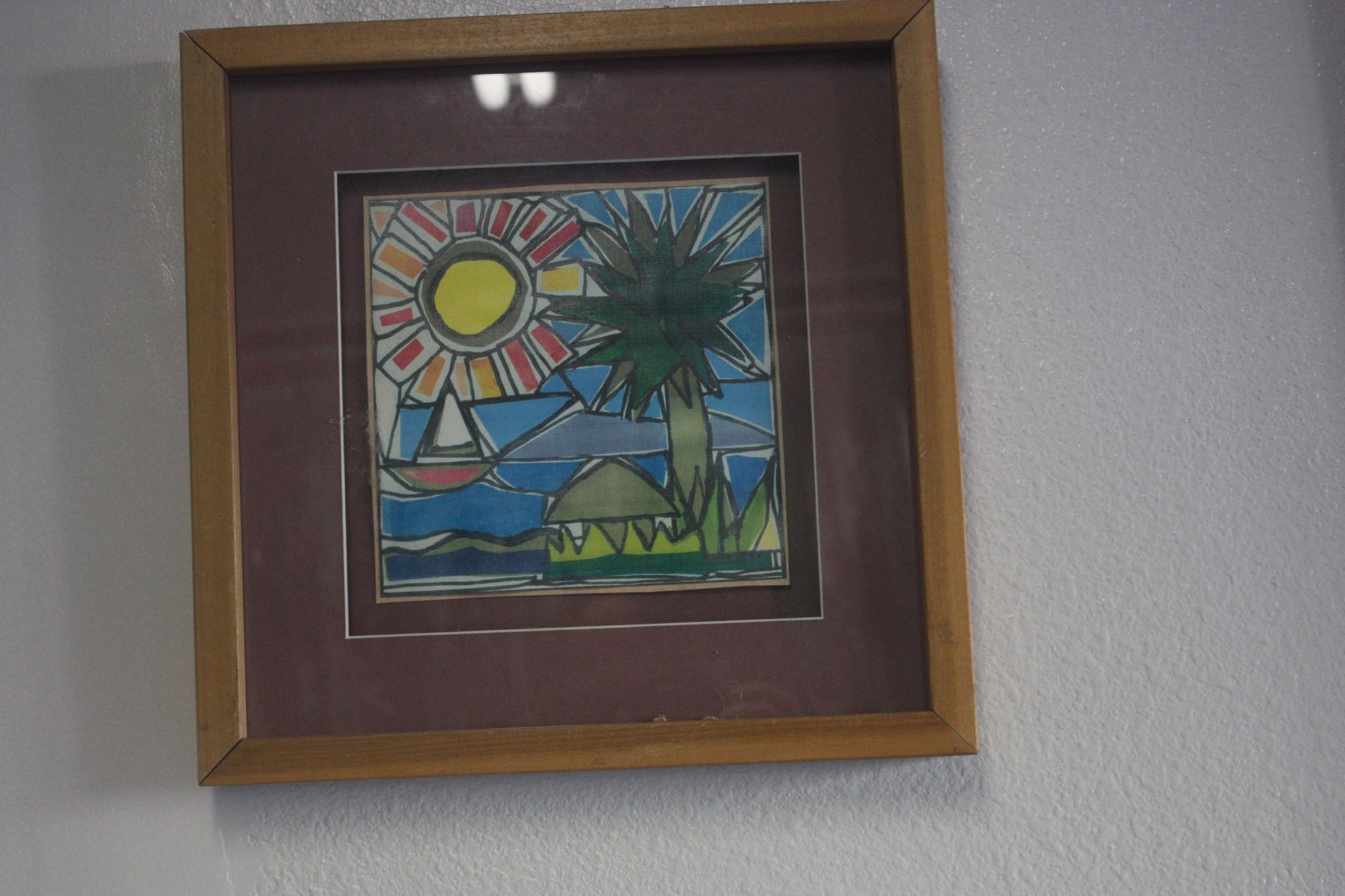 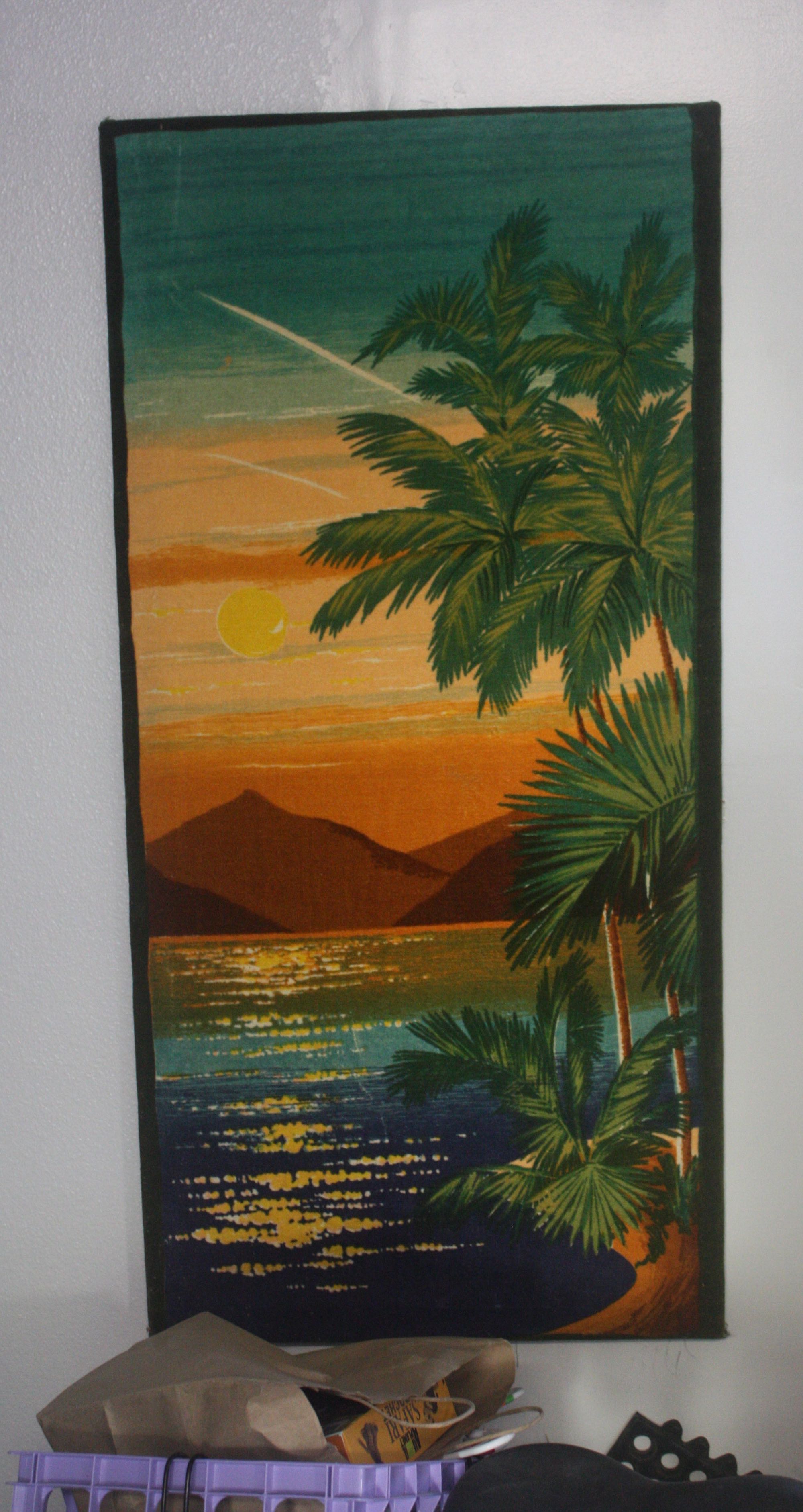 Other art scatters across the walls, including one piece that my wife Rhumba commanded me to buy: a Hawaiian sunset painted on velvet. No man cave can lack one truly cliched work of low art, she argued. I have to say: it’s far superior to “Dogs Playing Poker.”

I could amass this not-bad selection so cheaply because Santa Cruz, my town, is up to its neck in original art. Everyone’s a painter here, or seems like it, or dreams of it. They can’t all be good at it — believe me — and it stands to reason that the dross would end up at Goodwill. And it does: oh so many bad paintings. If that’s your style, come on down to 204 Union St. There’s a good coffee house down the street when you just can’t take it anymore.

But among that dross you find jewels: something that someone just got tired of looking at, perhaps, and donated. Or that that their heirs donated while disposing of the estate.

I do wonder where the art came from, and sometimes I can find out. A college art teacher — a freeway flyer who teaches at multiple schools — painted the midnight city. Realism-into-abstract is her specialty.

Another local painter, who has a website and probably also a day job, painted the pensive guitarist. Is it great art? No, but it’s simple, pleasant, and has a point of view. I’m all about the point of view.

Very occasionally, I see art at Goodwill signed by people I actually know. And I will never tell them.

As for the skateboard/landscape painting, somebody told me they’d seen a display of them on sale at a gas station, back aways in time. That may be all I ever know. 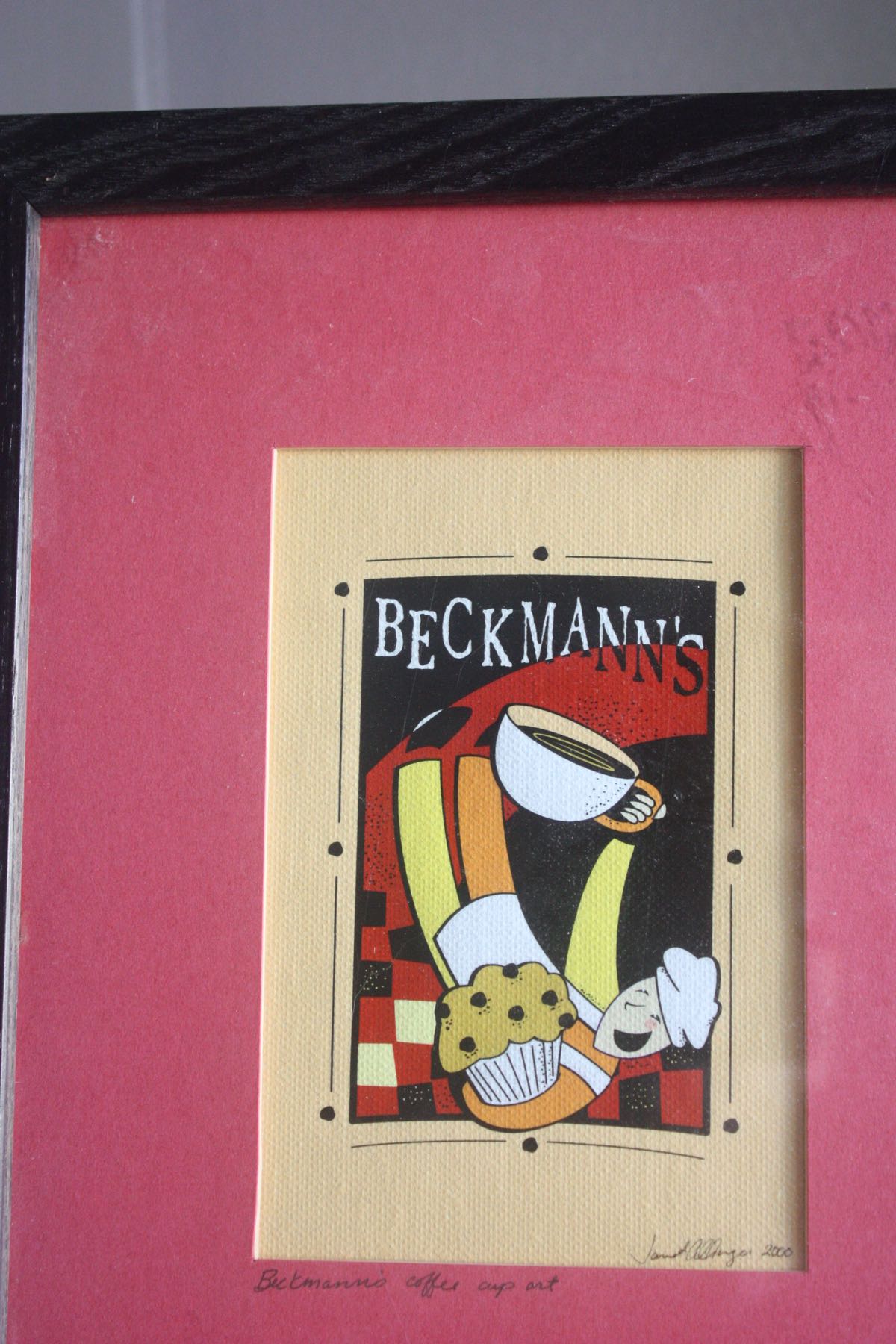 The source of all this artist endeavor lives decades in the past. When Santa Cruz was a cheap, beautiful hippie haven, artists came here for the beauty and easy living. Money could be made drawing for our surfboard and skateboard industries, too (and still can). But even if you didn’t do that, you could hump your work over the mountains to the big city and try to sell it there.

Some artists still do — they live here, but their markets are elsewhere. On our walls hang some funny-animal paintings by a guy who illustrates children’s books for Scholastic. I also remember walking into a stationery store where the owner sat at the front counter: drawing a page of Archie Comics.

Santa Cruz’s beauty remains, if not cheap. It is, in fact, hellishly expensive. But a university was founded here, with an Art Department, and people to teach art, and students to learn it; and when the students graduate, they don’t all go away, or at least not for a few years. They like it here.

For all these reasons, Santa Cruz is pre-loaded for artistic endeavour. This little shelf of land between the mountains and the sea, home to perhaps 100,000 people, boasts three competent and well-stocked art supply stores.

Because, aside from the groups that I’ve mentioned, Santa Cruz is home to well-off people with time on their hands. Lately they’ve  mobbed the place: people who made big money in Silicon Valley or San Francisco, but aren’t all that impressed with themselves. They were just grubbing for money with the rest of the predators; there had to be more to life. And now in Santa Cruz, in the leisure that is their reward, they search for that “more.” 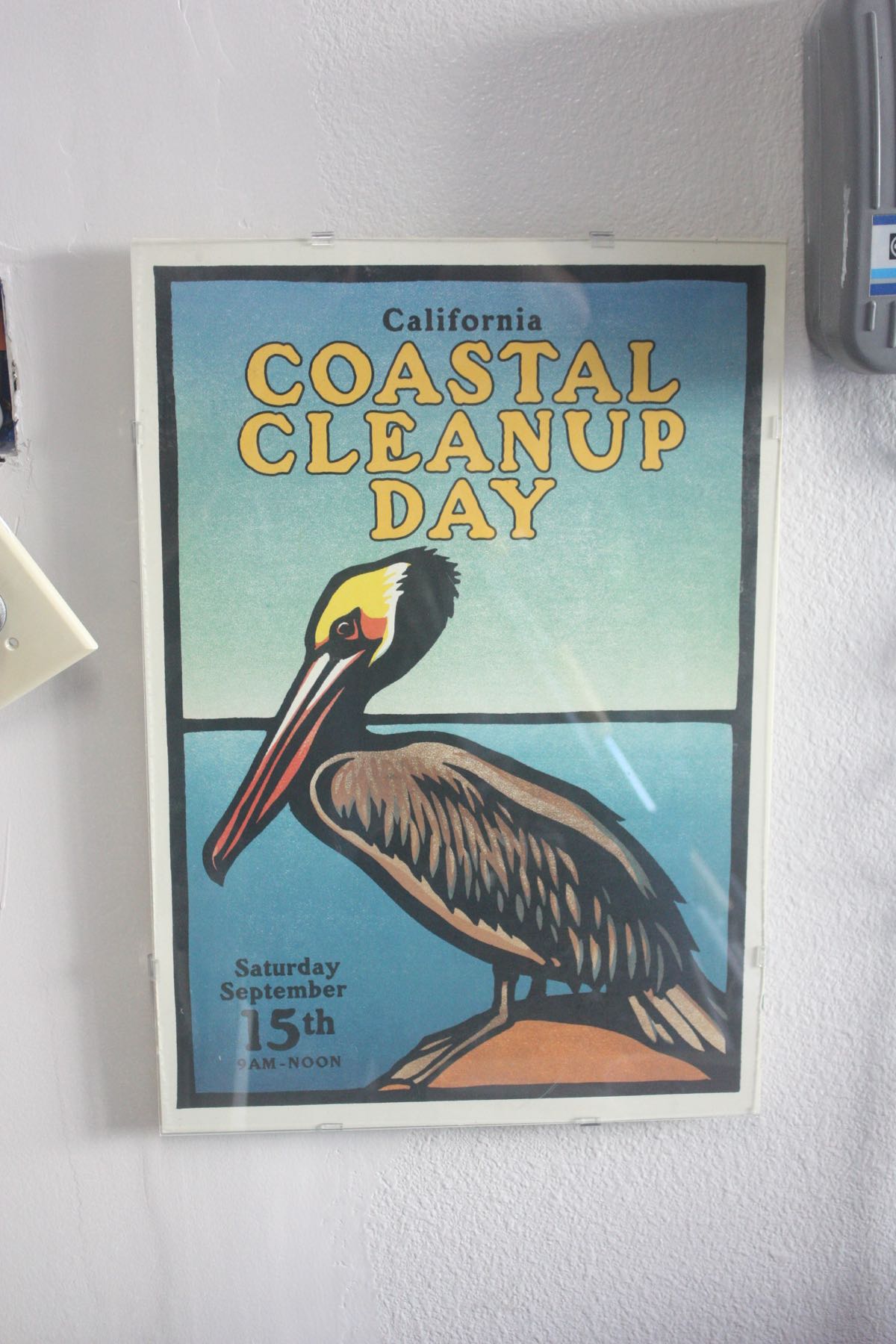 Another print on the wall: a vintage California Coastal Cleanup Day poster from about 30 years ago, by the British printmaker Christopher Wormell. Cleanup Day is descended from earlier events staged by Santa Cruz-area surfers.

That’s why I think that you can find a well-built artist’s studio behind so many custom-built Mediterranean-style villas around here. I tour these studios during an annual event called “Open Studios” where people visit artists’ workplaces, inspect their output, and perhaps buy some. .

Some of these gold-plated aspiring artists are dabbling; others truly chase the white whale. Which they may never catch. You may shake your head, but you’ve got to respect it. And maybe, as with Ahab, the chase becomes everything.

Here’s a story: on the first Friday of every month, businesses and restaurants and galleries open for the evening and each displays the work of some local artist(s) of their choice. Some hire a band and offer food and refreshments, some don’t. It makes a nice excuse to roam around town, look at art, and drink a beer.

One Friday, Rhumba and I stopped wandered into one of these spaces, a restaurant.  The walls of three rooms were literally covered with hundreds of acrylic paintings, all from one artist.

And most of them were bad. The artist struggled with perspective. His lines were too heavy: some of then looked as if he chiseled them in. True, the prices were super-reasonable. But most of the work shouldn’t have been shown.

We gently asked the restauranteur, an acquaintance, WTF? And she introduced us to a six-foot-tall, 13-year-old girl with braces. Who told us a story.

Her parents had just purchased a house from a wealthy man who pursued painting as a hobby. He took lessons for years, and painted for years. Then he left town for the Sierras. An agent sold the house for him.

When the girl’s parents took possession, they looked into the far corners of the basement for the first time and found 500 paintings, some as large as three feet by four. Five hundred reject landscapes. And yet the artist kept going. And going.

I can only hope that he painted 600 or 700 paintings, and took the best ones with him. But we’ll never know.

Anyway, the parents had given their 13-year-old full freedom to try to sell the paintings for valuable life experience and, hopefully, some cash. Hence this large, strange exhibit hosted by a restauranteur who was a family friend.

Rhumba and I like an art bargain, and we’re pretty good at finding them. So we scrutinized every one of those 500 paintings to see if even one was worthwhile. A few were; I think the artist had had a few good days, or really did improve as he went along. We finally settled on a watercolor: 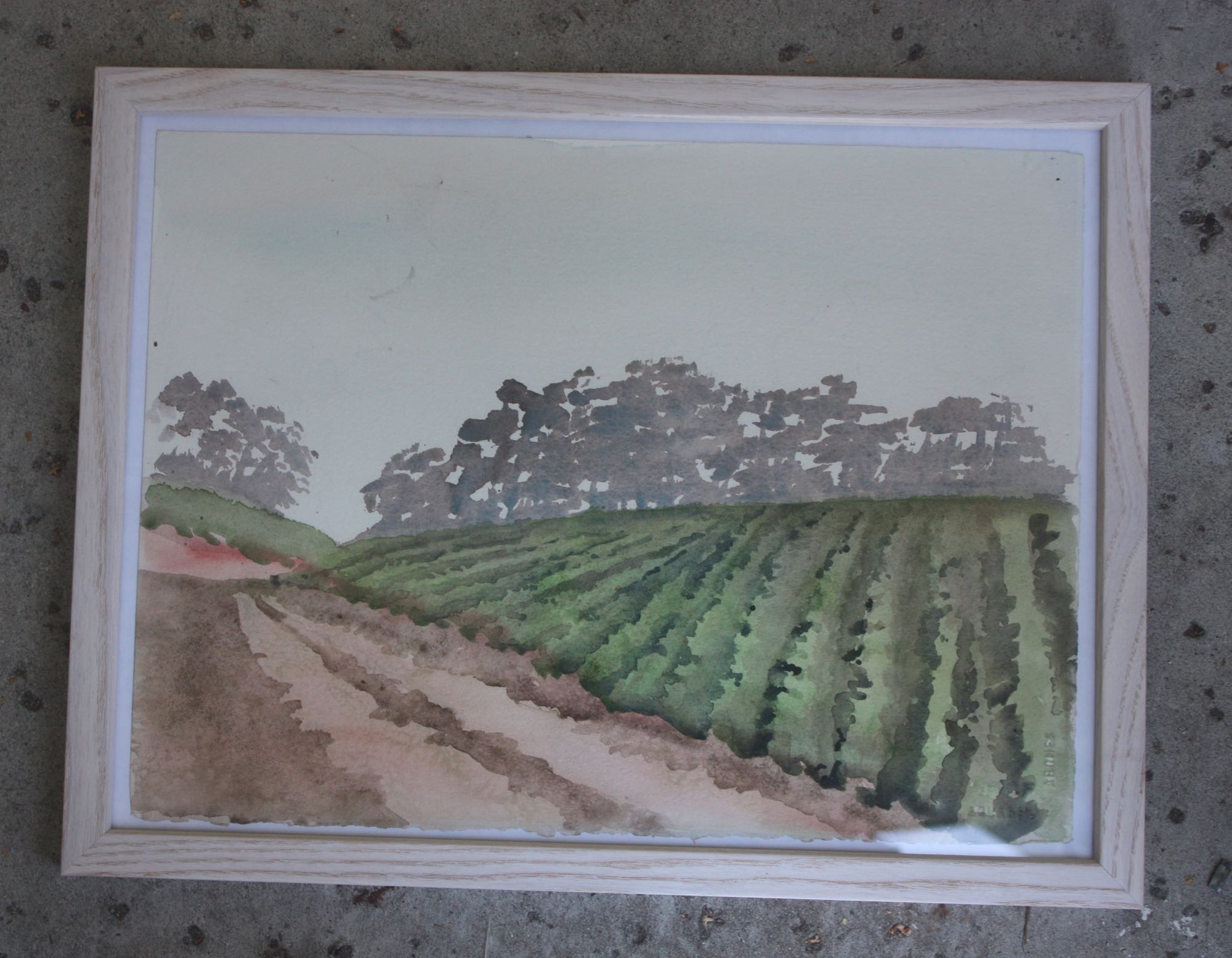 By the time the artist had painted this one, his lines and perspective were almost under control. The painting is of a road my wife and I could very well have walked down: a sandy farm road through coastal artichoke fields, with a windbreak of eucalyptus in the background. It’s a classic Central Coast tableau, yet one rarely painted.

It’s not “pretty.” But if you’ve lived in these parts awhile, you have that painting in your blood: the sandy soil, the eucalyptus; the smell of salt and a white sky full of marine mist. You know that the ocean lies beyond the distant trees.

Fifteen dollars? Sold. It may well have been the only painting sold that night. We got it a cheap frame. It hangs in our bedroom. We like it. Somewhere out there the artist still chases his whale, perhaps, and you know? He could be closing in on it.

Out in the garage, my thrifted art collection slowly grows. Hodge-podge as it is, I have a true fondness for it. You can talk of good work or bad, good technique or amateur bungling; but the personal connections I make through art are what really make it work for me: the remembrance of dark fog flowing in over neighborhoods, or of hiking down dusty farm roads, or of pretty girls playing pretty music with solemn gravity. And sometimes, a certain mix of colors and proportions alone are enough to make make some aesthetic center in my brain go “Sproing!”

The ten thousand artists of Santa Cruz County keep painting. Perhaps someday, even if by coincidence alone, they’ll come up with something right for you. And if you find it at Goodwill? Don’t be a snob.

2 thoughts on “My All-Thrift-Shop Art Gallery”