You’re on a two-lane state highway far, far out in boondocks. There are hills, there are trees, there are farms. There may be an ocean. There isn’t much else.

But around the next turn lies a loose group of buildings scattered across both sides of the road. There may be a simple city limits sign. The “town” has no government and no particular facilities.

What you can hope for is small grocery store, perhaps with gas pumps. And if you’re in tourist territory, that grocery just might have a deli, and a t-shirt. The Albion Grocery has it all. 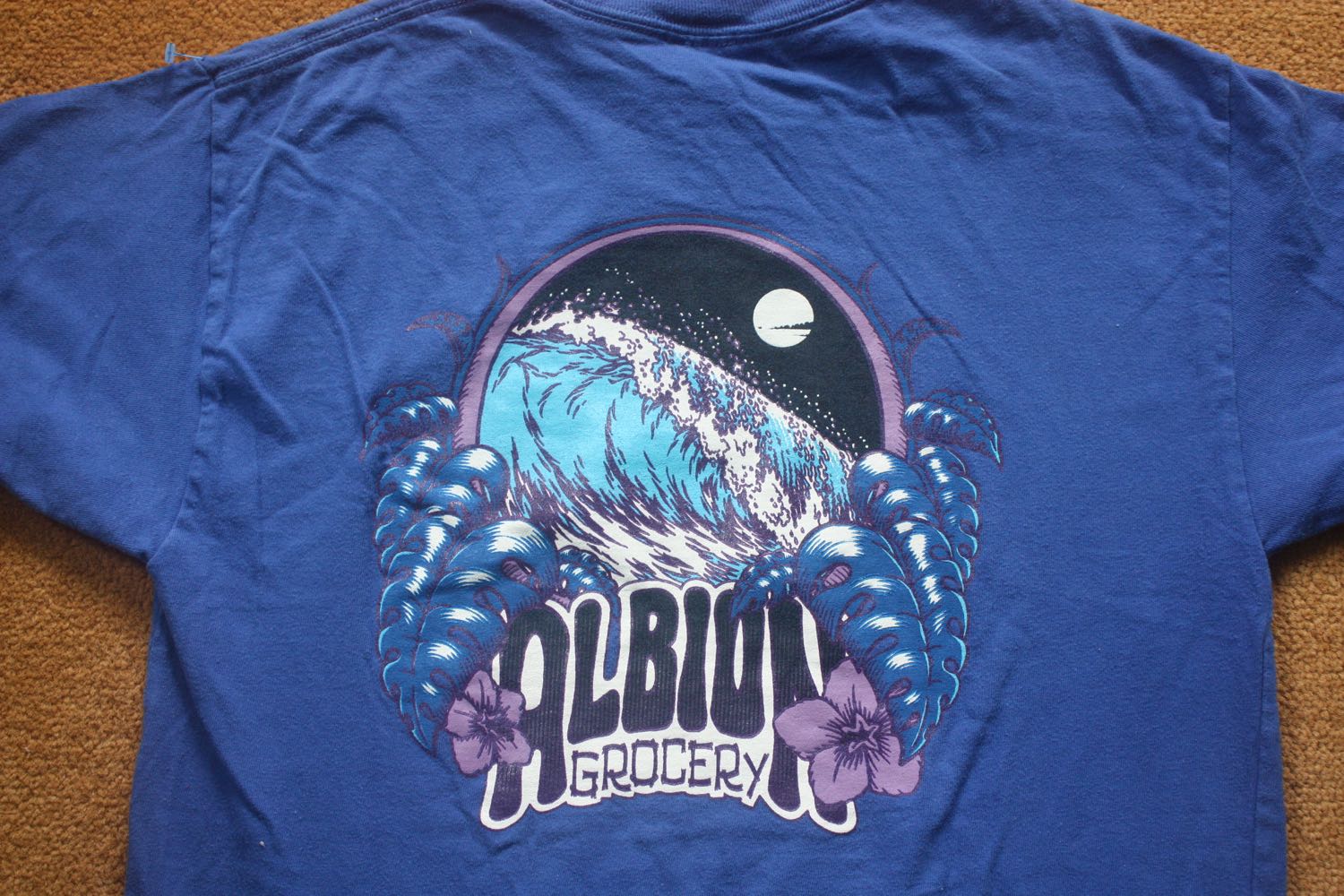 Albion is a small unincorporated community on Highway 1 along California’s North Coast. The North Coast is noted for natural beauty, a dramatic and rocky shoreline, and giant waves that eat people.

The locals call them sneaker waves. A set of average waves approaches the coast, one after another, but in the heart of the set sometimes lurks a monster that will shoot far up the beach, knock your feet out from under you, and carry you back out to sea in its cold, cold arms. If you are unprepared.

Smart locals never turn their back on the waves. The only defense against sneakers is to run inland when you see one coming.

Pretty split-leaf philodendrons and hibiscus frame the t-shirt’s central image, a wave. But that wave is no pretty tourist image. It’s a spitting, rearing sneaker wave.

Fear it. I’m sure the locals do, while being slightly proud of their sneakers at the same time. Sneakers define the North Coast, like wind and crazy rocks and grim beauty. And they’re something bad-ass that you can tell strangers about.

Farther north in Oregon, coastal dwellers also speak of sneaker waves: certainly they do in Tillamook County, “Home of Cheese, Trees, and Ocean Breeze.” Tillamook is hunting country; deer and elk roam in the plentiful forests. Inland among the trees on the standard two-lane highway, the tiny unincorporated community of Beaver achieved something nearly unique: a combination firearms and grocery store. 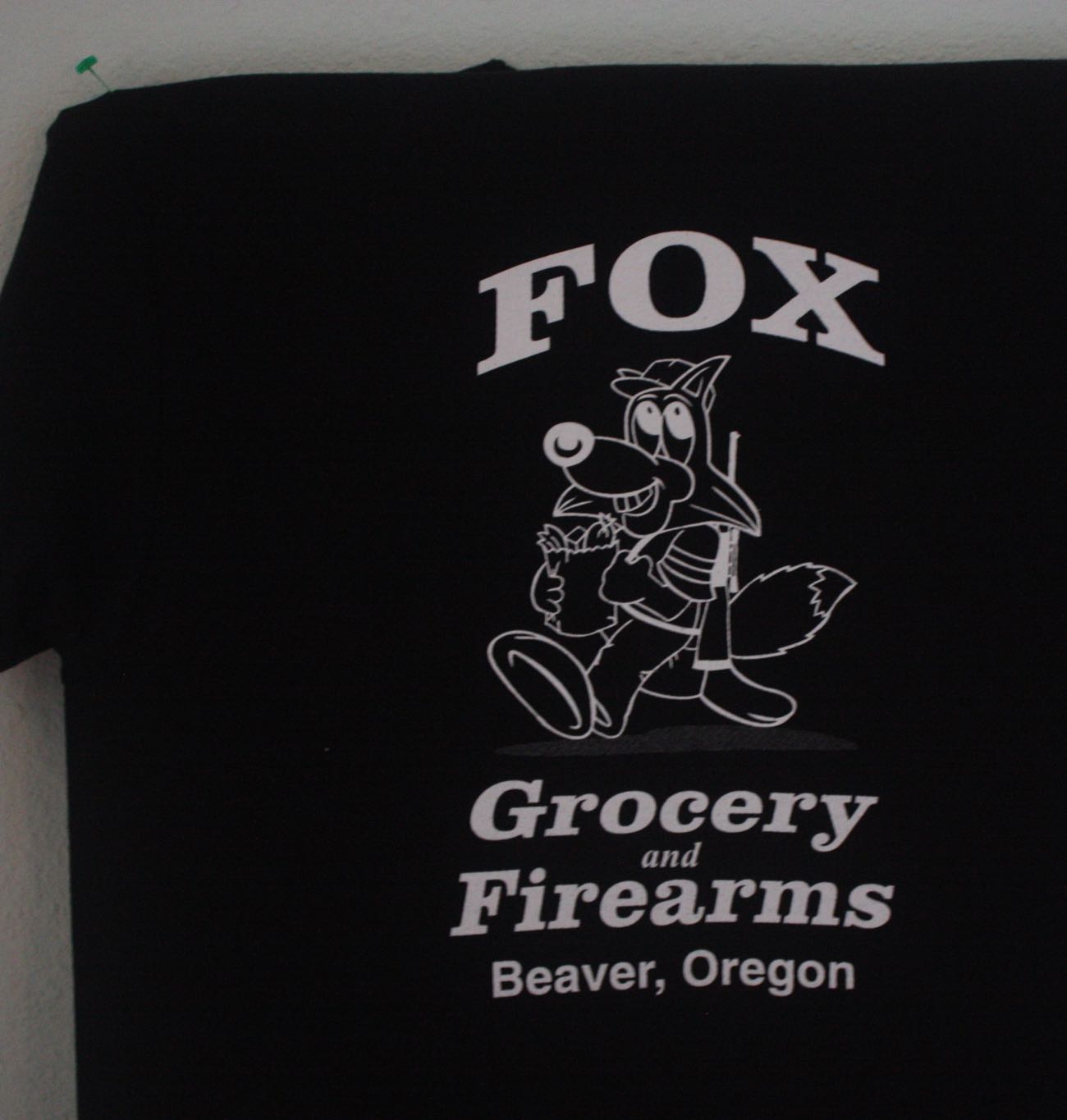 Beaver is literally surrounded by huntable forest; the people need their guns and ammo. And there are no other groceries right nearby, either. At 150-ish people, Beaver might not support both a grocery store and a gun shop. But two in one? That worked. The Fox family ran Fox Grocery and Firearms for 47 years.

The family sold out in 2016. The new owners changed the name from Fox Grocery and Firearms to Beaver Firearms and Grocery: a subtle change in emphasis. The new owners’ Facebook page says, “Come see us today for your grocery and 2nd Amendment needs in one convenient place.” But some locals complain that groceries are being shorted in favor of guns. All I know is, there’s no t-shirt.

The third and final t-shirt also comes from another unincorporated community:  but one of 20,000 citizens. Isla Vista, California, is a frowsy college community adjoining UC Santa Barbara. And the ocean, and a beach. Sneaker waves aren’t common. You see the possibilities for young college students on their own for the first time in their lives. It could look like Paradise. 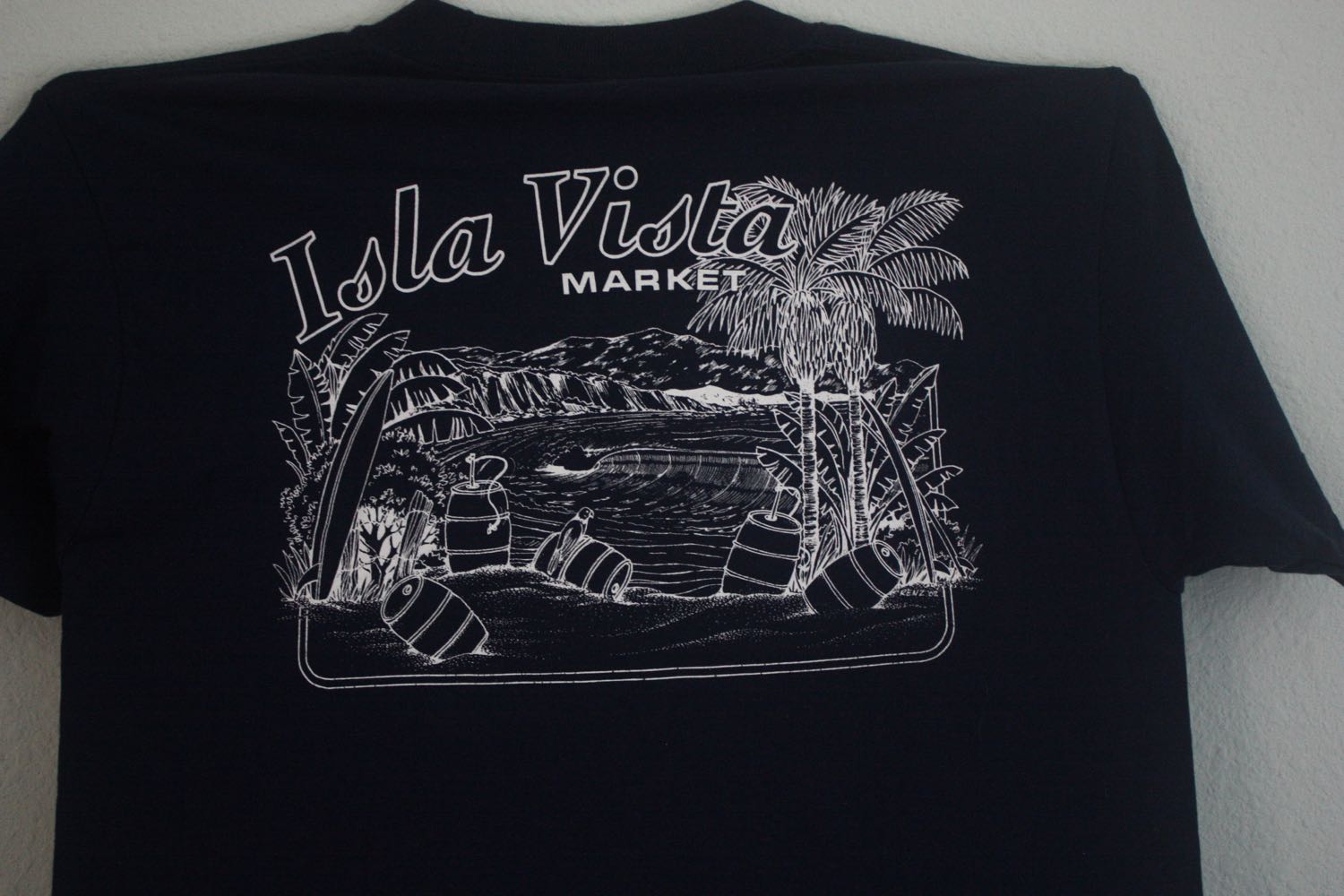 But there are liabilities, too. A hodge-podge of developers built up Isla Vista quickly and cheaply after the university was founded. The streets need work, the sidewalks come and go, there’s nowhere near enough parking. And while Isla Vista can boast a zillion cheap college town restaurants, it has only one full-service grocery: Isla Vista Market.

Isla Vista Market offers all the usual groceries: and keg beer. Lots and lots of keg beer. A good business gives the customers what they need, and through its t-shirt Isla Vista Market proudly accepts its role as keeper of the keg to the ten thousand students of the community. And their parties. Of course it accepts their money, too.