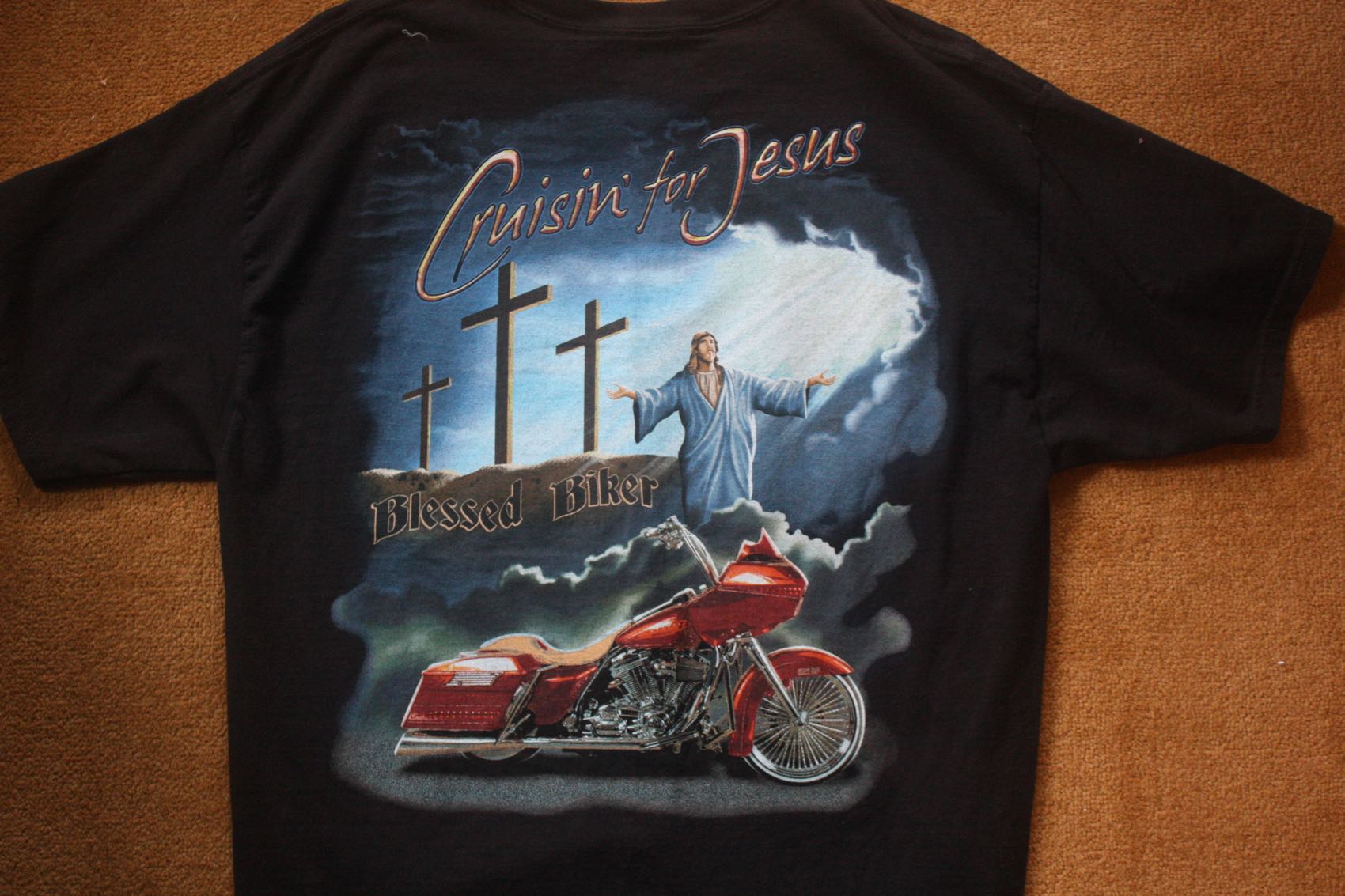 I track a number of recurring t-shirt themes, and one of my favorite is “Motorcycles and Jesus.”  You might not link the Man from Nazareth with vintage Harley panheads or late-model Kawasaki Ninjas.  But some people try to make it happen: on a t-shirt, at least. 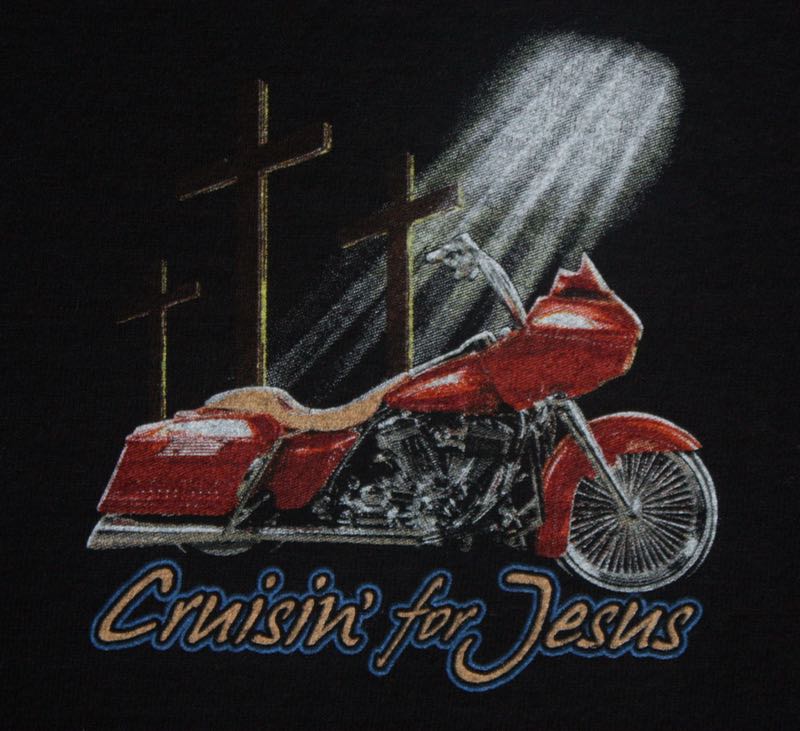 “Cruising for Jesus” is a pretty common tag line for shirts like this: that somehow you’re serving the Lord by rocketing down US 101 at warp speed on a $30,000 bike.  Maybe you are; but somebody needs to explain it to me. “Cruising for Christ” is a popular saying on hot rod tees, too — often related to a particular religious car club, or to a particular church.

You also find tees for “The Blessing of the Bikes,” an outdoor blessing ceremony that takes place at churches across the nation around May, just before summer cruising season starts.  The blessing is for the rider’s well-being, not just the motorcycle’s.  And yes, the miinister usually blesses each bike and rider individually. It’s an endurance job, because hundreds may attend. 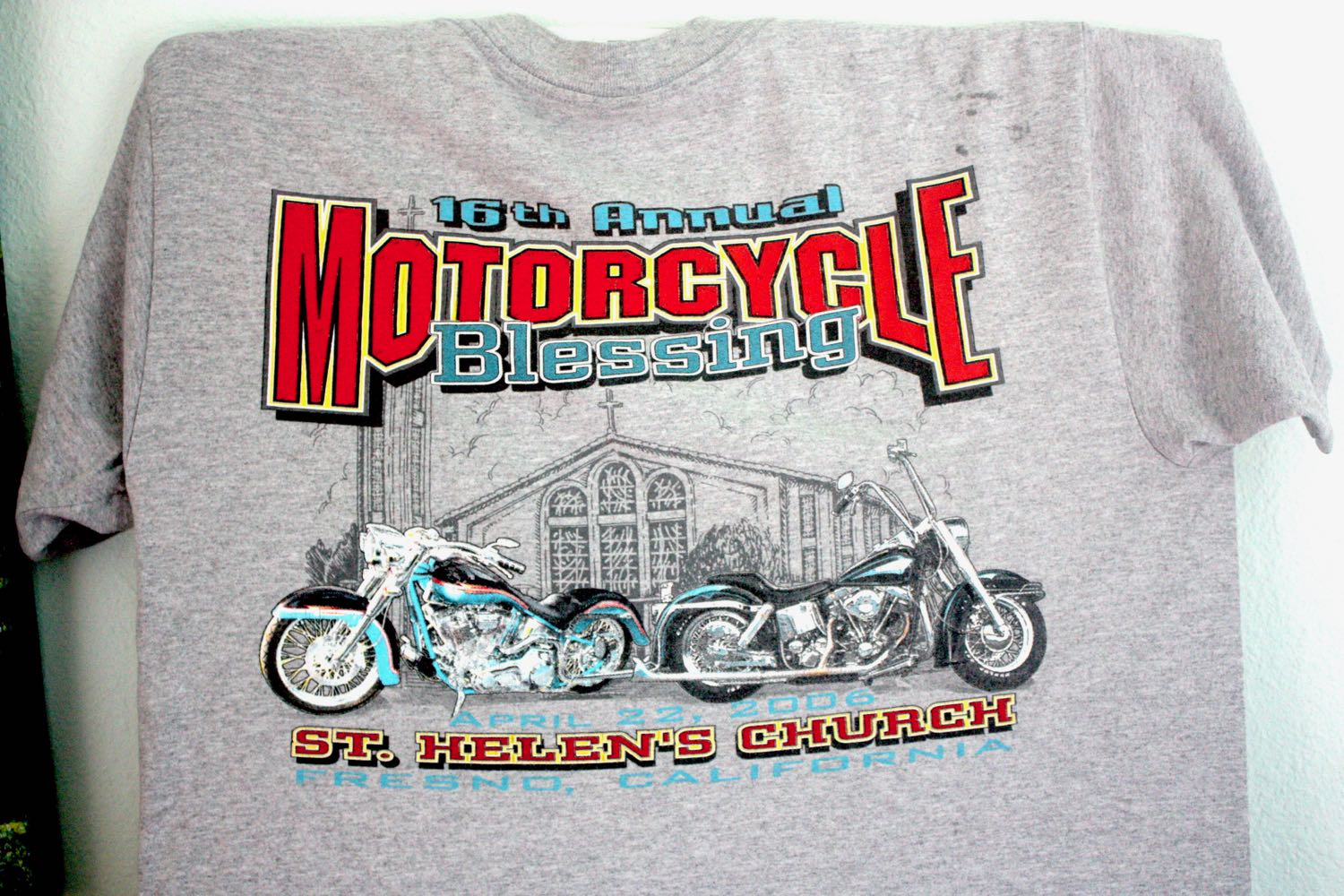 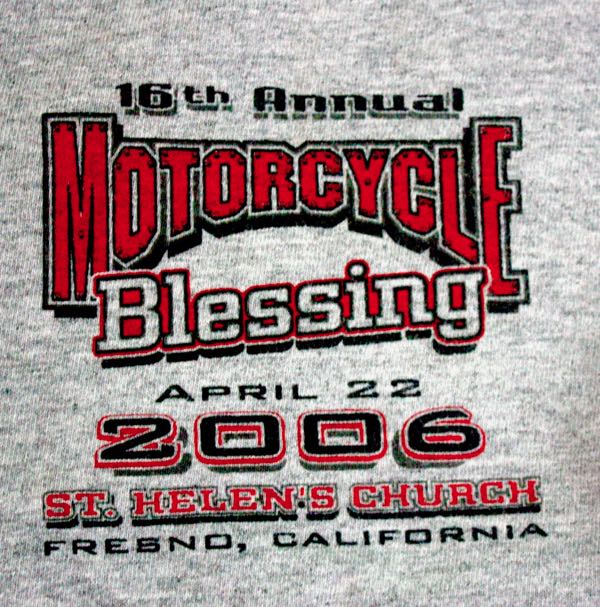 “Blessing of the Bikes” ceremonies are non-denominational — just show up, Believer or not — but there’s usually a lesson, maybe a short sermon, and a sprinkle of holy water if you’re at a Catholic church or something similar.  The custom dates to 1999, when St. John’s Cathedral in New York City staged a “Blessing of the Bicycles” ceremony, which it still holds annually.  “Blessing ceremonies” can be for motorcycles, bicycles, or both, but most cater to motorcyclists.

You can find videos of “Blessing” gatherings on YouTube, and many of the bikes are pretty plush.  But since the blessing is really about rider safety, I won’t complain.

Much less seriously — and with contempt — do I treat “The Blessing of the Cars” tee from at a ritzy car show run by the Knights of Columbus at the Carmel Mission in ritzy Carmel, California, where Clint Eastwood was once mayor. 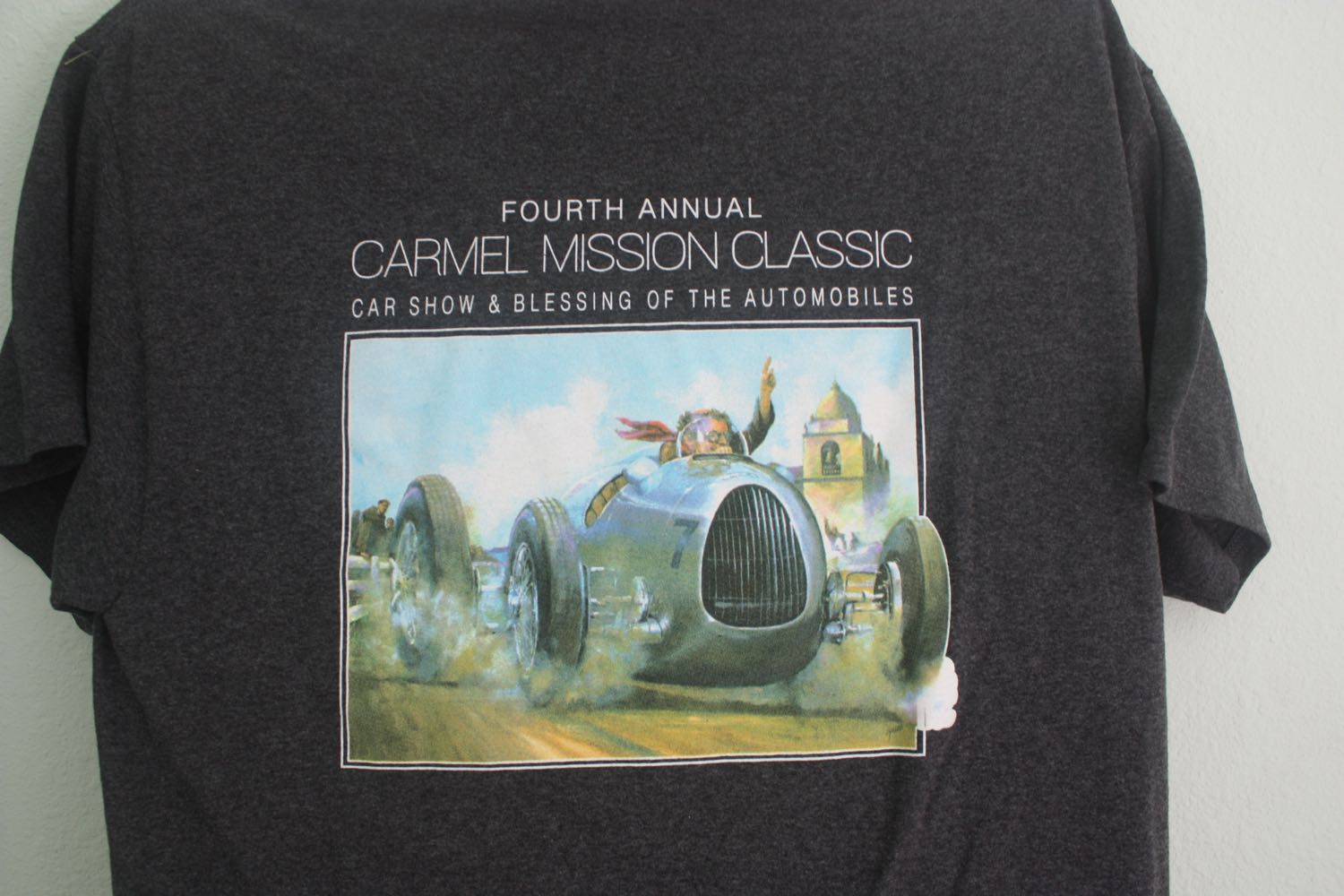 As a stunt at the Carmel Mission Classic car show, the Bishop himself comes by and blesses $300,000 (and up) collector’s cars owned by extremely wealthy individuals. If you want to decode the t-shirt, that’s the bish in a classic Italian racing car zipping by the mission with the Holy Water in one had while hurling blessings with the other.

And now your Bugatti is One with the Divine.  It’s a fund-raiser for some kind of good causes, but can I say it?  Crass. Very crass.

My personal opinion: if some church wants to bless a car in a way that really matters, hold a ceremony called “The Blessing of the Beaters.” It would serve all the people with battered old cars who desperately need them to hang together: to get to work, to get to school, to run their business.  Because they are too poor to pay for repairs, much less get another car.

A priest sprays a little water on your ’94 Chevy Corsica and prays that it last another year? That’s a blessing that many would like to have.

But back to motorcycles: 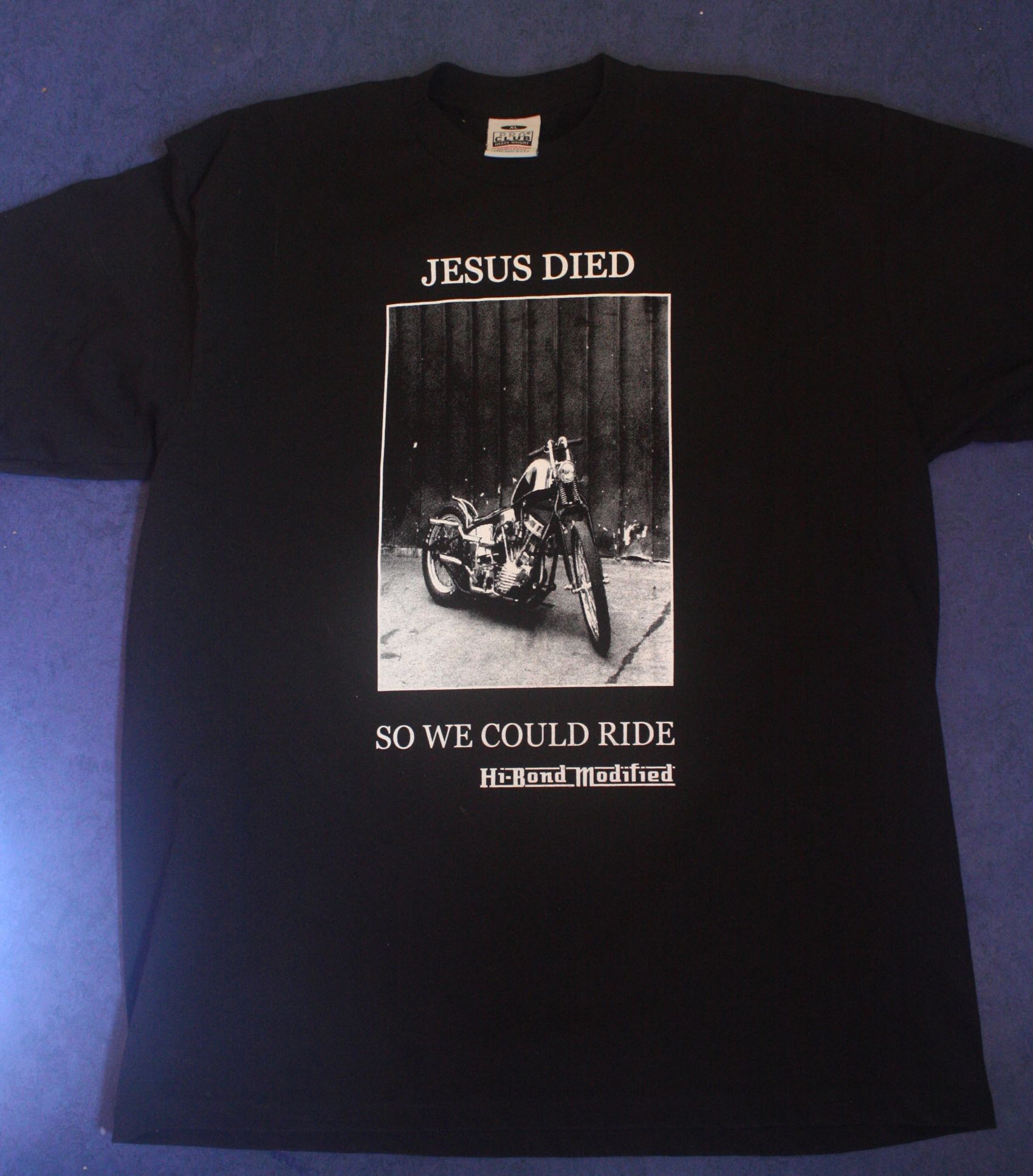 Behold this tee: “Jesus Died So We Can Ride.” Is this statement real, or just an attitudinal joke? Those are good questions, because this shirt has a history that’s all about attitude.

It’s the work of a gentleman from Santa Cruz named Jason Jessee.  In the ‘90s he was a  pro skateboarder with lucratives sponsorships from the skateboarding industry, his own lines of merchandise, and so on.  He was famous  (or infamous) for his out-there personality: objectionable, weird, willing to say about anything to make an impact.

Many of his skateboard media quotes were racist and sexist. That didn’t hurt him back then, not at a time skateboarding mainly belonged to disaffected young white males who liked that sort of thing, or at least tolerated it. It sounded bold to them. Being bold was good business.  So was also being involved in the biker/chopper building world, and wearing the occasional swastika.  The motorcycle on this tee is Jessee’s personal ride.

And Jessee drifted from the mainstream and lost his sponsorships. There were drugs. But 2010 or so, he was back in the limelight, with new sponsors much less controversy. This biker tee comes from that period; it was sold through the biker community, and sold well.

Was Jessee really serious with the “Jesus” message, or just being “bold and outrageous?” Opinions vary.  I’ll bet they varied among the people who bought the shirt.

And that’s where we could leave this; except that Jessee’s career crashed in 2018 when all the sexist/racist statements from the ’90s and beyond came back to haunt him.  What played in 1995 was poison in 2018.

Could you say his sponsors hadn’t known? Well, you can say they didn’t have to admit they knew, and when the controversy crested, they all dropped Jessee once again. And what Jason Jessee was or wasn’t, and believed or didn’t believe, will remain a controversy.

2 thoughts on “T-Shirts from the Collection: Motorcycles, Jesus, and the Occasional Car”