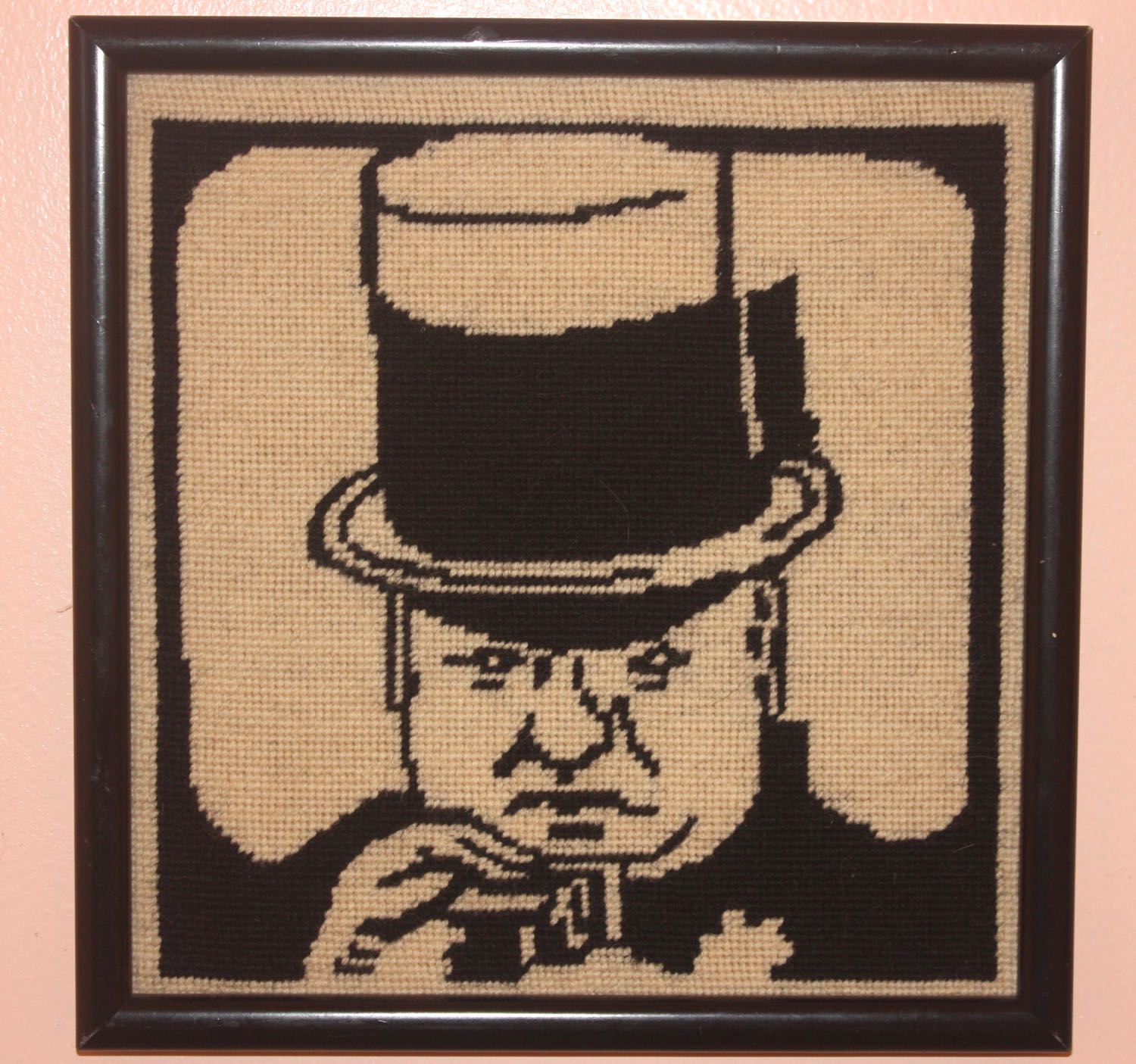 I found the above on at Goodwill for a fast  $2.99: a framed needlepoint portrait of William Claude Dukenfield, aka W.C. Fields. The great man glowers across a poker hand at the world, like some shifty Buddha.

I had to have it; needlepoint is a home craft, mainly, and a painstaking one.   My wife the knitter tells me that she can knit ten stitches in the time it takes to pull the yarn through one hole in an embroidery canvas.  So what inspired all this, instead of “God Bless Our Home” over a bunch of flowers?

You don’t hear the name W.C. Fields much these days, but the ‘60s and ‘70s were different.  Nostalgia was in; attitudinal superstars from the ‘30s and ‘40s became superstars again: people like Bogart, the Marx Brothers,  and yes, W.C. Fields.

I’d have ignored Fields even so, if I hadn’t had to watch “The Fatal Glass of Beer” 300 times. Conservatively.

“The Fatal Glass of Beer” is a 20-minute parody of morality fables and Yukon Territory adventure movies. Fields made the short in the early ‘30s.  It fell into the public domain and ended up on a 16mm reel of “family friendly” shorts and cartoons in the late ’60s.  The pizza restaurant I worked in as a teen played it over and over for the customers.  After awhile, the kitchen crew could repeat entire sections of dialog.

But it was funny stuff: Fields as a settler in the snow-blasted Yukon, cutting through the badly rear-projected snow with sled dogs whose legs were too short to reach the ground.  Fields, singing a long, awful song about the loss of his fine son to the city, where he drank the “fatal glass of beer” and turned into a ravening criminal who stole a fortune in bonds and went to jail for it.”  While Fields’ audience, a roving mountie, blubbers uncontrollably.

And every time Fields opens the door of the cabin to look outside, he lugubriously drawls, “And it’s not a fit night out for man nor beast!’ And a grip, off camera, hits him in the face with a cloud of fake snow.  We kitchen slaves would say the line along with him, adding a “sploosh” on the end for sound effects.

Of course his son comes home, released from prison, and promises to never stray again or drink another drop.  His parents greet him joyously. And, quietly, ask him if he still has the money he stole.  As it turns out, no: he burnt those horrible bonds to disavow his sins.  At which point, Fields and wife accuse him of coming home to mooch, beat him senseless, and throw him out into the blizzard.  The End.

Yes, Fields was right for the ’60s. The man held nothing sacred, respected no conventions.  His most famous persona was that of a florid con man or huckster who threw bombast in all directions but was nowhere near as sharp as he thought he was.

The character did had a subversive comment for every occasion: “Start every day off with a smile and get it over with,” or  “If a thing is worth having, it is worth cheating for.” And of course Fields named his final film “Never Give a Sucker an Even Break.”

For a while, you could see old Fields movies everywhere, but that passed.  This needlepoint pattern is from the ‘60s or early ‘70s; it’s long unavailable. Back then I had the same image, as a photo poster, on the wall of my bedroom.  The only more popular poster image at the time was Raquel Welch in a fur bikini from “One Million Years BC.” I couldn’t get that one past my parents.  I wonder if you could get it in needlepoint. 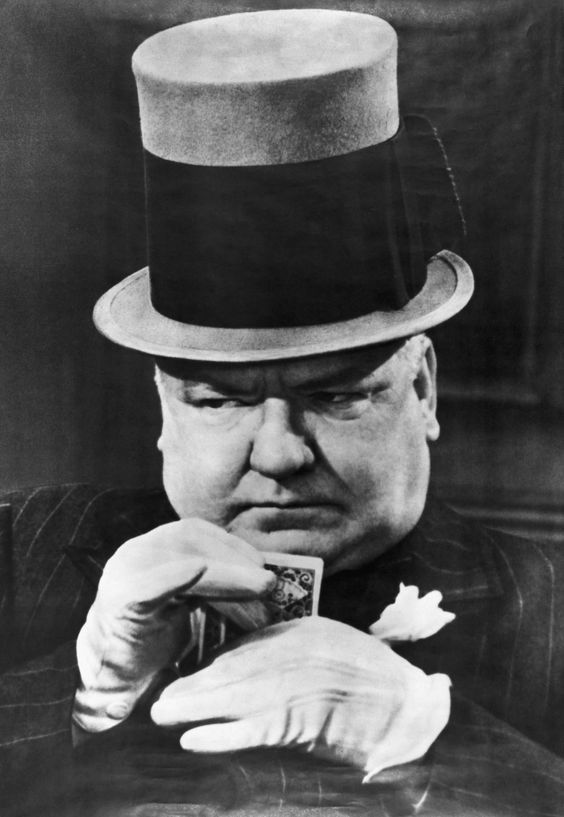 But in looking at the Fields needlepoint, and the image it came from, something strikes me: take away that stovepipe hat and add a thick, artificial wave of orange hair. With Fields’ scowling face, you have a pretty good approximation of Donald Trump: a man who takes seriously all the things that Fields made fun of: greed, low cunning, lechery, excess.

About his on-screen persona, Fields himself once said: “You’ve heard the old legend that it’s the little put-upon guy who gets the laughs, but I’m the most belligerent guy on the screen. I’m going to kill everybody. But, at the same time, I’m afraid of everybody—just a great big frightened bully . .”

Fields knew that his screen persona was a joke. But Trump doesn’t; he’s playing to it perfectly.  It’s his gospel.

Sadly for him: every day, a little more of the audience is starting to laugh.