I continue trolling thrift stores for interesting t-shirts. It’s a hobby; it keeps me off the streets. But once, I had other hobbies.

And that’s why I was so pleased to find a tee bearing a crudely-drawn picture of the bridge of the Starship Enterprise (1701A) with the full original crew.  I emphasize “crudely” here.  It’s amateur hour all the way.

Call it a phaser blast from the past: those three little letters that spell “con.” This tee invokes a whole subculture that I, and my wife, used to inhabit.  It’s called fandom, and for some it’s a way of life.  And if you want to understand it, you must go back, back to the past.. Where, in the time of  Coolidge Augustus, on the river called Hudson….

…there was Hugo. Hugo Gernsback.

Hugo published many magazines, among them Modern Electrics, and Science and Invention.  Hugo was a radio enthusiast himself. And besides, it seemed in the 1910s that every young man with an idea and copper wire and a soldering iron and a dry cell was trying to make a breakthrough.

You, know: to perfect the wristwatch television or the electric chicken plucker and Make Your Fortune.  In your garage. This garage start-up thing goes way back.

Or beyond that: perhaps, communicate with Mars.  Or preserve food with electrical impulses.  Or design giant radio robots to play ice hockey at 200 miles per hour.  Something.

Yes, it was the Dawn Time of the Geek, the rise of NerdNation: big ideas, grandiose dreams, large and fragile egos, awkward social skills, and all.  All these people needed was someplace to be: to be themselves, or somebody they dreamed of being.

This would soon be arranged.

Because it was All Good. Good for Science and Invention, certain.  And since Hugo’s readers were dreamers, and dreamers like a good story,  Hugo began to publish imaginative fiction in the back of the magazine — he called it “scientifiction.  About bright young men who traveled to other planets, and levitated magnetically, and rescued green princesses — all with the power of Electricity, and Rockets, and good old American spunk.

And this also was Really Good.  So good that Hugo started another magazine for scientifiction alone.  And it was amazing.  Truly: it was called Amazing Stories.  And around it grew a virtual nation of science fiction fans that eventually named itself Fandom.

Fans showed creativity, enthusiasm, an ability to organize, and a fetish for shortening words. (Like “scientifiction.” That didn’t last long.) They jammed Amazing’s letters column (“lettercol”) with their opinions.  Opinions about the stories, opinions about science, and opinions about other opinions.

And soon there were more science fiction magazines, local fan clubs, and sci-fi fan magazines (to be called fanzines, and later just ‘zines.) All this fan activity, or fanac, lead to bigger meetings of the “fen:” whole conventions of fen, everywhere.  And yes, they shortened the word to “con.”

The flagship science fiction con, Worldcon, launched in 1939 in NYC, and not long after came big regional cons like Boskone, Westercon, Norwescon, and then dozens of other state and local cons run by fans, for fans.  Because the fen were everywhere.

Some of the cons based themselves in one city; others, big ones like Worldcon and Westercon, change locations each year, and fan societies in different cities compete to host and run them.  Worldcon even leaves the country from time to time, and of course other countries host their own cons. 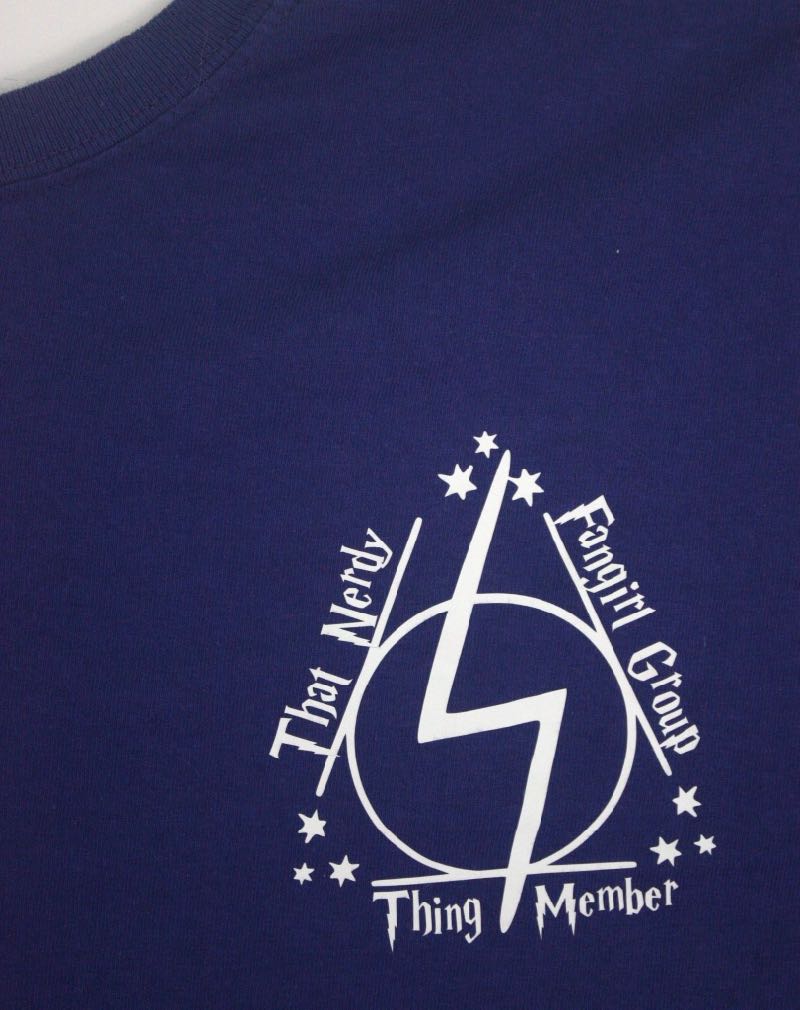 And at these cons the fen would conduct much fanac: they would talk, and drink “bheer,” talk to authors, exchange ‘zines, feud with one another, and speculate about science and the future, After all, they were mainly young and male and had a lot of futures to consider.

A few women were there at the beginning, of course, because they dreamed, too, and not just about a house and a husband and 2.3 children.  Though if you wanted to find an intelligent young man in your life with a future ahead of him: well, the odds were good, even if the goods were slightly odd. 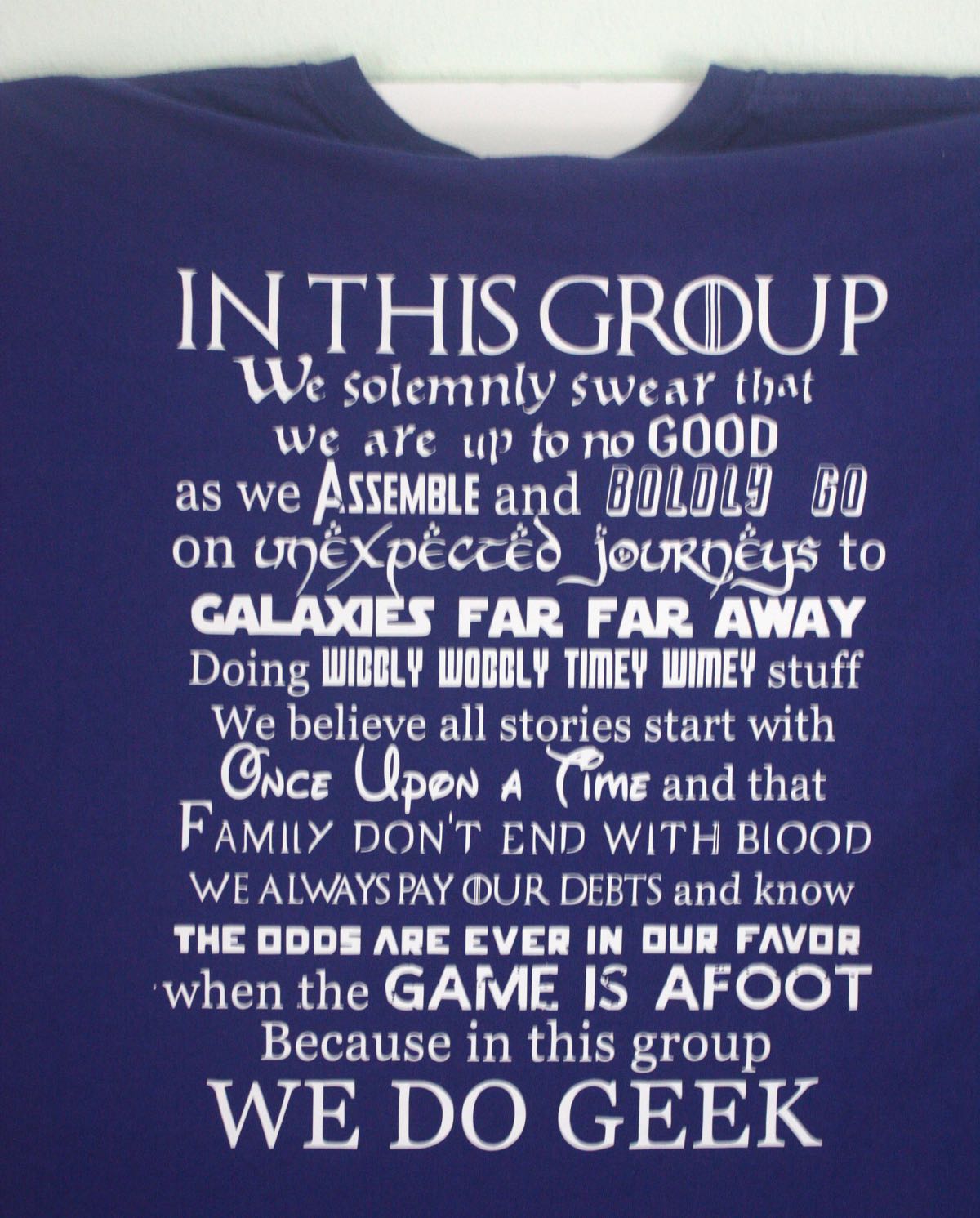 Eventually women would reach parity in fandom, in power if not always in number.  I have a tee for a women’s science fiction community that proclaims women’s absolute equality, if not superiority, in geekish fandom.

Meanwhile, back at the cons: the fans brought their bad fan artwork (except for that which was very good) and competed in the con’s art shows; or their amateur Buck Rogers or Dejah Thoris costume  for the con’s costume competition.  And yes, wore them around the con, often.

Or sat up late at night sinking punny “filksongs” about science fiction — or other fans — which they’d written themselves.  They invented their own fantasy games, too; Dungeons and Dragons and the like evolved from fannish gaming.  As well as the themes that inspire modern computer games today.

All this because cons are a place for the geeks and the nerds and the dreamers to be themselves. Around people who are just like them, don’t mind, and might even applaud.

And don’t think that fans didn’t stay up late at night trying to make all this creativity and differentness into a career for themselves. And some of them succeeded, and are Guests of Honor of today’s cons even as we speak: as professionals producing science fiction and fantasy for print, video, movies, games, and beyond.  Others went to space or designed advanced technology..

Do you watch the television series Game of Thrones? Millions do. It is based on the works of the fantasy writer George R.R. Martin, who has been a serious fan since childhood. He climbed the whole comics/science fiction club/fanzine/con ladder into the professional science fiction magazines and beyond.  And there are others like him. From the zines to your screen: so much of what you watch and consume has made that journey.

And some fans achieved within fandom itself: the skills gained from active fandom are not inconsiderable.  My wife was in on the ground floor on Trek fandom and helped organize and run a Worldcon. She even founded a con herself: for ‘zine publishers. She ran it for two years and sent it on its way as a wandering convention that moves from city to city.  It’s been sustaining itself for 34 years now.

She also founded a public access TV show about science fiction, where I met her. We traveled to cons and pushed video cameras into the faces off big-time authors and showed the results to the indifferent denizens of San Francisco.  I remember interviewing a famous author at poolside at some regional con while a unicorn danced in his lap. Okay, it was a one-horned goat pretending to be a unicorn … but that’s even better.  Good times.

Persistent fanac like this is its own reward, because if you stay in Fandom long enough you’ll become a Big Name Fan (BNF), known and blogged about and respected by all.  That’s not nothing.  Some Big Namers stay in Fandom all their lives, even those who became professional creators of one type or another.

Fandom is verging on 100 years of age, and it has never grown up; that’s the point. But it has become known throughout the land.  And the innkeepers of the land say, “Verily, these fen be tight with a dollar, but at least they don’t smash up the place like those Shriners, yea, it is written…”

And here’s where fandom has gone truly science-fictional: like some alien creature that reproduces by fission, it split up.  The tradition science fiction cons remains, big and small. But new fan groups and cons have appeared that specialize: they’re only about fantasy or horror, or only about costumes, or only about artwork, even only about filking, or only gaming, or only media.

The comics cons arose; the Trekkies organized their own cons as well, as did fans of other TV and movie franchises.  Some people even run cons as profit-making businesses, but noble committees of geeky volunteers still organize and run most cons.

And yet while fandom split, the pieces stay in alliance.  A fan might still go to the old school Westercon for traditional written science fiction action, where you might have found me, once upon a time.  But now they can also go to CostumeCon for the cosplay, or God help them even to a filking convention, or a gaming convention, or the World Fantasy Con or the World Horror Con.  Or acquire armor and a sword and join the Society for Creative Anachronism. There’s a feminist con, too.

Fandom has changed from one big department store to a gigantic mall of fandoms.  And you, you shy person who dreamed big, were welcome at all of them. And might see your friends there, or make new ones.

Which brings us to Celesticon, which is about gaming only: an entire extended weekend of nothing but gaming out on the far edge of Silicon Valley named Fremont. Dungeons and Dragons and role-playing games; card games, board games; games in costumes and games without; giant strategy games played on beautifully-detailed dioramas with hand-crafted figures to make a model railroad fan gasp with envy.

And in your gaming, be who you are, or who you want to be:

Gaming all day. Gaming all night.  Gaming for the kids and yes, you can check the latest games out of the con library and play them without buying them — although maybe later, you should.

I had to grab the Celesticon tee shirts when I found them at Goodwill because frankly, most cons don’t issue tees.  Fans love printed tees, but they usually wear their own to cons, chosen carefully to express their chosen image or subgroup: 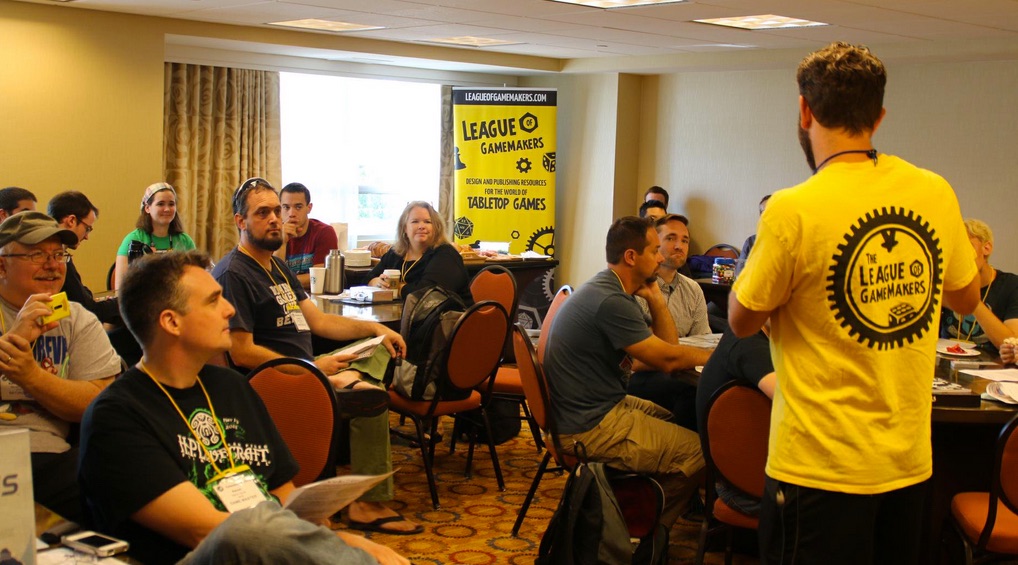 I looked up on Celesticon online, and such a classic group of fan/geeks you’ve never seen. All the more classic because many had developed their own games and gathered groups to play them and give feedback. Fans create.

Celesticon is a classic local con: 400 to 500 members, more or less nonprofit and volunteer-run, in a medium-sized city where nothing much happens.  This is where fans are at their best: if nothing’s happening, they’ll try to make something happen. And draw in like-minded people from the hinterlands for a gathering of the tribes. 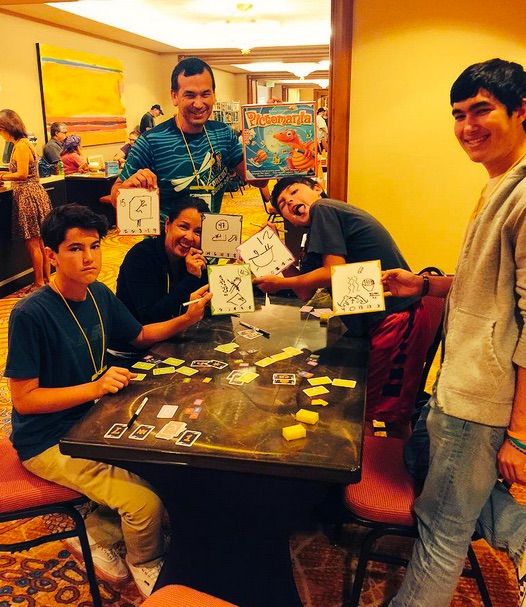 And yet — there is no more Celesticon.  The organizers cancelled Celesticon 2016, because the con committee could find no venue that their fans could afford.  The price of rooms helps fund the use of the hotel’s convention space, and the local hotels’ quotes were sky-high.  The rising price of everything in the Greater San Francisco Bay proved too much for a small-timer like Celesticon.

And yet, there’s always hope.  The organizers keep the Celesticon website alive, just in case.  There are other gamer cons not too far away. And frankly the fen are nothing if not inventive. Something may arise.

For example: there’s an annual con in my town, at the university.  Its organizers would not call it a con. They call it a “social fiction conference” and got the university to sponsor it. Notice the letters “con.”

The  conference runs as an academic event using university facilities. The cost is small; ten dollars gets you two days of activities.  There are panel discussion of popular science fiction books and games and movies, and how they reflect modern society. There are demos of games; group role-playing games; “augmented reality’ games; an escape room; tabletop gaming; cosplay on the lawn with cookies and lemonade; and featured speakers on technology, sex and technology, and UFOs.