(Note: Here is the link to Part One.)

I’ve been out in the garage a lot lately.  Kind of a guy place to be, if you’re manly and want to tune up your ’87 Taurus or make legs for that side table you promised to the missus. You know, guy stuff.

So what am I doing? Color-coding the necks of white plastic coat hangers with fifteen different colors of electrical tape.  Lucky for me, the definition of “guy stuff” expanded to include hand-painting lead soldiers and collecting old video game consoles.  I’m definitely in the groove.

By the way, were you actually aware that electrical tape came in fifteen colors? Me neither.  Actually, more than that, but my colorblind eyes can’t tell the difference between light gray and light pink or mild violet.  So I only use the gray.

All this knowledge comes to you courtesy of my colossal museum of t-shirts, which is  taking up more and more of my time — and my garage.  I’m moving hundreds of tees out of storage tubs and into wondrous, color-coded order on 40 linear feet of closet rod.  Here’s about 30 percent of it: 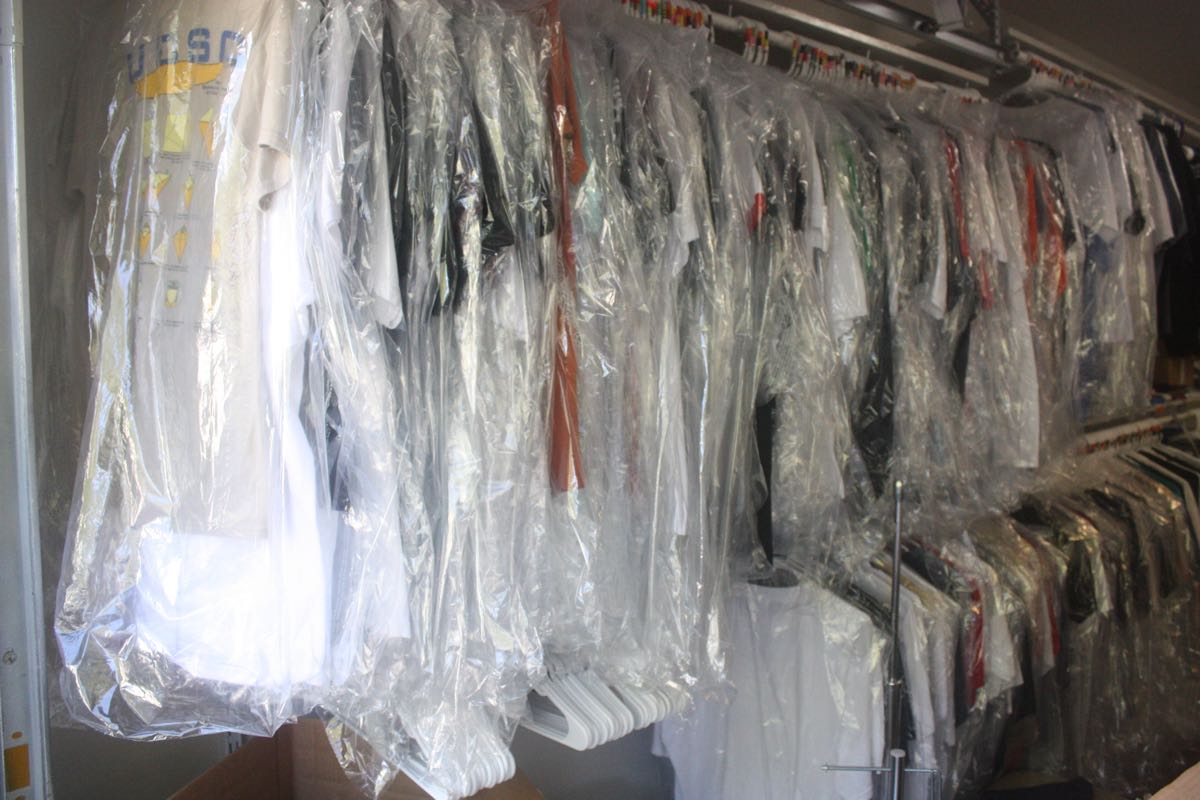 This is not a one-weekend job.  I have to:

But after I finish, I’ll be able to walk into the collection and head straight for tees from Santa Cruz (Orange, top level) from building or trades contractors (Yellow, second level) that incorporate humor (H, third level) and bad taste (B, fourth level). Because you never know when you need to find for someone a building contractor’s tee with a penis joke on it.

Not that those are rare.

It’s a lot of work.  I’d rather be doing something else. But I have to do it to get where I want.  Sometimes I wish I had unpaid interns to abuse: “Here, kid, wrapping electrical tape around coat-hangers will be valuable experience toward your career in biomolecular mechanics!” “Yowsah!”

Though it’s not completely awful.  There’s a rhythm to coding the hangers and hanging the shirts long into a weekday evening.  I also get to admire shirts that have been stowed away for years.  It’s like running into old friends at the supermarket.

And there’s entertainment. My laptop goes to the garage with me so that I can look up each shirt’s color/letter code in the database. At the same time, it streams endless ‘90s music videos from YouTube. It’s cultural enrichment: I heard tons of ‘90s pop on the car radio, back when I commuted to Silicon Valley. But I never knew what the songs were called, or who sung them. 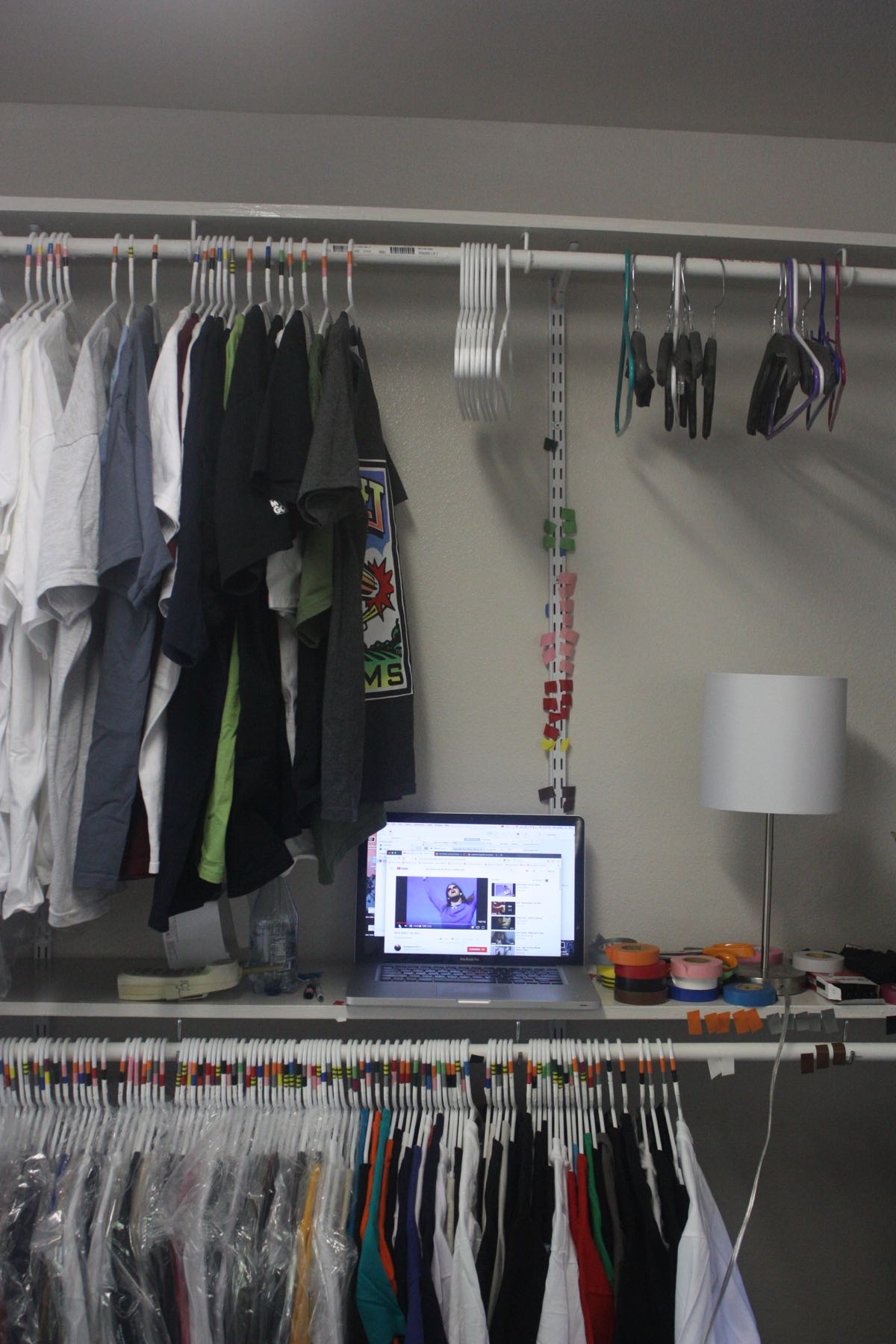 And Sheryl Crowe. I hear lots and lots of Sheryl Crowe.  Not intentionally, but she’s in every playlist, to the point where her voice has actually colonized part of my brain.  I call it Sheryl.  When I’m trying to decide whether to do chores or just kick back, “Sheryl” retrieves for me the musical phrase “If it MAKES you HAP-PEEE…”

In a weird way, this drudgery does make me happy.  I don’t see the fun in collecting things I can’t see, can’t sort, and can’t share without immense effort.  The tee shirts that appeal to me most have stories behind them.  I’d like to tell the stories.  I tell them now, to anybody who’ll listen.  And they seem to like listening.

So, why not fully research those stories and write them down. From that I’ll have a full package of images and stories that I can, I dunno:  make a book out of? Post on the Internet? Exhibit at our local “kewl” museum?  All of the above?

I’m good at seeing things that others don’t — small things that are overlooked because, well, they’re small.  But show signs that they came from something larger.  I enjoy following the trail to that larger thing that birthed the small thing.

Remember my “Police Blotter Haiku” book? Haiku based on crime reports from small-town newspapers? I published a volume; it, well, underachieved with the public.  But it was worth doing, and I learned from a few mistakes that I made.  I figured out how to do it better. Yet I’ve been stalled nine-tenths of the way through Volume II for about two years.

This life pattern repeats:  I have a great idea, I work on it, but let it go if I hit a bump.  I lose energy; the project stalls and disappears.

Hey, I was once a minor hero on the early Internet.  I had a website that some considered so juicy that I was declared a god in Boulder, Colorado.  And no, I won’t explain.  But it was too much trouble; I didn’t keep at it. There was money to be made. And later I’d look at some satire website like The Onion and say, shit, I was doing that in 1995, and better.

It’s probably lack of self-esteem. Or focus.  Or organization. Some damned thing. At any rate, I do try to fight it from time to time, and I think I’m trying again. I think I’m unconsciously building my Great Pyramid of tees to up the ante: make such a huge bet on this collection and its development that I would never dare walk away. That I wouldn’t want to.  It would be too good to ignore.

If I fill an entire garage with a collection of stories in t-shirt form, collated and organized and tracked, even I can’t flake out. I will have made a black hole of small things, the things I love most to study and tell stories about.  I have hopes that their accumulated gravity will draw me in, so that I can no longer escape to indolence no matter how I try.  I guess that’s a way of saying that I really love this stuff.

And the black hole’s pull will only strengthen, because I can’t for the life of me stop buying tee shirts.  I’ll tell myself, damn, I haven’t found anything lately, and Rhumba will point out a foot-tall stack of tees that materialized over the past few weeks.

Luckily,  tee shirts leave my collection as well as enter, or I’d be neck deep in them.  Over time, my tastes change. Since I now value most tees for the stories behind them, I can jettison the tees that, on reflection, have no story — unless they’re just really cool. .

And aside from every other reason, cataloging the collection is just — something to do. Right now I don’t do much of anything except the necessary.  Don’t even blog that much anymore.  So this is — something.  But it’s a lot of something.

I had to figure out how I was going to hang the collection by adapting an old shelving system we already had and not spending an arm and a leg.  I now know the cheapest place in America to buy closet rod center-support brackets.  Thank you, Midlands Hardware of Grandview, Missouri. You’re a third the cost of Amazon.

I had to figure  out how to keep dust off the tees.  I bought the same system that dry-cleaners and tailors use to slide a clear plastic bag down over your sport coat. I’m actually pretty good at it now. Hey, it’s another skill. I hung a few shirts up in the garage over the moist, rainy season to see if the plastic bags kept them clean and dry.  They did.

I spent weeks devising the color-coding system: what colors, what medium (beads, plastic disks, colored tape). I settled on tape, and for weeks prowled websites like Identi-tape and Tape Planet, “a brave new world of tapes to explore.” Do you know how many kinds of adhesive tape this world holds? Dozens. Hundreds.  I had a false start with paper labeling tape — many colors, but it didn’t stick well to the hanger necks  — and settled on electrical tape.  I field-tested it, too. 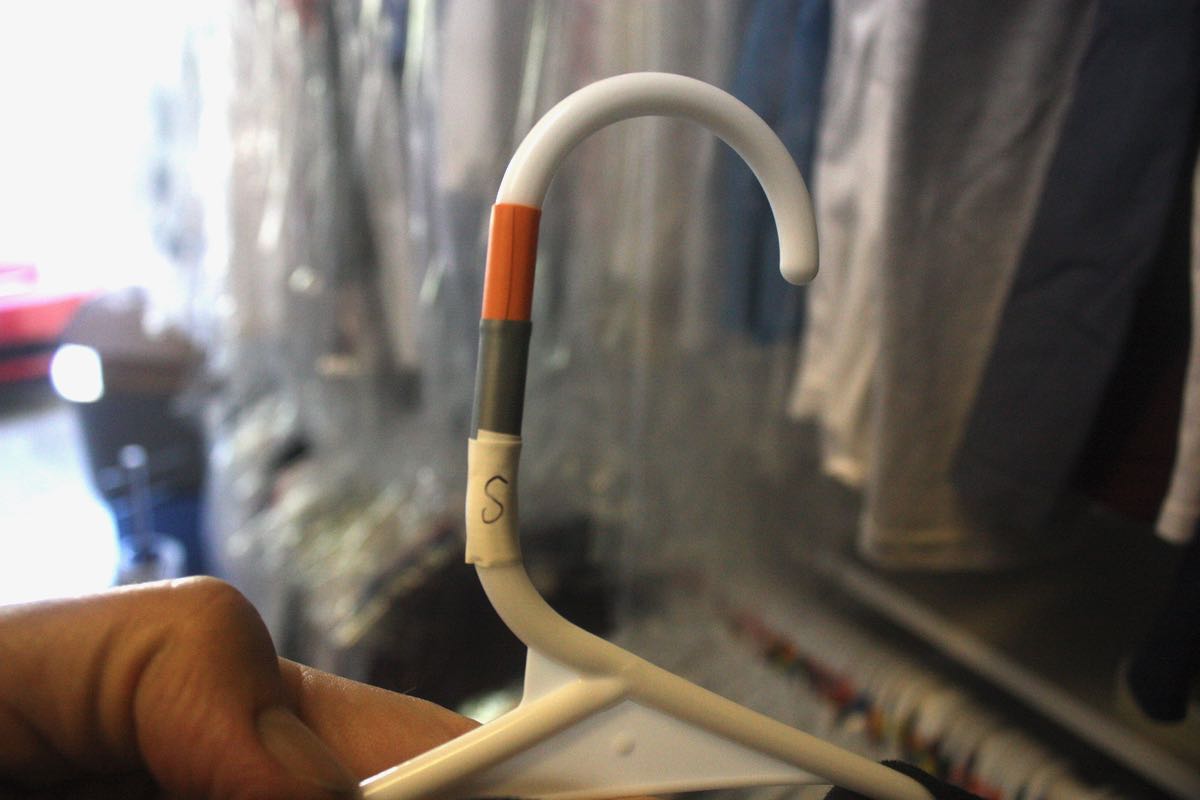 I had to pick a database, something for the Mac.  Something cheap and easy that stored photos as well as text.  I could have spent a zillion dollars for FileMaker or almost nothing on some free SQL-based database that would take all my time for a few thousand years.  Fortunately, an independent Canadian programmer named Brendan up in Calgary  made a simple — thank God — and cheap database that would do everything I wanted, including hang graphics files and documents off every record.

And then I had to learn the database, at least on a primitive level.  At this point, I have no more patience with people who complain about current affairs and rant, “Why doesn’t somebody (somebody else) DO something?” Dude, do you have any idea how much work it is to DO anything?  From scratch?”

Now some of the (few) people reading this blog have built small businesses from scratch, restore antique airplanes with their bare hands while playing the guitar, and are possibly running some component of the global financial system with an iron first.  No doubt, as you read this words,  you’re all serenading me with the world’s smallest violin. If you got this far.

But I’m just some guy who sits around thinking goofy thoughts and, sometimes, writing about them.  All I really want in life is something to research, something to write about, and someone to bullshit about it all with.   I’m just bummed with, sometimes, how much work you’ve got to do just to get there.

And I’m doing it.  But I tell ya, Interns are looking better and better.  Though then you’ve got to stand over them and make sure their iPhones don’t suck out their brains.

And yet, and yet… in a few months it’ll be done, or done to a point where the archive is functional.  And I can start doing things with it.  As I’ve always wanted to.

3 thoughts on “The Great Library, Part Two: The Drudgery”