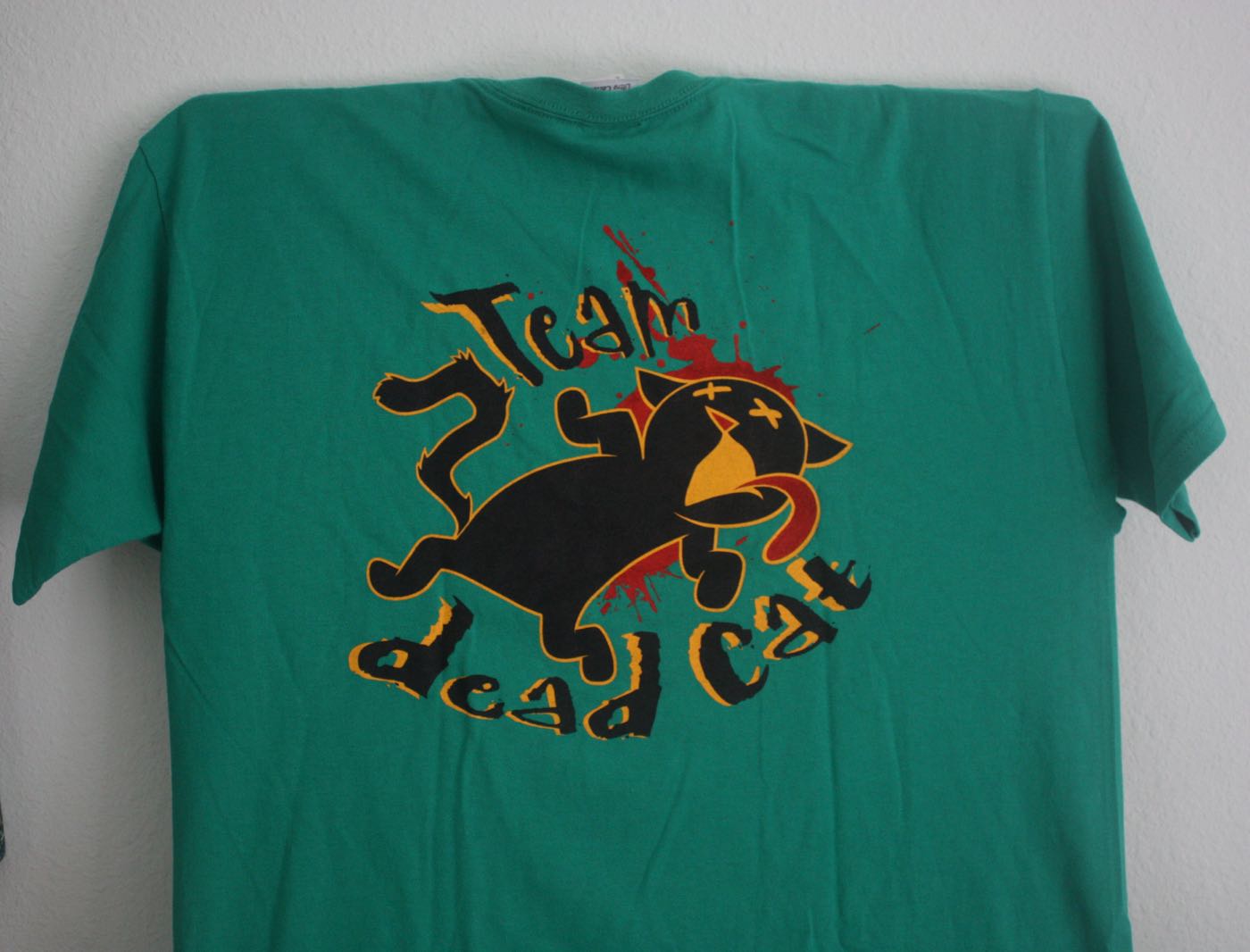 I’m a collector of stories. Every good collector is, no matter what they think they collect. Because a story lies behind every object that they lust after — or they wouldn’t lust.

And that’s why I had to have that “Team Dead Cat” t-shirt I spotted on the rack at Goodwill. Team what?

On the back of the tee: An extravagantly dead cat with crosses on its eyes sprawls across the green fabric. On the other side: the same cat, vomiting over the slogan “Cough it up for Lung Cancer!”  Dead and vomiting: nice trick. 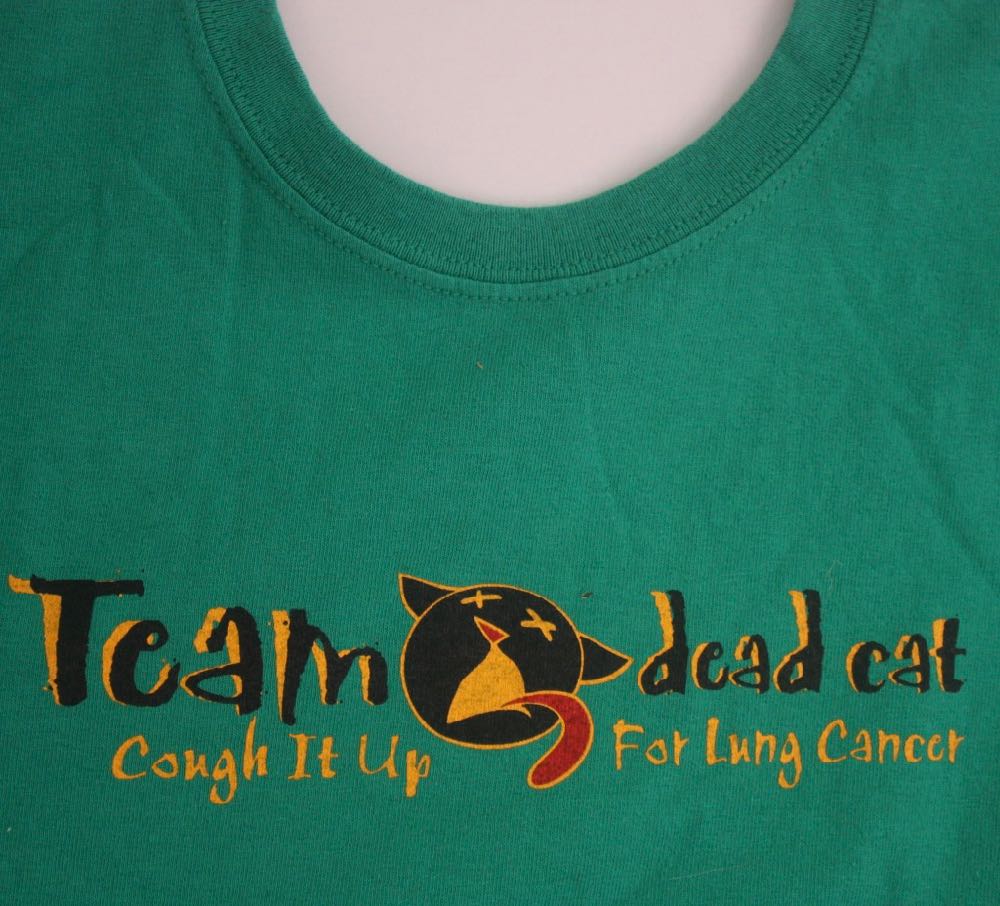 It goes like this: you’re 26 years old and you live in Bakersfield, California.  It’s 2009. One day, you get into a motorcycle accident, and after they x-ray you at the hospital they tell you that you have Stage 4 lung cancer.  Even though you don’t smoke. And that it’s spread to your brain. And that you’ve got three to six months to live, max.

You don’t exactly buy that, so you throw yourself into the chemo and other therapies and after awhile, you’re still here. And life could be worse.

But you do wonder why you smell bad. And you’re a guy named AJ Vaughn, being interviewed for the local paper:

After his first round of chemotherapy, Vaughn asked his doctor, why he thinks it made him smell awful. “Everything stinks, my breath, my sweat, food doesn’t taste good. I just have this funk. I’m always smelling. He’s like oh you have dead cat syndrome. He says imagine there’s this dead cat underneath your porch and it gets pulled out and every once in awhile you just get this stink around you,” explained Vaughn.  The stench stuck with Vaughn and he decided to name his cancer, dead cat.

“While I’m in the shower coughing and hacking up my lungs, my sister and my wife are listening and I just say don’t worry about it girls, it’s just more dead cat coming up,” he continued.

And though he was doing a fine job of just rolling with his situation, he had nothing to do in life.  Nobody would hire a terminal cancer patient.

So he found something to do. He certainly knew just how much hurt cancer brought into the world. Vaughn decided to raise money for cancer through the American Cancer Society’s Relay for Life program.

Friends and relatives of folks struck down by cancer form teams to raise money for cancer research.  Somewhat less often does the victim organize their own team while still alive.

And so Team Dead Cat was born. Team Dead Cat raised money in ways usual and unusual.  It took part in Relay for Life Walkathons, which is normal.  It sold Team Dead Cat t-shirts, which is less normal.  It dumped purple toilets in acquaintances’ yards with a reverse ransom note: Donate $15 to cancer research and the toilet will vanish from your yard.  Or, donate $20, and name the next person to receive the toilet.

All in all, Team Dead Cat raised $26,000.  It’s a story you could call inspirational.  But what I’d rather say is, AJ Vaughn was a guy who’d know how to have fun in a zombie apocalypse.  And do some good for others at the same time.

Vaughn passed at the end of 2013, four years later than he was supposed to.  His mother asked his team members and friends to honor him by wearing their Team Dead Cat shirts to his memorial.  I’ll bet you a dollar that they did, too.

It’s a good story, gleaned from news media websites over the past few years.  The thing about good stories is that they want to live.  They’ll spread from person to person, place to place, website to website.

I tracked Vaughn’s story around the Internet beginning while he was still alive .  The story came and went on various Bakersfield sites, and after his death even popped up in New Zealand. His sister had moved down there.  She’d volunteered for a local cancer fundraiser; and she told the story of her brother, and Team Dead Cat, to the local newspaper.

And now, I’m passing it on.  Humans like stories; I suspect that we even think in stories. Not all stories are good; some promote greed and hate.  So it behooves us to keep the good ones moving along. Not that we could stop ourselves; a good story wants to live.

2 thoughts on “The Fall and Rise of Team Dead Cat”