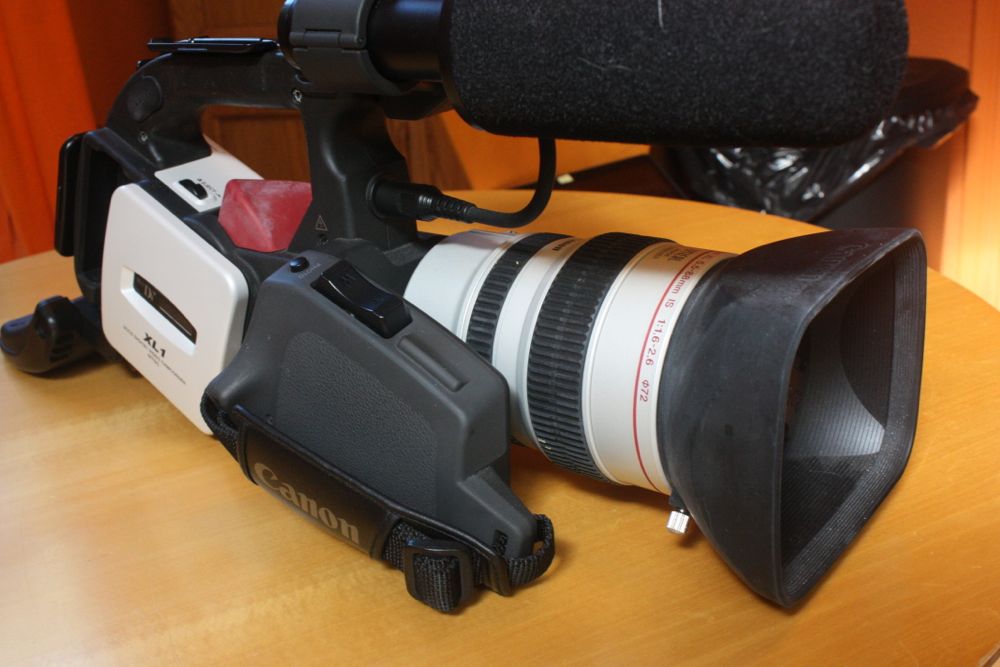 You just have to look at the thing to know that it was a serious piece of work. Side-mount color viewfinder/eye piece, interchangeable lenses, digital video recording, onboard sound mixer, three different external video interfaces including digital, eight or nine preset video modes or full manual if you preferred. It could even receive audio line-in from an external mixer. The power was yours.

If you wanted a high-end “pro-consumer” camcorder in 2001, this was the one you lay awake dreaming of: the Canon XL-1. List price over $4K. No flimsy plastic construction here, no endless scrolling through menus in the viewfinder: 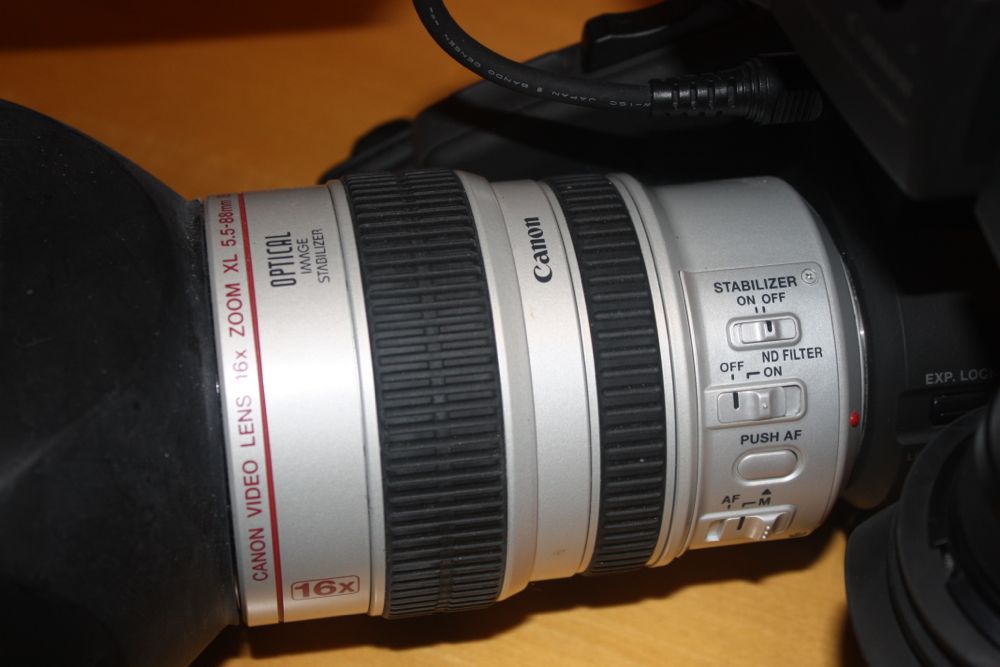 The plastic casing was thick; the chassis, all metal. It had so many functions that there was four separate control panels and two LCD displays on the camera body: endless buttons, pop-up knobs, jacks, and pots, labeled and unlabeled. I only somewhat knew what I was doing with the XL-1. But they were the mainstay of indie filmmakers for years.

And why am I writing in the past tense? The XL-1 is still here, 13 years later. It works fine, too. 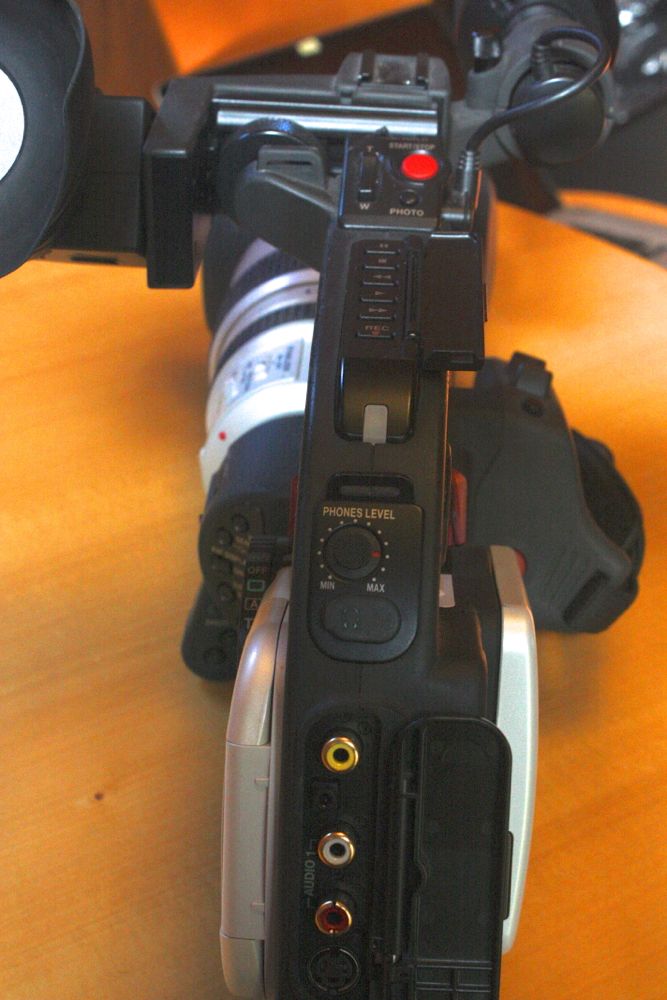 Rhumba and I videotaped church services with it, back when we attended the Church of the Holy Dividend. We’d tape the weekly service, edit it in the computer, and send a disc to the public access TV channel, who’d play it on the air for the shut-in parishioners or those who couldn’t come that week, or even those who wanted to hear the sermon again because they couldn’t believe what they’d heard the first time. Or anybody, really, who happened to tune by. Throw a message across the airwaves and you never know who it’ll land on.

Sound was our big problem; even a good camcorder’s onboard mike couldn’t pick up a sermon from 30 feet away across a crowded room with no amplified sound. But the XL-1 could take external sound input. Rhumba operated a little sound mixer fed by two stage microphones for the church at large and a couple of DJ mikes we mounted on the pulpits. Her board cabled the sound into the XL-1, where I made sure that the onboard mixer wasn’t being overdriven. 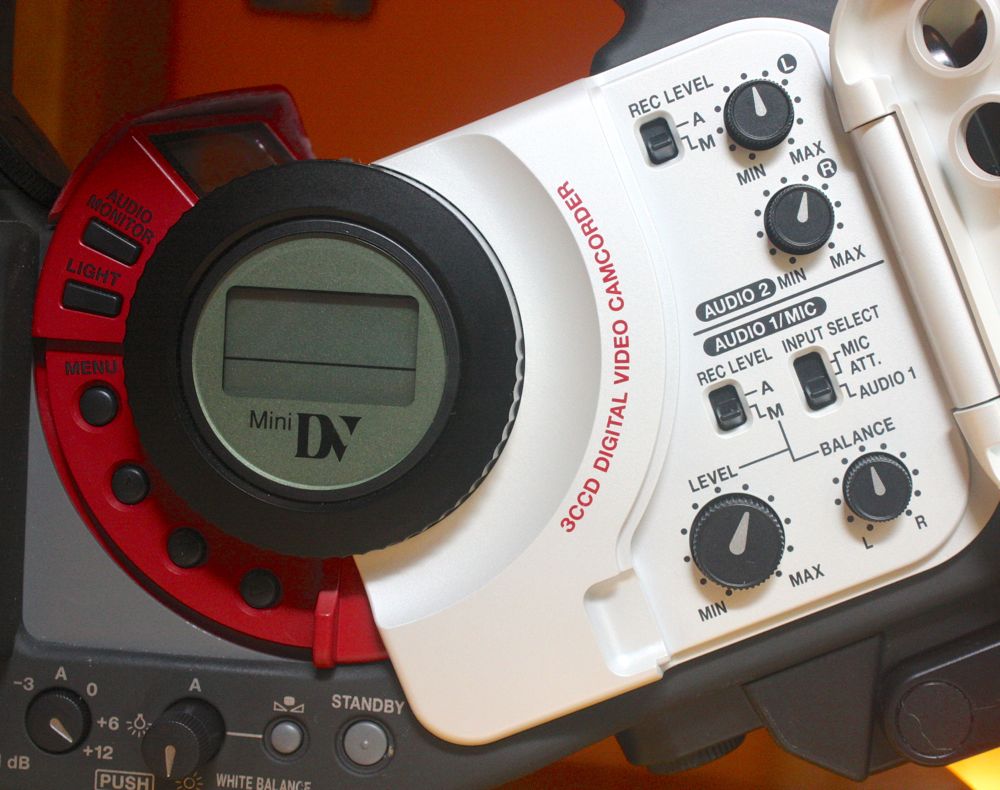 And steered the camera and tried to keep the image in focus and not give the tripod a good wallop whenever I had to scratch my nose. There was no good spot for a cameraman at Holy Dividend. I had to sit in a pew, second row, with the center tripod leg on the floor between my legs, and the other two, half-collapsed, on the seat of the pew to either side of me. Once I assumed the position, I couldn’t move until the service finished.

Holy Dividend was a dark old Gothic wooden pile, but the XL-1 could pierce the gloom if I cranked up the video gain to nuclear levels. And then, inevitably, I’d have to track the minister walking in front of a stained glass window and the light would go nova until i twiddled the right knobs.

It was serious seat-of-the-pants video; not high quality, but we got what we were after. Later at home, I’d do what I could do to clean things up in the computer.

This went on for some years until we left Holy Dividend– or it left us. Opinions vary. Church is like politics; when money is the most important thing, how good can it be?

But we still had the video equipment, and Sundays were free. We wanted a new church — eventually. So we pitched a new show to the videoheads down at the public access channel: we’d go to a different church every week and tape a service. Our secret motto was, “We church-shop, so you don’t have to.” Public Access liked the idea, but they didn’t like my proposed title, “Church of the Week.” I changed the name to “Communities of Worship” and they gave us a time slot. I thought of it as “the CoW.”

We ran the CoW for a couple of years. At first we hoped to simply patch into the church sounds systems and leave all the audio to them. But church sound systems proved as idiosyncratic as church wiring, and in the end we brought our own mikes and stands and mixer, duct-taped our cables to the carpet and carried on. We picked up a nice shotgun mike for those times when we had to set up in the very back of a church — which was most of the time.

The mega-churches wanted nothing to do with us — they had their own paid AV staff — but other than that we saw all the stripes of church that there are.

It was fun. In a way, it was anthropology: a new community every week, each with its own history and taboos and social order. A surprising number of churches were excited to see us; and a surprising number were suspicious, or surly, or indecisive. Some of the ministers were amazing people; others less so, but doing their best; and a few were too busy being holy to be good.

But the XL-1 never let us down, no matter how much we knocked it around. And every week we showed whoever cared to know, what happened inside those boxy stucco buildings that only filled their parking lots on Sundays.

In theory, Christianity should be pretty simple: two commandments. Love God; love thy neighbor. One asterisk: by the way, God lives in all of us. So, loving your neighbor is loving God; and the love of your neighbors is the love of God.

If you’re a Christian agnostic, and there are a ton of us, it all collapses down into the immortal words of Bill and Ted: “Be excellent to each other.”

That’s all there is to it; everything else is tradition and ca ca. But there’s a lot of ca ca. As soon as Jesus said, “Love thy neighbor as thyself,” some smart-ass in the crowd asked, “So who’s my neighbor?” “Everybody,” the man answered. His disciples nodded wisely and wrote it down; and, for the next 2000 years, Christians have searched assiduously for exceptions and loopholes.

There was ca ca wherever we went; but also at least some good people who “got it,” people who didn’t let tradition or ca-ca get in the way of doing the right thing. Sometimes they led the church; sometimes they were the underdogs. Church has always been like this; every religion, every sect, everywhere. But there’s always hope. For everybody. You may say that religions are hypocritical; I say, churches are run by people, not gods. How could it be different?

We finally found a church of “got it” people who had the same style we did, and settled in. We retired our TV show, and the XL-1. It sat in its carrier for years: meditating, I suppose, or waiting. During service, Rhumba and I run PowerPoint slides of the hymns up on the wall with a media projector. That’s the extent of our video geekery these days.

We’re cleaning house this week, and I pulled the XL-1 out of its tomb for a look. It’s a dinosaur, but it still lights up; and it still has a few tricks that are beyond even this year’s low-end camcorders. I emailed the video production instructor in the high school vocation education program and asked if he wanted the XL-1, some tripods, and the microphones. He jumped at it. The kids always needed good camcorders; thirteen-year-old state-of-the-art would be more than fine. He was hungry for video tripods, microphones, everything. No matter what I had, he said, there would be a use for it. He thanked me profusely.

I tried to drop the stuff off at his classroom day before yesterday, but high school was canceled because of terrorist threats — most likely made by a bored teenager, but the administration dared take no chances. I stopped by again the next day, but I didn’t want to convince the armed police at the main entrance that the longish cases I was carrying weren’t full of shotguns and pipe bombs. I finally made it into school today and dropped off the equipment.

There it is, public education today: underfunded, fearful, kind of desperate, written off by the few and well-to-do who send their children to private schools or exclusive charters. There doesn’t seem to be the money to help the next generation to thrive. And I guess that the smart-ass question I have to ask is, “Who is your neighbor?”

I’m not expecting people to stream back to church to find out. But I can hope that some eighteen-year-old will heft the Canon XL-1 onto her shoulder and stride forth to record an answer. 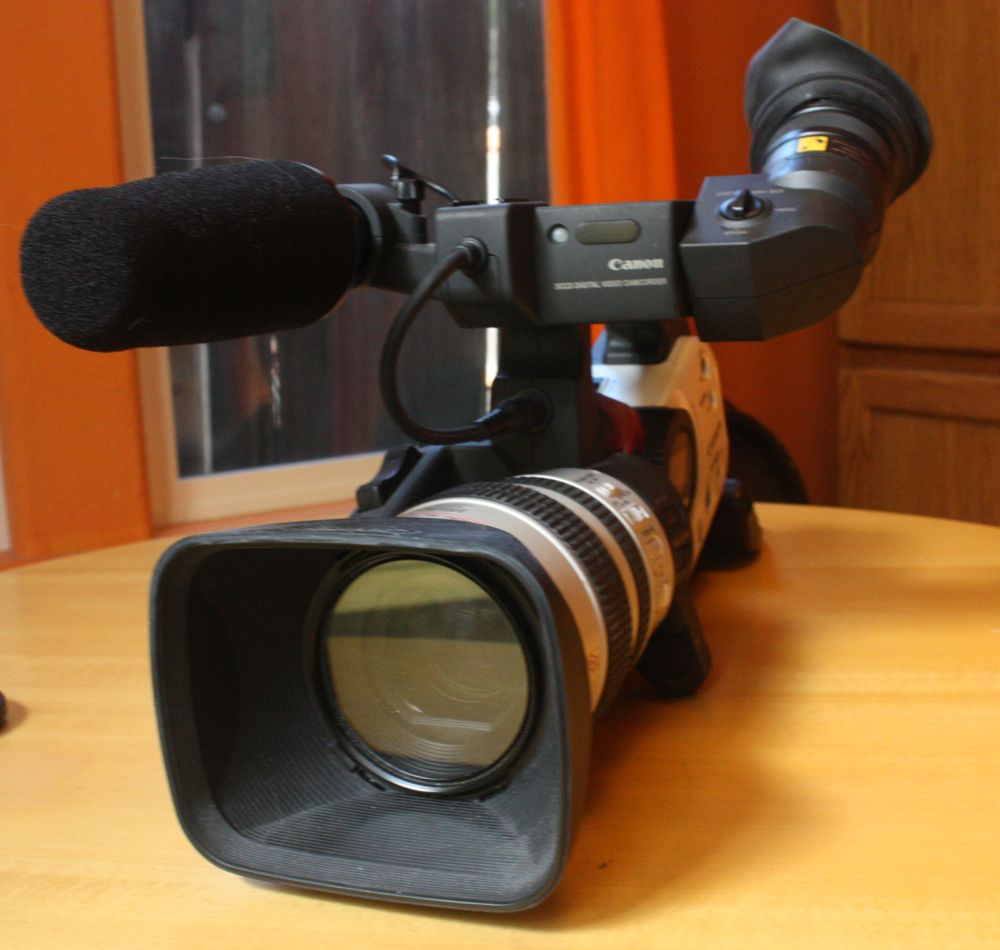 2 thoughts on “The Question”