Is a picture worth a thousand words?

See the picture and caption below. 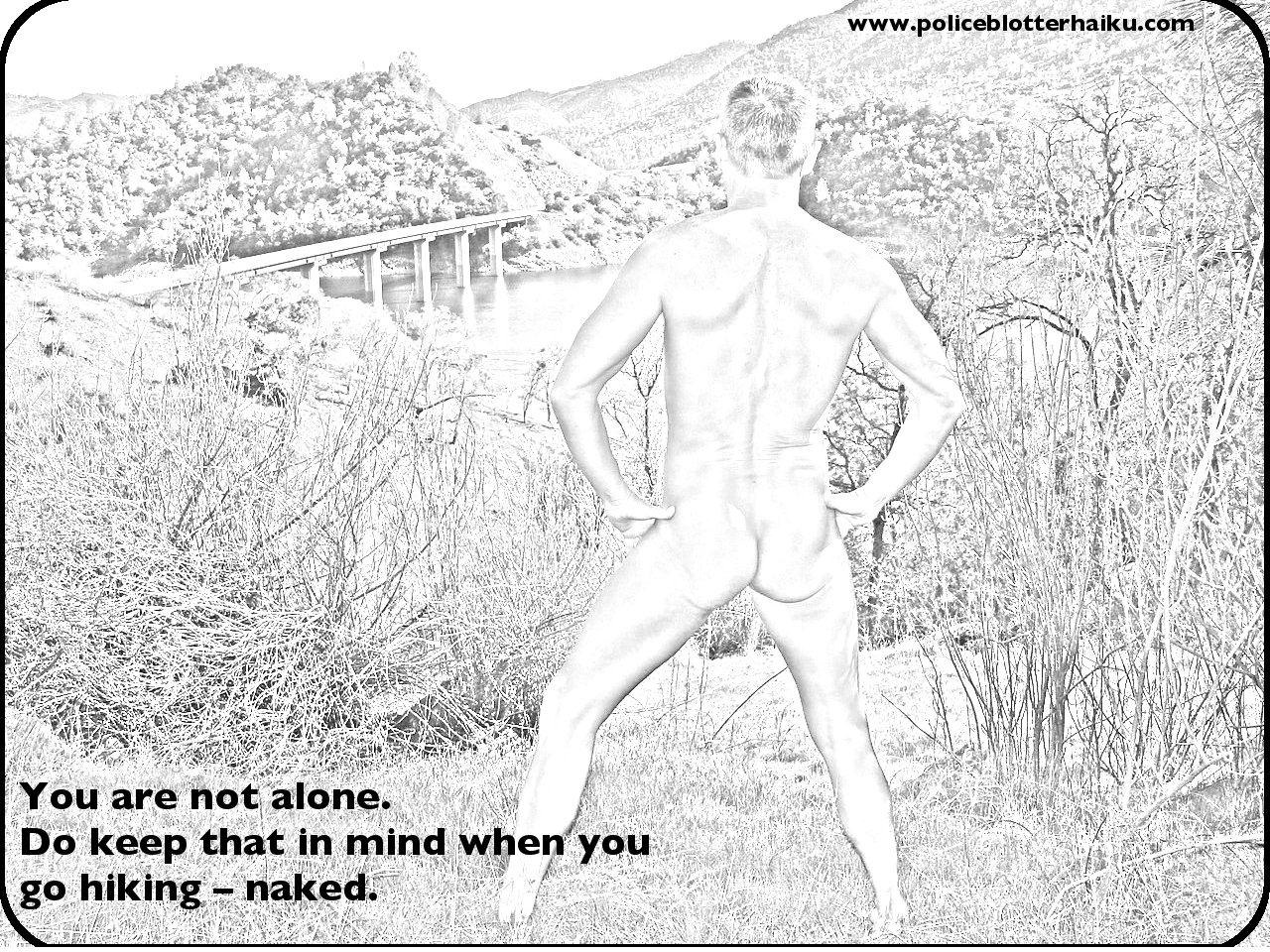 As a word guy, I favor words. But words and pictures together can make a powerful team.

Count out the caption’s syllables; it’s a standard 5-7-5 haiku.   I write haiku based on crime stories from the newspapers: seventeen-syllable short stories about human folly and error.  You can check them out right now, if you wish, at http://www.policeblotterhaiku.com.

I’m even self-publishing a police blotter haiku book. But as it turns out, page after grey page of haiku looks pretty boring. I needed some illustrations; and some help.

Enter GIMP.  GIMP is an image editing program, similar to Adobe Photoshop; it does all sorts of things to photos . It can even make them look like drawings, which is what I wanted.

Photoshop costs hundreds of dollars.  GIMP is nearly as powerful as Photoshop – and free.

I like to say that I come from the True Internet.  The enthusiast’s Internet.  Where people shared and gave away knowledge and information and skills for the satisfaction, and money wasn’t the major point of it all.  Back in the 90s, the True Internet dominated.  Because nobody had yet figured out how to make money online.

In those days, I was all over the Internet. I maintained a frequently-asked-questions page for Santa Cruz; I answered questions from people who wanted to move here, go to university here, even find missing relatives.

During the dot-com boom, I ran another site that showed people where to look online for work in Santa Cruz; people emailed to thank me for the jobs they’d gotten.

When the boom collapsed, I published  rumors that people sent me about which local dotcoms would crash next.  The Santa Cruz newspaper published stories based on my stories.

Because I like murals, I published a website compendium of Santa Cruz’ many public murals, with information about the artists and mural-making. After awhile, cities and hospitals contacted me for advice on planning mural projects.  I gave mural tours to university students from Liverpool.  For several years.  More of them kept coming.

People did great things for me on the True Internet.  I had an old Japanese flag that my father had brought back from his never-clearly-described adventures in World War II; it was covered with hand-written Japanese ideographs.  I took pictures of the flag, put them on a website, and posted the hyperlink on Japanese-American discussion boards; Japanese-speakers translated the flag for me; it had been given to a Japanese naval fighter pilot on his way out to war.  The inscriptions were farewell messages from students and staff at a teacher’s college north of Tokyo. A Japanese-American neurosurgeon in Tokyo tracked down the school for me.  And told me that flags like this were given to friends who are going away — and will probably not be seen again.

Wikipedia, the free encyclopedia built by the people themselves, is pure True Internet.  As are Project Gutenberg, LibriVox, Instructables, Ravelry, Daily Kos, even Reddit or craigslist or Facebook or Twitter: all platforms that are (or can be) filled with useful content posted by just plain folks who want to help.

And YouTube: you may troll YouTube to watch old TV shows and dancing-baby videos, but other people go there to post videos that show how to play guitar, patch a bicycle tire, cut up a chicken, knit socks, draw, drill holes in metal, publish a website, bake pita bread, and on and on.  Some do it for money or the hope of money; but for most, it’s – just because.

A lot of crap lives the Internet these days, and danger as well. But the True Internet survives and thrives: the land of geeks and makers, of people who get excited about interesting things and want others to know about them.  People who share with others because, money aside, that’s what people do.

And yet the New Internet gets all the attention these days: that creature of e-commerce and Amazon and advertising and subscription-only websites and stock offerings and cookies and harvesting your personal information to sell to others.  The New Internet is where you make money; where you sell instead of share.

I’m not against people making a buck or two on the Internet, but when the money becomes more important than the love, the party’s over.  In fact, the drinks are probably spiked. Disillusioned Facebook members are not so hard to find these days.

And yet again, there’s GIMP. It’s open-source software, built up over fifteen years by volunteer programmers working together over the Internet.  GIMP’s a powerful tool; a bit rough around the edges, but it certainly serves all my photo-editing needs.  And they give it away.  Because they think that software should be free, and everyone should have it.  So that other people can follow their dreams with or without money.

Working for love… who’d have thought it? Don’t they know you can’t get rich that way?

I’m illustrating Police Blotter Haiku: The Book with photographs that I and others will take; I will run the photos through GIMP filters to make them look like black-and-white drawings.

At present, I’m mainly swiping pictures off the Internet to experiment with. Yet I also have pictures that I will use in the final draft, because they were taken for me by people who found me on the Internet and volunteered to help.  Volunteered; there’s that word again.

Take a look at one of my favorite GIMP-ized photos do date, a deserted parking lot after the rain.  A volunteer took the original photo, so I’ll be using it in the book. You can go over to www.policeblotterhaiku.com and see more, if you like. 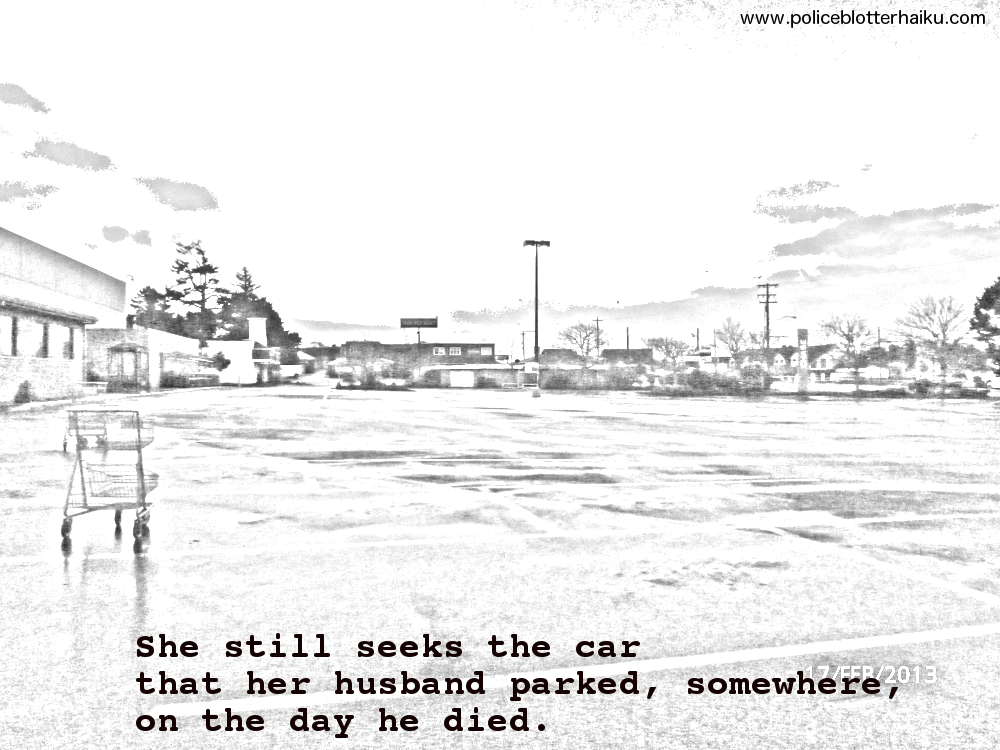 I will charge money for Police Blotter Haiku, the book  But not a lot. Money’s not really the point.  What I want is the achievement, the validation, that comes from selling 1,000 copies of something I wrote.

So I can then say, yeah, I’m a real author. Or even, a published poet who actually sold 1,000 copies of his work.  There aren’t so many of those, believe me.

This goal is doable, I judge; newspaper people think that my haiku are pretty funny, and I can use that.

But even if I undershoot the goal, there’s so much to learn: new software, Internet marketing tools, social networking strategies, and more.  And I might meet some interesting people along the way: always the unwritten goal in any decent enterprise. In truth I’ve already met some.

See you on the True Internet – as always.

5 thoughts on “The Internet of Love”