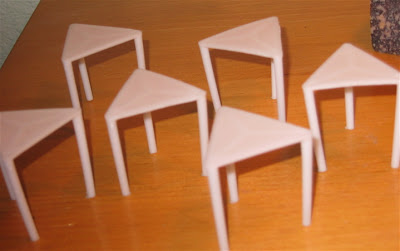 It had been a long Saturday afternoon, a week or two before Christmas at St. Bob the Informal’s Presbymethertarian Church. In a moment of madness, Rhumba had volunteered to help with the annual Christmas pageant, and this was the appointed time for the dress rehearsal.

I will spare you the gory details, but here is a sort of impressionistic word mural of the proceedings:

Half-a-dozen six-year-olds in sheep suits careening up and down the aisle; a sullen, buxom 13-year-old Mary glowering at her diminuitive, eight-year-old Joseph; two giggling Wise Girls who consistently ignore their cues; an overworked choir master who hasn’t read the script yet; little-girl angels twirling in place to the music until they get dizzy and fall over; and St. Bob’s bluesy praise band, The Damascus Road Ramblers, rocking out to “Felice Navidad.”

There. That’s almost as good as being there, isn’t it? Trust me.

It had been a forced march to get everyone to the rehearsal; Presbymethertarians and their kids are as over-scheduled as anybody these days. But the sweetener for the deal had been an offer of free pizza after the work was done, courtesy of the Sunday School budget.

The average seven-year-old will wade through molten lava for a slice of pizza. And the average seven-year-old’s mom will make that extra effort to get him to Sunday School functions if it means she doesn’t have to cook him dinner. And can maybe take care of her own dinner in the bargain. Believe this: It’s food that holds a church together, whatever religion. There’s good reason why the core religious ritual of Christianity is a meal.

So, after running through the program twice, the kids piled into the wardrobe room, handed over their costumes and streamed straight to the social hall where a stack of eight pizza boxes stood ready.

I had been moping around in the hallway while the kids changed clothing. As somebody’s husband, I’d had plenty of gofer jobs to do, but no real responsibility. Which was fine. But as the kids hurtled past, I realized that no adult had yet made it to the social hall. And that 20-plus young children plus eight stacked, boxed, unattended pizzas is an equation for disaster.

I’m slow on the uptake in many ways, but this time my legs made for the social hall at a dead run before my brain even sent the order. I got there just as the first six-year-old started to open the first box.

“ME! ME! ME!” There was a forest of hands. Kids are genetically programmed to eat only plain cheese pizza until the age of seven. After which point they might broaden out so far as to eat a slice with pepperoni. Maybe.

I got a couple of boxes open and hurled slices of cheese pizza onto plates for the waiting munchkins. Strangely, the more they ate, the more there seemed to be; the mothers had ordered enough. It was like the miracle of the loaves and fishes, courtesy of Tony and Alba’s Pizza. Everything was under control.

Then a high little voice piped: “Can I have the table?”

And a sharp-faced little girl asked, “Can I have it?”

“No!” I snapped. And snatched them up. “Who wants pepperoni?”

No, the kids weren’t asking for furniture. The “tables” are white, molded plastic triangles on three legs, perhaps two inches tall. After a cook slides a pizza into a “to go” box, he throws one or two of these things on top of the pie before closing the lid. They prevent the box lid from collapsing on top of the pizza and sticking to the cheese.

And for some reason, if you get a group of kids together for pizza, they’ll compete for the table. If you give it to one, the others will bitch and moan about it being “not fair” ’til the end of the meal. The lucky one will monopolize the table and maybe even tease the rest of them about it. If he’s not the biggest one in the room, somebody will try to take it from him. It’s a mess.

And all for a little piece of plastic that’s not even a real toy. I mean, these kids have toys galore at home, game consoles, light-up sneakers, anything you can think of. But right here, right now, a dinky little plastic table is the center of their desire. Because everybody else wants it, but only one of them can have it. Having it makes them special. And special is superior. Special gets attention. And to kids, attention is power.

The only way around the table dilemma is to give them to everyone, or give them to no one. We had eight pizzas and eight or ten tables, but 25 kids — not good enough. So I kept snatching up the tables and sticking them in my pocket. A no-nonsense Sunday School Mom materialized beside me and began serving from the other boxes. She picked up the tables, too. She knew.

Which is how I ended up with a greasy pocketful of triangular plastic tables. For some weeks they found a home on top of my dresser; the cats liked to push them over the edge and watch them drop. The thrills never stop with these things.

It’s easy to dismiss this whole table-lust phenomenon as childish behavior. But as an observant man once wrote, the thoughts of children are the thoughts of men written in crude, heavy letters. Children don’t have the subtlety of adults, but adults and children all share the same impulses. We all have desires, and, like children, some adults give into theirs recklessly.

A certain number of adults want more than their share of things, just because they want it. Because having it makes them special, superior. And if they can’t get what they want — and if no one’s there to prevent them — they cheat until they do get it. And pretty soon, everybody cheats because there are no rules anymore and they feel they have to cheat just to get anything for themselves at all. It’s as if I’d had 25 tables, one for each kid, but stood by passively while three kids grabbed them all.

It’s all simple schoolyard behavior — when the yard duty isn’t around to keep things straight. The way I see it, the yard duty on our national playground stepped out for a smoke 25 or 30 years ago, and hasn’t been seen since.

Wall Street is corrupt and irresponsible, yet can always depend on the politicians to bail it out. Why not? They bribe them well. Corporations are corrupt, even to their own stockholders. The health care industry kills and cheat people at the same time. Titular control of the country is split between far-right radicals and so-called reasonable men whose cautious little reforms are flawed and weak and change little. Because they bow to the bankers, too.

But it can’t go on forever. If I hadn’t beat the kids to the social hall — if I’d slouched out to the parking lot for some peace and quiet and missed the whole thing — it is conceivable that they would have spilled most of the pizza onto the floor while jostling to get their pieces first, and further, ground the fallen pieces into the new, expensive church carpet with their little feet. It is also possible that one or two alpha kids could have hogged all the tables and started their own table-based empire complete with haves, have-nots, and a squad of subservient beta bullies to keep order.

But in reality, before it had gotten that bad — as soon as enough of the kids realized that the stronger kids were getting first crack at the pizza and the tables — a delegation of less able predators would have run down the hall to find the adults. Who would have come at a run, dressed down the troublemakers, confiscated the tables, made the kids clean up their mess themselves, and send the worst offenders home with no dinner. Then there would be a long lecture about how the rest of them were only getting two pieces each because the others had been dumped on the floor, all because everybody forgot how to share. And no, they weren’t allowed to eat the ones that fell on the floor.

There would be more wailing. And grumbling. And sulking. But in the end nearly every child (except the bullies who had been winning) would have accepted it. Because deep down, even the jiggliest, most rambunctious child likes order and security. Wants food, a warm bed, an order to his life that he can depend on. And of course hugs from Mommy and Daddy.

Grown-ups like the same things. Oh, we can fall under the spell of people who tell us that speculation — in real estate, in stocks, in commodities — is a sure path to riches, so why invest in society and take care of each other. Or we can accept the reasonable sounding argument of “shared sacrifice” and slash vital government programs while keeping taxes low on the ultra-rich.

But when the real estate markets begin to collapse and the financial instruments that we were told were so strong turn out to be based on fraud, and “balancing the budget” means eternal unemployment for the least of us, and the smooth salesmen who sold us on all these things are nowhere to be found…. well, an oversized house and a couple of expensive cars and an Acapulco condo and fancy electronic toys become unimportant. What does become important is a regular income, reliable health care, old age security, opportunities for the kids. In other words, order and security.

So at some point, a lot of us will start screaming for the adults to come and fix things and punish the bullies and make them share. Who yet knows who these adults are? Maybe we’ll invent them.

11 thoughts on “That Obscure Object of Desire”