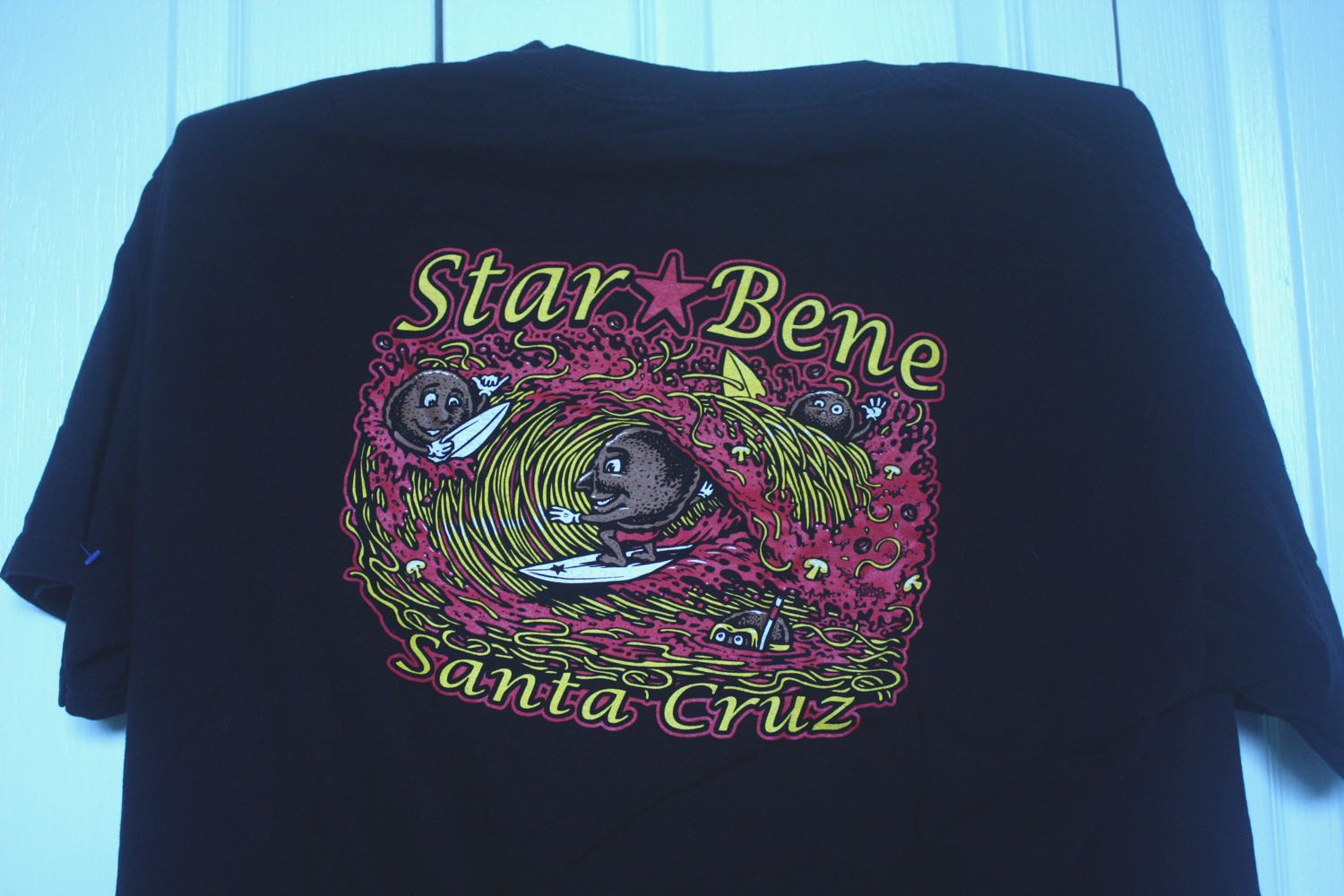 Santa Cruz is a town that supports the arts: the art of skateboard decks, of surfboard painting, of music posters. And t-shirts.  Tons and tons of t-shirts from local skateboard companies like NHS (Santa Cruz brand skateboards) and sportswear companies like O”Neill’s, of wetsuit fame. These tees are nationally distributed, as are the skateboards and other graphic products.  But many of the artists are local.  And it’s expensive here. And the artists need to keep busy. So some do tees for local businesses as well.

Enter Jimbo Phillips.  Jimbo is a second-generation Santa Cruz commercial artist who got into the business drawing eyeballs and grimacing faces on the bottom of skateboard decks for his father Jim, who was art director for NHS in the ’80s.

And he still does draw giant eyeballs and grotesque surfers with their eyes popping out and heavy-bosomed robotic waitresses toting blasters and serving drinks to aliens, and skeletons playing guitar.  And you’re welcome to go over to the Jimbo Phillips website and buy those tees (and posters, and prints, and hoodies, and so on.) I’m not; I get mine at Goodwill, and Jimbo wants $30. 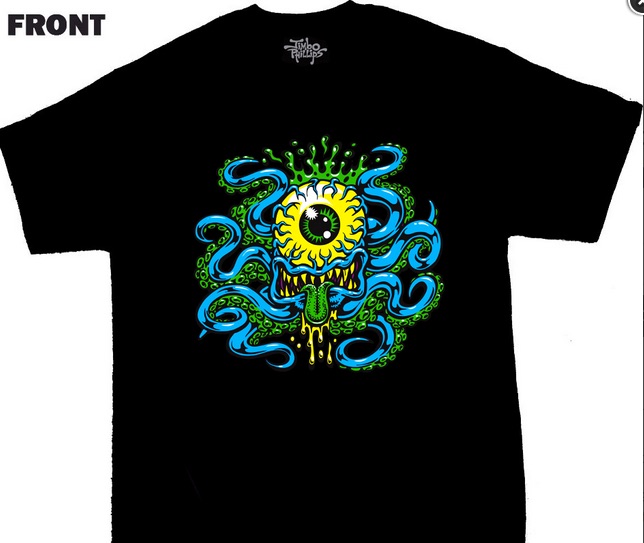 But he’s freelance and needs whatever business he can get. So Jimbo’s also ready and willing to draw graphics for local businesses and nonprofits, and give ’em what they want (usually includes fewer giant eyeballs).  The end products usually include t-shirts. And those I can find at Goodwill.

I pick up every Phillips tee I can find, because I like his style. It is distinctive, while also informed by underground comics, “low art” like the art of Ed Roth, and so on.  Like his mentors he draws efficiently and cleanly, with a good line.  And he’s always fun. If you put together a collection of Jimbo’s tees for local businesses, you get a pretty good idea of what goes on here in Santa Cruz.  And I have arranged that for you. 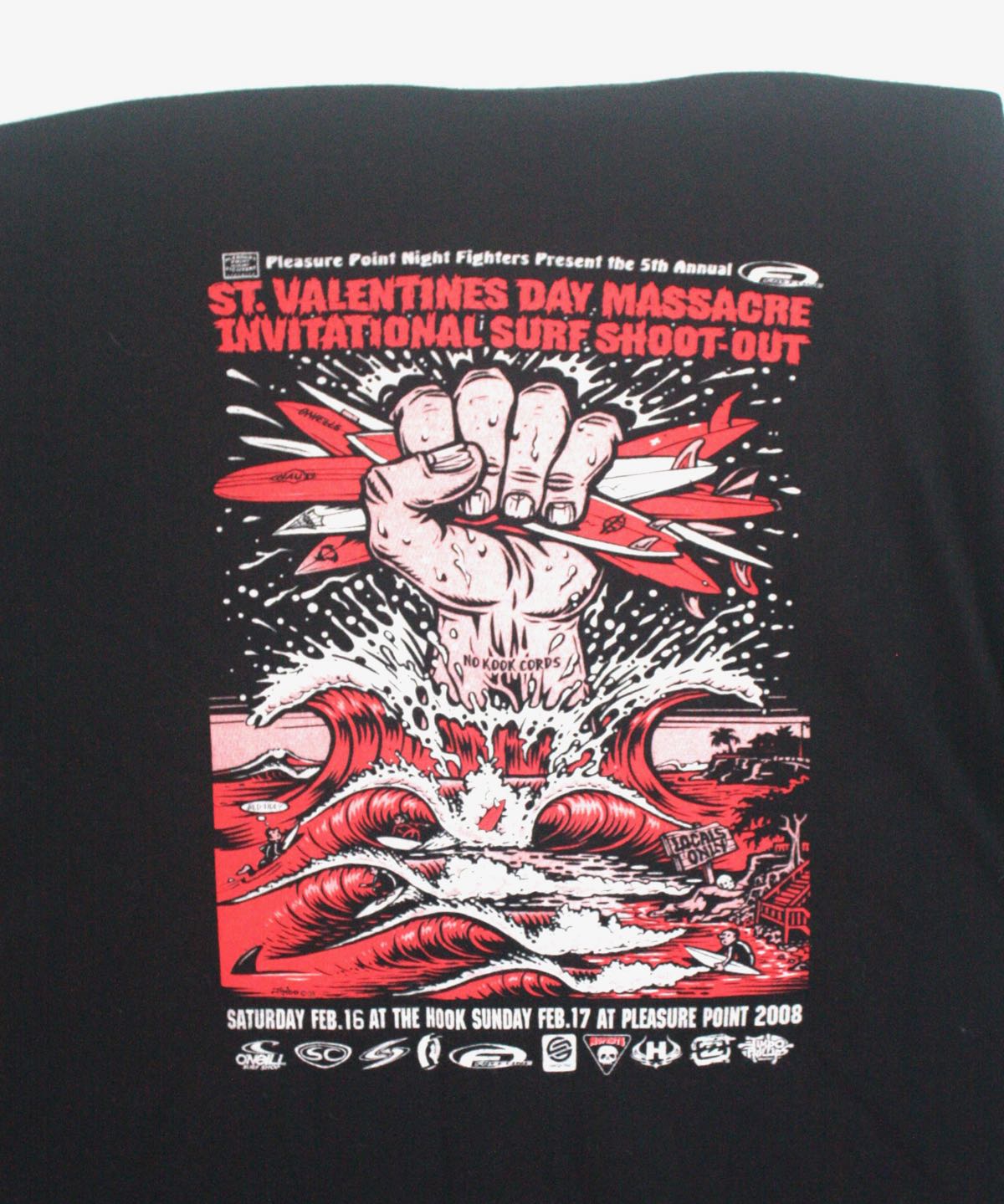 There’s nothing more local than a surfing tournament, especially if it’s locals-only and sponsored by a venerable surf club like the Pleasure Point Night Fighters (yes, there’s a story there.) Pleasure Point is home to a few famous surf breaks, and I have no doubt that Phillips himself surfs there. 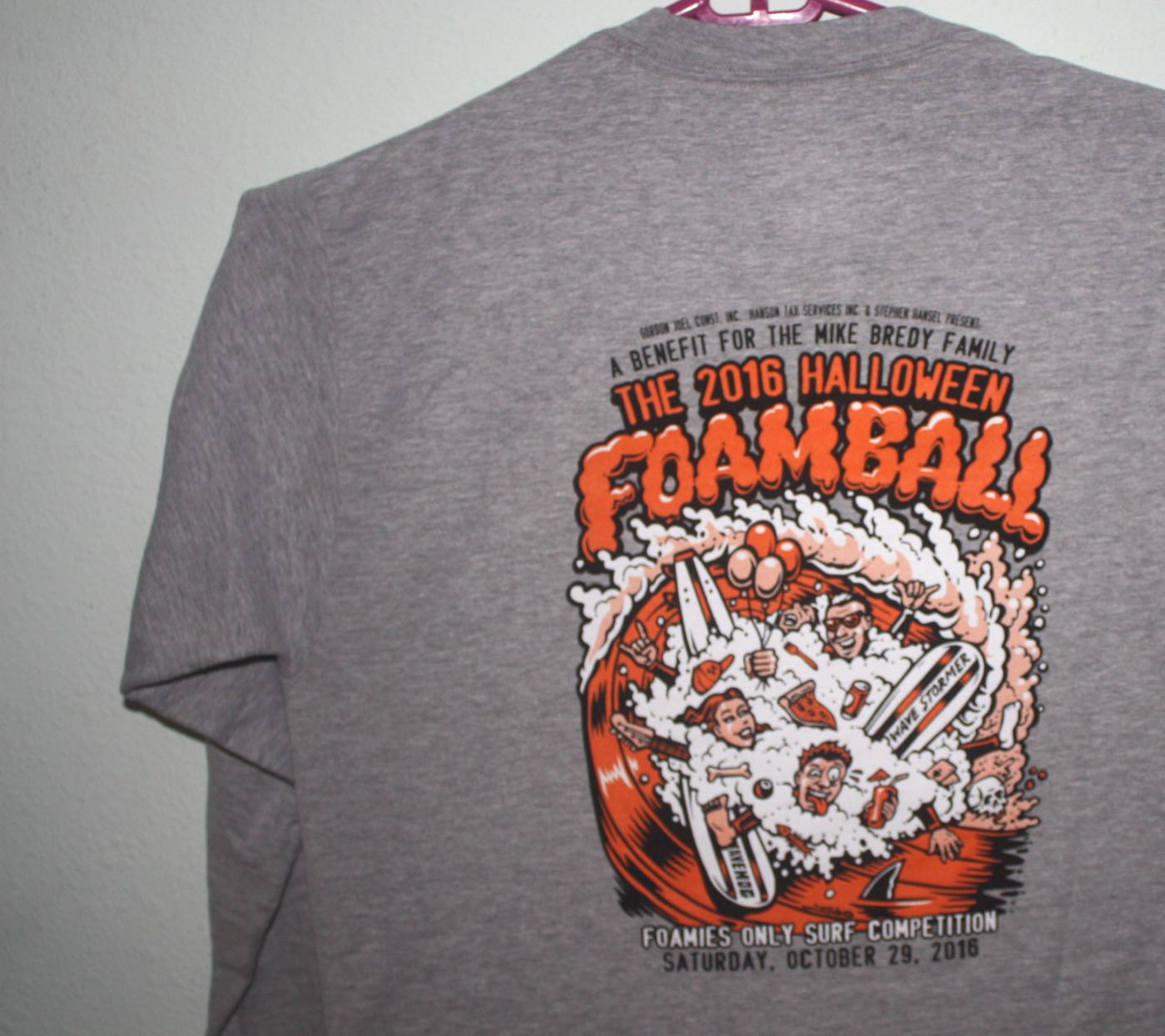 The Santa Cruz surf community is kind of wild and wooly, but when one of their own needs a kidney, they’ll pull together and put together a benefit to try to make it happen.  This Phillips tee was for a “fun” surf tournament that was largely a fundraiser. Apologies foe the picture quality; I’ll try to take a new one.

“Foam” refers to the cheap foam surfboards used in this tournament — the kind you can buy at the beach, that can also be used as skimboards.  They’re not for serious surfing, just for fun — which was the point of this tourney. 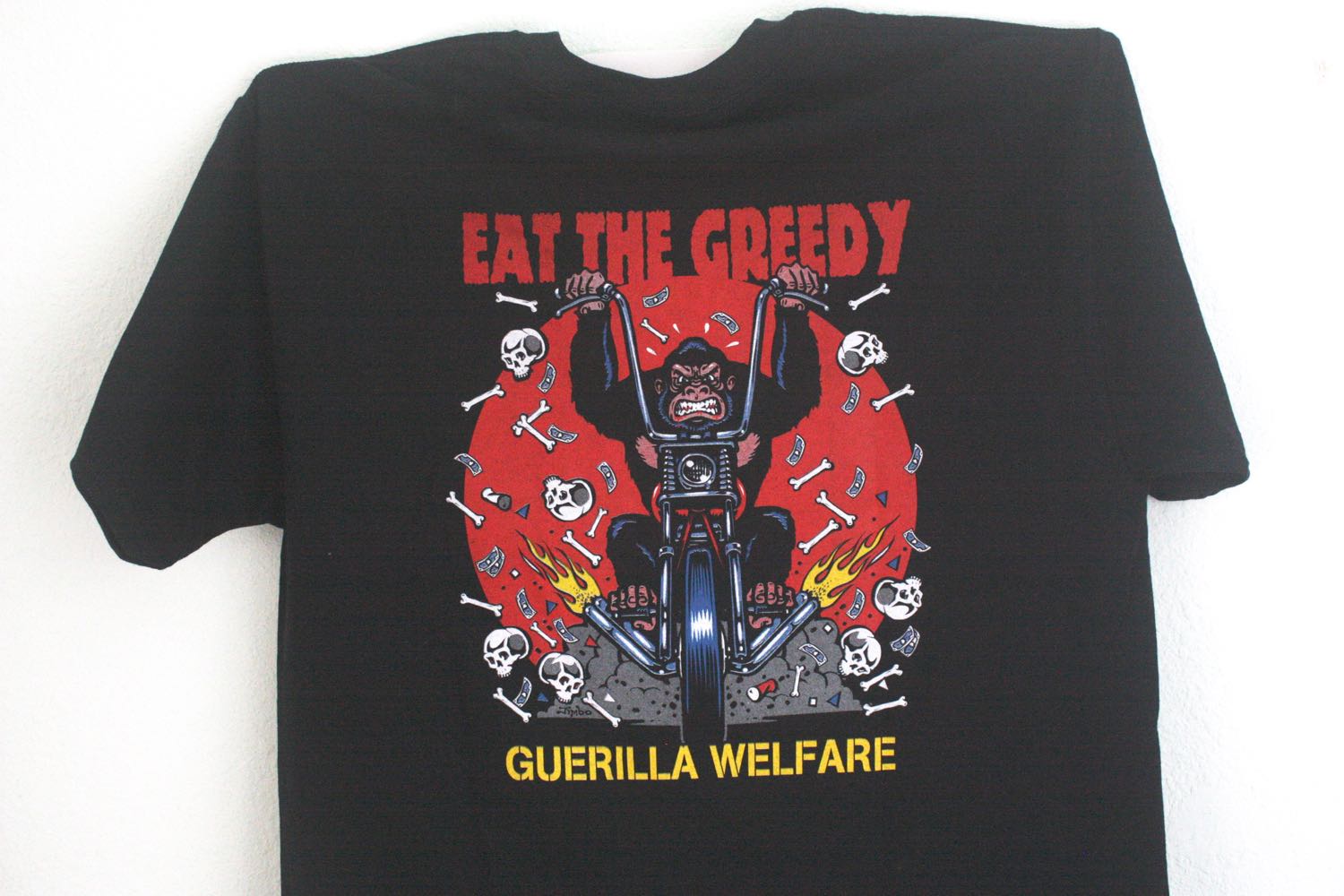 I’m not sure what the point of this one was.  Jimbo Phillips is involved with a local artists’ collective called the Made Fresh Crew, and sometimes they just do independent tees to sell.  This might be one of them.  He’s done his own line of tees in recent days that leans heavily to Rothian/underground monsters: giant eyeballs with fangs, drool, all that good stuff. 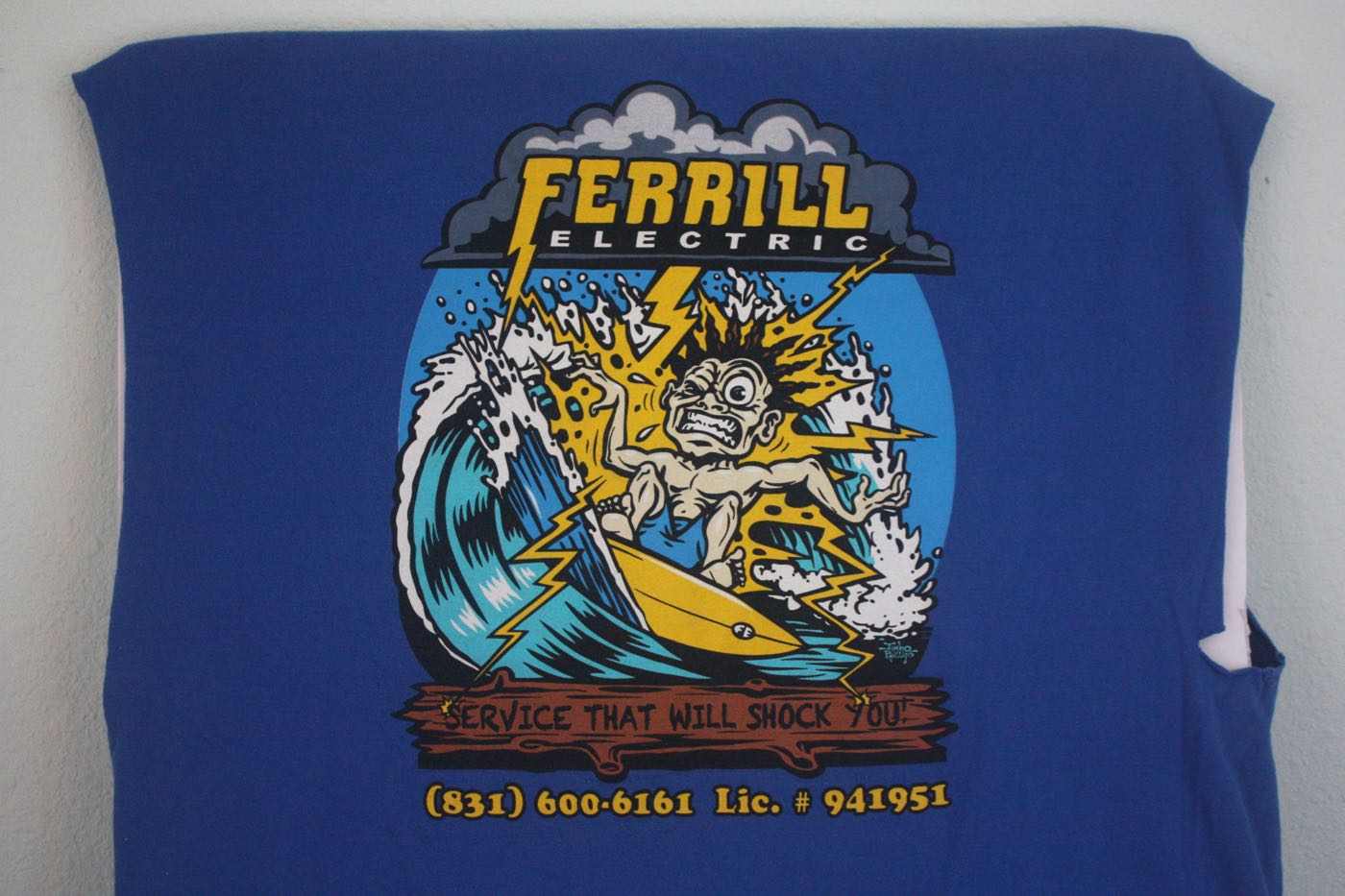 If you wonder why the surfing motif continues with this electrician’s tee, it’s because a ton of the tradesmen around Santa Cruz are dedicated surfers.  Electricians’ tees are also noted for bad puns.  I’ve got another one around here with the motto, “We’ll check your shorts.” 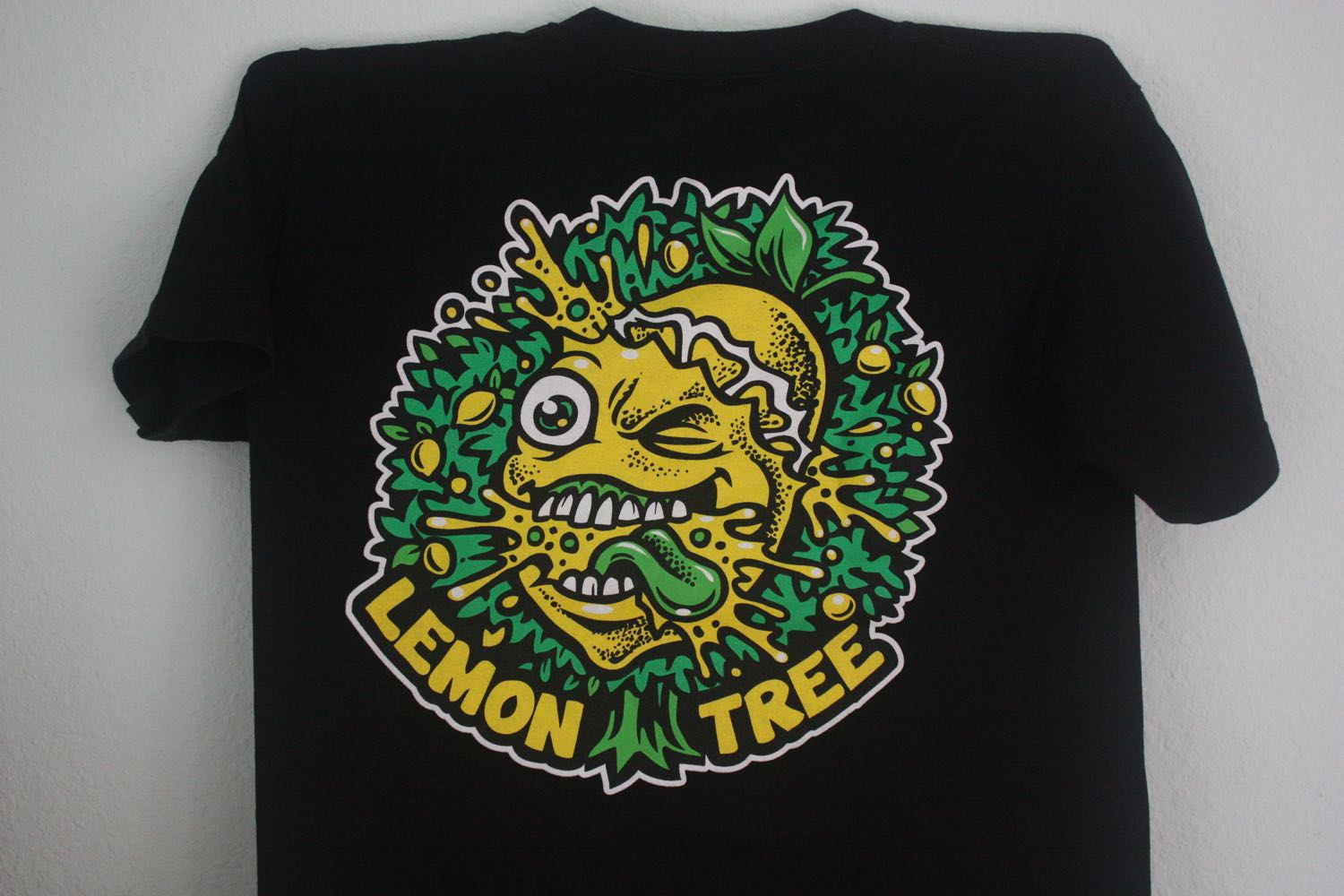 Lemon Tree is a brand of marijuana that tastes, well, lemony.  They hired Jimbo Phillips to do tees for a “Lemon Life” line of tees to promote their brand and”Lemon Life” and the “Lemon Lifestyle.”  It’s marketing. 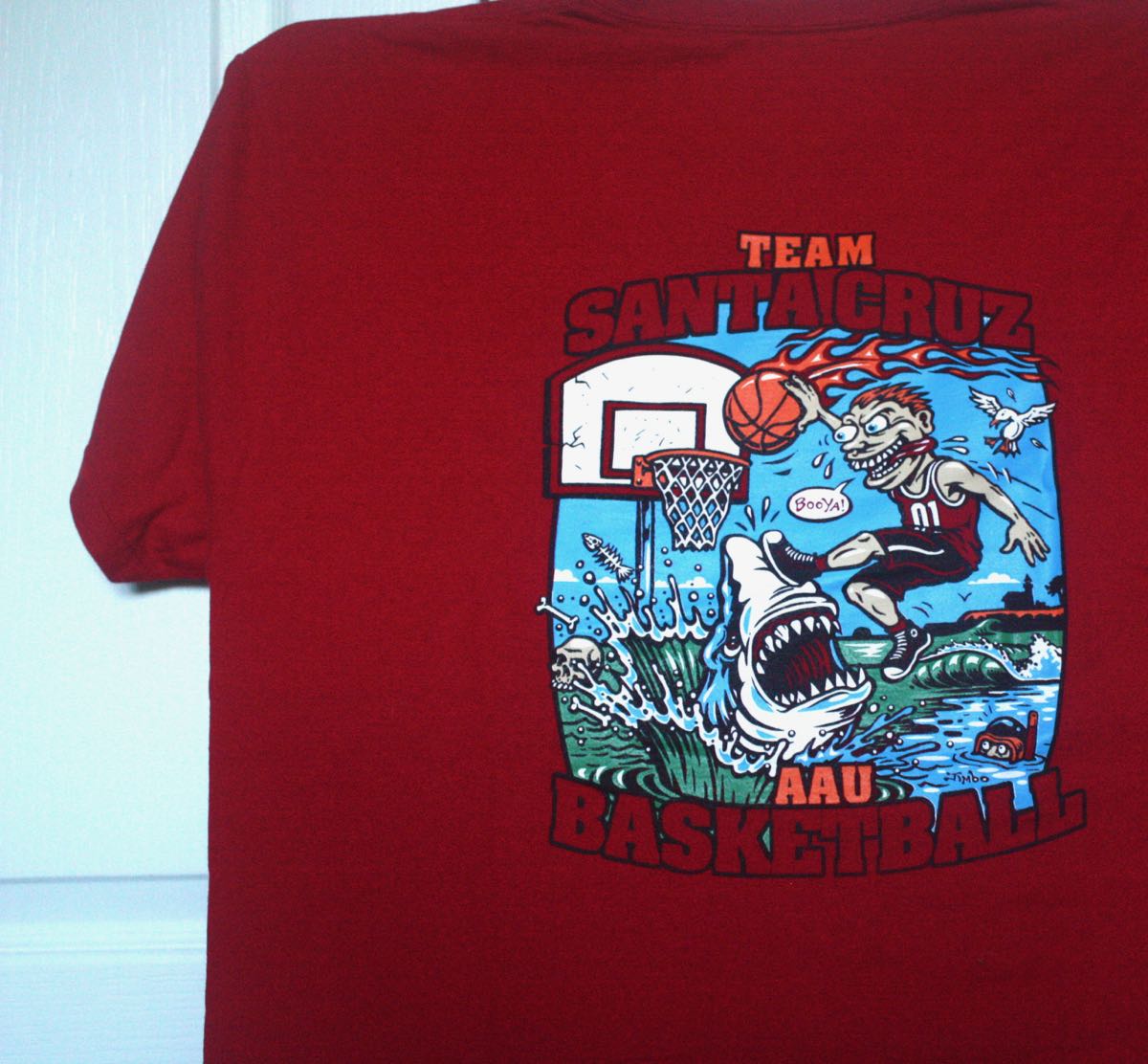 Phillips also does a lot of sports tees, like this one for Santa Cruz amateur basketball.  This tee has a lot of underground comix/Ed Roth attitude. 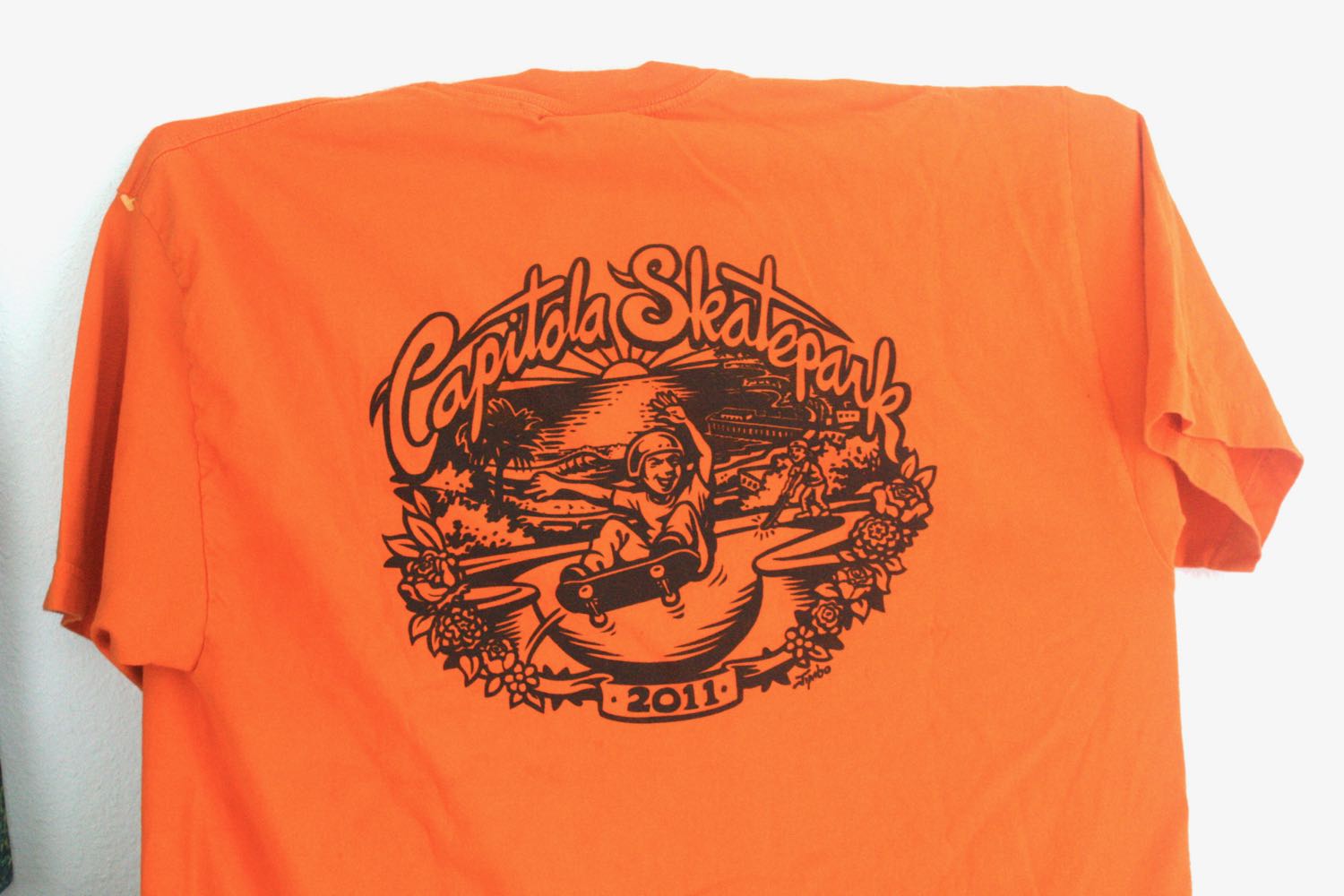 A new skatepark is a rare and precious thing in the Santa Cruz area, and it seems as if Phillips was commissioned to do a commemorative design.  Though a relatively low-budget one-color tee, this is actually one of my favorites.  It’s a nice, strong graphic, very evocative of a sunset in Capitola if you know the place.  The orange tee was well-used in place of a second ink color. 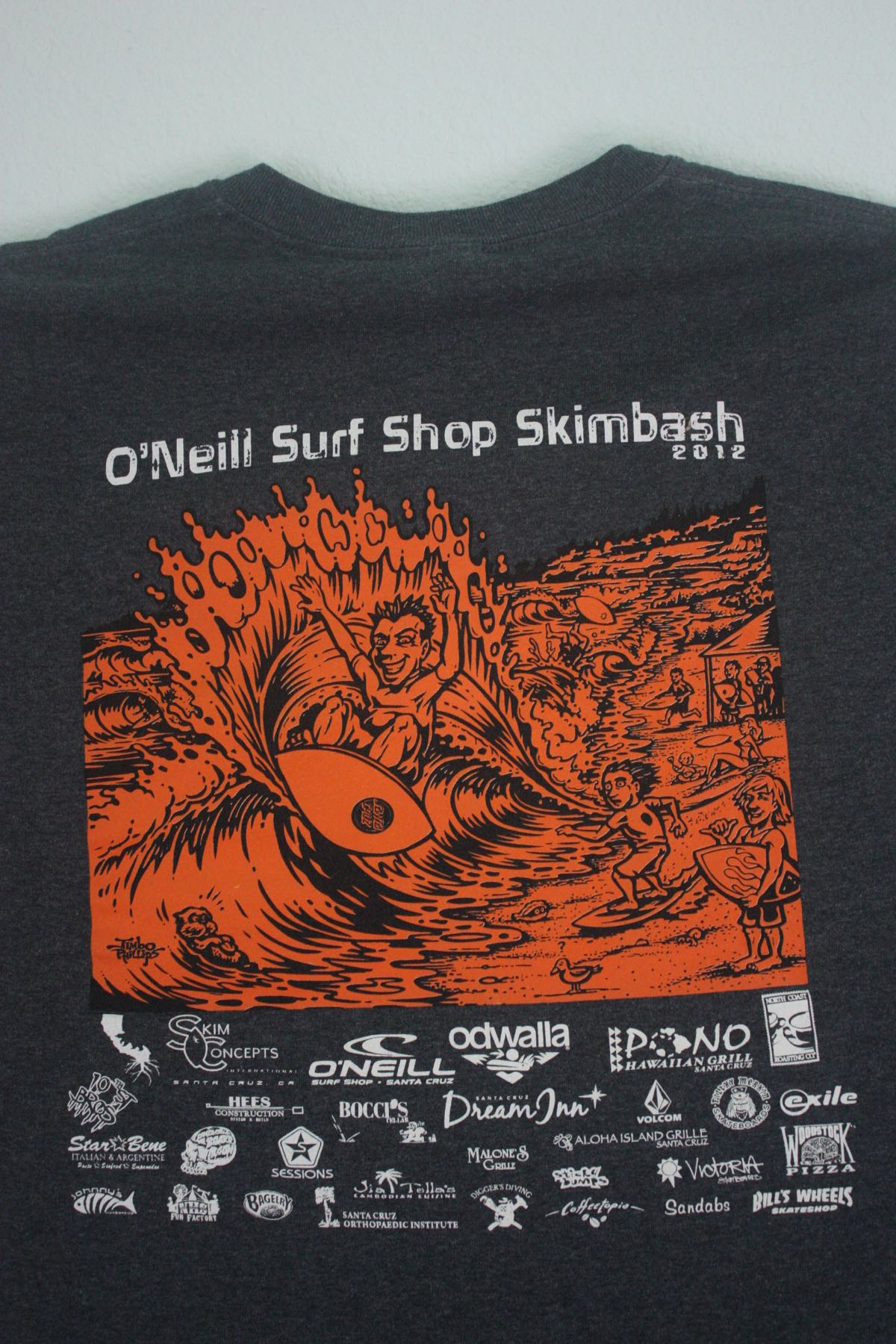 One thing you’ll see on many of Jimbo Phillips shirt is what I call the Jimbo Leer: the semi-malicious grin of a teenage male enjoying himself to excess and living the adolescent dream of power and rebellion.  Here’s another; 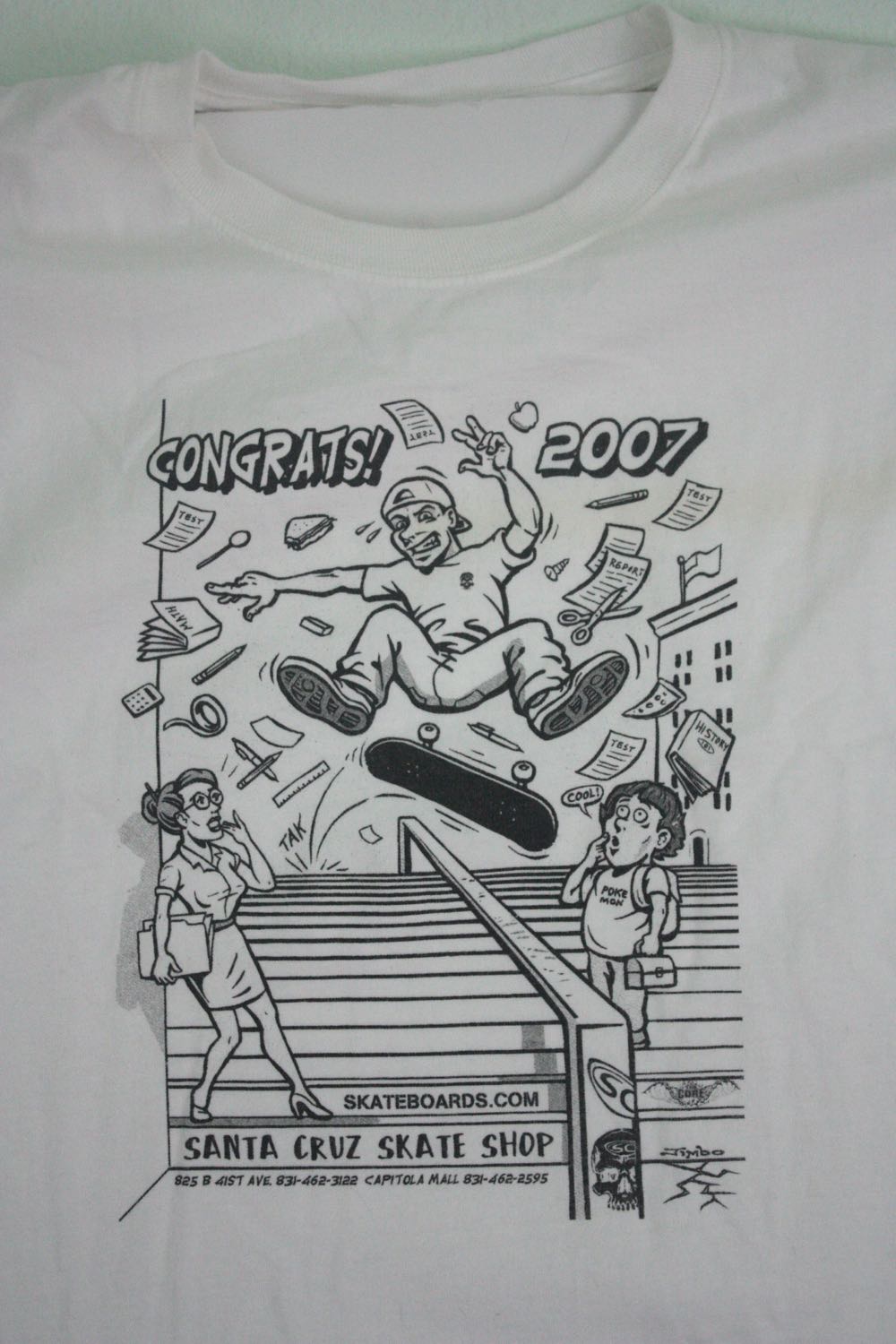 The tee below, for a local barbecue joinr, I’ve used in other posts.  But I’m repeating it here because it’s a truly awesome Ed Roth homage and also has that wondrous leer of rebellion and abandon. 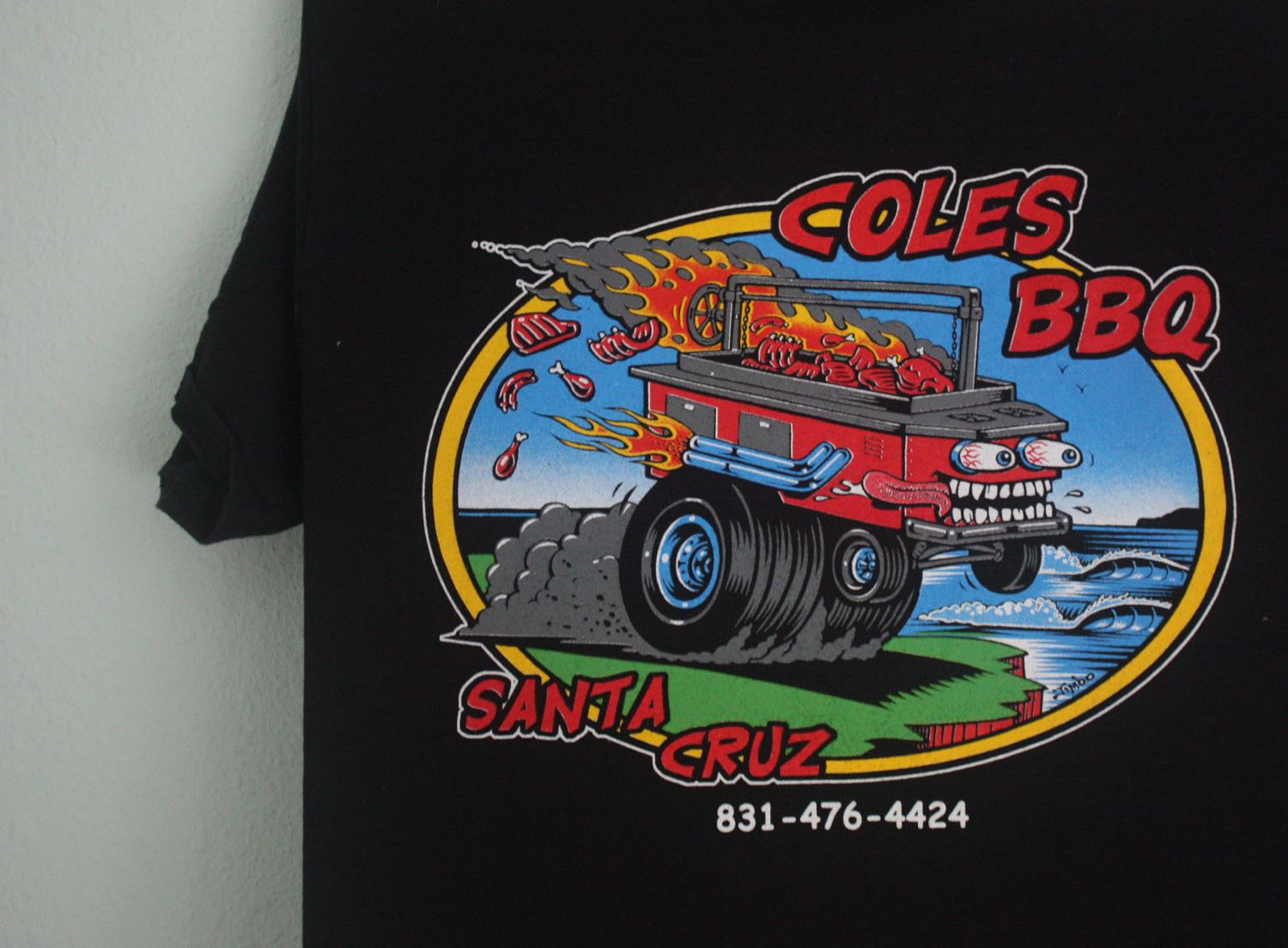 The tee below is actually rather old, commissioned of Phillips by local disk drive maker Seagate to have some cool to bring with them to Austin’s SXSW music/media happening about 20 years ago. 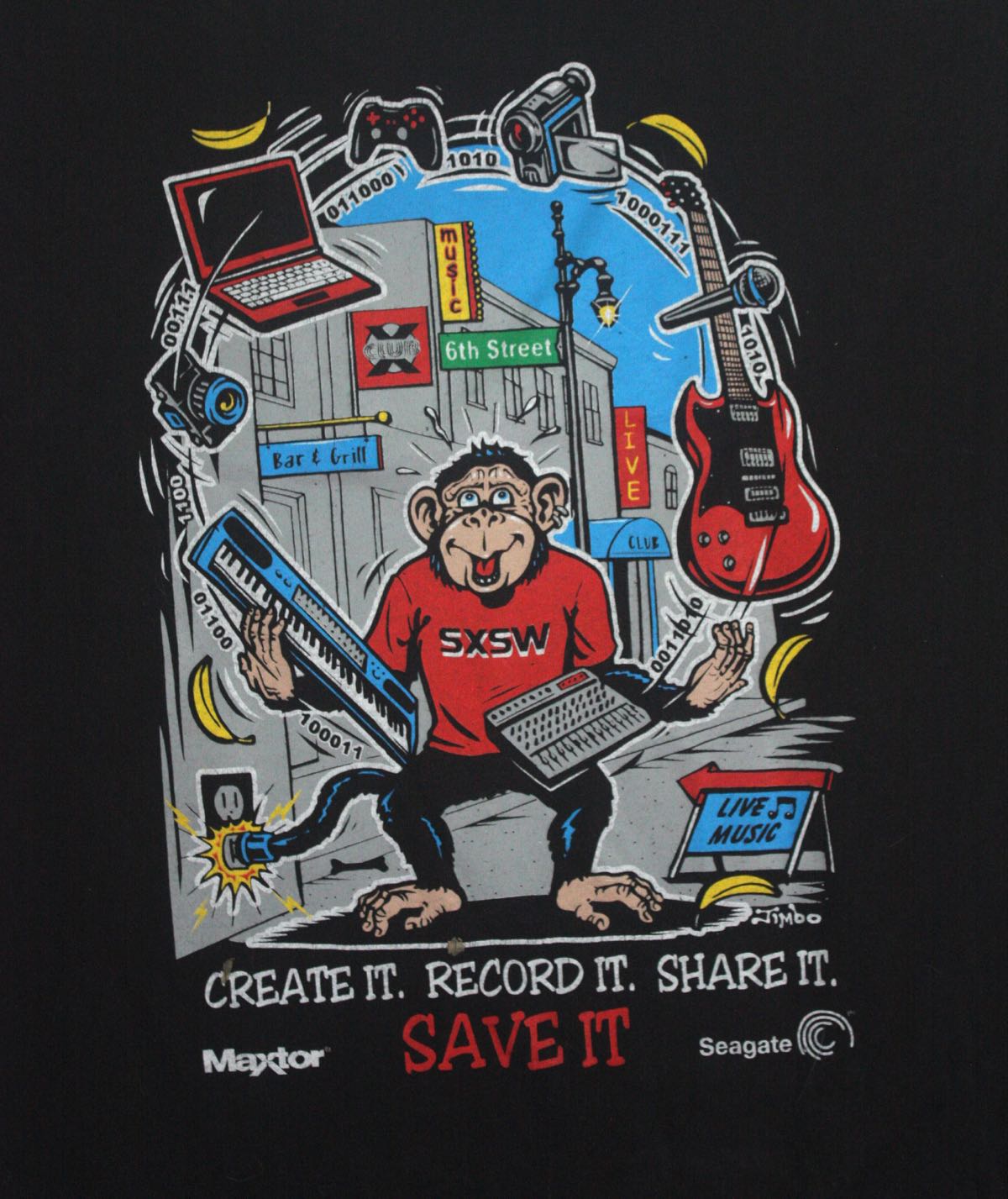 I worked for Seagate in those days, and their vision of the future was a media server in every home: siitting quietly in a closet and holding all your movies and music and pictures and books and games, standing ready to serve it all across your home network at any time.

And that was a future that didn’t happen.  It’s all about streaming these days, and the Cloud, and hooking it all directly into your skull through your smartphone or tablet. Oh, well. 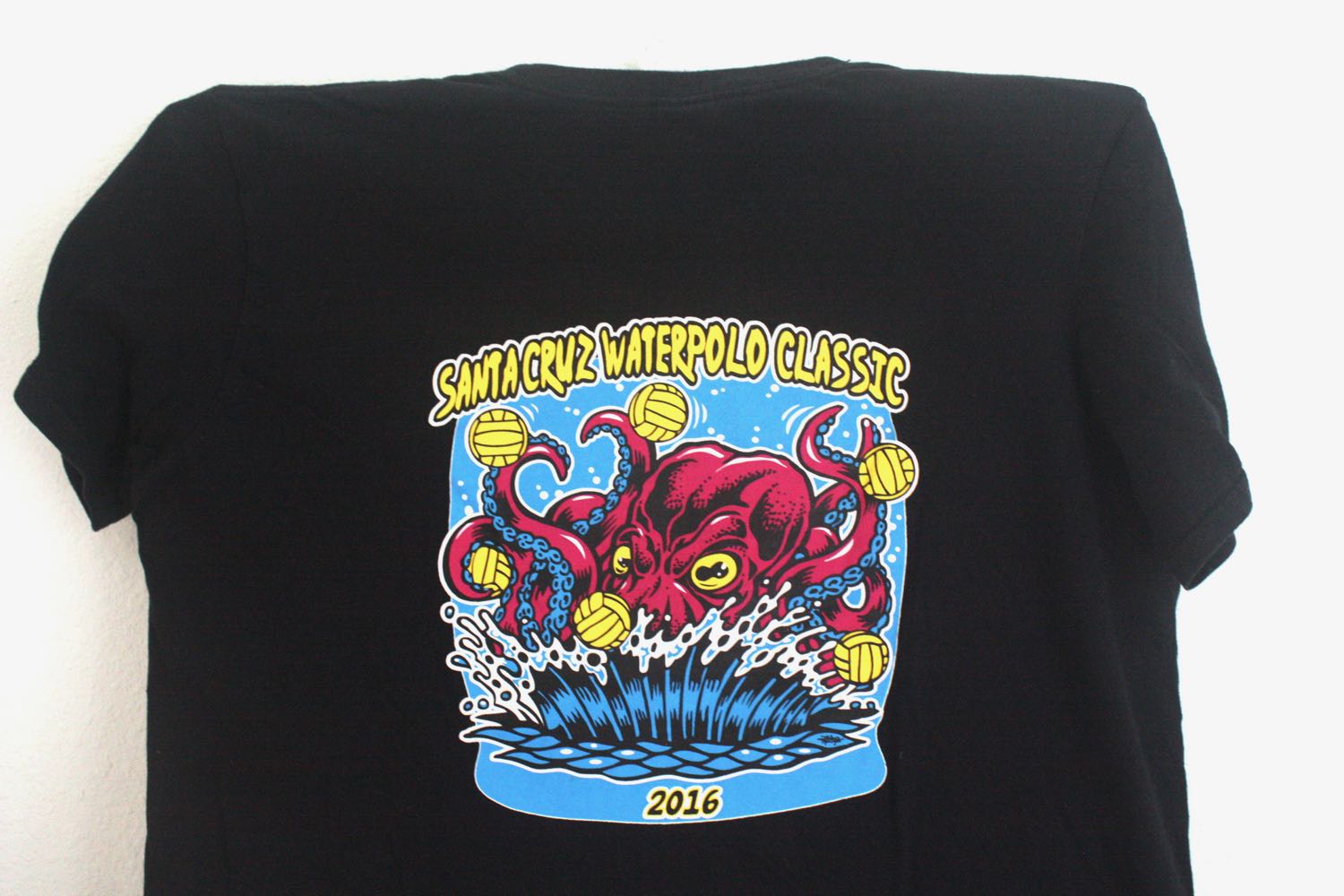 That’s about it for now.  This is only about two-thirds of the Jimbo Phillips shirts I have, and I keep finding new ones.  A working artist has to keep busy, and he does: showing Santa Cruz the way it wants to be seen.

2 thoughts on “Tee Shirts from the Collection: The Jimbo Phillips Gallery”