The University of California at Santa Cruz had no official mascot for its first few decades: just a yellow slug that crawled along the forest floor.  And everybody loved Sammy the Slug. T-shirts followed shortly thereafter. 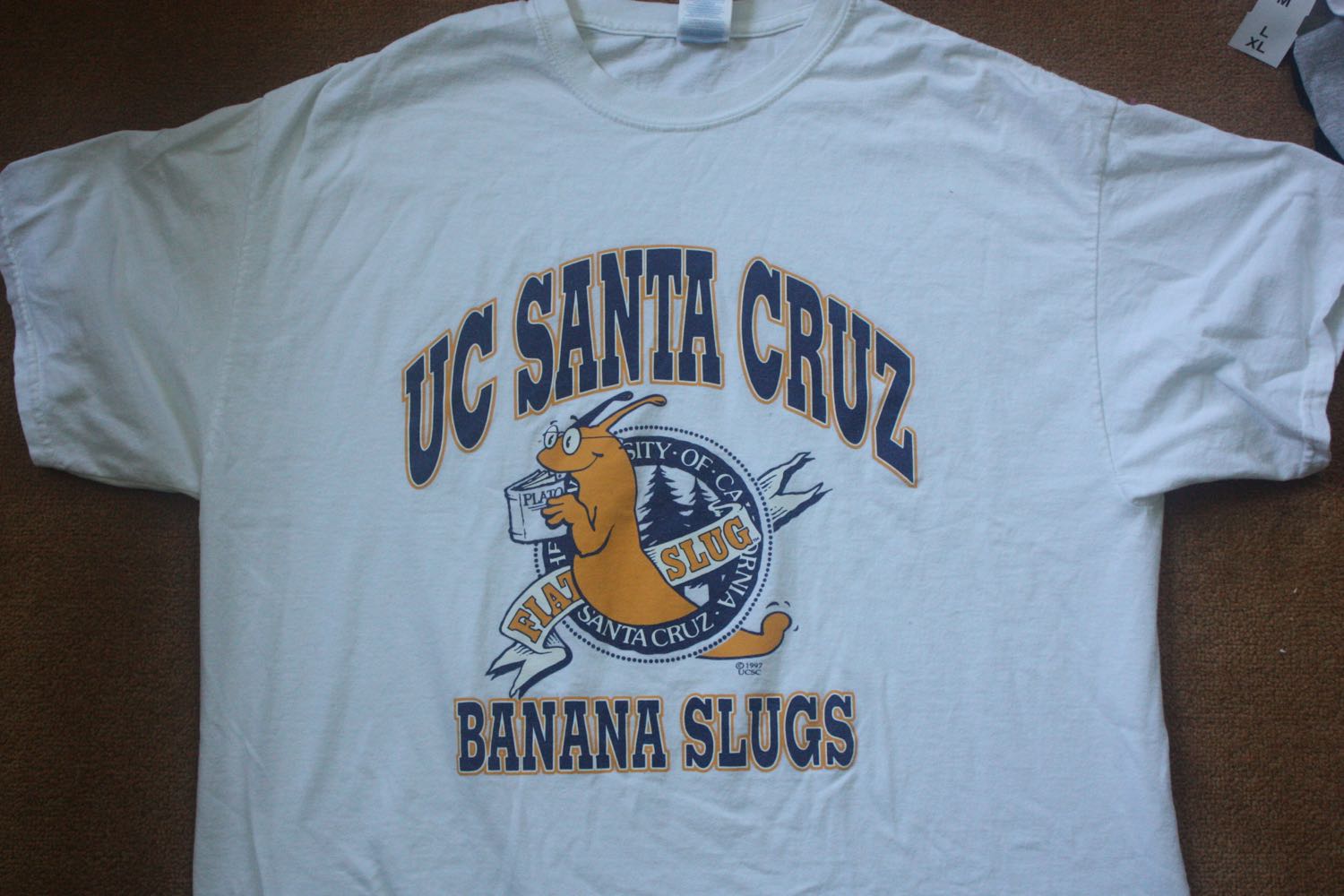 This Sammy Slug tee has been in print since the ’90s; earlier versions of Sammy looked a lot like this: cheerful, bookish, sometimes laid-back.

The banana slug (Ariolimax dolichophallus) was the people’s choice — if by “people” you mean the counter-culture, save-the-world students of a quirky, experimental UC campus build on a hillside.  In a redwood forest full of bright yellow banana slugs.  Above a beach town with a roller coaster. The campus’ unofficial volleyball team called itself the Banana Slugs as early as the 1970s.

UCSC students and faculty were anti-authoritarian, and want no muscled sports gladiators called “Hawks” or “Bears” to represent them.  Sports should be for everybody to take part in, they thought.  so for them, the Banana Slug made a perfect mascot: yellow, mellow and harmless.    And thus the mellow students began calling themselves Slugs. 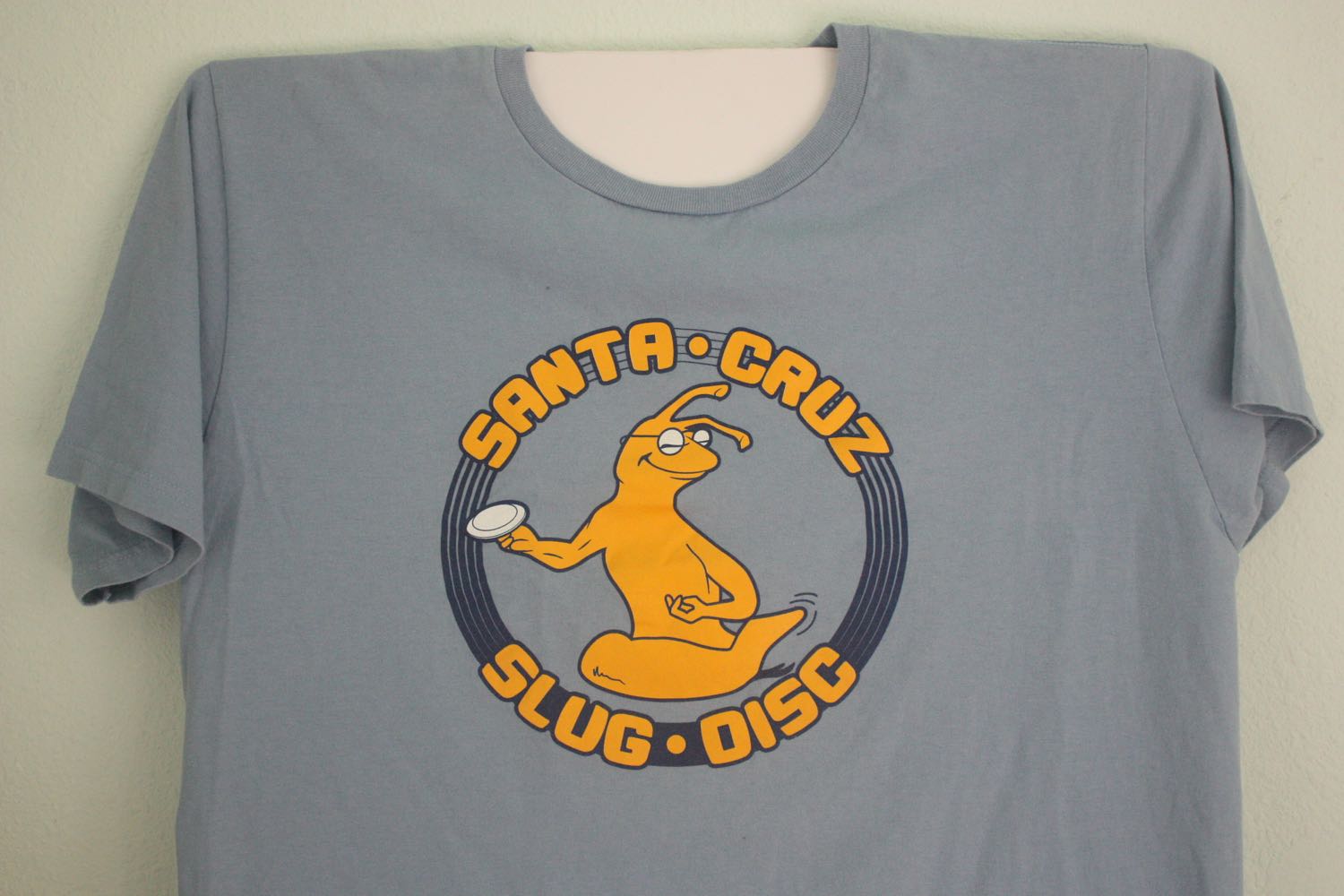 Eventually UCSC grew large enough to support  sports; some students wanted them.  The university chose a few of the less gladiatorial (and less expensive) ones: men’s and women’s basketball, track, swimming, and so on: but not football. There is no stadium at UCSC.

Intercollegiate sports required an official mascot:  so the administration told the students that they were all now Sea Lions. 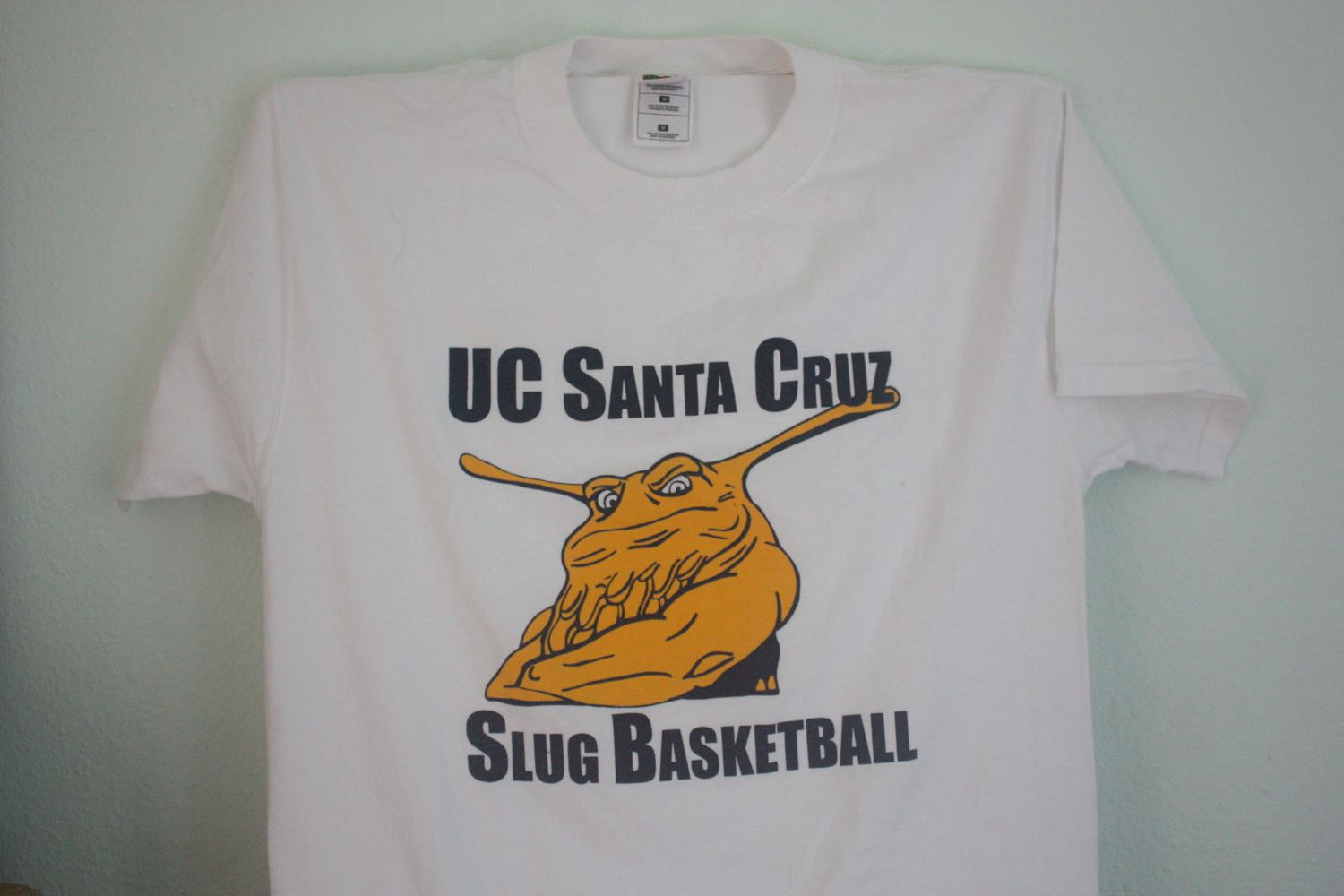 The intercollegiate teams insisted on a “tough” slug. This version of Sammy is called “The Athletic Slug.” But I think of him as “Steroid Dominator Slug.”

In the end, that didn’t fly. Ad UCSC students and their teams officially became Banana Slugs, or just Slugs.  And the slug became Sammy.  And people do all sorts of things with him. 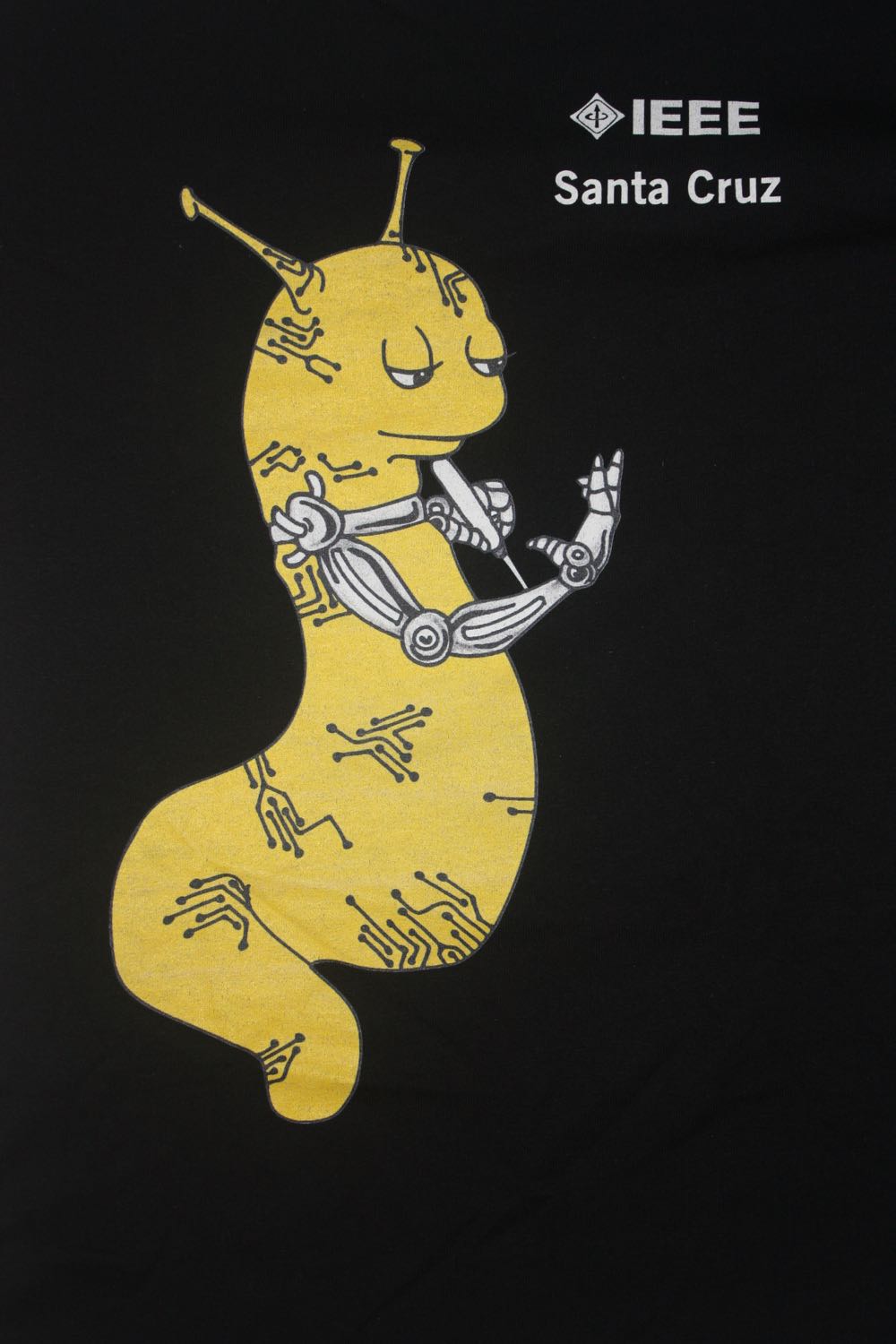 This tee comes from the student chapter of the Institute of Electrical and Electronics Engineers (Also known as I-Triple E). Bioengineering and the like is big at UCSC; there are many electronic Slugs. 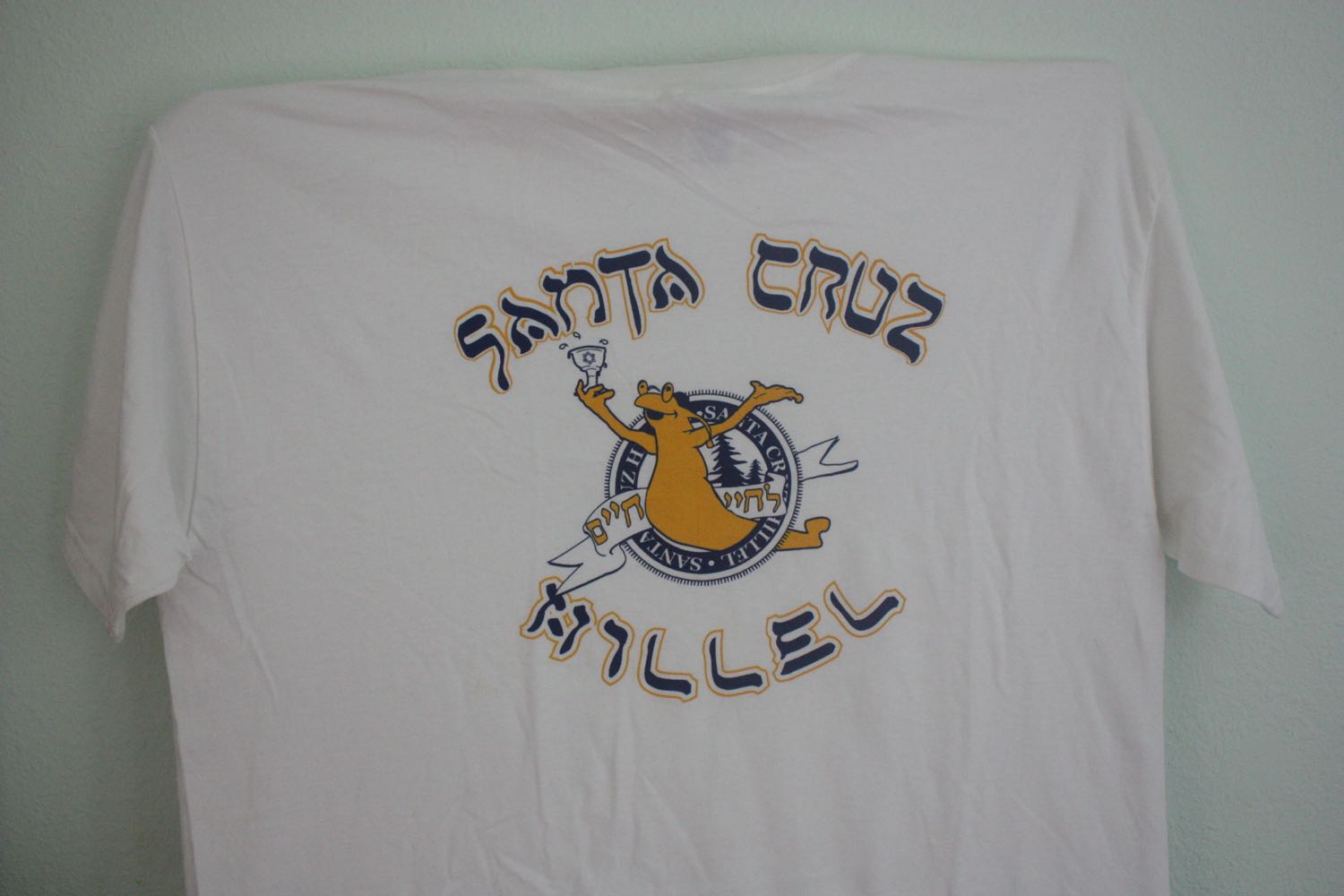 Other clubs and organizations also make Sammy their own.  I favor this t-shirt from Santa Cruz Hillel, the Jewish campus organization.  Sammy in a prayer shawl and yamulka, calling out to God? Why not? I’ve yet to see a Christian group put Sammy on the cross, but it might be out there. 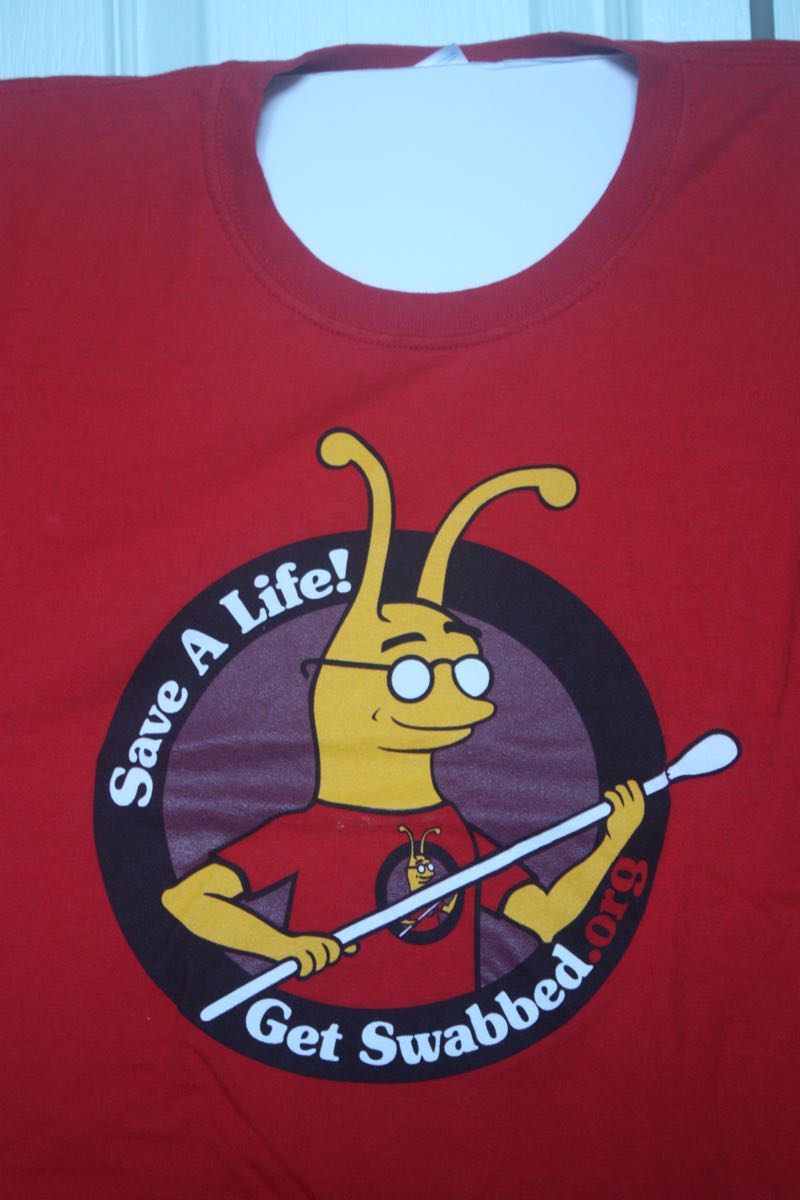 Not to be missed is the curiously unsettling Giant Q-Tip Slug.  Keep in mind that a slug is only ten inches long or so, max, and the Q-Tip becomes less threatening.  It’s from a campus program that recruits students as blood marrow donors; a swab inside the cheek harvests the cells needed to classify your marrow. 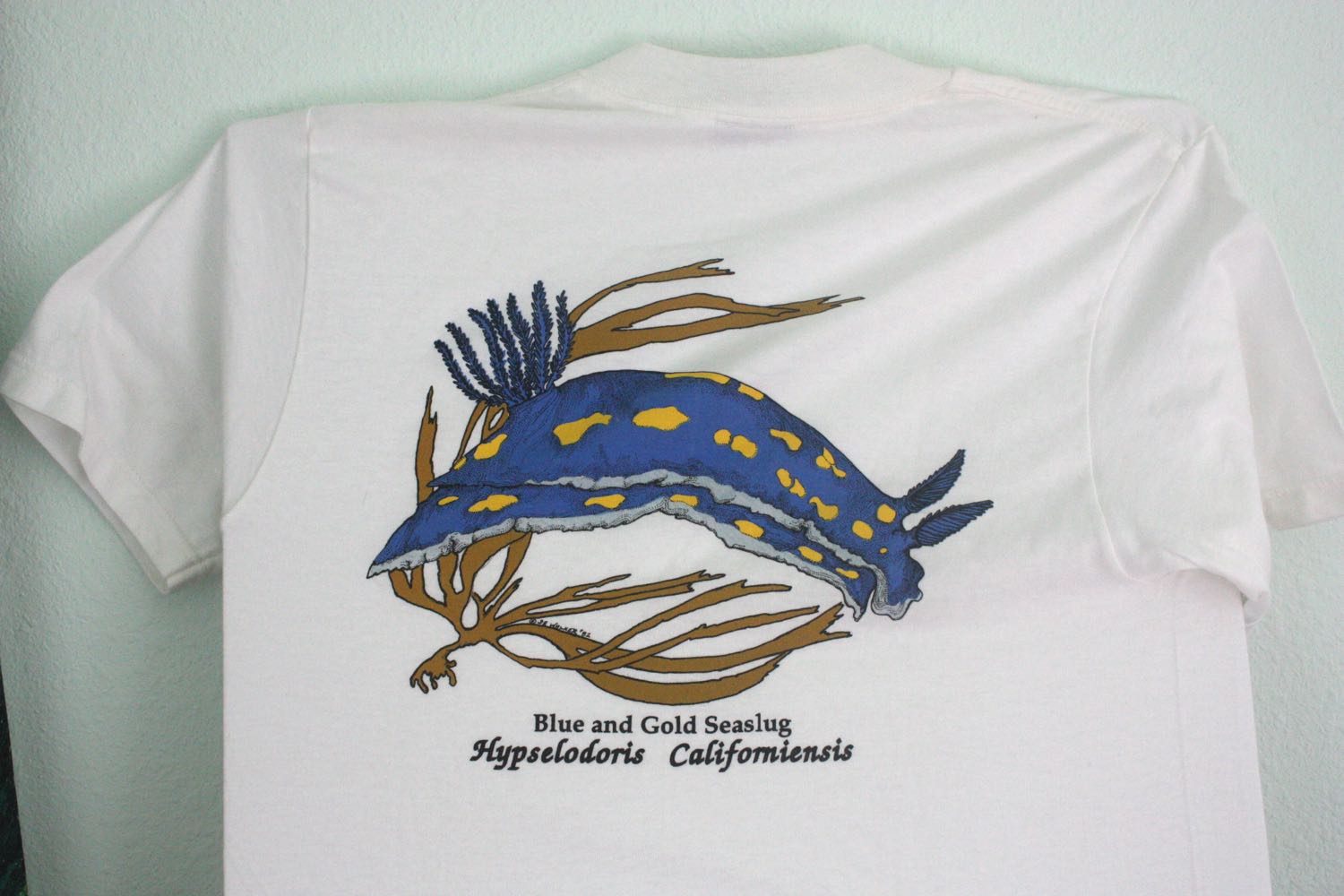 Marine biologists have their own idea of what the slug should be.  With this tee, the Marine Sciences Department down at Long Marine Labs honore Hypselodoris Californiensis, the Blue and Gold Sea Slug.  The University of California’s colors are blue and gold, so that makes Hypselodoris part of the campus family. 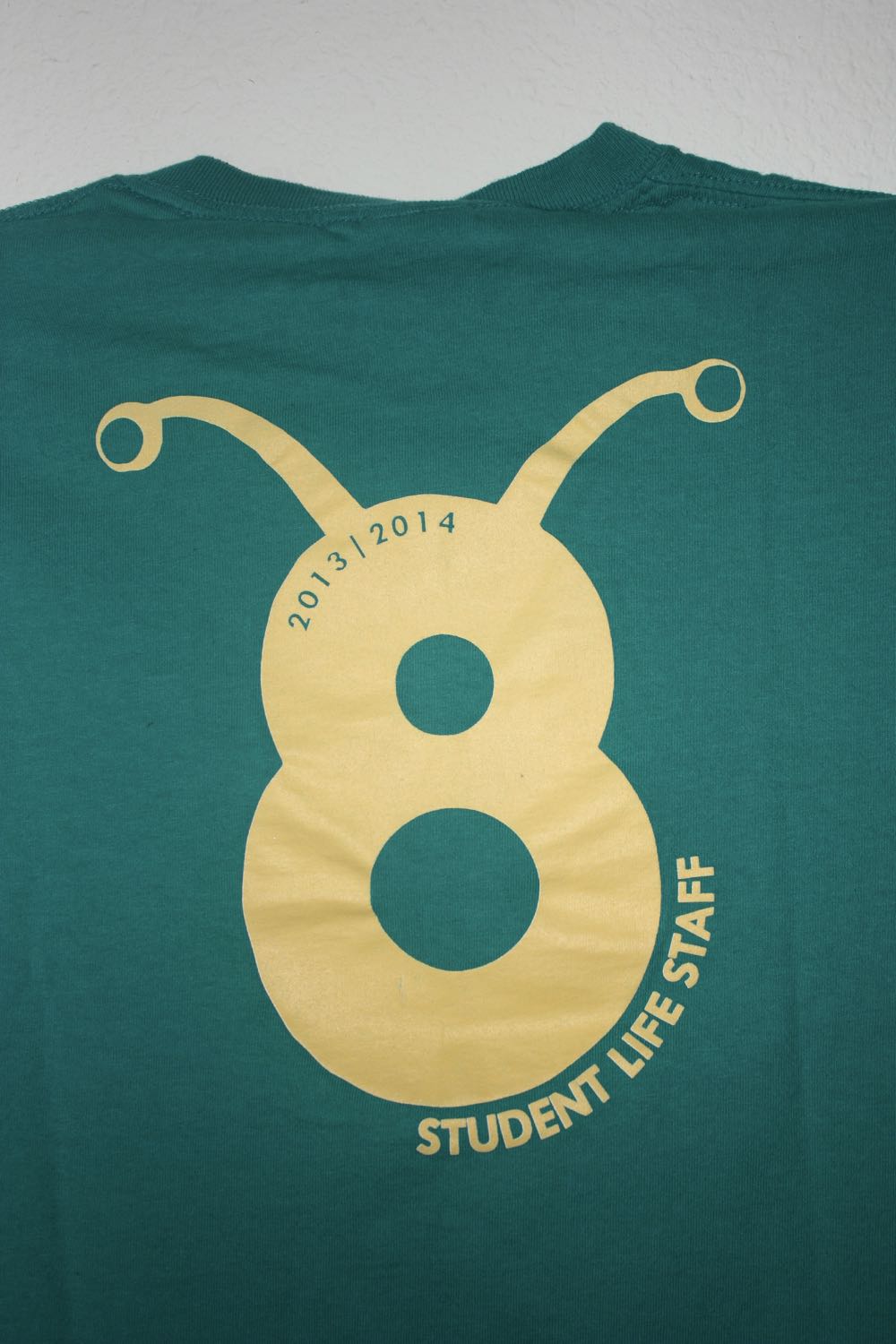 Look, it’s a giant yellow “8” with slug feelers.  UC Santa Cruz students are split among ten residential “colleges,” each with its own core programs and activities and theme: science, engineering, the environment, internationalism, and so on. And once upon a time, there was a College 8.

A college is a discrete group of buildings, dorms, meeting spaces, and grounds; when they’re newly built,  colleges are given a number, not a name. Eventually some J. Wellington Gotrocks comes along and makes a mighty donation to a college: in the millions. For that, they get naming rights. UCSC College names include Cowell, Stevenson, Crown, Merrill, Porter, Kresge, and Oakes. 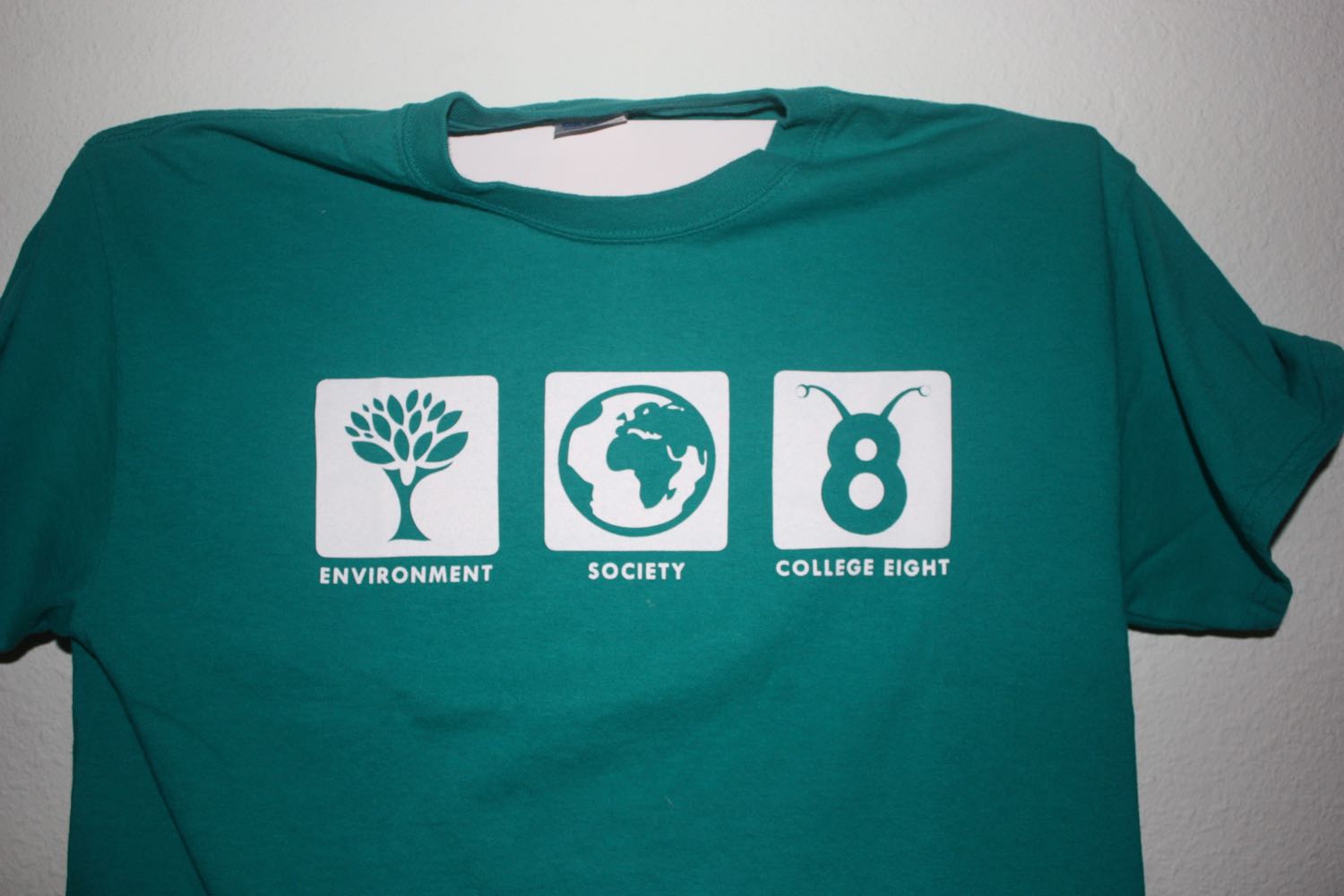 That donation can be long in coming.  After it was built, College 8 remained but a number for many years.  The students came to accept the number as an honorable name: College 8 was their academic tribe, and their home.  So it was “Long Live College 8,”  which was and is the college of environmentalism and sustainability.

Eventually a wealthy donor came along and bequeathed an awesome sum to the many needs of College 8.  And the college finally got a real name.

The donor and the university settled on the name  “Rachel Carson College,” after the author and marine biologist whose book “Silent Spring” helped launch the global environmental movement.  And quite a good t-shirt was produced for the occasion. 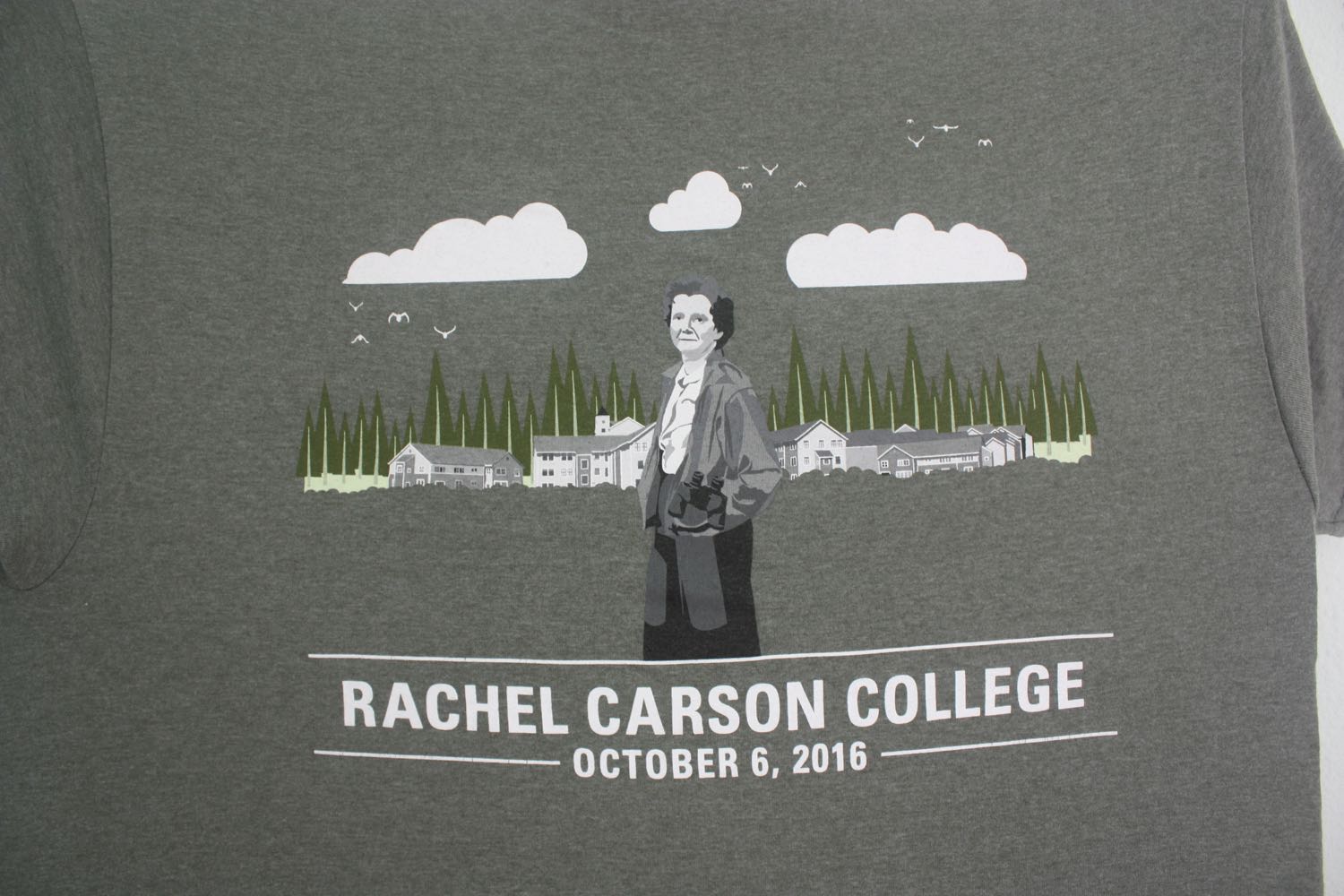 There are those alumni who say, “It’ll always be College 8 to me!” Who can’t respect that?  But “Carson,” as newer students call the college, is now a well-accepted name.

By the way, UCSC still has a College 9 and a College 10; they’ve been waiting eighteen years for their permanent names.  The possibilities are endless.  Empty that change jar in the kitchen and get in on the ground floor.

Here are a couple of more UCSC shirts, just because. 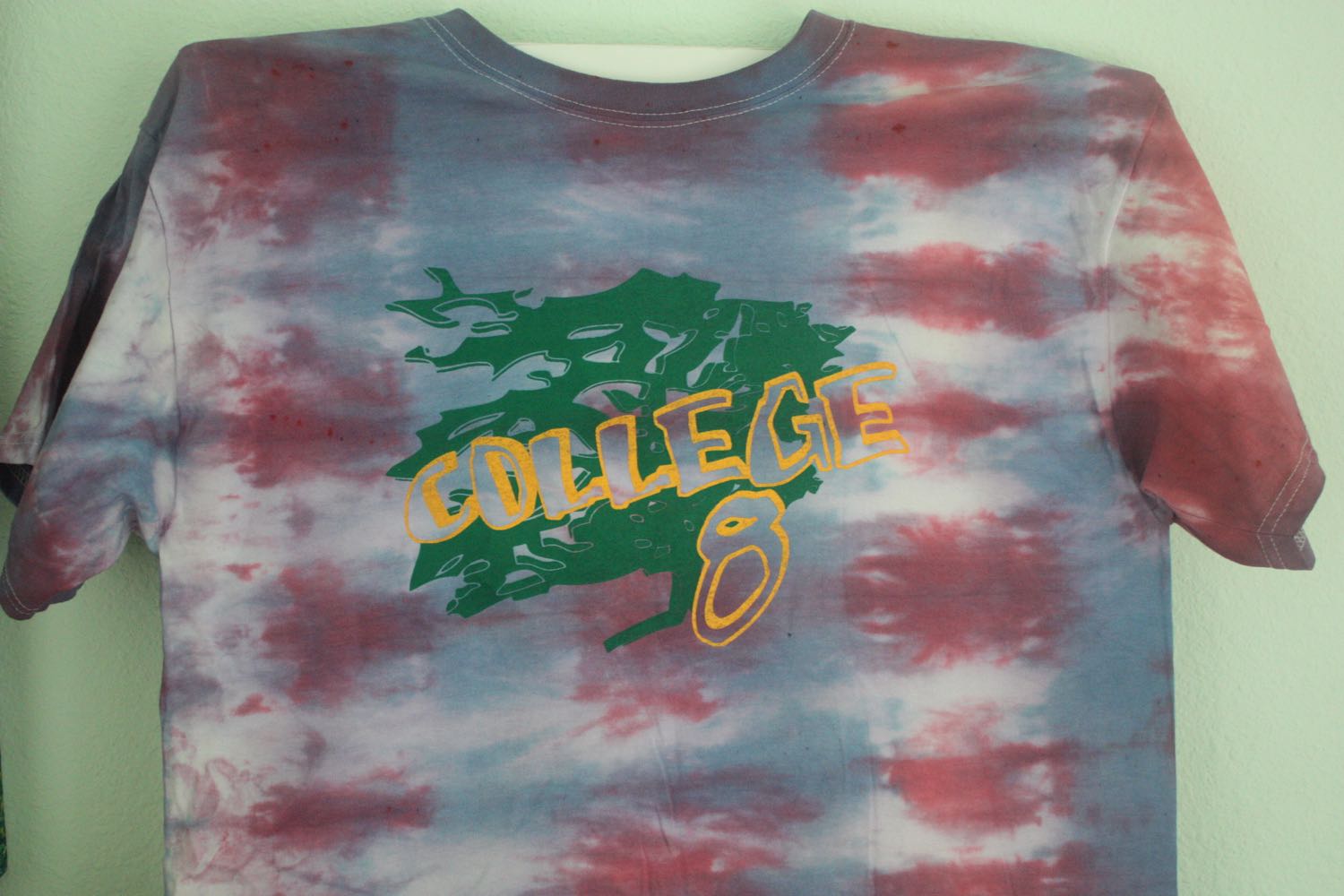 Tie-dye harkens back to the ’60s; so does UCSC, making tie-dye practically the school colors. Tie-dyed tees have been printed for many of the colleges. 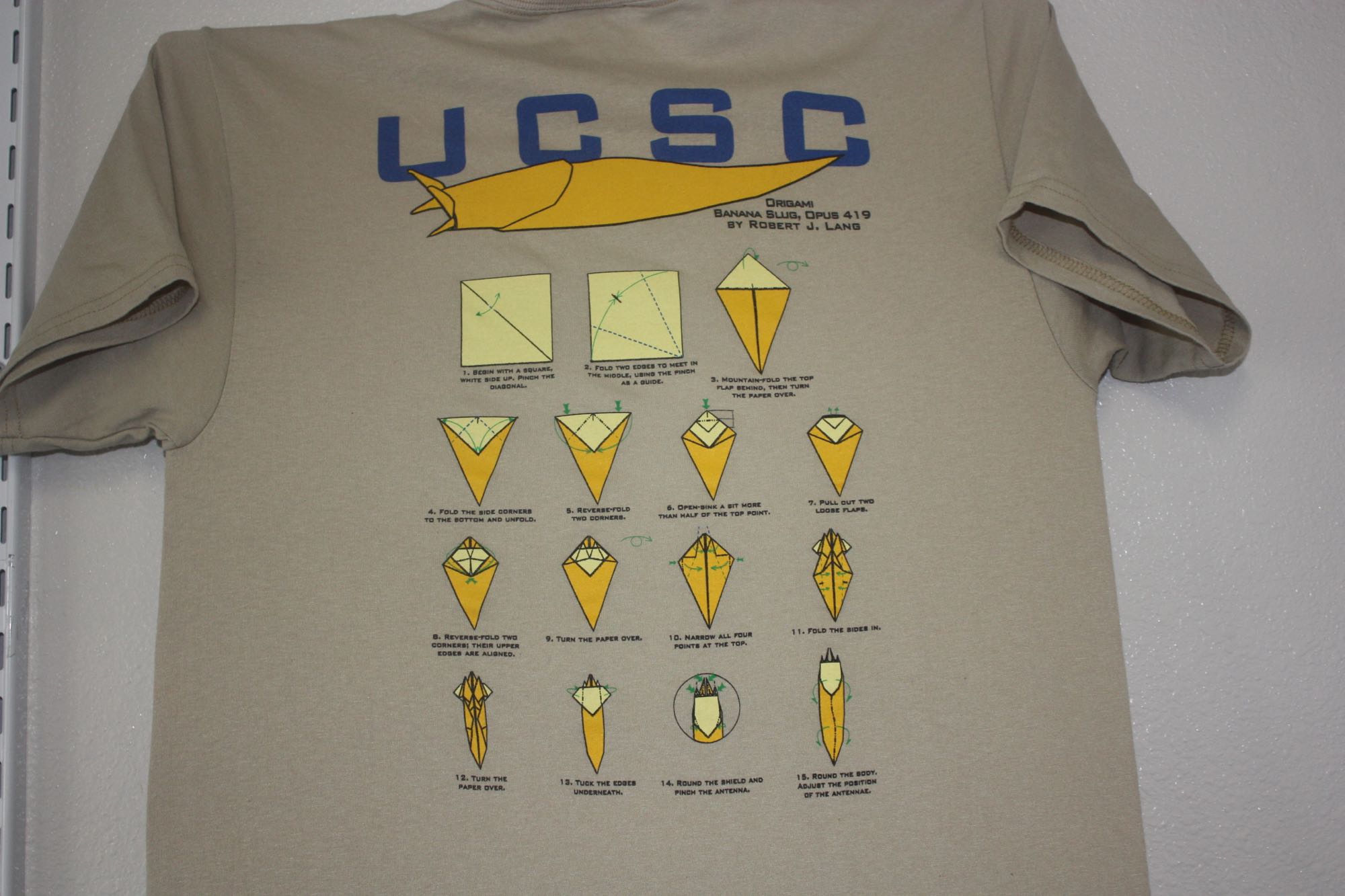 A slug is a moderately easy animal to sculpt; even in paper. This t-shirt is a wearable instruction manual for the manufacture of origami slugs.

2 thoughts on “T-Shirts from the Collection: The Many Faces of the Slug”