I’ve already written on skull t-shirts, but there are so many skull t-shirts in my collection that — well, welcome to Part 2. America still loves its skulls, and there’s much to talk about. 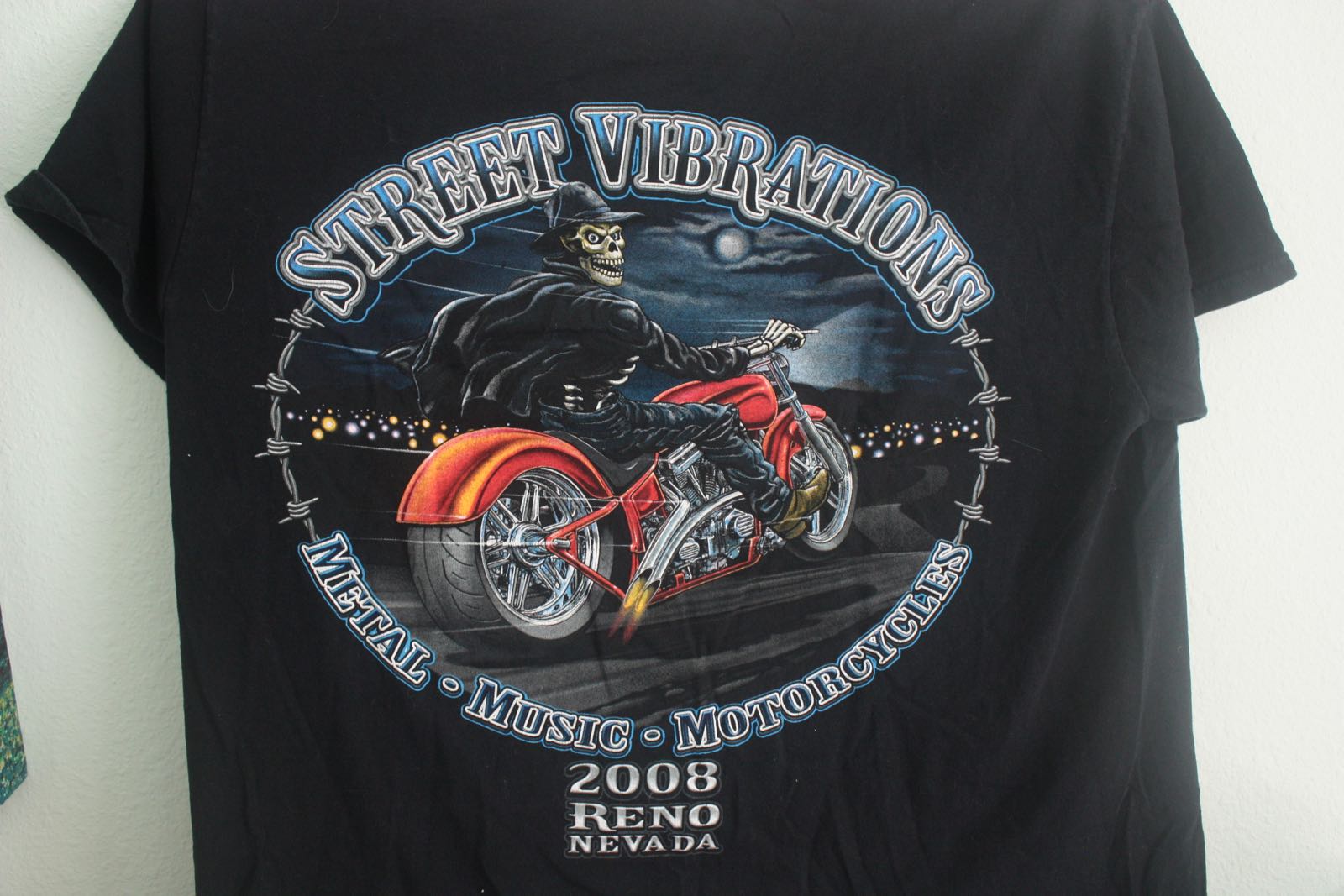 To recap the previous article, skulls were originally a sign of danger or death or outlawry; no one would wear one on their clothing.

Except outlaw motorcycle gangs.  To them, skulls were a sign that they rejected all norms  — and that you shouldn’t mess with them.  The  Angels in particular gained attention in the ‘60s thanks in part to Hunter Thompson’s bestseller “Hells Angels: A Strange and Terrible Saga.” Thompson drew a picture of a complex subculture based on freedom, rejection of society’s values, internal discipline, bravery, and of course violence. 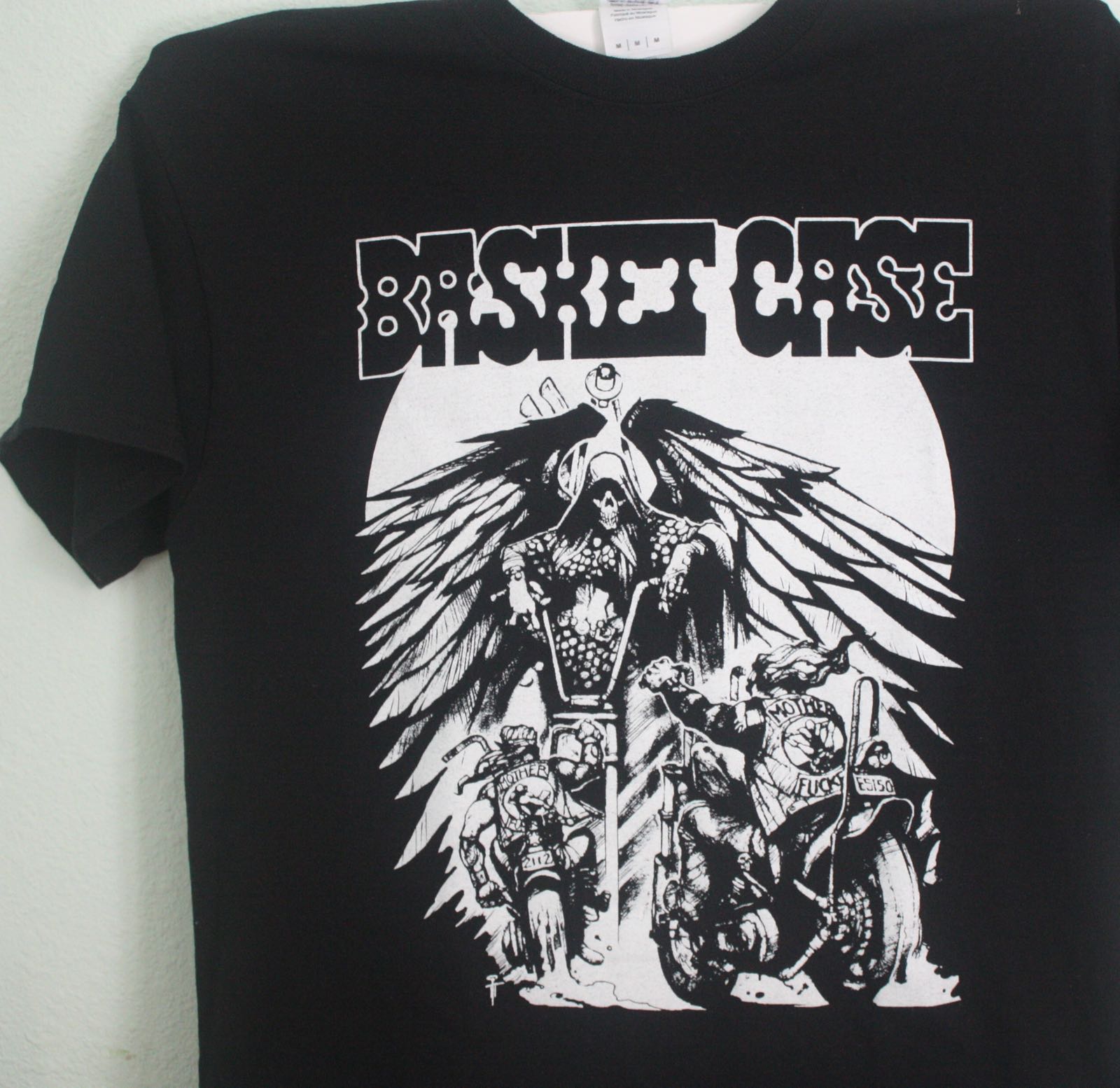 “Basket Case” is a Santa Cruz-based cycle mag about Norcal chopper riders, clubs, and activities. No outlaws they, but they still offer this tee design of tough “Mother Fuckers” charging Death himself. The artist, Mitch Cotie, is a hot number in the small world of motorcycle club art and logos. That doesn’t make you rich, but it’s something.

Outlaw biker gangs played well in the theaters, starting with “The Wild Angels,” a mid- ‘60s B-movie with Peter Fonda, and going well beyond. This interest in outlaw bikers as rebels and antiheroes, some think, is what brought skull imagery into rock music and metal in particular.

Skulls are still associated with biker gangs; and it’s still cool to be a rebel.  It may be that everybody who enjoys long rides on a chopper fancies themselves a tough-minded rebel: even when their day job is in property/casualty insurancel.

So skulls still show up on a lot of motorcycle tees.  Not all, not even most; but a lot. The Ride 4 Life a motorcycle rallyt-shirt shows a chopper made of skulls and bone.  The rally may or may not be a ride for charity — there are a number of sponsors listed on the back.  But if it was, the bones give a mixed message. 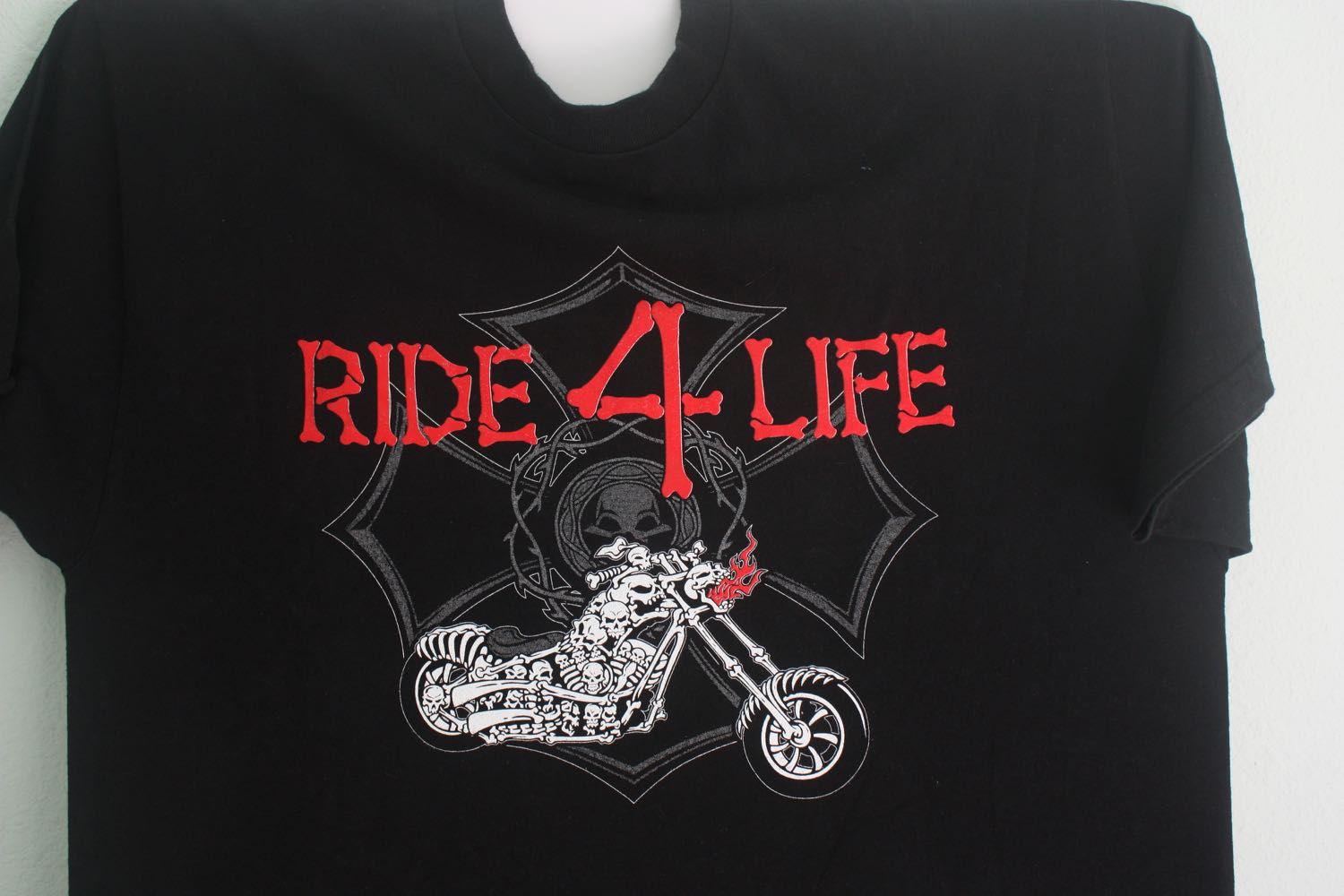 That said, this was probably not an outlaws-only rally: not with sponsorships from Honda and Kawasaki dealers listed on the back of the tee.  Most outlaw bikers still ride Harley Davidson motorcycles exclusively. Hondas? Pfui.

Even so: while most Harley Davidson dealers sell dealership t-shirts, most don’t feature skulls or violent imagery. Harleys may be the ride of choice of the Hells Angels, but remember that  a new Harley costs upward of $30K. It’s more of a middle-class purchase anymore. 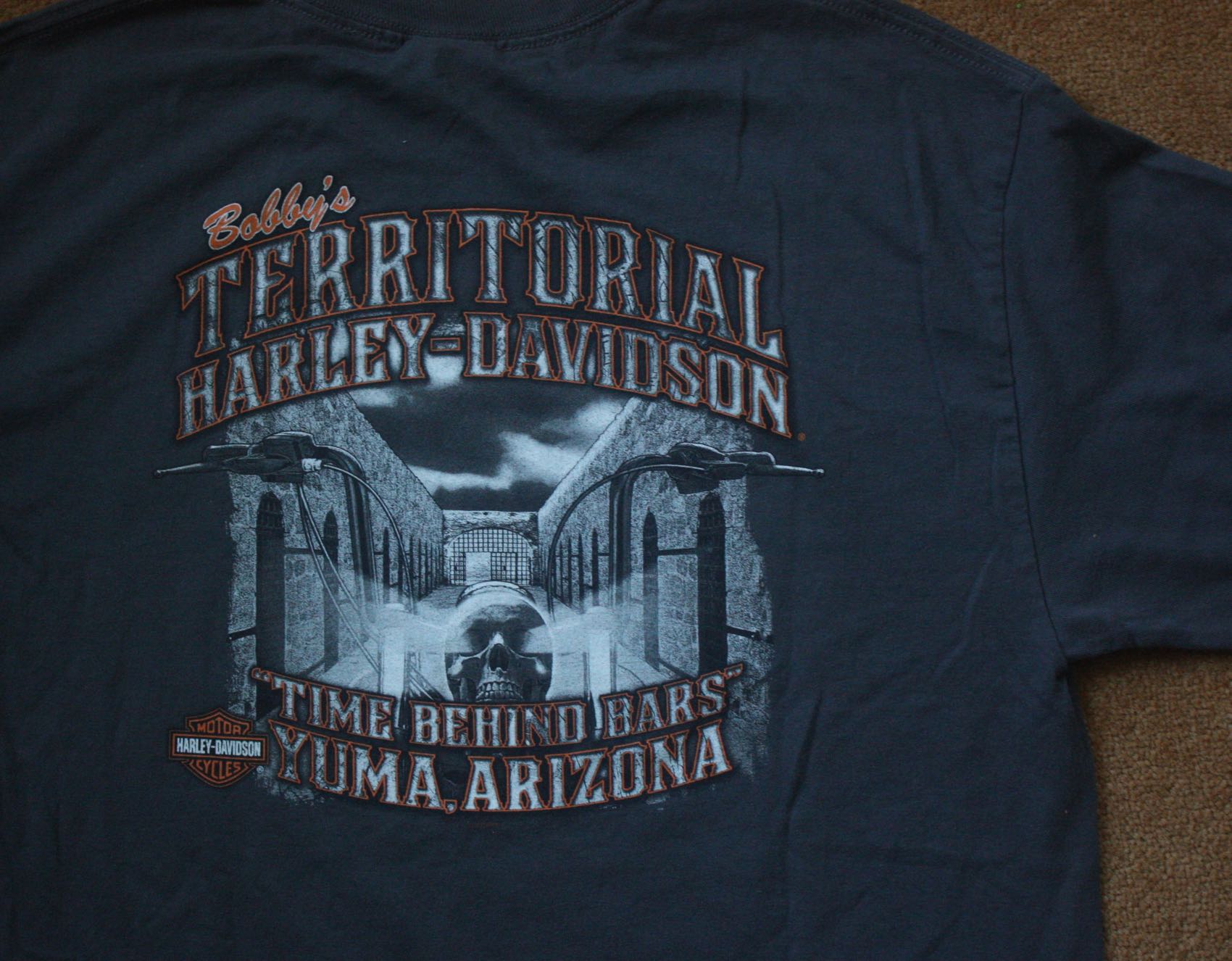 Still, Territorial Harley of Yuma, AZ, chose to go with a skull-headlight motif with Yuma’s infamous, frontier-era Territorial Prison as a backdrop.  Skulls, Arizona, Harleys, a prison full of notorious killers: I can see the temptation.

As I waited in line to pay for this tee at the thrift store, a teenaged girl rushed up to me and asked if there were any more.  Skulls sell.

Other businesses associated with Harley motorcycles use skulls more commonly.  They want to invoke the outlaw glamour when selling accessories, equipment, and so on.  The tee belows comes from a company that sells horsepower-enhancing hardware and software upgrades for your Harley. You want to go from 90 HP to 120 HP? Well, a daring stud like you deserves an outlaw t-shirt! 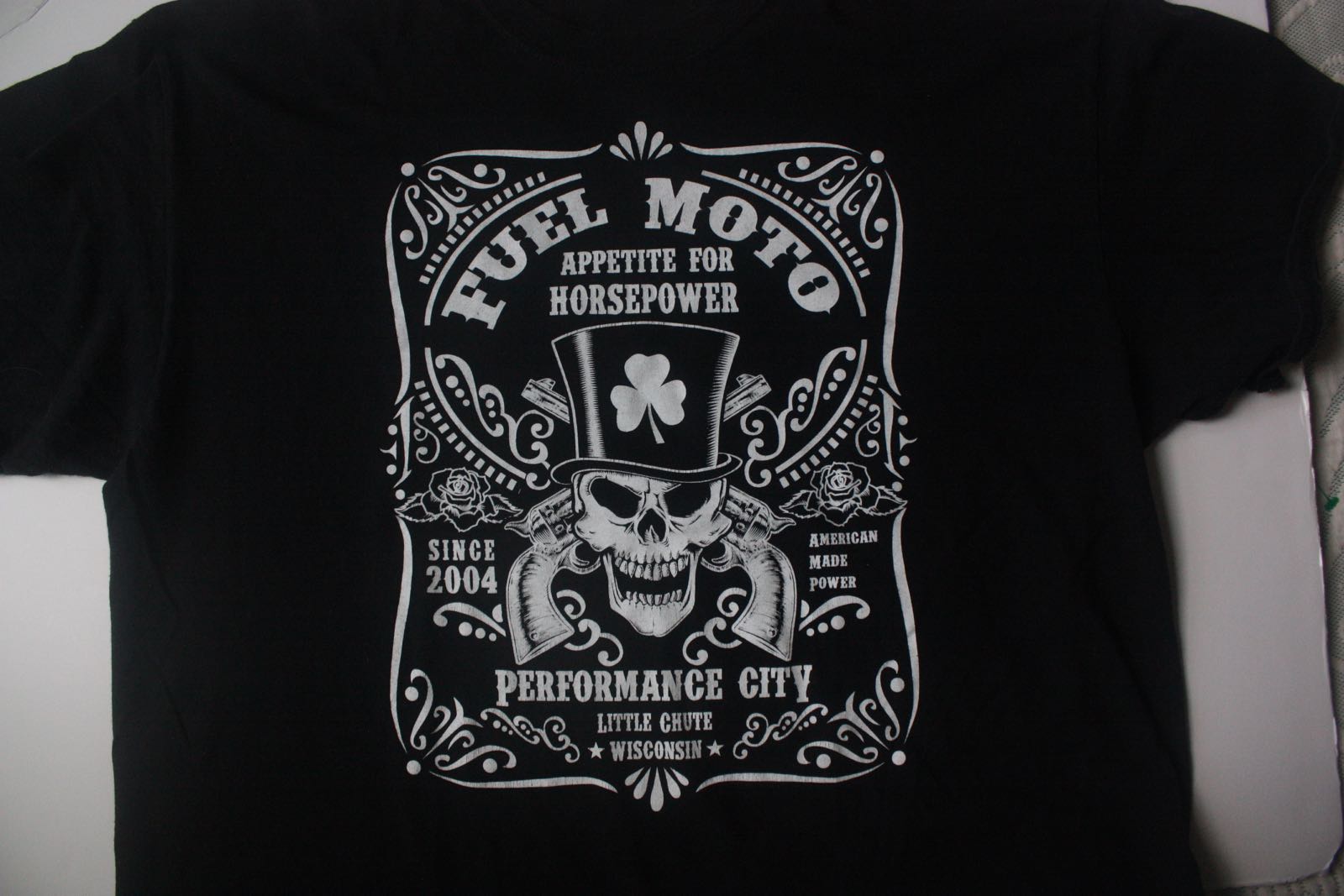 The band Guns ‘n Roses used a nearly identical image, minus the shamrock. Image searches return plenty of skull illos with some combination of hats, shamrocks, and pistols. It seems to be an Irish thing.  Fuel Moto’s owners might be ethnic Irish.  Or they could just like Guns ‘n Roses. Or both. 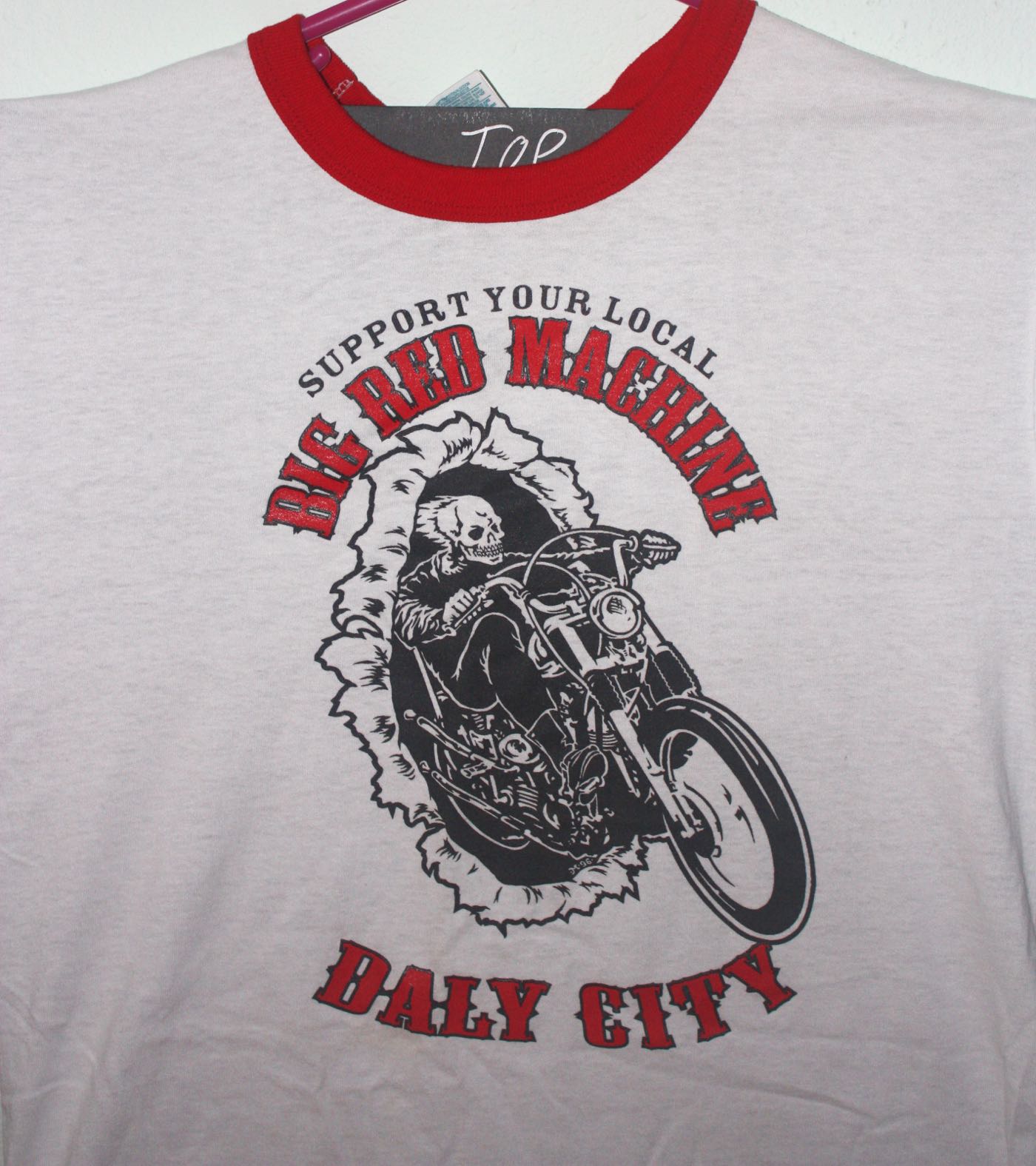 And of course there are the Hells Angels.  By their own rules, no one but an Angel can wear a piece of clothing that says “Hells Angels” on it.  I’ve never actually seen a Hells Angels tee.

Angels chapters sell BRM tees freely to the general public.  I’ve yet to see one without a skull. Because you may not be a badass Angel, but your Big Red Machine tee makes you badass enough.

Sometimes, you know, skulls don’t seem to mean anything except, hey, a skull. Made ya look. Or perhaps there’s some twisted symbolism that only Freud or Jung would dare to speculate on. I feel that way about the Skull of Cats T-shirt. 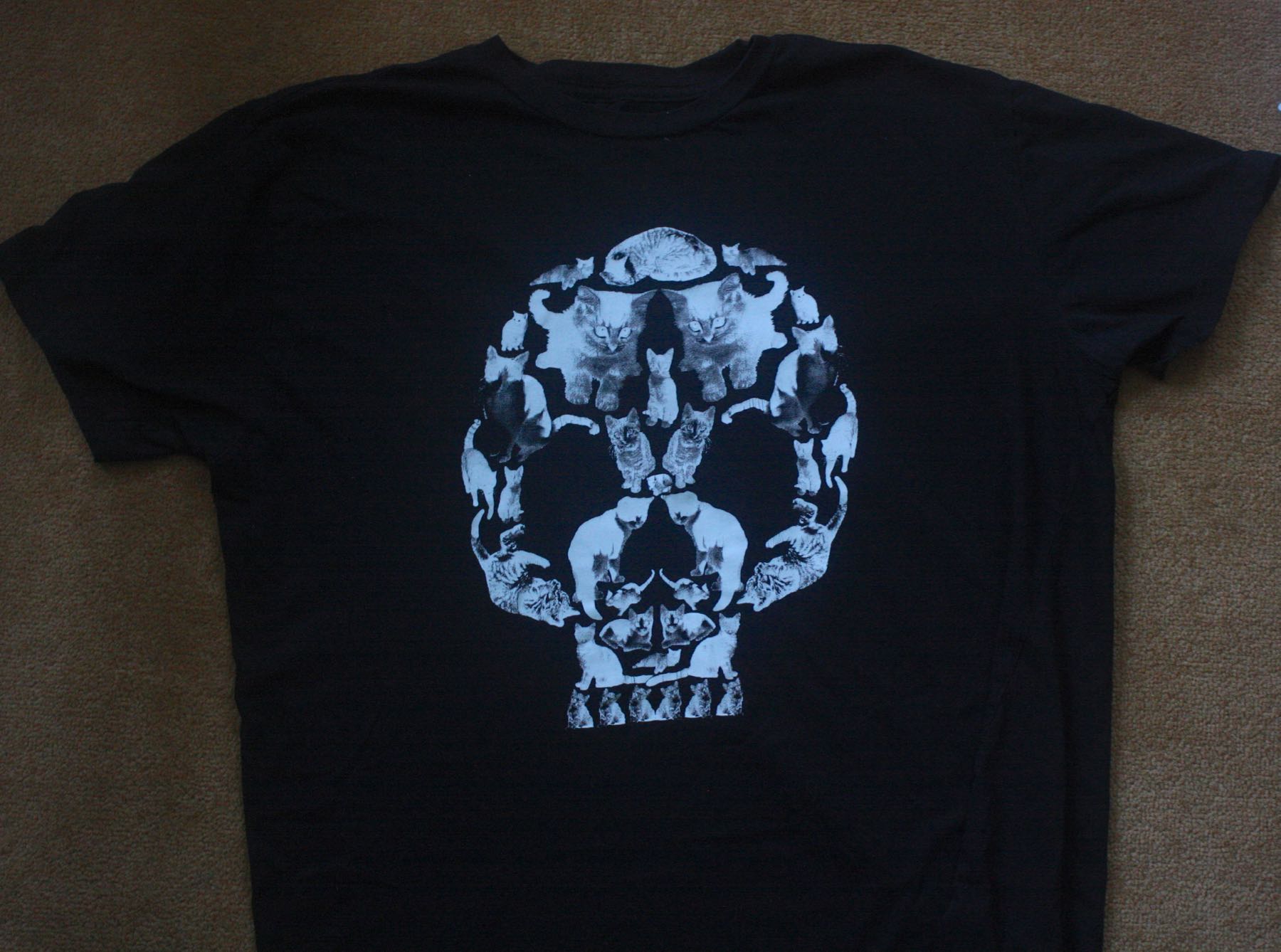 This is one of mutliple skulls-of-cats t-shirts on the market today.  They don’t look the same; they come from different vendors.  There must be demand, or there’d be only one design, with no imitators.  Out there, someone is probably snarking, “It was I and I ALONE who created the first SKULL OF CATS t-shirt!”

But what does a skull-made-of-cats really mean?  Is it ironic? Is it cute?  Does it allow young women (I assume) swing both ways at the same time?  Don’t ask me.  But once again, the tee does what a skull is supposed to: make you pay attention to the wearer.

Now, on to more skulls. And coffee: 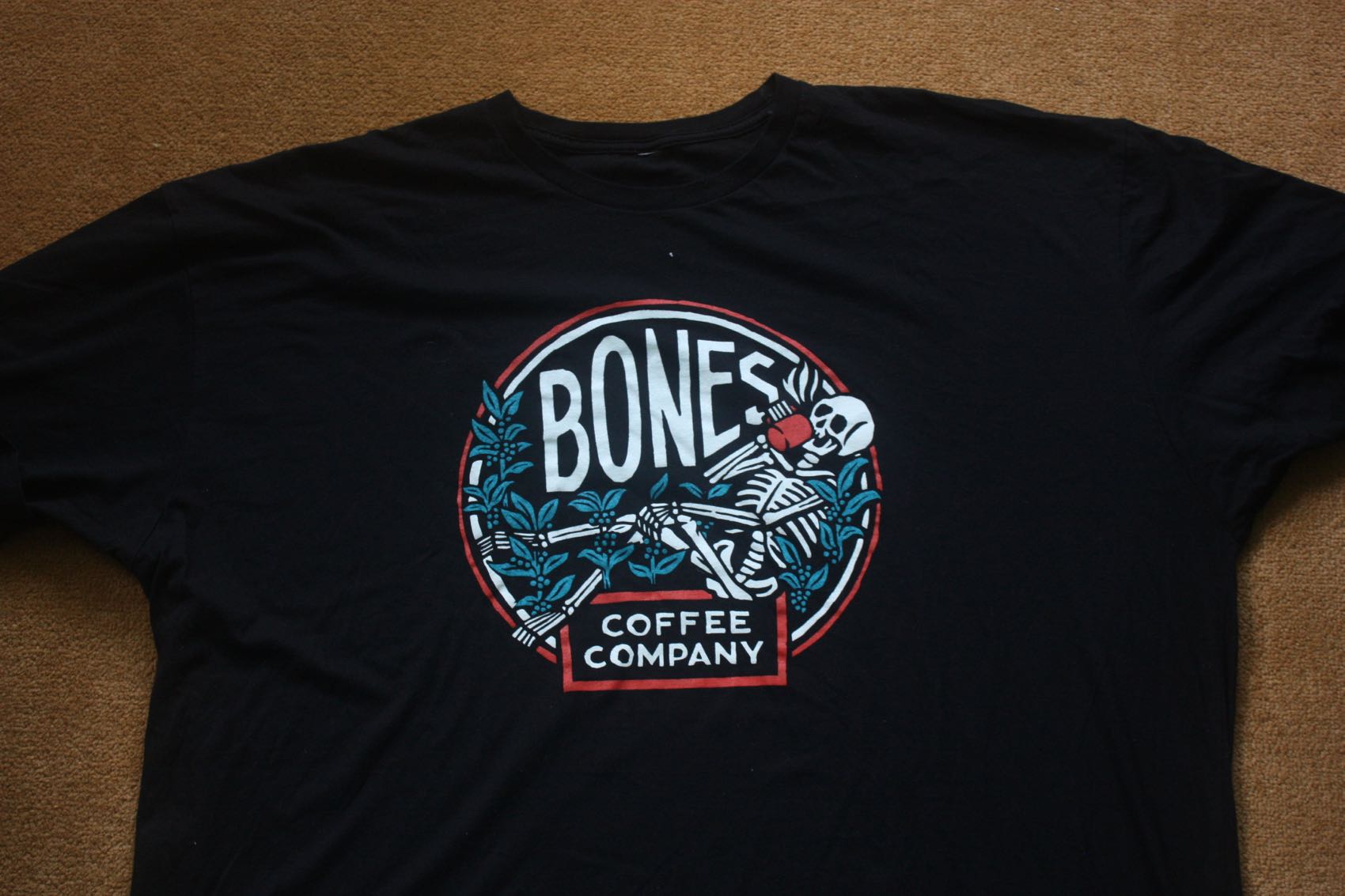 This tee from the Bones Coffee Company shows a skull reclining in foliage, luxuriously drinking coffee.  Is this the Afterlife? Does Bones Coffee send you to Heaven? As a skeleton? I’m confused. Not especially interested, but confused.

Bones Coffee is not a coffee chain; it’s a roaster that sells online and through retail outfits.  It stands out by offering coffee of weird flavors: bacon coffee, strawberry-cheesecake coffee, even peanut-butter-and-jelly-flavored coffee.

Now, I would assume that coffee consumed by a skeleton would flow out of the rib cage. Unless skeletons drink only the PB&J coffee because it sticks to their rib bones and doesn’t escape.  Reviews on the PB&J flavor are mixed, by the way: “You might like it; you might think it tastes like stomach acid.”

There’s no story here. I smell “marketing concept.”  And there’s nothing like a skull to make things edgy, though I think PB&J-flavored coffee would make my stomach edgy all on its own. 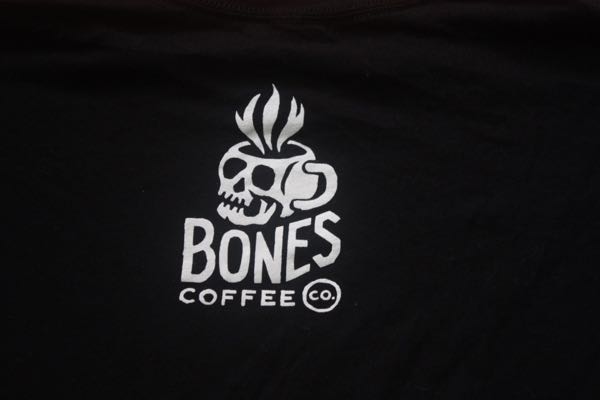 That’s it for now. There’ll have to a a Skulls Part Three.

2 thoughts on “T-Shirts from the Collection: Skulls, Part Two”