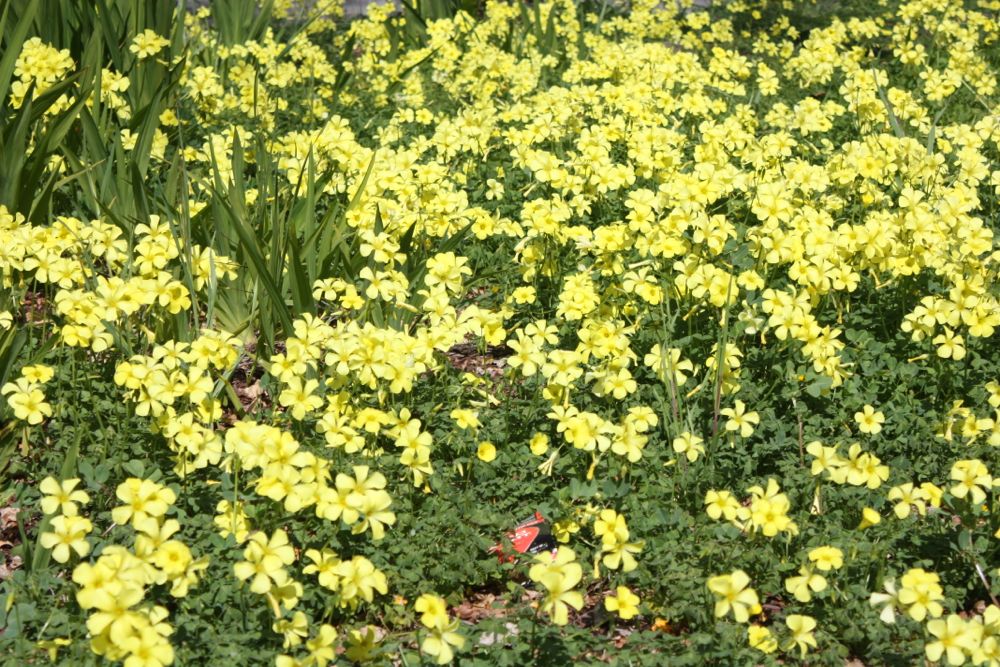 We’ve had a cold winter here in town – colder than we’re used to, at least. The thermometer had its hands full pushing above 50 degrees, and each night slunk back to the low 30s at the slightest excuse.

Yes, we’re weather wimps here. But it’s Central California; we’re not set up for cold. We were promised mild weather year-round. If winter’s going to be this grim from now on, I want a $100K refund on my house for breach of contract.

But last Friday the gods smiled on Santa Cruz. They brightened the sun, softened the air, and brought the swimsuit temperatures back for the weekend. It’s a pity to stay indoors on a day like that.

So I didn’t. I walked downtown Santa Cruz and the West Side. Away from the commercial strip, this neighborhoods are little slices of idealized Americana. Big trees, quiet streets, pleasant houses of various ages and conditions—no two of them very alike. 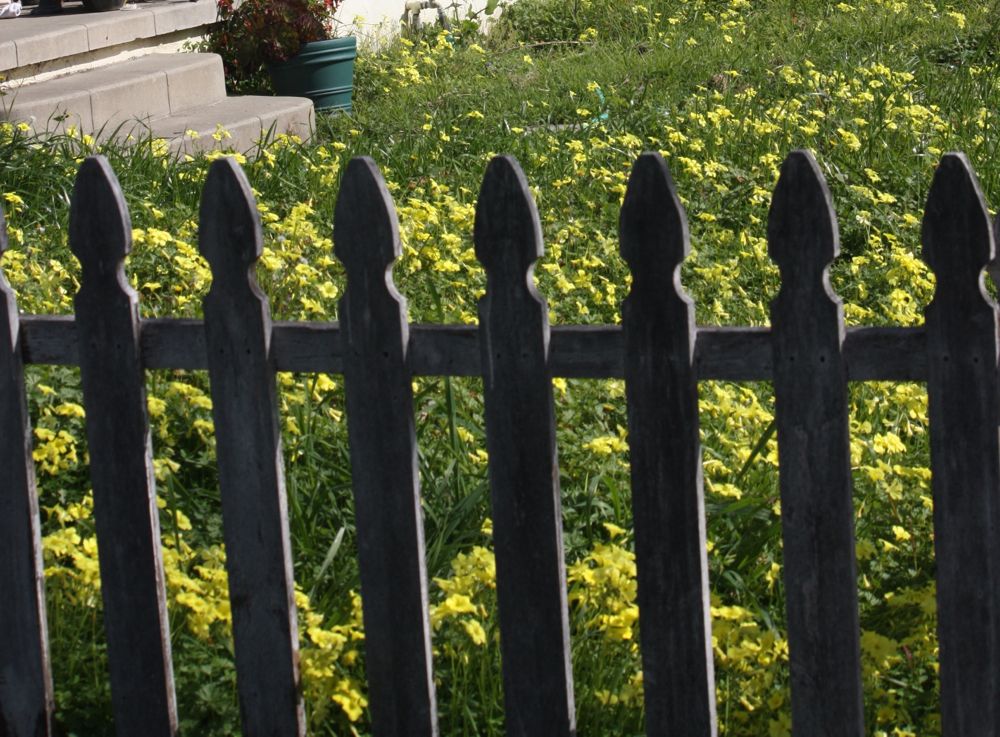 And oxalis. Lots and lots of bright yellow oxalis pes-caprae, aka Bermuda buttercup, buttercup oxalis, English weed, yellow sorrel, African wood-sorrel, sourgrass, and a dozen other names. Oxalis—what everybody calls it in these parts—is an invasive South African perennial that was brought to other countries as an ornamental plant.

If the climate is anything like South Africa’s in its new home, oxalis jumps the fence—literally—and becomes part of the local ecosystem. And as far as climate is concerned, South Africa and California are twins separated at birth.

That’s how oxalis came to be Santa Cruz’ favorite weed—or at least the most noticeable. It’s bright and pretty and everywhere, whether you like it or not. Some do like it; others, not.

Oxalis pes-caprae is an attractive, clumpy plant with dappled, clover-shaped leaves and bright yellow flowers. It’s soft to the touch, attractive, and inoffensive in every way. It blends in well with other flowers and adds a dash of color to green grass and foliage. Sometimes more than a dash. 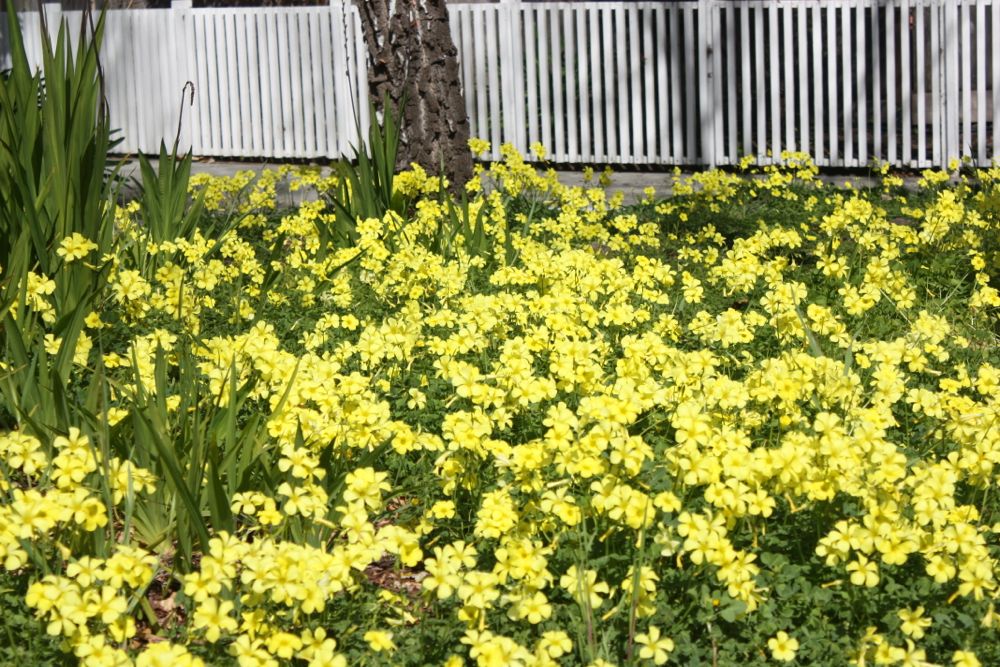 And oxalis is fragile. The whole clump attaches to the ground by a single stem, which snaps off easily. So when you’ve had enough of the oxalis—or more than enough—it’s quite easy to clear it down to ground level with your bare hands.

Gone. Done. No more. Until next year, when it comes back. Oxalis always comes back.

Sure, you can clear a whole yard of oxalis in about twenty minutes by the grab-and-snap method. And if you have chickens, they’ll eat it down the ground for you in no time. Chickens lust for oxalis in a serious fashion.

But the only way to remove oxalis permanently is to carefully dig out each plant, leaving behind none of the the too-small-to-see-clearly oxalis bulbs. Not only is that a lot more work, it’s almost impossible to get all the bulbs.

And most people kind of like oxalis; so they say, the hell with an orderly garden, and let oxalis come and visit for a few months. And the great thing about oxalis is that its beauty makes even a messy yard look like, just maybe, you meant it to look like that. 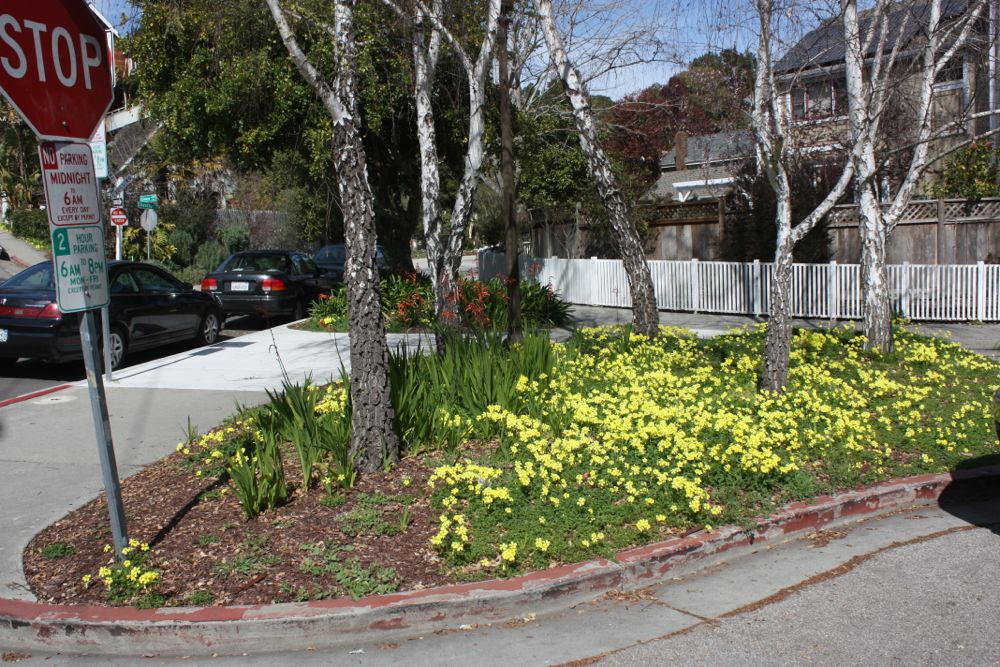 Not every Santa Cruzan welcomes oxalis’ disorderly presence. These are people who like their garden “just so” and don’t want unwanted visitors disrupting their carefully arranged botanical effect. They tend to have gardens that disdain spontaneity.

I knew a guy who hated oxalis so much that he carefully dug each oxalis plant out of his backyard as soon as it came up. It took years but he finally had an oxalis-free backyard. He was incredibly proud.

And it wasn’t even really his backyard; he was a renter. But he was into having a controlled, “perfect” garden, and people who are into control tend to hate our gorgeous gatecrasher. Oxalis is about the beauty that can come from letting go of control.

Oxalis is also a promise of renewal. It blossoms in the winter, when most flowering plants are dormant even here in Paradise. At the Trescony Park community gardens, for example, most of the gardeners let their plots go fallow for the winter. And so oxalis steps in to fill the empty gardens and reminds us what spring will be like when the other flowers bloom.

Oxalis fills the neglected spaces of old Santa Cruz; the abandoned side yards, the anonymous strips of ground between fence and sidewalk or sidewalk and street. These spaces should be drab and mundane, but oxalis makes them beautiful. 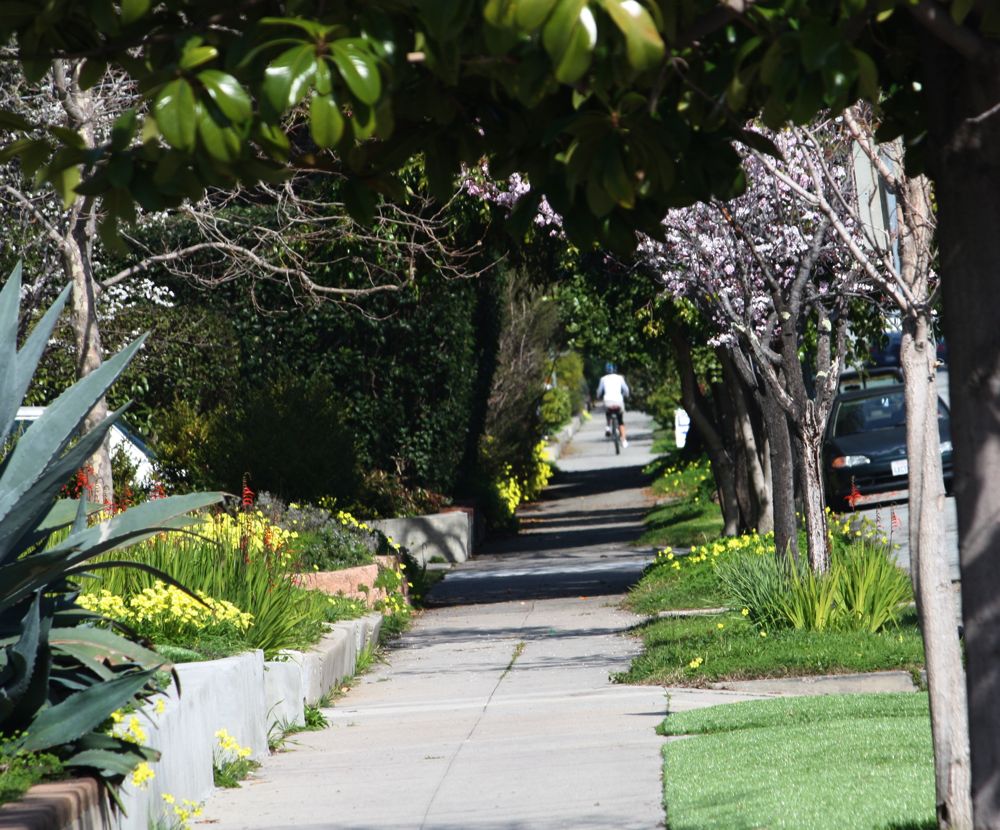 What do we have to learn from oxalis? There’s a Buddhist teaching story in here somewhere. We get our share of weeds here in Santa Cruz, and many of them we homeowners must battle like invading armies. Blackberry, thistle, stinging nettle: they’ll take over your yard just like oxalis, but they’ll do it with spikes, thorns, and toxins. You’ve got to kill them, because if they take control you might never get it back.

But oxalis is no threat; we know we can get rid of it any time we want to—for a while, at least. And it’s pretty. So mostly the oxalis stays: an uninvited guest, true, but one who only takes what isn’t wanted and always offers presents in return. 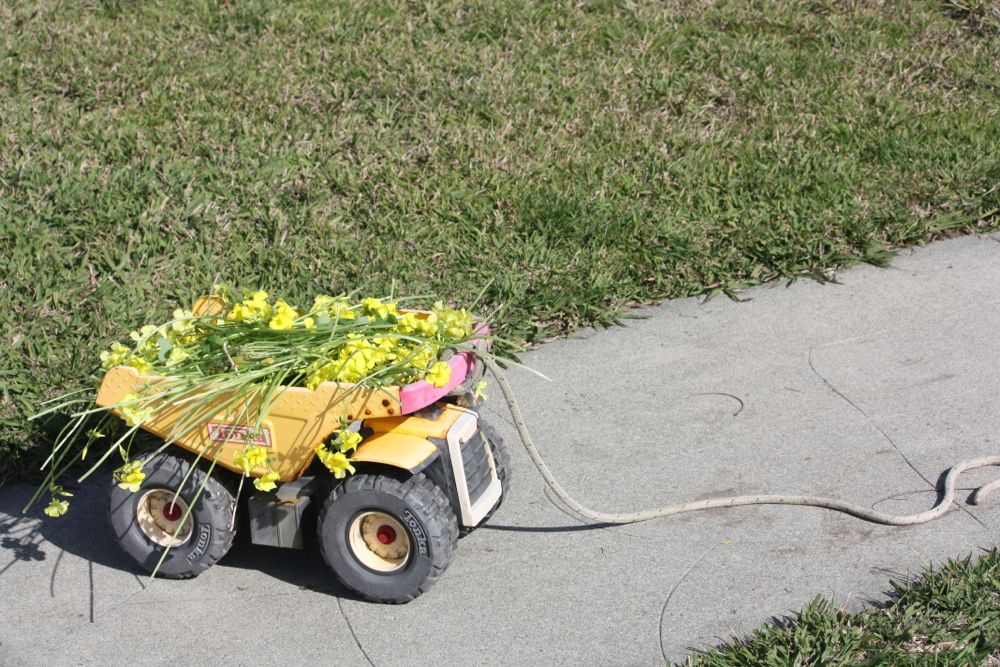