Some time back my wife and I went down to the locally-owned supermarket in our locally-purchased car. We bought locally-baked bread and locally-grown broccoli. We even bought locally- (okay, regionally) produced ice cream. And finally, locally-produced eggs.

The egg department proved to be a bit – embarrassing. 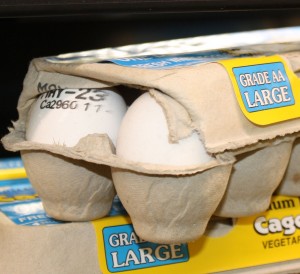 Somewhere in the bowels of the packing line at the local egg farm, a rogue machine had ripped the end off a carton of one dozen Grade AA large white eggs. The carton continued on course down the line where a machine sprayed an sell-by date – not on the cardboard carton, but directly on one of the exposed eggs.

The carton proceeded routinely into a cardboard box, onto a truck and to the locally-owned supermarket, where an employee put it in the egg cooler without looking at it.

I had to have a picture. As you have seen.

And a copy of the pic was sent in an email to the egg farm itself. I thought they should know; perhaps improve their process. You know.

I’ve yet to hear back. It’s been, oh, a year now. I’ve complained about a couple of other things as well.  Nada.

I do believe in “buying local.” It’s a big deal in Santa Cruz, where good jobs are not so common for the common folks. This particular outfit makes good eggs – no question. But if you don’t check the carton for broken ones, you’re a damned fool.

I need a reality check here, people: is it normal to expect a broken egg – or two – in every other carton of eggs? I had a life before I came here to Santa Cruz County, and I don’t remember throwing out nearly as many eggs back in San Francisco, or San Jose, or Petropolis, or any damned place as I do here. Locally Owned Egg Farm Inc. has turned me into an assiduous eggshell checker.

I once asked a supermarket stocker what was up with all the broken eggs, and he allowed that the Locally Owned Egg Farm truck could stand to be, oh, just a tiny bit gentler with the eggs when they made delivery. I had visions of a lumper standing on the tailgate of a speeding egg truck, hoisting a crate of Grade AA Large overhead and screaming “CATCH!”

Supporting local business is good. But there’s a difference between “support” and “enabling.”

Like most people, my wife Rhumba and I have thousands of digital snaps that we’ve never printed.  But she finally decided to print a few to put on the wall, and chose a home-town online photo-print service out of loyalty.  But it required her to download an app to her computer.  And then the app didn’t work.  The company’s customer support rep offered to walk her through it, but Rhumba didn’t see why she should have to install the company’s app just to have two or three pictures printed.  The rep said she would bring those ideas to management.

Should I be loyal to local car dealers? When I have yet to find a particularly honest one?   Or to locally-owned retail stores that don’t have what I want – and don’t much care.  There are plenty of good ones, but plenty of the other kind, too.

In my fantasy world, if we want to get serious about this “shop local” thing, bad local businesses should be shamed. Their owners should be snubbed at the surf breaks and not allowed their spot in the rotation. The Chamber of Commerce should eject them from meetings but keep their dues money. Baristas would never make their lattes quite hot enough. Small groups of poorly-paid Latino service workers would follow them around and shout condemnations at them in the Spanish that most of them never bother to learn. Charities would return their donations.

Yeah. That would be nice. Or, you could just not buy their stuff. Change the slogan from “Buy Local” to “Buy Local, But Don’t Be a Tool.” It might be a hard sell down at the Chamber of Commerce. But it’s worth a try.

Addendum, 3/17/2013: One of my favorite local businesses is calling it quits. Farmer’s Exchange, purveyors of quality furniture and home furnishings for many years, is no more.  No tragedy here, no business reversals: just older age, and furniture that seems to get heavier by the year.