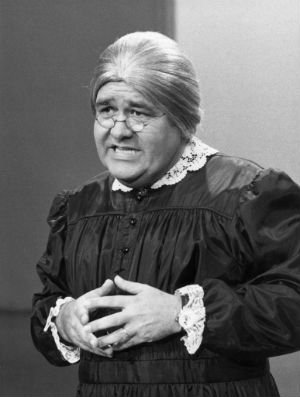 Even though she inhabited the body of a comedian named Jonathan Winters.

Winters passed away last Friday at 89: a guy who was more comfortable at being someone else than he ever was at being himself.

Luckily, he had lots of other selves to be; Winters was a crowd on two feet, an inexhaustible cast of crazy characters. And he could improvise endlessly.

But it’s Maude Frickert that I remember: an old woman in a bulky black dress with wire-frame glasses and a cap of silver hair – and the sharpest tongue on the planet. Winters as Maude was outrageous, shameless, and bluntly honest: all the things that proper older women aren’t supposed to be.

Only, they are. A lot of them, anyway. You aren’t supposed to know that. It contravenes the cultural script.

I learned the truth at my grandmother’s knee. Gramma was large, elderly, and Portuguese, with an accent as thick and rich as linguica sausage. She liked to tell me elderly Portuguese jokes. Because I was young and her accent was so thick, it took awhile to figure out that Gramma’s old jokes were off-color.  Wandering sailors, snooty priests, foul-mouthed parrots, not-so-innocent women: this was Gramma’s cast of characters.

“What were you talking to Gramma about?” Mom would ask my seven-year-old self.

“She told me a joke about the priest, the widow, and the sailor’s parrot.”

“She told you THAT one?” Mom would hiss in dismay. But she never had “a word” with Gramma. No one did. It was no use. Gramma had got through a tough life by being a live wire, a character who knew what she wanted and didn’t care what other people thought.

Back when I was a teenager Uncle Caesar, 65 if he was a day, ran off to get married without telling anyone. He’d just buried his second wife – he buried the first one, too – and the guy couldn’t stand being single. Six in the morning, inn the dawn following the wedding night, the phone rings.

“So what’s this about you getting married?” It was an old woman.

“Nosy Rosy!” It was Gramma, of course. Her network of spies had just gotten the word to her – I’m not sure she ever slept – and she didn’t care what time of day it was or who he was in bed with. By Uncle Caesar’s report, she gave him an earful.

Some of my aunts were practically Gramma’s clone: Aunt Lupe, for example. As a girl she’d been pushed into a bad marriage by Gramma; she got out of that and decided, later on, that it was more fun to live in sin and drink beer – especially other people’s beer.

And Aunt Amelia. She and Gramma fought like cats in a sack, because both of them wanted their own way and neither would ever yield.

After Gramma died, Aunt Amelia let her hair go gray and restyled it, so that she looked – just like Gramma. She acted like her, too, as she always had: did what she wanted, said what she felt like, and never looked back. Aunt Amelia was actually very easy to get along with: you could say absolutely anything to her, because she never listened.

After church service last week I charged to the men’s room – they’d baptized somebody’s spawn, and it took a while. As I zipped up at the urinal, after, a prim old woman strode into the men’s room. “My, isn’t church busy today,” she remarked, smiling, as if discussing the weather. She didn’t break step for a moment – just moved confidently into the toilet stall and shut the door.

Wow. Bold old women are alive and well. Maude Frickert could not have excelled her. I could tell you other stories, but that’s for another time.

There was once a very wise women who kept her eyes wide open all her life, and wrote very interesting novels about people and the things that they do – to themselves, and to others. From her work a couple of quotes stay with me: “Pain is the great teacher of mankind. Under its breath, human souls grow.” And she also said, “Old age transfigures – or petrifies.”

One thing that I can say about the bold, old women in my life is that they’ve all been through the mill, one way or another. And they survived, and figured out who they were, and accepted it. Even Jonathan Winters based the Maude Frickert character on his Aunt Lou, a large woman with lifelong physical handicaps – and a lightning wit, and a taste for apple brandy. And it seemed to me that as they got older these women seasoned liked old wood, knots and blemishes and all.

As a not-terribly-assertive man in late middle age, I still do ask myself sometimes what I’m going to be when I grow up. I can aspire to nothing better, I think, than to accept myself as I am and stop making excuses for not being what others want me to be. And just move forward from there. The bold, old ladies show the path forward. As did Jonathan Winters, the guy who became himself by becoming others. Rest in peace, sir. And Maude with you.