“Excuse me, can you take my picture?” I offered the camera to the rotund hardware store clerk. He did not take it;. He said nothing.

“I need a picture of myself standing next to this pressure washer,” I continued. “I’m writing a book of poetry about true crime, and I need illustrations. It turns out that people steal a lot of pressure washers.” 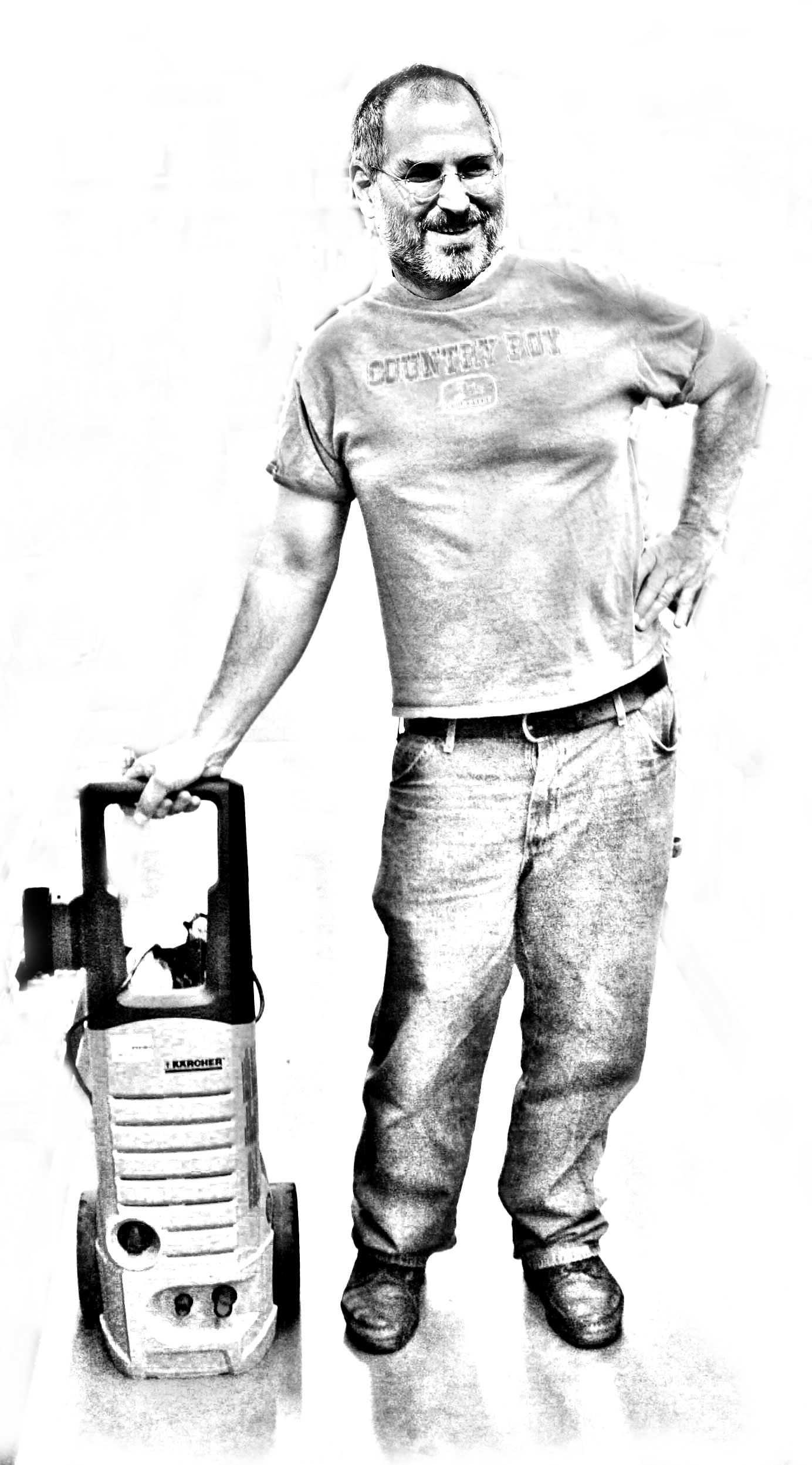 His expression shifted: from suspicion to confusion. But I kept talking, and eventually he snapped a few pics of me standing in the paint s and finishes section next to a bright yellow pressure washer. That night, in a photo editing program, I would swap out my head for the face of Steve Jobs.

And it’s true about the pressure washers. They regularly flee from unlocked cars and trucks, along with laptops, iPhones, loaded pistols, sunglasses, and money. Somebody, I suppose always needs a clean wall at a low, low price.

One photo down, dozens to go.

As my regular readers know — if I have any left after this hiatus — I’m putting together a book called Police Blotter Haiku — seventeen syllable haiku based on crime stories from newspapers around the nation. I got crowdsource funding for it through Kickstarter. All was going well; all I needed was some photos. I obtained a number of them, laid out the book — and it looked like a telephone book with tiny little display ads here and there. Boring.

So I went from having most of the photos I needed, to being short by 100 photos. And I had a tight deadline for delivering the book to my Kickstarter backer. Which I am not going to meet. 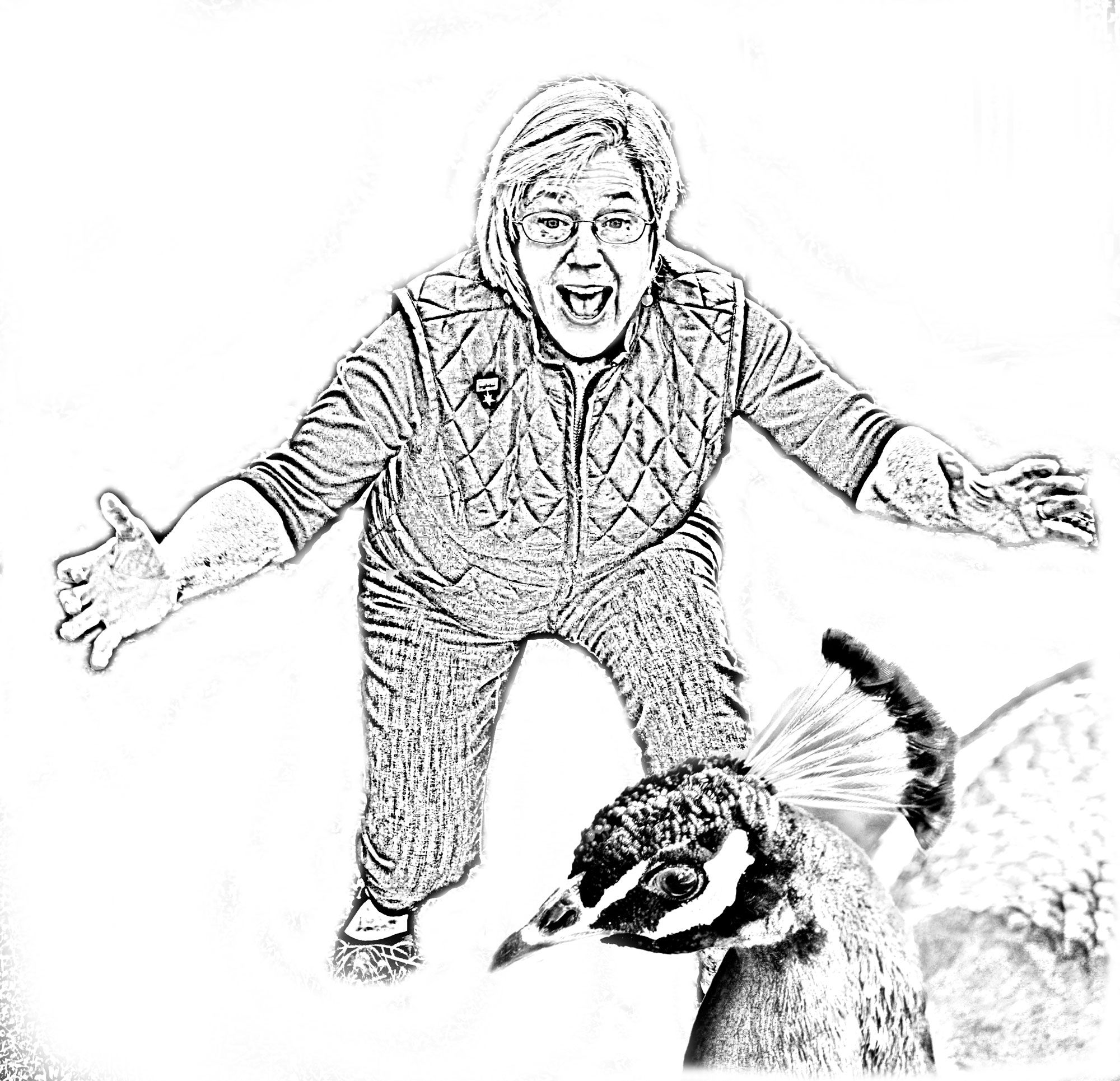 So I’ve been out getting more photos over the past month, from whoever I can get to stand still. I  have persuaded individuals to chase invisible peacocks (which were edited in later).

I mocked up collision scenes between a pickup truck and recycling containers; made an innocent network engineer to stand in for a dangerous gunman; wandered the streets with a phony bomb, looking for just the right public-looking building to place it in front of — just for photography okay?

I have even photographed hallucinations. 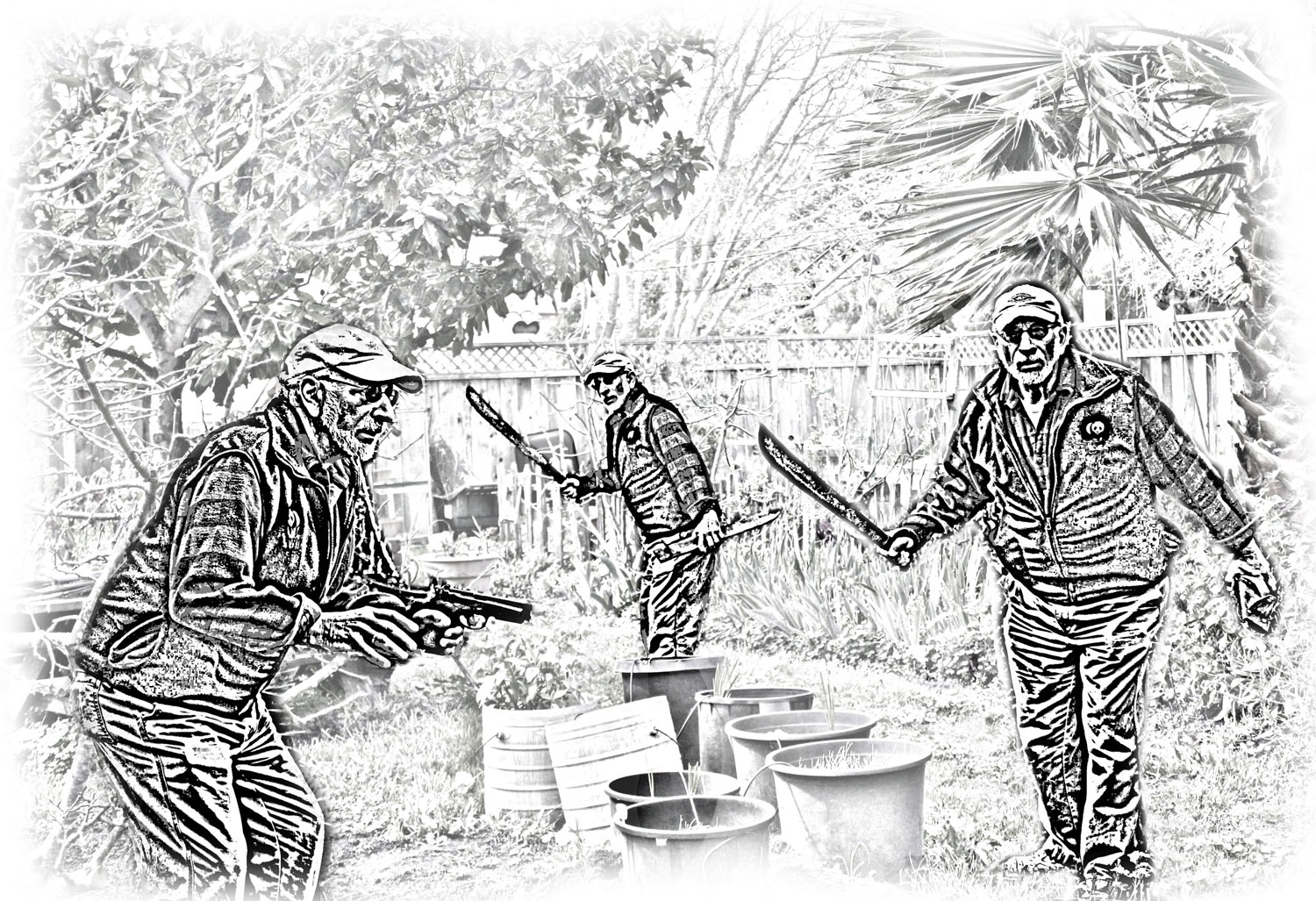 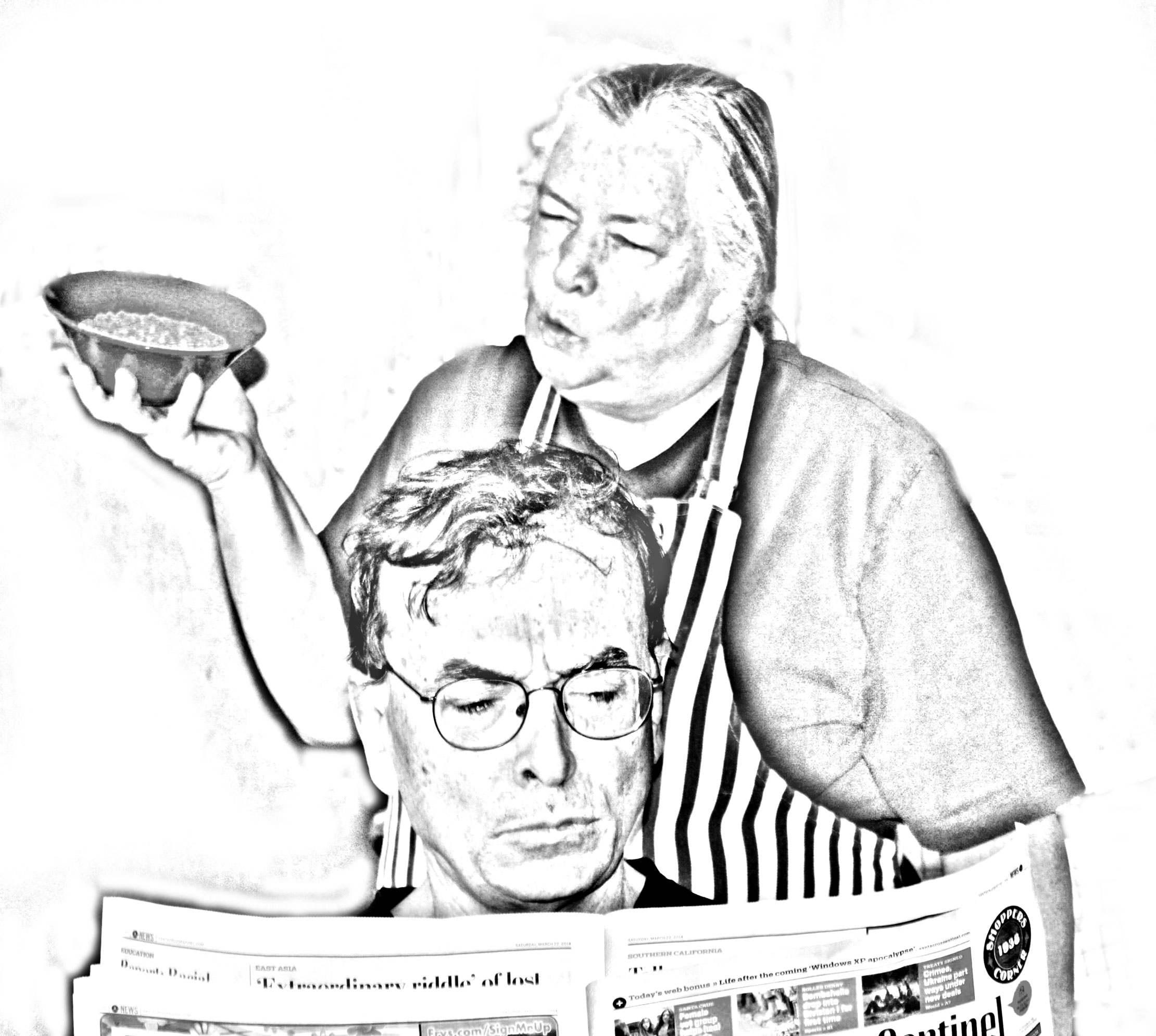 I have made chickens to smoke cigarettes — or appear to. And plopped down on my back in the middle of the street to get just the right shot of a pine tree. I have made men and women to mourn a non-existent dead chihuahua. I have posed as an insufferable husband, about to get his comeuppance from an angry wife with a cup of hot stew.  And no, that’s not my wife Rhumba.

I have done jumping jacks, facing away from the camera, in nothing but work boots and a watch cap. I have  organized office-chair races. 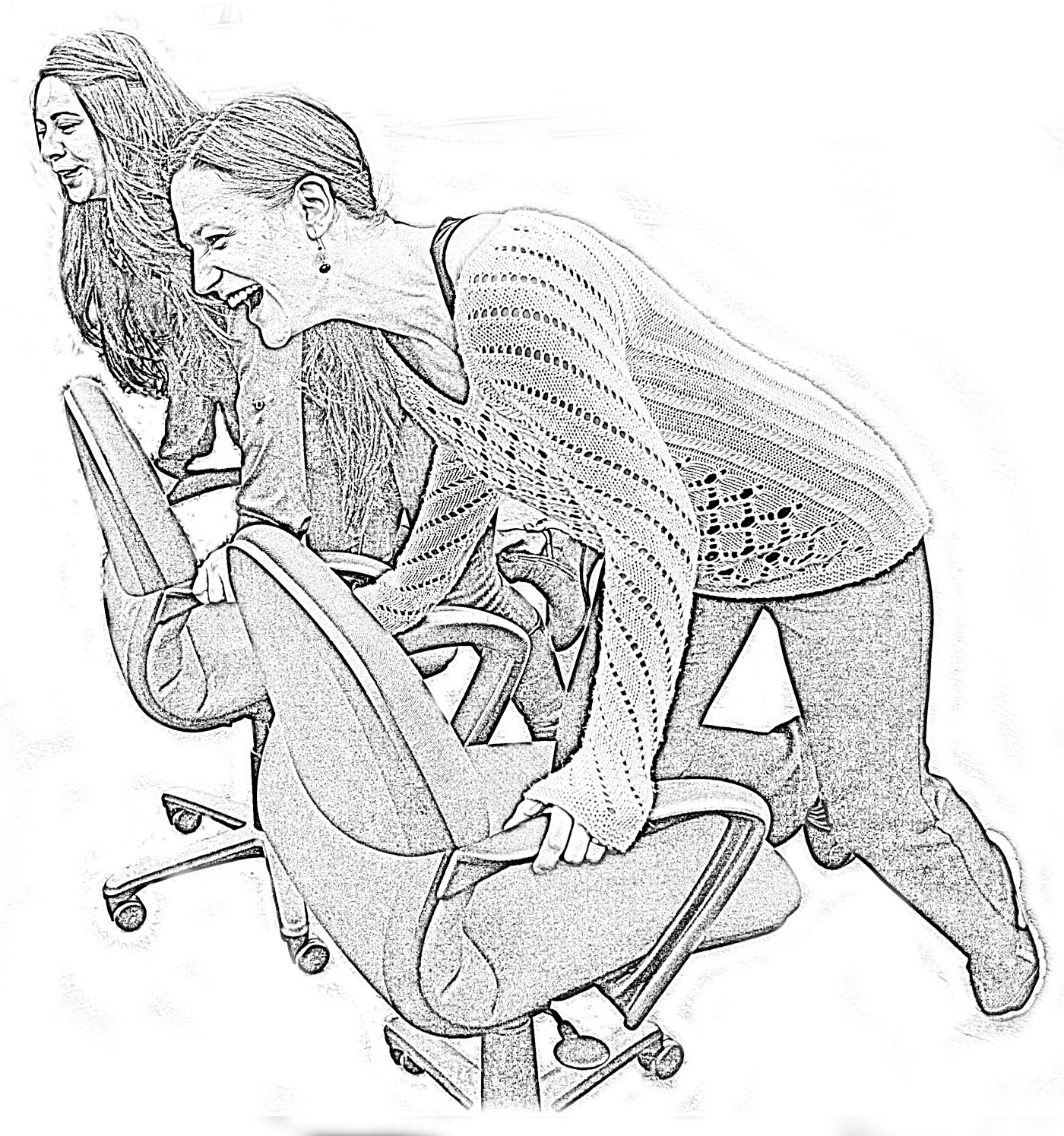 And most every night I process the photos into something like line drawings, and work on the book layout.

Meanwhile, the wild geraniums grow pine tree-tall in the front yard; the beds of ivy are making a break for the sidewalk; the taxes remain undone. Low-grade anxiety is my constant companion. I hate not keeping a promise. My inner five-year-old is sure that such iniquity goes on my Permanent Record.

All I ever wanted to do was write. Project management is not my forte. I’m too busy for all this. Sometimes there’s so much to do that I coast to a stop for a few days; a very human response, and also extremely counter-productive.

My real problem: everyone else is as busy as I am. I’ve got a guardian angel in the Arts Department up at UCSC, but she’s hard pressed to find any likely taken for me. “I’ve contacted some amateur drama clubs,” she wrote me. “But they couldn’t find a time when they could all meet. She put me in touch with a group of student Rotarians who seemed willing — but the only time and place they could commit to was on campus on Easter Day, April 20 — which is coincidentally the day of “420,” the campus’ giant traditional unauthorized marijuana festival. Which the young Rotarians emphatically refused to take part in, unlike most of the rest of the student body. This explained the free time in their schedules.

I couldn’t see myself pushing through throngs of befuddled dopers to meet with a a small group of straight-laced young men and women who I would try to coax into acting like, well, befuddled dopers. And paying for the privilege. Yes, I’m rather desperate for photos. But I gave it a pass.

Everybody’s busy. Way too busy. Rhumba and I are too busy with our own projects to cook, so we eat out too much; inexpensively, but nevertheless. The waitress who served us the other night just got her first day off in several weeks; besides her job, she runs a housecleaning business. Another waitress leads fitness classes as a second job; she’s sore much of the time. And keeps losing weight. I know skinny’s supposed to be good — but not always.

On Palm Sunday, I went to church to run the media projector and display hymn lyrics on the big screen so the parishioners could sing along about the glory of God without glueing their eyes into a hymnbook. Rhumba couldn’t be with me, because she had a class. On Sunday.

As I got things into shape before the service, three church ladies sat nearby and mourned the lack of snacks for coffee hour; nobody had signed up. “Oh well, people won’t really want to stay around after service,” one finally said, putting the best face on things. “They’ll want to rush home for lunch.”

Attendance was light. The congregation’s getting older; but it also faces competition from kids’ sports: soccer practice and the like. Soccer has taken over Sunday morning; used to be that youth athletics could take place on weekday evenings, but everyone’s too scheduled. And the parents don’t get home from the 40-mile commutes in time. So increasingly, soccer practice moves to Sunday morning. And the kids are there, and the parents have to volunteer as well if they want their kids to play. It’s more a day of soccer than a day of rest.

Up on the UC campus, week before last, the graduate students held a two-day strike and attempted to block the entrances. This has been allowed before, for other unions. But this time the administration brought in extra police to keep one gate open — by force, if necessary. They’d never done that.

The grad students teach a lot of classes; they’re getting more students to supervise, more classes to cover, less time to do their own work, and no extra money. Only work is in generous supply; and the overflow is being loaded on whoever can’t complain. The students did complain; some were apparently told that if they struck, their adviser would turn his back on them and their academic careers would be over. If you’ve known enough academics, it’s believable.

But they struck anyway. Rhumba works on campus, and I drove her up there that morning through the west gate. Crowds of skinny grad students held signs and swirled around the entrance, which was held open by a platoon of towering men in black uniforms, helmets, armor, and military gear. University staff videotaped the demonstrations. In the face of this the grad students — looked like kids. Not monsters. Not violent. Not greedy. Just wanting the time to get the good education they were promised, and were paying for. Which their professor/employers don’t leave them enough time for.

Kind of puts my book anxieties into perspective, doesn’t it?

As does the Hindu god Kevin, who continues to orbit through my life at regular intervals. He’s an old co-worker, a seventy-year-old (or near) original hippie who never stopped walking the walk. His long white hair and giant beard have merged into a single godlike mass which surrounds his eyes and nose like the corona of a sun.

When last we met Kevin, he had been pulled out of happy, low-rent retirement in India by a supoena from the local district attorney as witness to a crime he almost saw 25 years ago on Pacific Avenue. After speaking to Kevin briefly, the DA released him and left him to his own devices. And no aid in getting back to India.

Kevin hasn’t yet made it back. A couple of weeks back I found him sitting behind a cup of tea in a courtyard cafe on the West Side. He had no money but a place to stay of some unspecified sort; I didn’t ask what. Without money Kevin could not return to India. He was open to earning money, when the chance came along. In the meantime, he was happy to sit in the sun.

“So you’re waiting to earn money so you can go back to India?” I asked.

“I’m not even owning it that much,” he replied. “I will earn money. And when I’ve earned it I’ll return to India.” He stretched in his seat. “Till then — I’m here.”

Kevin is the wealthiest man I know. He doesn’t need much, or want much. Many things he enjoys, but he doesn’t need things to be “just so” to be happy. Most billionaires can’t say that. Nor can I.

But I could never give up as much as Kevin has. He is a free agent and happy in it. But some chains are precious; I think such thoughts at night as Rhumba and I fall asleep in each other’s arms.

Anyway, the book project goes on. If you’d like to be in it, and can get someone to snap a picture, let me know. I need photos of a man with shaved head (or nearly). If you are a policeman, or can look like one, or know someone who can, talk to me. The police department isn’t returning my calls. I you have an extremely small child you wouldn’t mind posing in a shopping bag, talk to me. And if you’re none of the above, and willing, I’ll find something. Operators are standing by.

I’ll be out on Pacific Avenue this weekend with camera and shot list and a pocket full of small bills, and we’ll just see if anything comes of it. This kind of venturesome behavior doesn’t come easy to me; but how lovely when it works out. I’ll never forget office-chair racing in the office parking lot. Good thing that our receptionist skates in the Roller Derby.