I keep going to Amazon.com to look at reviews for video-camera sunglasses. You put them on, turn them on, and then they see what you see. But nobody sees the camera.

This may seem creepy to you, but I imagine myself wearing video glasses every time I walk down Pacific Avenue here in Santa Cruz. Pacific is the heart of the downtown, and its sidewalks never lack for traffic. Some days the scene becomes so varied that it cries for a video record; one made secretly, so that no one reacts.

I may never buy the spy glasses – not when a good pair costs $300. But I often pack a camera; and following are a few random pictures of Pacific that I’ve taken lately. 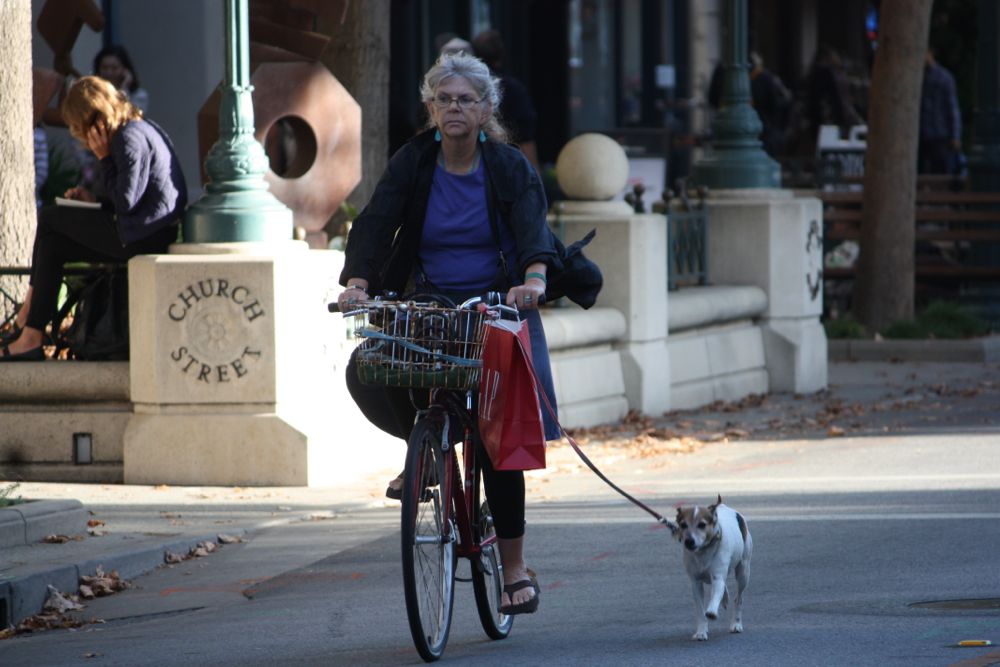 This week on a slow Tuesday afternoon — I’ve a few days off — I took a casual stroll down Pacific for the exercise. In the space of a couple of blocks I ran into a free-form jazz jam; a college class listening to a lecture on trees; giggling teen-agers slurping ice cream, and a sun-blackened woman with all the misery of the world in her eyes.

An anxious, long-haired man implores me to sign a petition to place a certain proposition on the ballot. The proposition is not what he claims it is. But if he explained it clearly, few would sign. And he is paid by the signature, and seems in need of a good meal. 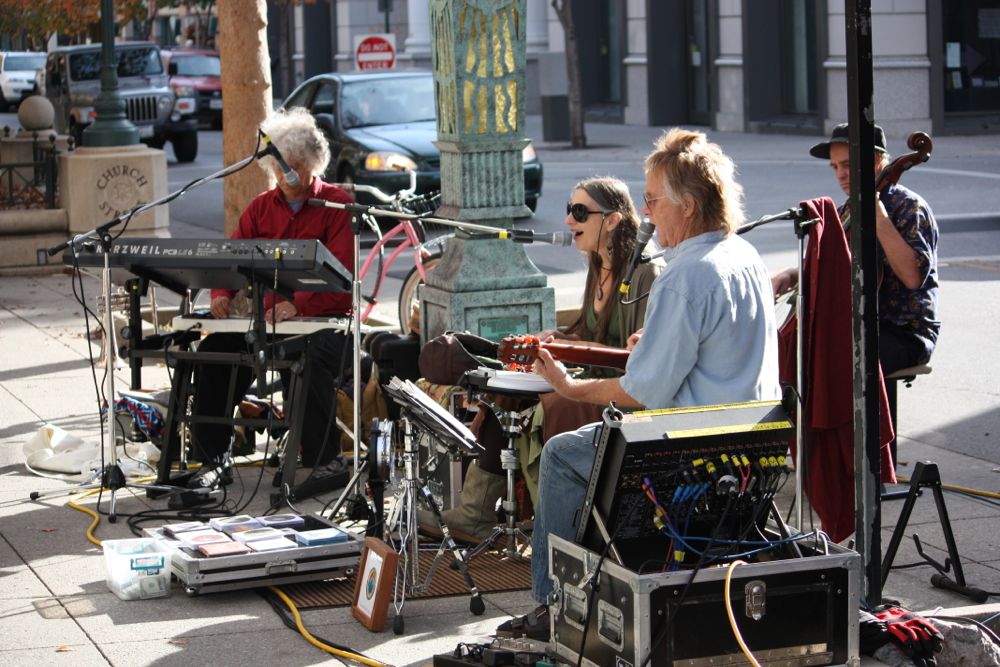 A steel guitarist picks out a twangy tune from behind a large banana leaf on which he’s scrawled “Bless God, Bless the World.” A trio of traveling musicians, back-packs and all, sets up to play some serious folk-music. Because though crowds won’t appear on Pacific until the Thanksgiving weekend, you just never know. And a dollar or two would be welcome. 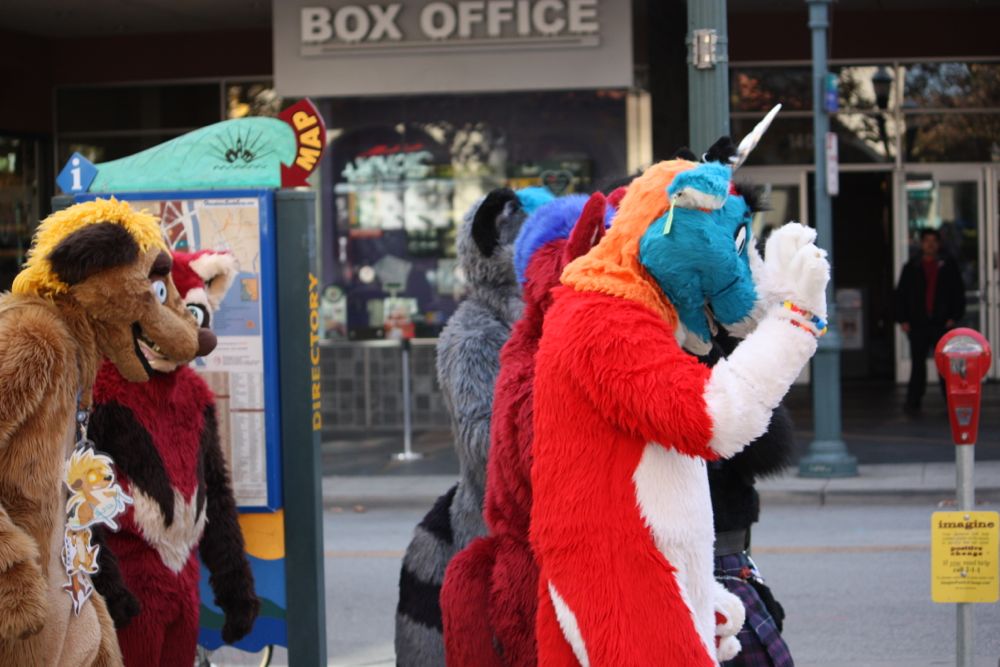 And at the natural foods market a block further on, Miss Evangeline the elderly cashier sells me a snack. She asks me how I am; fine, I answer, and her? “Wonderful,” she says with feeling. She always says that, and she always means it. Though she has the lined face of one who has seen the elephant, perhaps several times.

And if Miss Evangeline can be wonderful after several hours behind a smoking-hot cash register, what in the world are my problems worth? 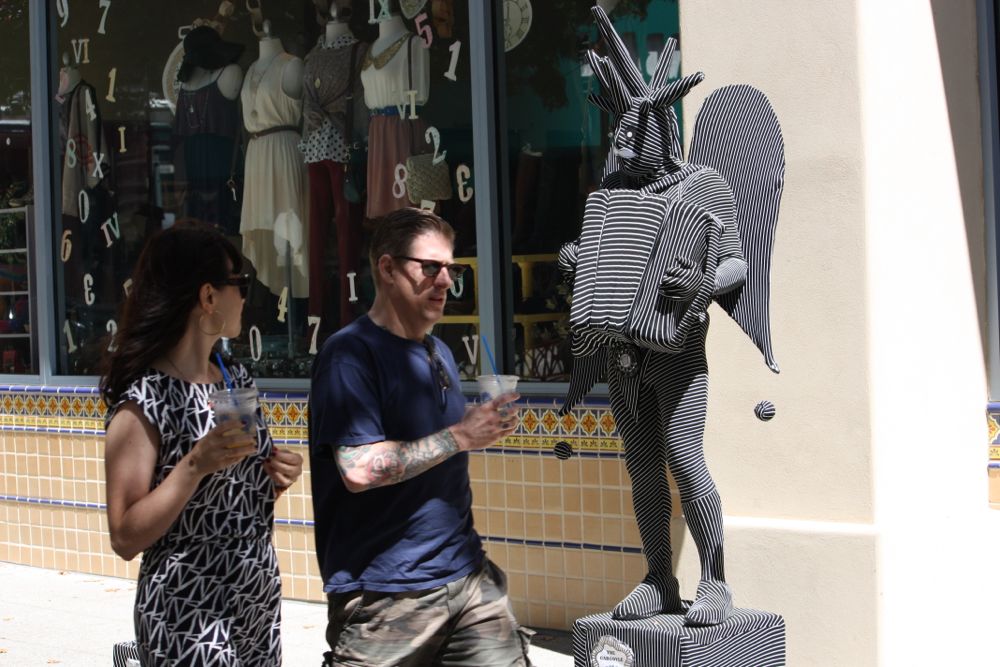 Pacific Avenue is the main street that every city in America says that it wants: a truly public crossroads where everyone comes together to talk, meet, celebrate, incite, shop, dine, or just hang out.

But here’s the joke: if a town ever gets such a place, citizens start complaining at once. Because a truly public meeting place is open to the grim side of life as well as the pretty side. And this is true on Pacific, 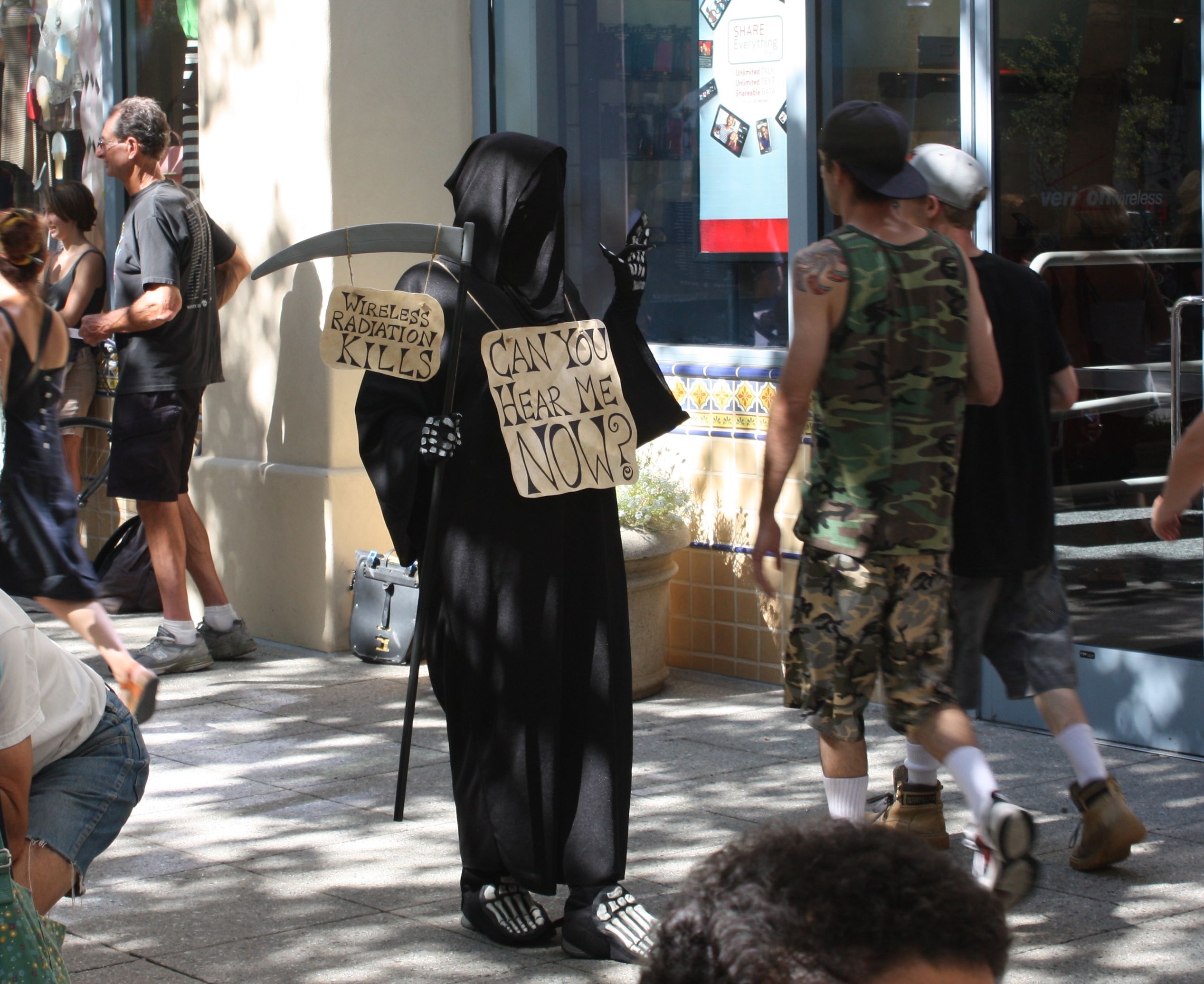 Some people prefer the Disney version of reality, which holds only the things that make them happy. But for that you need walls and an admission fee. Such things are not the point; in fact, they’re the antithesis of the point.

I know people who never go to Pacific Avenue. Others can’t stay away from the place. Even when they leave the area, they do so on a long, strange orbit that will bring them back to Pacific once, twice, or three times as the years pass. They go, they come, and they come again. 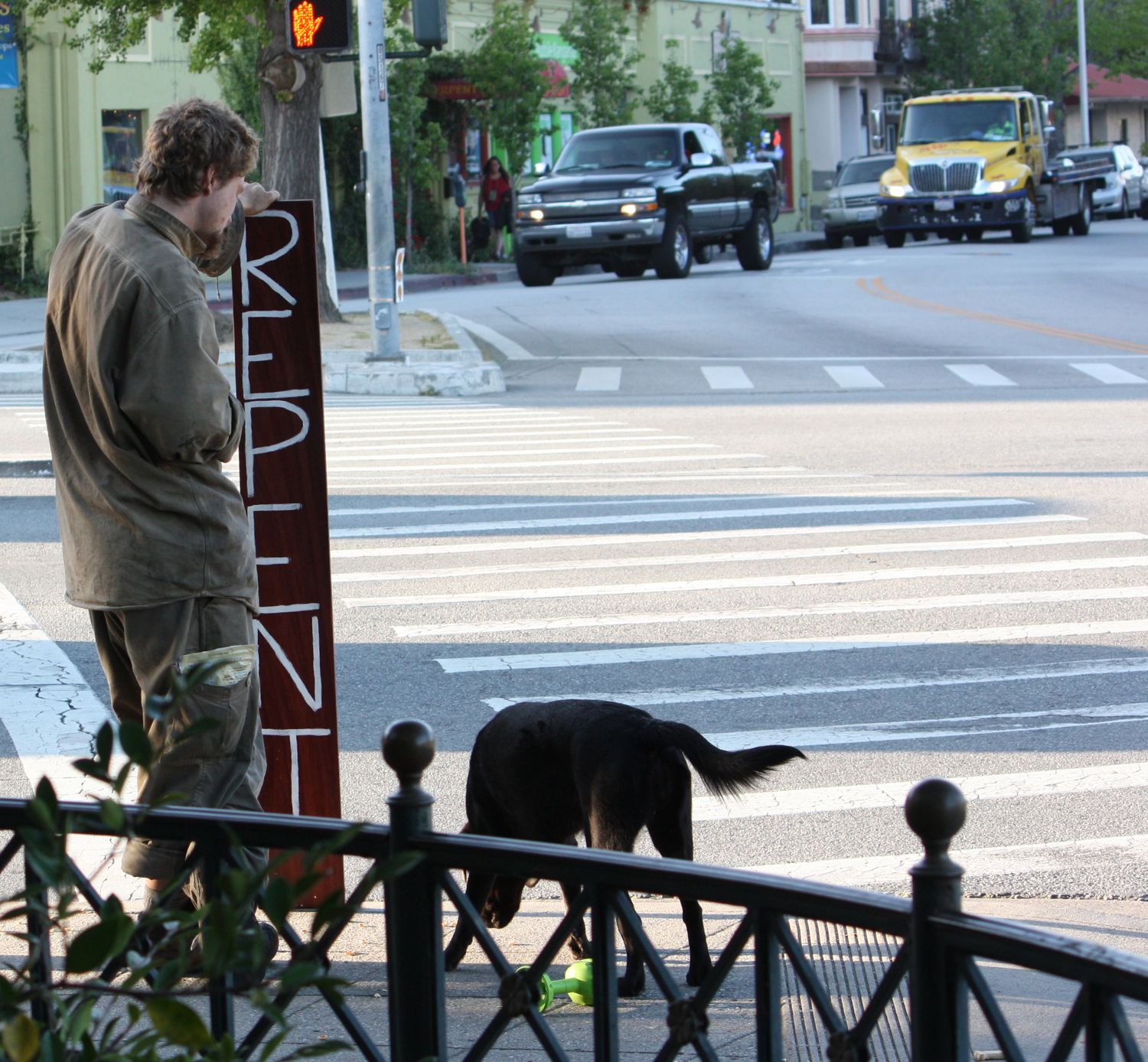 Which is why, on my last lap down Pacific, I ran into a Hindu god named Kevin. I hadn’t seen him in several years. But whenever I had seen him, from time to time over the past decade, I’d seen him on Pacific Avenue.

Kevin and I met years ago as fellow employees at a school for homeless children. I was an out-of-work high-tech drone looking at a career in education. Kevin was an old hippie more at home in the wilderness than in a house. He made his very small living as a nature guide and resource person at alternative schools, summer camps, and the like. He had no fixed address; he liked life simple, and as close to the land as possible. When I knew him, he was living in his jeep — not one of the large or fancy ones, either.

Kevin had spent a lot of time in India, where he developed a sort of whole-face-and-head beard with integrated mustachios that extended six inches from his face in all directions. Solid silver it was, around a face as tanned and wrinkled as any Hindu holy man’s. He wanted to go to back India someday, when he qualified for Social Security. “You can live really well there on a few hundred bucks a month,” he told me several times.

We got along very well because Kevin was a live-wire, a talkative guy; and because we’d grown up only ten miles apart and had a lot to talk about. But he was eight or ten years older than I and had jumped straight into the whole Summer-of-Love alternative lifestyle scene that made the ’60s so interesting. And unlike most, he stuck it out. It suited him. He made his own way through life and had enjoyed it.

We both left the school and went our own ways. But every couple of years I’d see Kevin on Pacific Avenue as he orbited through town. Each time, the orbit grew wider and longer: from a cabin up beyond Big Basin, to a homestead out beyond Yosemite, to places even further out. And finally, he disappeared.

Until today. Smaller, older, but vigorous as ever. And unmistakable. I stopped him in the street and we talked as if we’d last met yesterday. He’d finally made it back to India.

“I’m middle-class there, man,” Kevin said. “I get $500 from Social Security, live on $300 and bank the rest.” He’d settled in the North, away from the heat and the cities in a place he’d lived before. He worked with orphans, loved the people of the countryside, and was perfectly happy with his life.

But Pacific Avenue called him back. Literally.

“It’s like those lizards with the three-foot long tongue,” he said. “I was on my way to Nepal when BAM! That tongue just caught up with me and pulled me back.”

It was a supoena. Twenty five years ago Kevin had been nearby when an insane man tried to hack someone to death with a machete in from of Lulu Carpenter’s coffee house on Pacific. (Which was, coincidentally, about where Kevin and I were standing.) Kevin was not the closest witness, but he was the first one to give his name to the police. Twenty-five years later, the attacker was finally judged sane enough to stand trial. And the DA sent for Kevin.

“Why didn’t you just ignore the supoena?” I asked.

“Because supoenas have a way of turning into warrants,” Kevin said, “and warrants are bad news.”

“Did they pay for your trip?”

“Nah. They said they’d pay mileage, so I’m going to submit a claim for 15,000 miles. They’ll wiggle out of it, but I’m going to have some fun with them.” He chuckled, eyes flashing.

At that point a stout young woman with the look of Doing Good walked up to us and tried to persuade Kevin to come to her community supper. He turned her down politely.

“Ah, she keeps trying to feed me,” he said. “Look, great seeing you but I’ve got a couple of things to do and this — ” he spread his arms wide to encompass the street and the people and the buildings “– is my office!” He ran across the street and out of sight.

Maybe he’ll orbit back through in another five years. As for Disneyland, you can keep it. 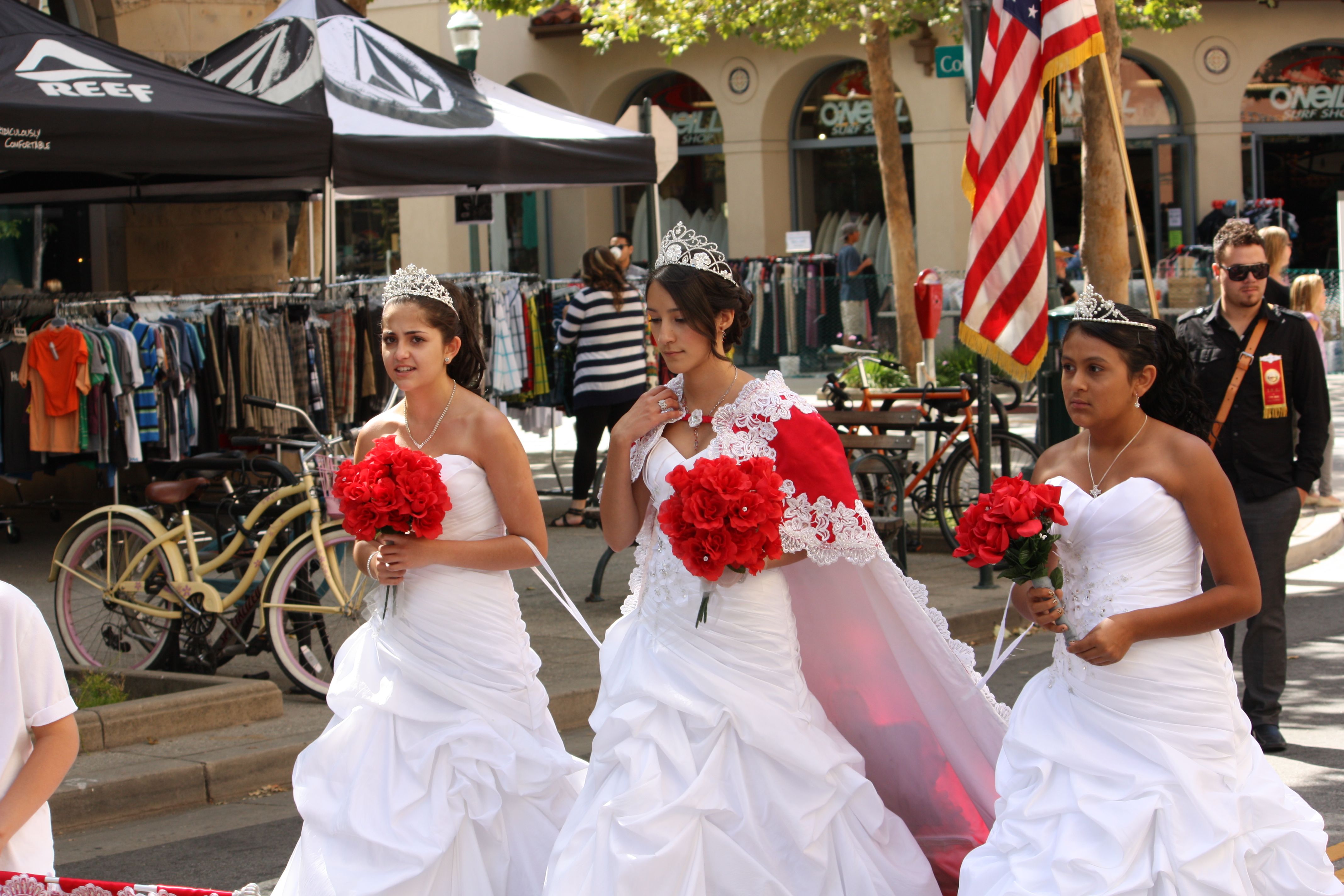 11 thoughts on “Tuesday After Lunch”