Rhumba and I both work. Moreover, we carpool. I pick her up each evening, and we head for home.

And, silently, we each review what awaits us there: Two hungry cats with special dietary needs. A freezer-full of plain and healthy casseroles prepared last weekend, which require a half-hour to microwave. A table to set and dishes to clear afterwards. Phone messages to check, mail to bring in, trash to take out.

And if we are weary enough, one of us turns to the other and says one word: “Palomar?”

“Palomar,” the other agrees.

Every town has a venerable, reliable restaurant that its citizens use as surrogate parents: the people who care of you when you’re too busy or weary or fretful to take care of yourself.

The food’s reliable and moderately priced. The wait staff knows you, as they know everybody, and nods companionably as the hostess guides you in. The dining room has character: not calculated by some restaurant designer, but homegrown from disparate elements that melded into a whole as the years passed.

In Santa Cruz, for us, that place is El Palomar. It is a Mexican restaurant. It will serve you crab enchiladas for twenty dollars, or as fine a bowl of beans as you will ever eat, for three. And fresh corn tortillas made on the premises, hot and sweet. And salsa that burns the back of your mouth, and makes you like it.

But if the Palomar stands in for your parents, they are eccentric ones. And there is only one waitress for the entire dining room. Her name is Hydra. Of her, more later.

El Palomar occupies what was the dining room of the Hotel Palomar, as classic a piece of ’30s Moderne architecture as you will ever see. The hotel is long gone; low-income housing occupies the upper floors. But the faces of dead Spaniards still leer down from the eaves. 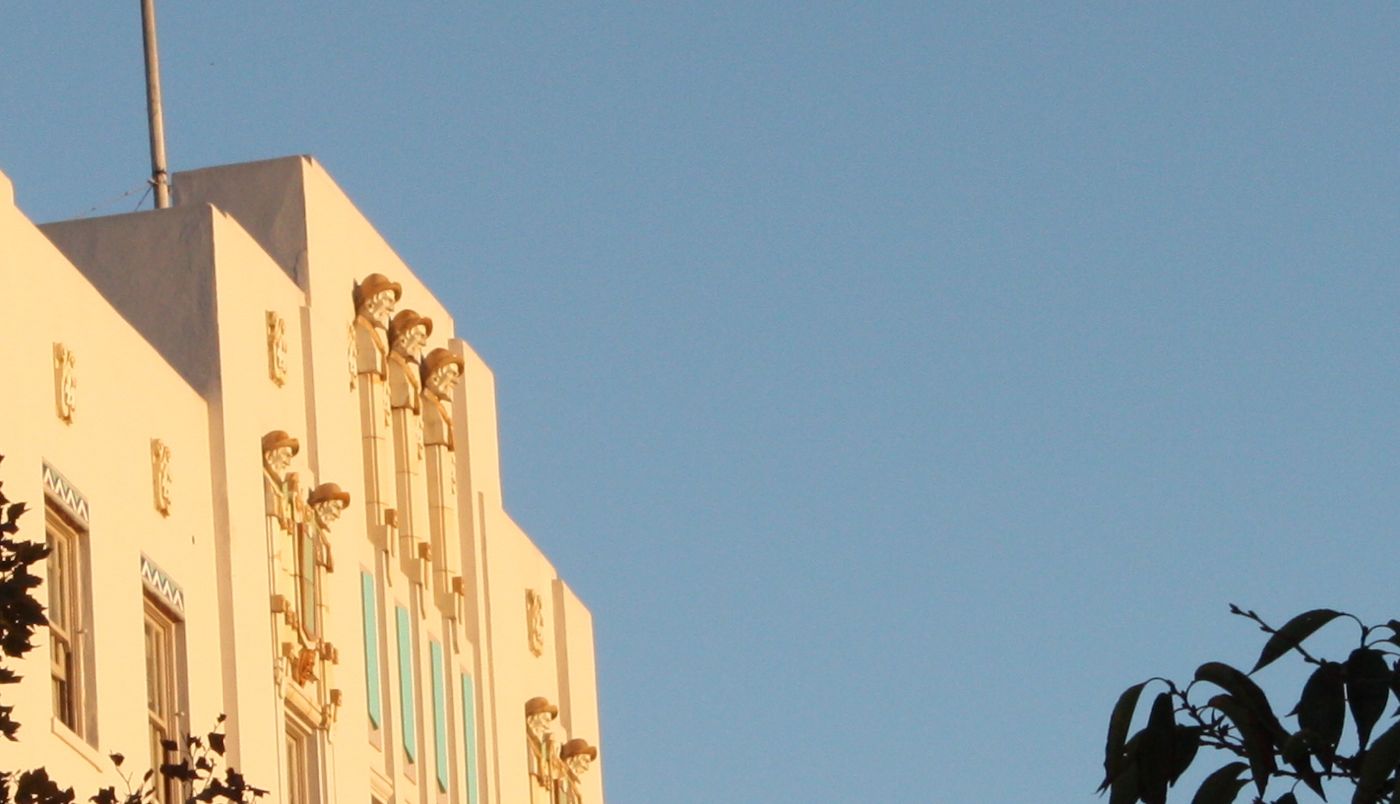 As you traverse the old hotel lobby, more faces stare at you from the ceiling, lit from below for maximum creepiness.

Then comes the dining room, and suddenly you walk onto a 1930’s movie set. The ceiling lifts 40 feet on titanic arches which preside over a companionable darkness full of booths and balconies, hanging lanterns and potted palms, dark beams and painted panels. 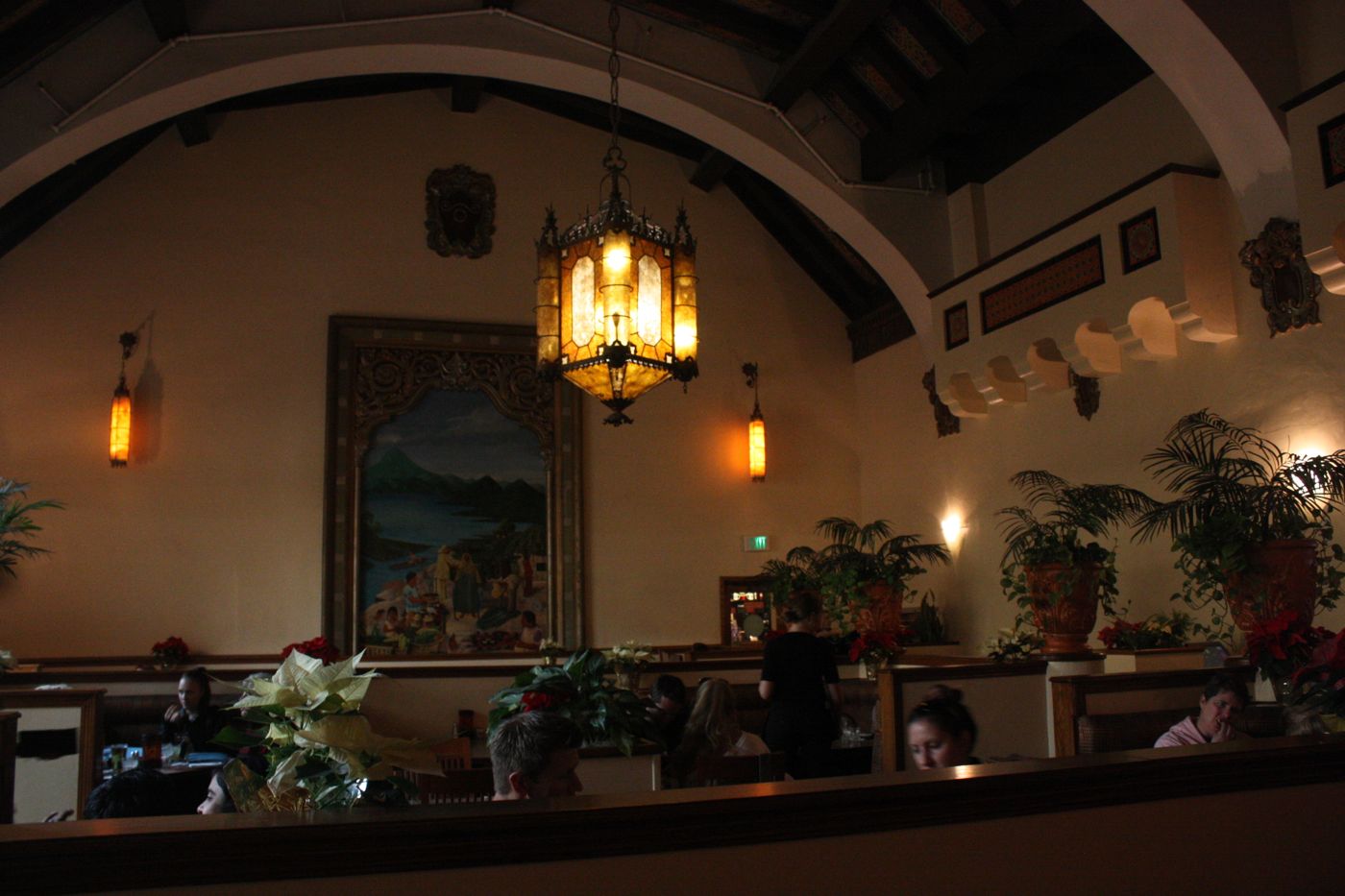 Carmen Miranda might make an entrance from the bar at any moment; Bogart and Bacall could sit in a dark corner booth, plotting the best way to escape a vengeful mob boss. 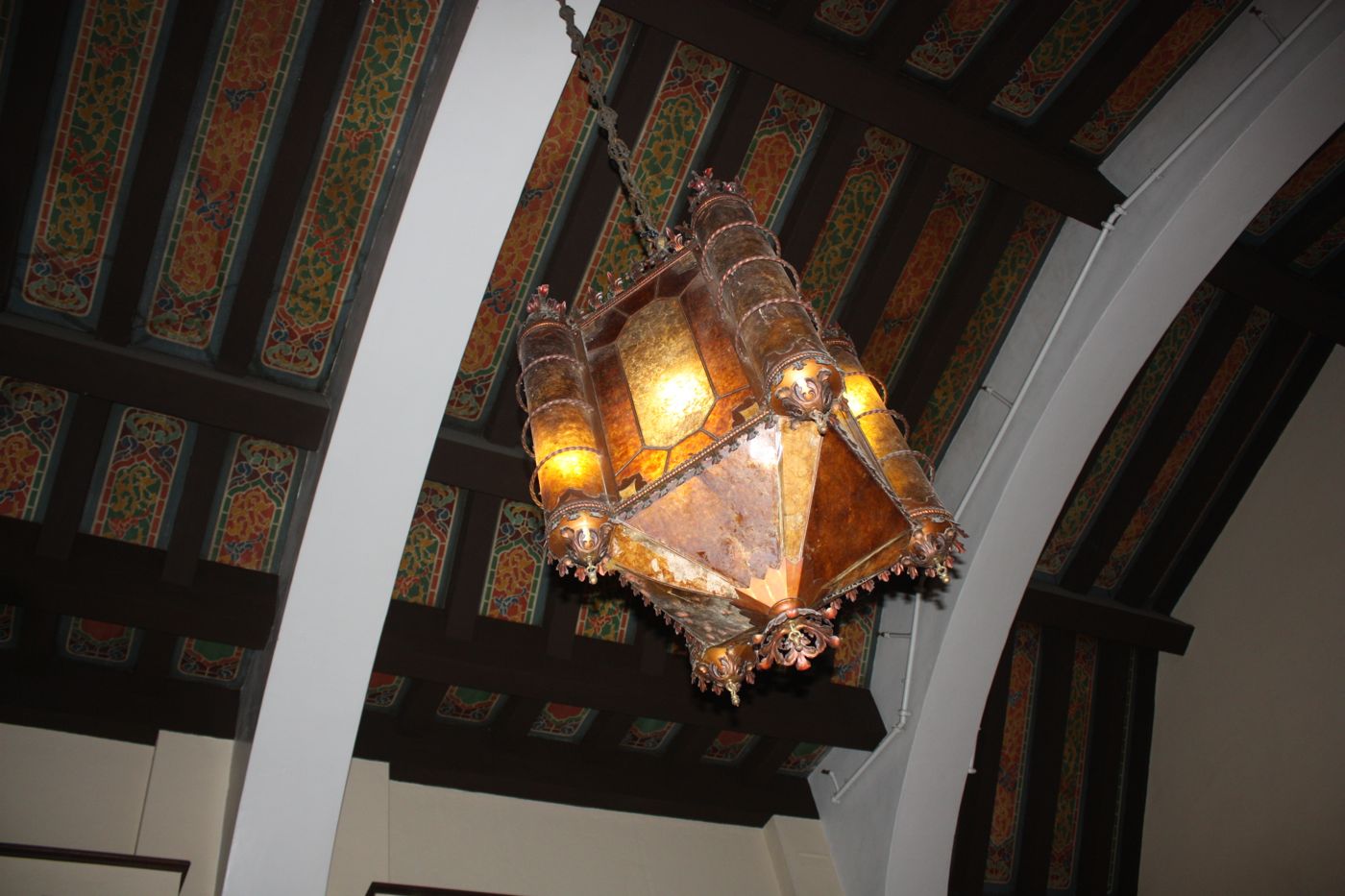 For years Rhumba and I speculated on the decor; what exactly was it supposed to be? What fantasy fever dream had the decorators brought to life back in 1932? A Moorish theme? Persian? Arabian Nights? Certainly not Egyptian. Then one day we noticed the dragons carved into the green stone fireplace.

Hollywood Chinese. Should have known. Overlaid with a few Mexican touches, but otherwise maintained intact. Who would want to change it? 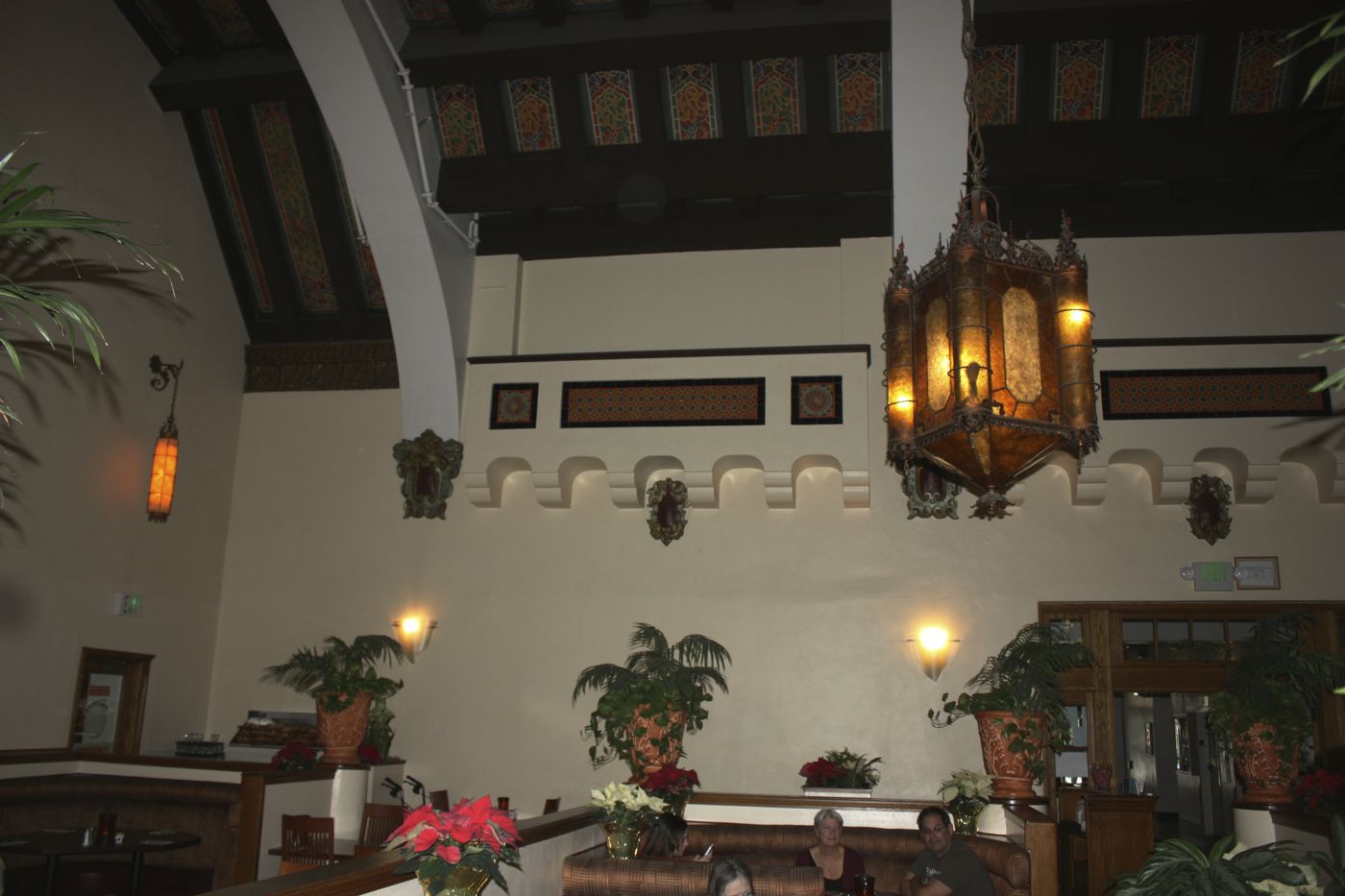 Dimness is the watchword here; in few other restaurants is the dining room darker than the bar. Servers in black clothing merge with the gloom, unnoticed by you until a disembodied hand throws down a bowl of tortilla chips or a smiling face materializes, floating in air, to inquire about drinks. I exaggerate, but only in a literal way. 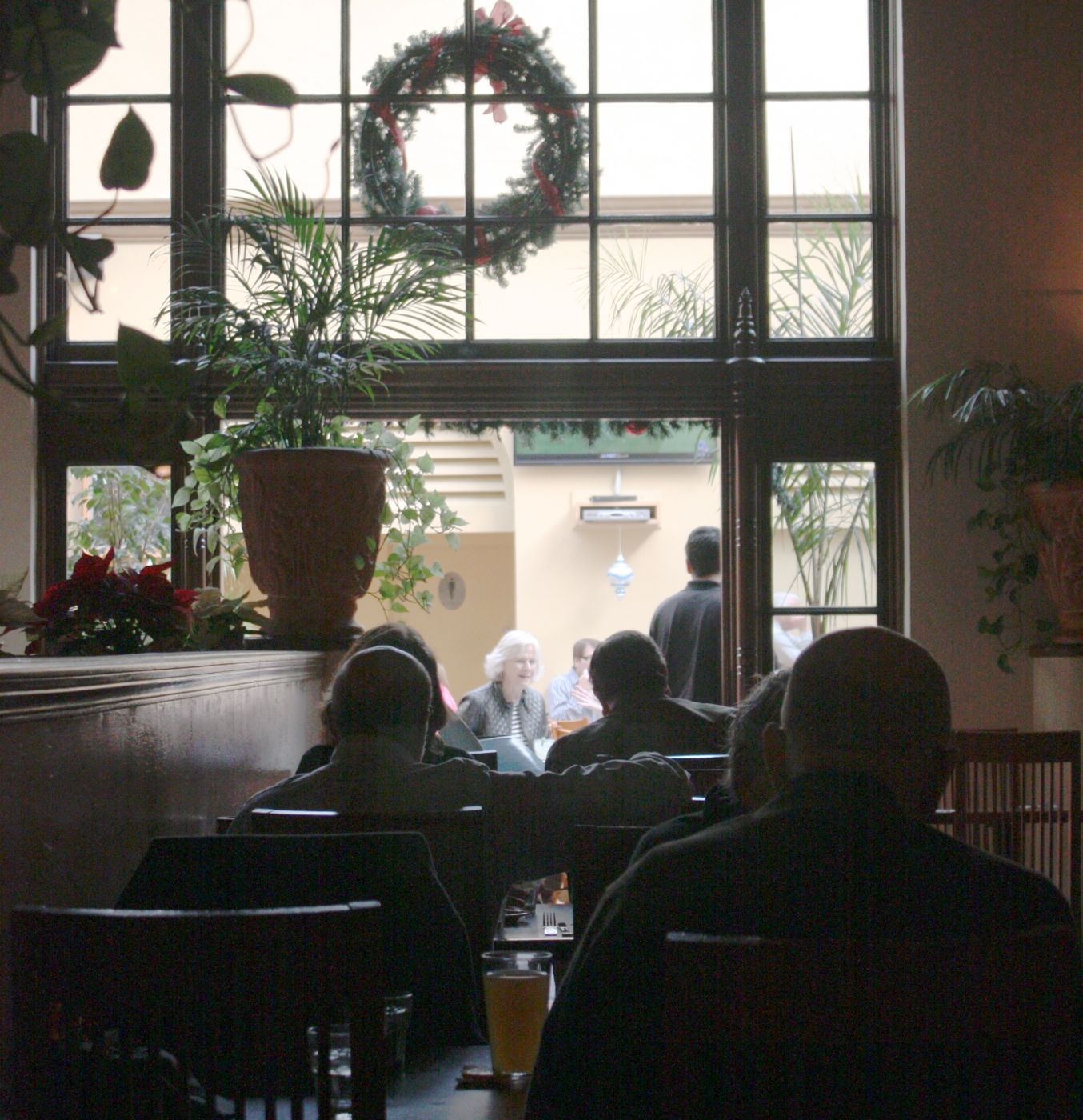 And in that same way, there is only one server; I call her Hydra, after the creature of ancient Greek myth that had many heads. Though while the Hydra of legend breathed poison gas, the heads of this Hydra brings salsa and iced tea and tequila drinks. It is one being in many bodies.

One head of Hydra may take your order, but another might bring it. A third may bring your chips and water, or the first will. Iced tea may be topped off by anyone. Your check may appear from any hand: it may appear magically on your table, the departing back of a fast-moving hostess being the only clue to its arrival. Your credit card may vanish and return just as mysteriously, though the sound of “thank you” may be left hanging in the air by unseen forces. 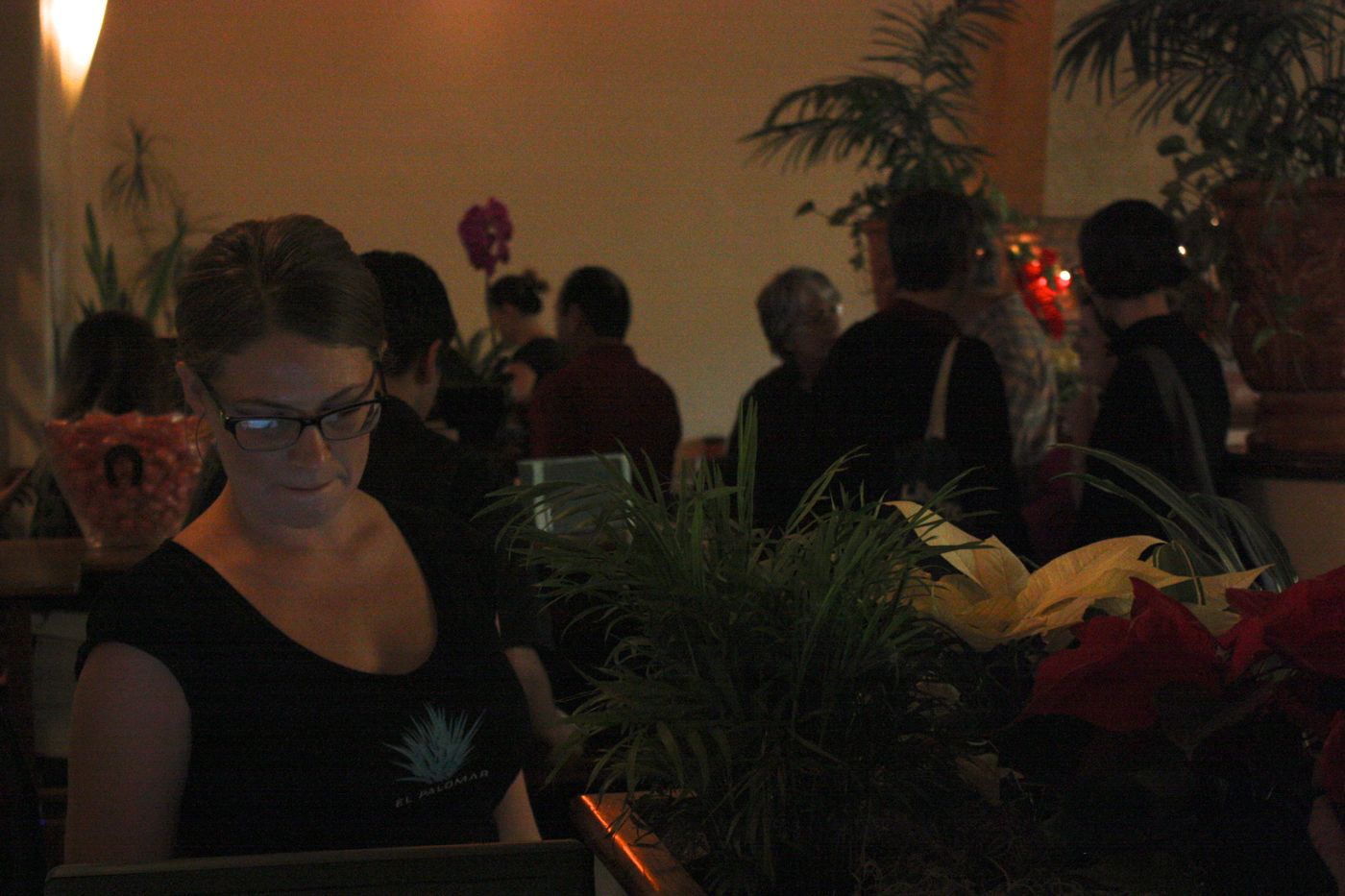 And yet Hydra has your best interests in mind; the order is correct; the glasses, always full. Any complaint, quickly addressed by one person or another. Hydra knows what you like and how you like it, even if you have never met that part of her before. For she is a group mind that shares what it knows among all her component parts. Who are each formidable on their own merits. This is Theresa: 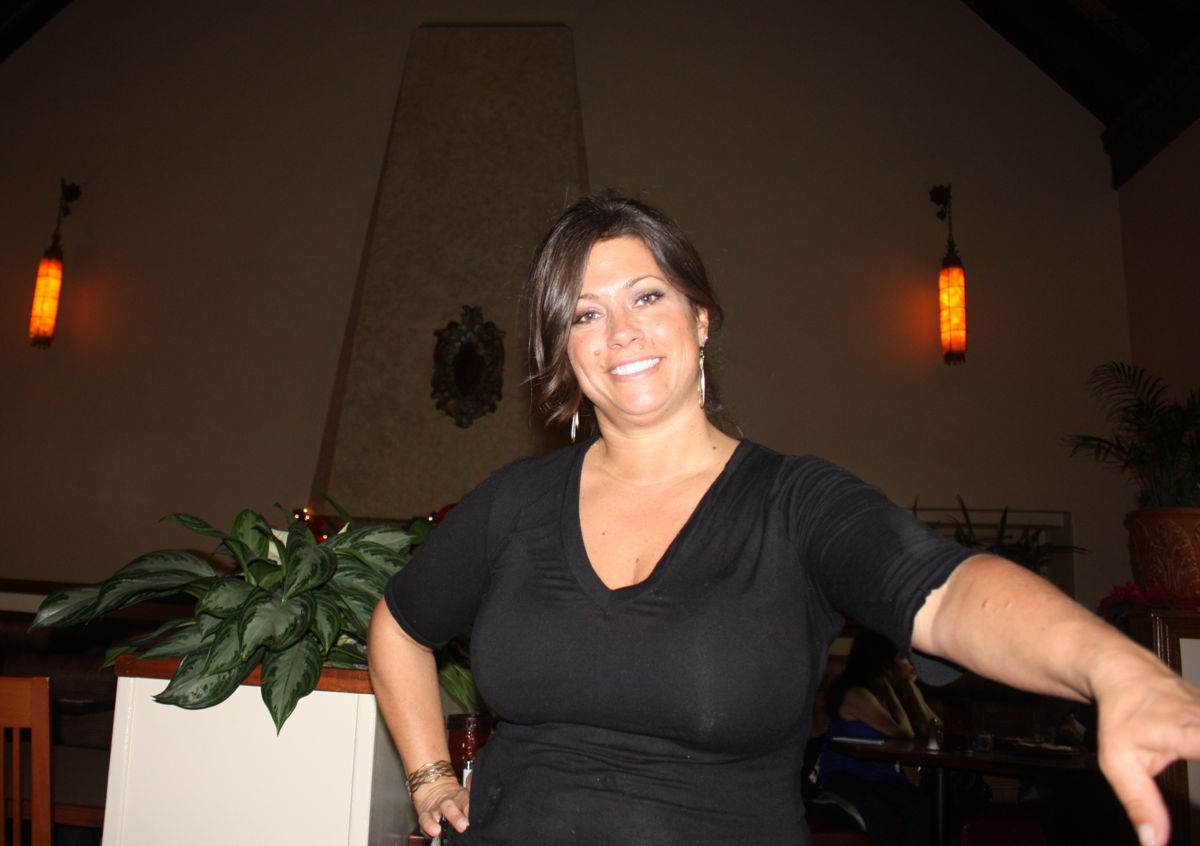 Hydra’s only weakness lies with tortilla chips. She thinks you should have many bowls of them. Truly, the chips are fine: warm and fresh and served with tubs of that scalding salsa that I have been known to drink straight from the container – sometimes to my regret, later.

And when you finish your bowl of chips, Hydra will offer you another; and another; and another. Sometimes she won’t even ask; she just brings. Rhumba and I draw the line at one bowl, or we’d have no room left for dinner. So when our waitress offers a refill, we refuse.

And that should end the matter, but it doesn’t; other arms of Hydra see the empty bowl, and swoop in to fill it.

“No more chips!” we shout: again and again. For it is here that the group mind breaks down; to each head of Hydra, the sight of a table without a full bowl of chips is an obscene, horrible thing that must be erased. We do our best, but sometimes Hydra sneaks a second bowl onto the table and runs away before we can stop her. And then we eat the chips, dammit.

It is a small eccentricity; we almost see it as a game, though I am tempted to bring in a small, battery-operated dome light with “NO MORE CHIPS!” painted across the lens. But in all other ways El Palomar serves us well, and we try to be appreciative, make our menu choices promptly, and run the waitresses as little as possible. Hydra looks out for us, and we try to look out for her as well, though we are old and finicky and eat inexpensively. She doesn’t seem to mind at all.

Things change; so do restaurants. But while the Palomar remains and Hydra lives, it is for us that phenomenon well known to social anthropologists of the modern age: the part of your home that’s not in your house. It makes life a little more bearable for two aging wage slaves; and I hope that wherever you are, if you need her, you have a Hydra of your own.

6 thoughts on “A Waitress Named Hydra”