It looks like mud.  No child would ever drink it. It takes off the top of your head. And I think I’m love.

This year a gourmet hot chocolate shop opened in a hip but ramshackle space a couple of blocks from our house, and Rhumba and I have been in there every two or three days ever since.  I might as well just sign over a paycheck every so often.

The staff prepares chocolate in all imaginable liquid forms: “regular” hot chocolate, if you call varieties like “Himalayan Pink Salt” and “Venezuelan Cumboto” regular.  There is “brewed chocolate,” brewed from roasted, ground cacao beans in a French press.  It’s like tea, yet unlike any other tea.  They make smoothies from the sweet pulp of the cacao pod that surrounds the cacao beans themselves.

And as you climb the step-pyramid of chocolate preparations, it just gets weirder.  Above lies no happy, friendly American-style chocolate.  Above lies the fiercer sort, resembling the xocholatl that the Mayans invented and the Aztecs prized.  Men in feathered headdresses peer down from on high.

Next come the Euro-style sipping chocolates, 70 percent pure, very thick, and served in an earthenware cup.  The taste can be intense; especially when made with water, not milk: the Mesoamerican way.  If the guys behind the counter like you, they’ll make it even thicker than usual so that a spoon, if stood vertically in the mixture, remains erect when you remove your hand.  The sight has drawn gasps from women of mature years. 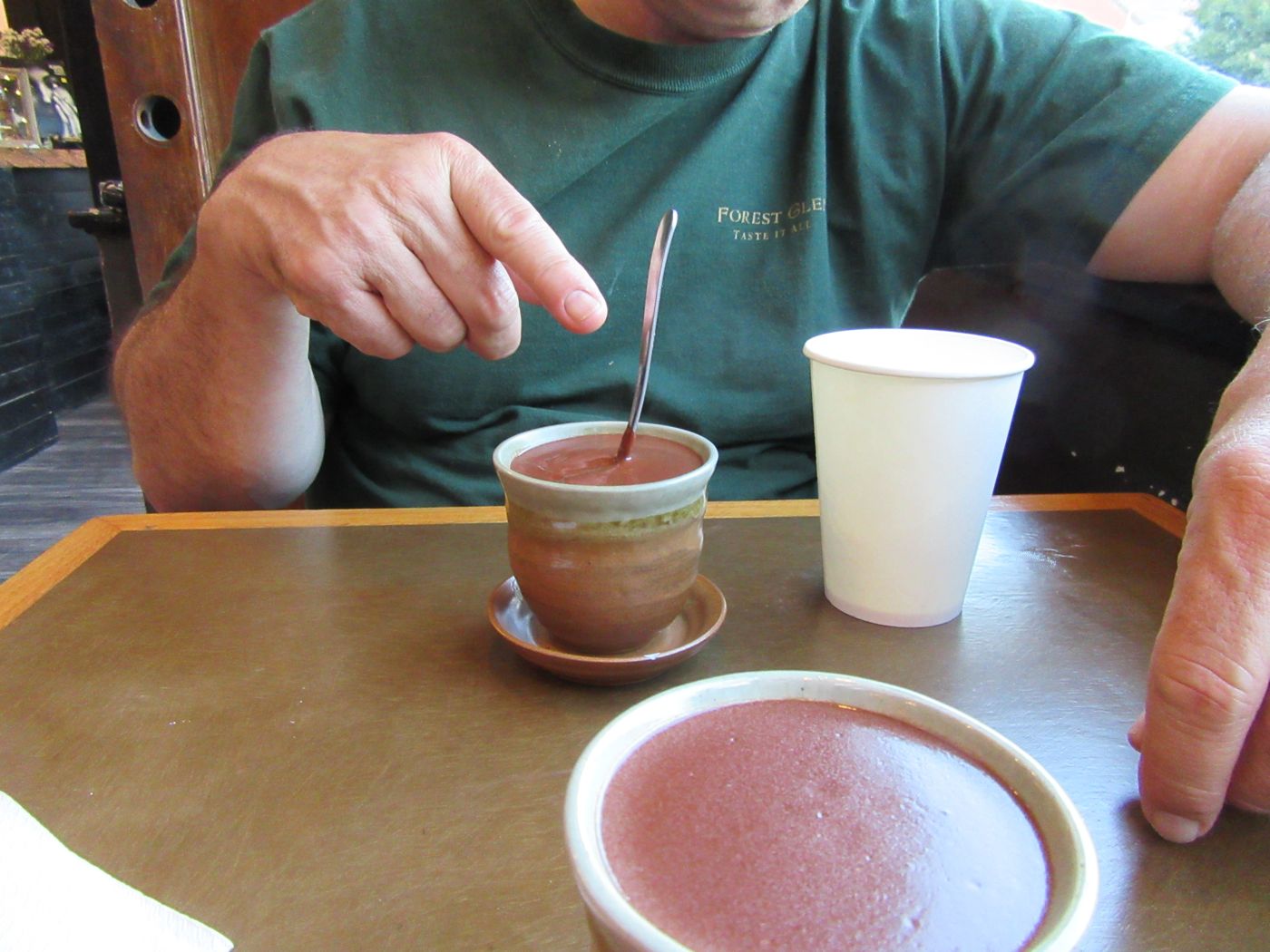 And it’s psychoactive.  One cup messes with your head, but just slightly.  You’re alert, relaxed, a slight bit happy.

Drink more than a cup, however, and the priests in feathers begin chanting prayers to Quetzalcoatl.  You will feel FINE. Emphatically FINE.  Your mind will race.  You’ll feel creative. You’ll stay up until one in the morning on a school night, doing productive things.  You will sleep soundly and dream of dead relatives or imaginary countries. I think they’re imaginary.

You will wake up at 5:30 in the morning, feeling FINE.  You’ll work a full day, productively, until you start to fade around six in the evening.  At which point you may decide to have another cup of sipping chocolate.  And once again, you’ll feel FINE.
The cacao tree’s scientific designation is theobroma cacao: literally, food of the gods.  Chocolate is divine, and always has been. Historians say that the Aztec emperor Monteczuma II drank 50 cups of xocholatl a day.  I wonder if his feet even touched the ground.

And that’s why Rhumba and I don’t get sipping chocolate every day.  It could easily become of our basic food groups… and lead us down odd paths.

Because beyond sipping chocolate lies one more flight of stone steps. It leads to the very top of the pyramid where the priests dance and remonstrate with the heavens:  the 100-percent pure Venezuelan Cumboto.  The 100-percent contains no sweetener of any kind; they grind it with stones for 50 hours to reduce the bitterness.

Then it is mixed, caked, baked and ground until thick as mud and red as blood, for clean-cut young men to serve to you in a special black cup.  The very finest chocolate is red.

The hundred-percent is strong and bitter, without the faintest hint of sweet. Many wouldn’t care it.  But one cup of the hundred percent takes you far, far beyond FINE.  It will make you drunk everywhere save your head.  Your muscles loosen; the skin crawls on the top of your skull. You have the energy for anything that you want to do, and the will to do it. I’ll be sixty in a couple of months; the 100 percent makes me feel like a somewhat creaky 25-year-old.

I had a cup one Saturday after breakfast.  I slogged through six hours worth of household chores and business without eating, then went to the gym and pushed twice as much iron as usual. I walked out the door feeling strong and energetic, went home and had dinner.  Lay down for a moment, and the next thing I knew it was three hours later.  I got on the computer and wrote until one in the morning.  The next day was almost as good.

It’s little-known, but the Aztecs gave their warriors xocholatl before battle so that they could fight all day without even stopping for food. The hundred percent would do the job. Believe me. I could get to like this stuff too much.  I limit myself to one a week.

And who are these people who brought Mesoamerican war beverages to a seaside college town?  A couple of youngish brothers with some ideas and serious chocolate mojo, but no money.  Creative guys, trying to make a start before too much of their youth slips away. And there was a Kickstarter campaign and they carved a little space out of a shadowy old restaurant called Maison Peut-etre and started serving hot chocolate and bottling their mixes for the gift shop trade.

It’s a dream.  Maison Peut-etre overflows with them.  The Maison is a pop-up venue: open several nights a week but with a different chef and staff and menu each night.  All the chefs dream running restaurants but don’t have the money —  just dreams.  At Maison Peut-etre, everybody dreams: and works their butts off for the glory and word of mouth that can make dreams real.  It’s a hard world to make a start in with nothing but sweat, ideas and a few friends who work cheap.

The chocolate shop staff is of this sort: no sullen teenagers here, no college town slackers.  Instead, energetic, handsome, post-college young men from the liberal arts, working two or three part-time jobs to make ends meet in a world that does not value their educations.  They’re friendly and forthright, and several cups of war chocolate a day no doubt helps with that.  They pick up extra jobs and gigs wherever they can, at the pop-up operations and beyond.

And while the young men maintain headway in life, there’s no good course ahead. No dreams have yet come true in Maison Peut-etre.

We spotted one of the guys walking to work juggling full-sized Indian clubs.  “You’re a man of many talents,” I called.  “No, I’m a man with a lot of free time.” One of his seasonal gigs was coming to an end.

They leave for months-long road trips in elderly cars, go back east to visit relatives, or just disappear for a while.  But the young men always come back, and serve us chocolate.  They have no better place to be. Maybe they’ll go back to college, they tell me. Maybe not.

Underneath the smiles and self-assurance, sometimes, cynicism and sadness breaks through.  “All my friends are depressed,” one of them told me. As was he, behind his big, white smile. His eyes radiated stress, and yet he was considering a degree in counseling to, he said, help others.  I told him to take care of his own emotional needs first and foremost, or he’d have nothing to offer anyone else.  Now he treats me like some kind of sage.

Except for the brothers who own the chocolate shop, who are a decade older, the young men are as apolitical as can be.  They know little or nothing.  Sometimes I wear my “Bernie 2016” shirt  when I stop in, and they say that they want to ask about Sander’s positions sometimes. It hasn’t happened yet.

It’s like watching water go stagnant behind a dam.  It wants to move, it wants to do. But immutable economic and political forces block the way ahead.  Seemingly immutable. But always political.

An entire generation, except for the well-funded or fortunate, has been told that it’s  unnecessary except in its ability to consume.  Struggle as they might — and I see them — I wonder if they’re beginning to believe it.  As the young opt out, past generations and ancient oligarchies maintain their grip on America. Don’t tell me that’s not by design.

Yet I see these bright young men — and women — and can’t but think that they will prevail.  They’re so capable. America will need them someday; heck, it needs them now.  It just doesn’t want to pay for them.  I’m an old guy who gets jazzed on chocolate and feels young for a few hours.  But they really do have the power of youth and the power to do.  I don’t like seeing it fizz away serving me Aztec chocolate drinks.

The Aztecs, in fact, had a world-view that was pertinent to all this.  They believed that cosmic disaster was eternally imminent, to be kept at bay only by rigor, devotion, and sacrifice.  The Aztecs had the bravery and guts to drive Cortez the invader and his guns and horses and steel out the gates of Tenochtitlan.  And yet later were brought low in large part by the smallpox that the Spanish had brought.  So perhaps the Aztecs had a point about the nature of the universe.

And, from the grave, they may still have one.  We face a dozen potential Cortezes — runaway climate change, drought, famine, war, plague, mass migrations, and ignorance.  Always ignorance. Shall we throw away the generation that will fight them for us, and collapse as a failed civilization?  Or feed them spiritual chocolate — which is nothing more or less than the food of the gods — and unleash  them to drive off the dangers that we ourselves have let inside the gates?

The choice is ours.  I wonder if, right now, the Aztecs would think us mad

7 thoughts on “The Food of the Gods”