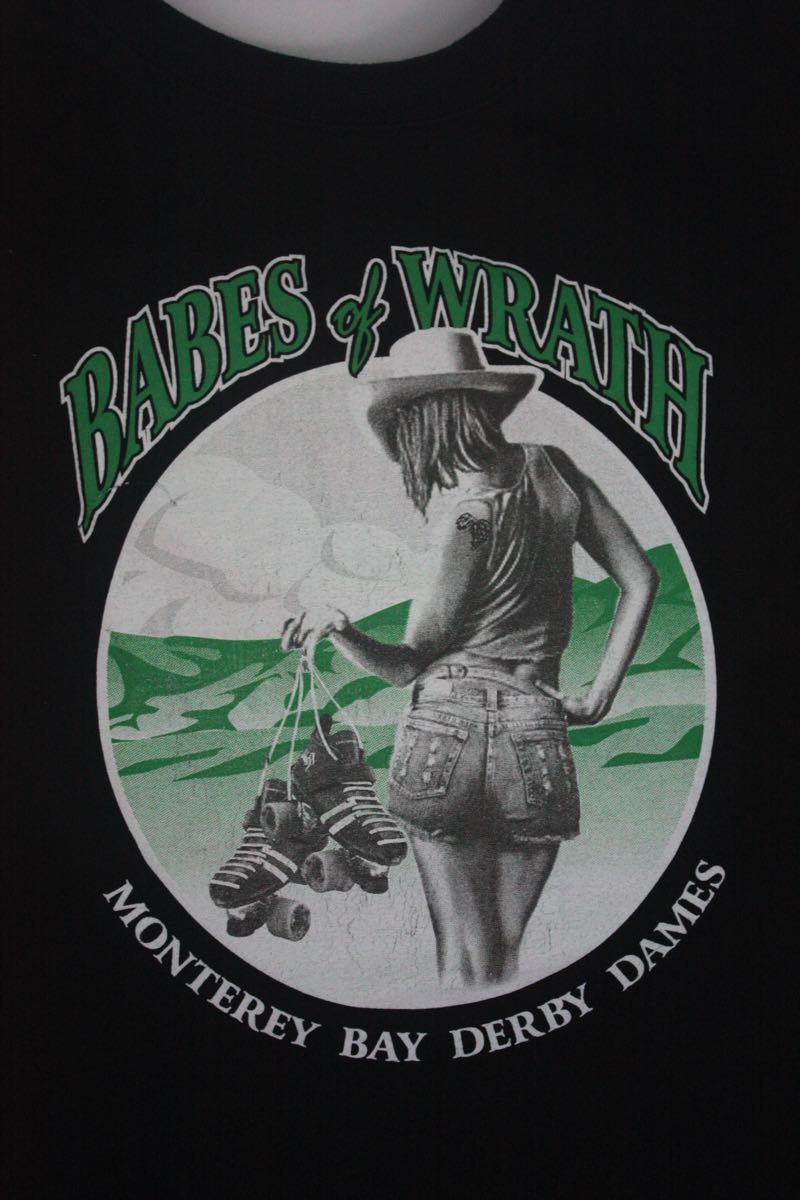 My t-shirt collection is not without a few women’s roller derby tees.  I like them. They’re colorful, bombastic, and fun.

One t-shirt in particular is my favorite:  it depicts a hard blonde with skates in her hand, gazing up at a dry California hillside. Her face is hidden. The league name is given as “Monterey Bay Derby Dames.”  The team name? “The Babes of Wrath.”

That name brings a smile to this old John Steinbeck fan. Monterey Bay here in Central California is Steinbeck territory, along with nearby Salinas where Steinbeck grew up.

I grew up in the same state, a little later and a ways distant. Still, the people who raised me were of the sort that Steinbeck described: cleaned-up and better-paid and working factories now instead of the fields. But in their youth they’d picked the same crops and drunk the same wine and fought the same fights.  Steinbeck celebrated them. To read his books was to read about where I came from.

So he was one of my early heroes.  One of the others?  We’ll get there.

Like Steinbeck, Roller Derby was big in the mid-20th century: Leagues, tours, television: the game was everywhere. By the early ‘70s it had lost popularity and faded: only to be resurrected by women who wanted to have what the old roller derby queens seemed to have.

Here’s the popular version of old-time women’s Roller Derby: all those wheeled woman warriors from the ‘40s, ‘50s and ‘60s were tough, gum-snapping working girls from rough blue-collar neighborhoods.  They joined the Derby for adventure, and because they were looking for something better than 50 hours a week on the bottling line at Blotz Beer while fending off the grabby foreman. They wanted to see the world, and they were ready for anything.

The truth was that the players — men and women — were of modest background. They were not famously bold or assertive.  But life could be hard; options could be few. And they saw a chance to do better in Derby than they’d do anywhere else. They found their inner toughness along the way, it’s true, or they didn’t last.

Those old Derby girls (and guys) worked for promoters.  Today’s Derby girls very often run their own leagues as non-profits, with fund-raisers and volunteer work weekends and all that.  They don’t usually get paid, or not much.

So, why do this? Because for women who spend their days behind desks wrestling spreadsheets and doing combat at budget meetings or contract reviews, it’s a chance to let your inner tough dame out to rage.

And so women’s flat-track roller derby was born and propagated.  Today’s derby queens skate on flat courses in gyms and auditoriums; the big portable banked tracks that that old derby teams hauled around are expensive to store and move and maintain.  Once you eliminate the banked tracks, fielding your own local league becomes doable.

Strap on the skates and pads. Position your helmet. Don a derby name like Neon Nightmare or Hell Louise or Skirt Vonnagut.  Glide out onto the track with your arms raised while the announcer shouts your name and the crowd roars. The spreadsheets can wait: prepare to do damage.  And take some.

Who knows? You might be the next Joan Weston: my other childhood hero.

Joan Weston, the Blonde Bomber. Queen of all jammers and women’s captain of the San Francisco Bay Bombers out of blue-collar Oakland, Calfornia.  The Bay Bombers were the finest Derby team ever, or so my 12-year-old self thought. They had my allegiance like the Giants never did.

I watched the black-and-white broadcasts religiously from 30 miles away on the old Philco.  Hell, they might have been color, but the the Philco wasn’t. Live local games at night, recorded games on Saturday afternoon, all on KTVU Channel Two, the big independent TV station.

Joan Weston was five foot eleven of yellow-haired woman athlete from a time when that was an impressive height for a man.  She was strong, physically accomplished, and a master of any sport that she tried her hand at. That’s who the woman on the t-shirt reminds me of.

Weston played pivot: she could break away from the pack like a jammer to try for a score, or hang back with the blockers and play defense.

The point was that in this mob of medium-sized drab-haired woman skaters there was this — no other words suffice — giant blonde Viking in a black helmet, dominating the game.

There was Joan Weston, bursting out of the pack to go raiding for points. There was Joan Weston, holding the line against enemy jammers swooping up from behind.  She could knock them off their skates with a well-placed hip- or shoulder- bump, or a hard forearm. She might even send them over the rail.  And when she was out jamming and the other team’s blockers knocked her off her skates, she was up on her feet in an instant to charge back into battle.

Baseball was fine. Basketball was fine.  But watching Joanie Weston was like watching a superhero.  She even had an arch-nemesis, the almost-as-good but unforgiveably sneaky Ann Calvallo.  People still argue about how how much of Roller Derby was pre-scripted, and that rivalry probably was.  But the rest? I’m not so sure.  Those games looked real. The damage the players took certainly was.

Amidst all the sweat and flying teeth and cheesy spectacle, Joan Weston  was a modest, kindly woman who just wanted to use her talents. She was a monster in college softball, but there was no good career in that game.  In her time only the Derby offered a woman of her physical skills a way to make good money in professional sports. \So she went out there and did battle, and well. She made her money and got out in one piece — as she often said, all she’d ever really wanted.

In the ‘60s, in fact, she was America’s highest-paid woman athlete.  With the caveat that Roller Derby wasn’t a “respectable” sport.  But when today’s  women look back in time for role models, they don’t look at the woman tennis players and golfers of old.  They look for warriors.  The times call for them.  And there is Joan Weston.  And the Derby.  And once again, the Derby is everywhere.

fter the original Roller Derby folded, Joan Weston kept busy with exhibition games and even a roller derby school in the East Bay.  Long unmarried, she finally hitched up to a fellow Bomber from the men’s squad  and taught derby and played softball until she died. The New York Times ran her obit.  Not bad for the star of a sport that wasn’t “respectable.”

So that’s why I imagine Joanie Weston staring up that hill in Steinbeck country.  For Steinbeck’s people, life was a challenge.  It might break you, it might not.  But you perservered.  You tried to be what you wanted to be, and to survive.

Besides, Ann Calvallo might be up there somewhere.  Plotting.

As for the Babes of Wrath, the team no longer exists.  But the Monterey Bay Derby Dames league is still there. These days they field a team called the Beasts of Eden. Stay tuned.