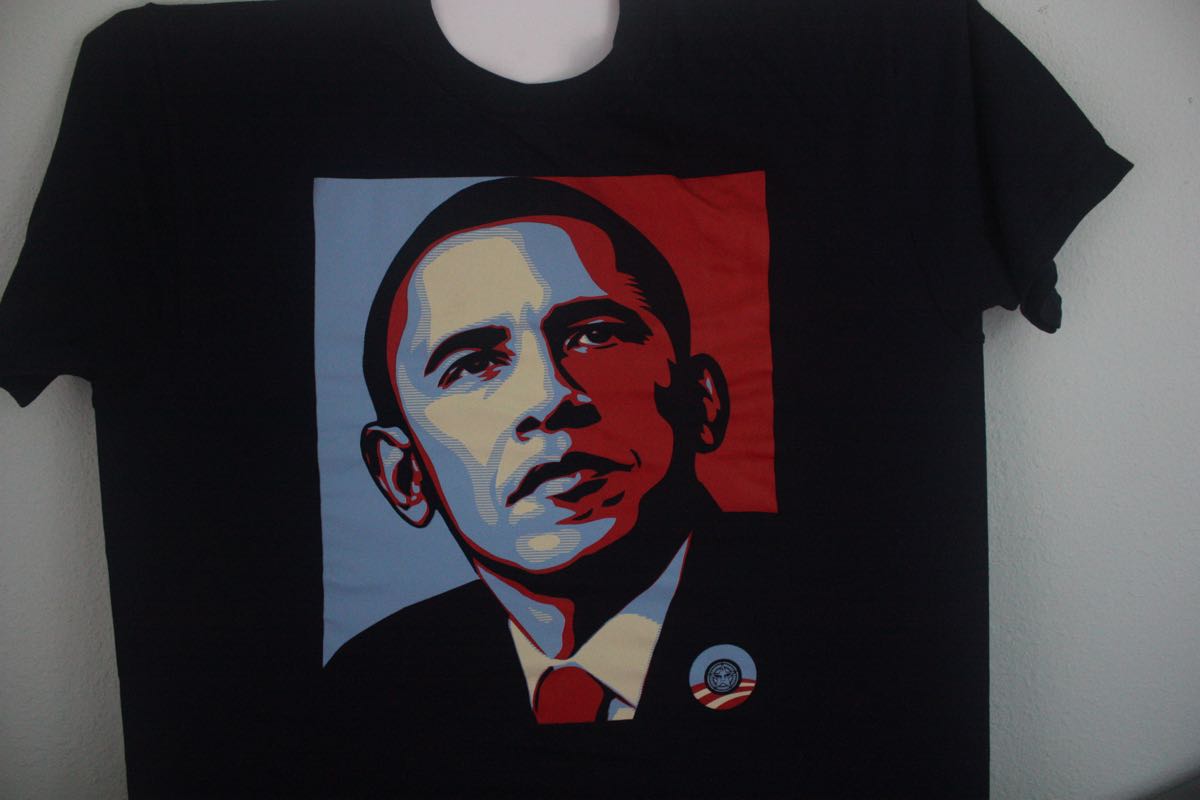 n 2008, street artist and graphic designer Shephard Fairey whipped up a poster of Barack Obama in one day, went out on the street with a stack of them, and sold hundreds in a day.  He would use the proceeds, and future proceeds, to print ever more posters to sell and also to paste on walls himself wherever he could.

Yes, it was the classic Obama HOPE graphic — though Fairey also made variants that said CHANGE and PROGRESS instead.  The image went viral quickly, especially digitally, and became the icon of the Obama campaign — officially, in fact, after Obama asked permission.

And so HOPE appeared in all the media, and of course as a t-shirt: an extremely popular one.  It’s cheap these days to say that Fairey’s image was iconic — but it was.  Powerful, looming, brooding — and hopeful.  As if to say, there’s an adult in the room at last.  And he’s here to help.

Maybe he was.  The results were mixed.  But the thing about icons is that people keep using them. Fairey did more work in the same style at the behest of Obama.  But others used the style, too.  As parodies, an ridicule, but also completely seriously.

The iconic HOPE style is now a universal graphic convention for “hero” or “savior.”  And it has a solid home on t-shirts. Here are a few from my collection 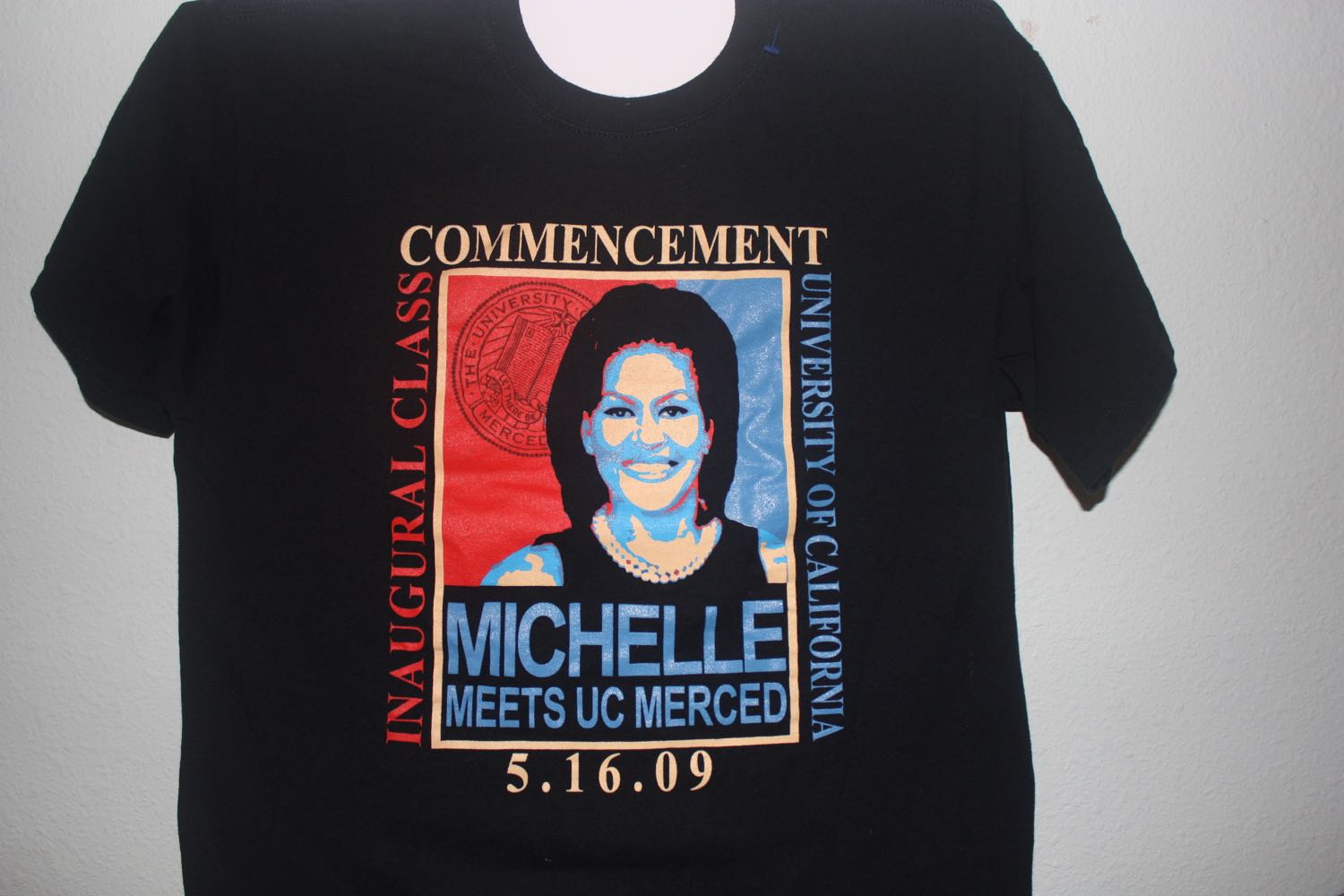 The University of California at Merced, the UC System’s newest and by-far smallest campus, managed to wangle the fairly new First Lady Michelle Obama to give the commencement speech for the school’s very first full graduation ceremony.  Somebody quickly photoshopped a picture of the First Lady with some HOPE-like coloration and put it on a t-shirt for the occasion. 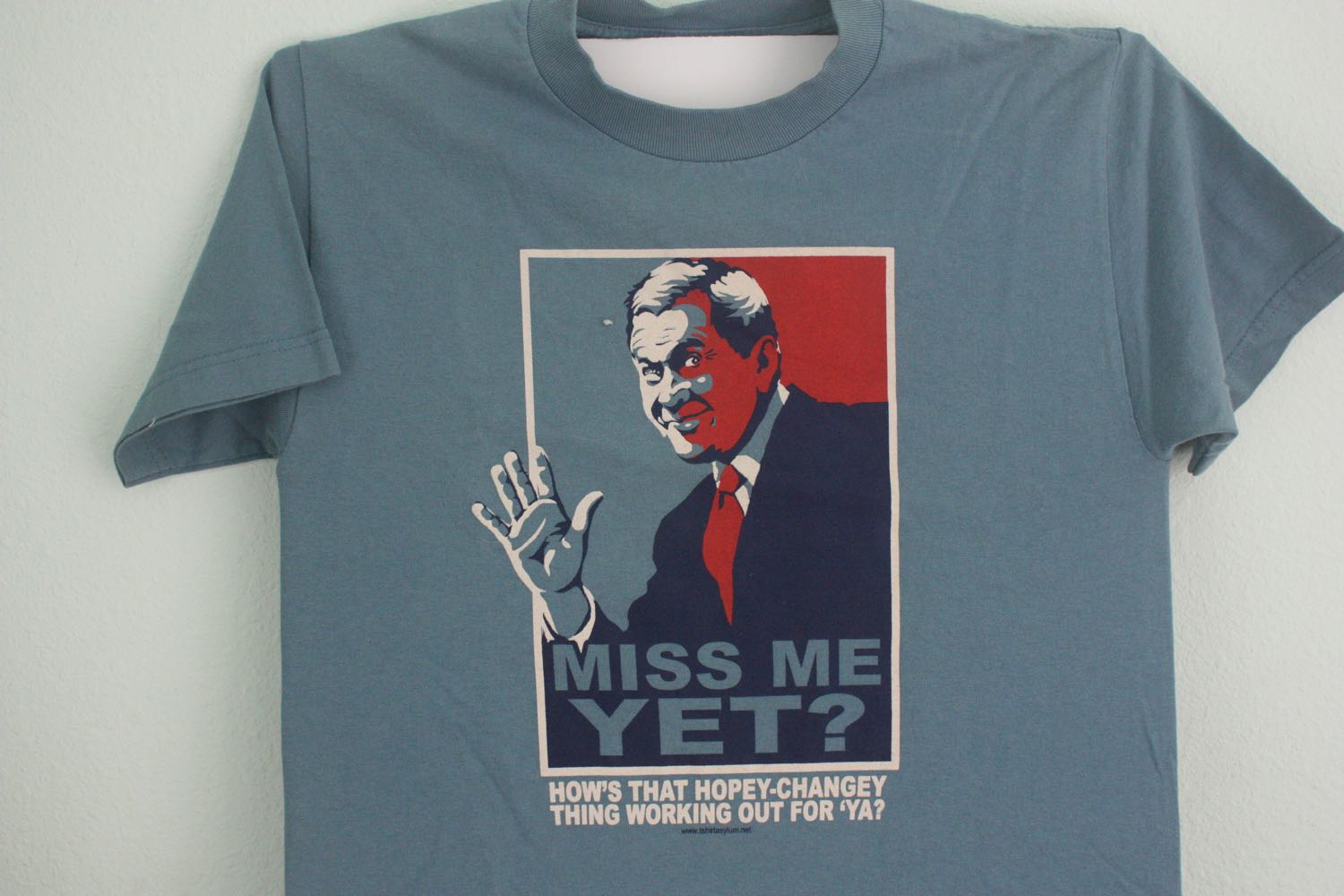 On this tee, a for-profit company that sells conservative-leaning tees rolled out George Bush in HOPE colors to jeer at the new administration.  Most of the most vicious political tees come from third parties, not from the campaigns themselves.  But they can buy and distribute them if they care to, and sometimes they do. 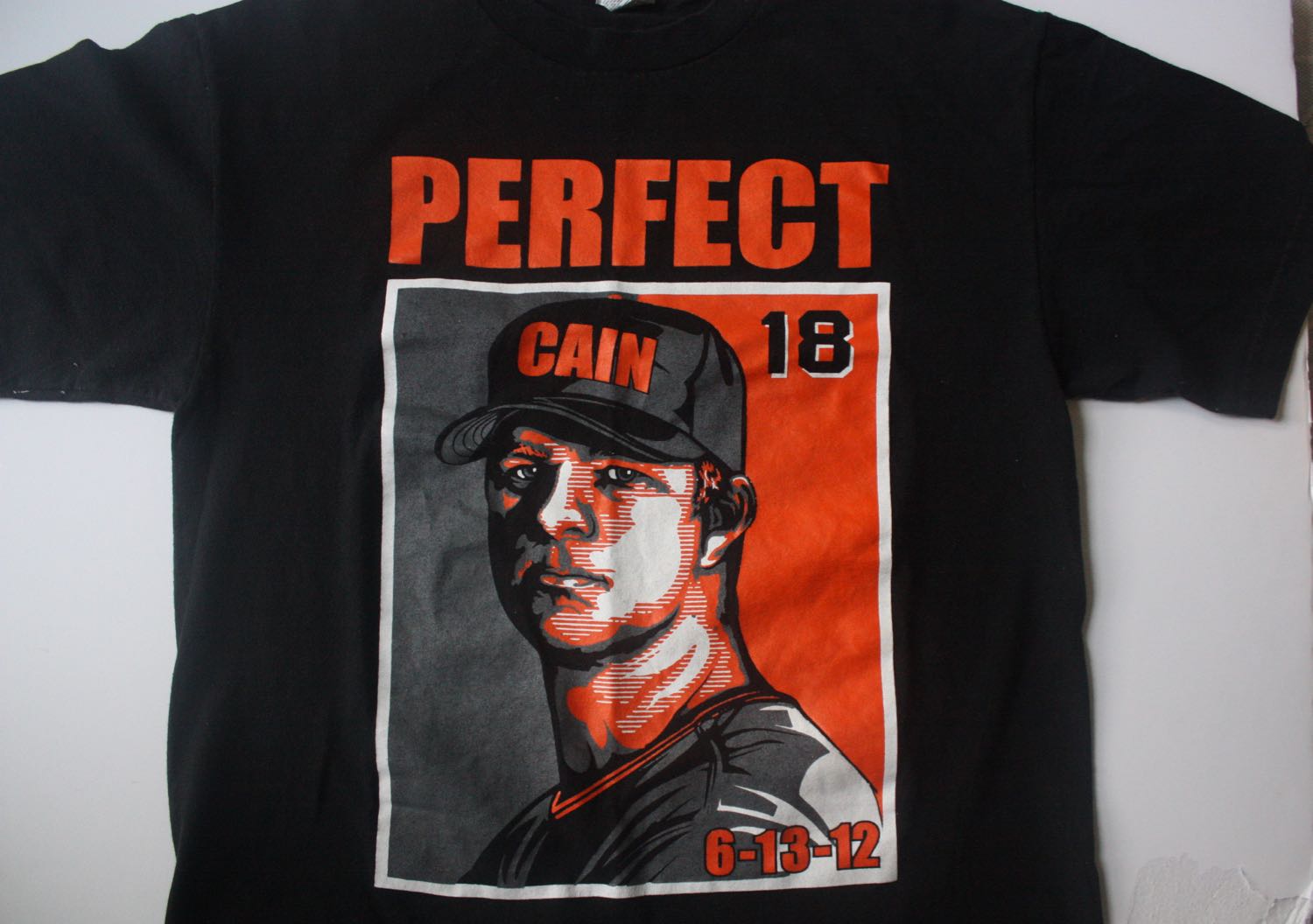 Baseball is iconic by its very nature: the lonely pitcher hero on the plate with the weight of the entire game on his shoulders, facing down the other team’s mightiest batter… Or the desperate outfielder who rockets into the air to catch that fly ball that’s streaking for the fence, and thus wins his team the victory.

Baseball breeds iconic heroes like cats shed hair: constantly. That’s why movies about baseball are always better than movies about football.  And this particular icon, San Francisco Giants pitcher Matt Cain, pitched the Giants’ first-ever perfect game, one of only 22 in the history of major league ball.  Twenty-seven at-bats, 14 strike-outs, and no hits, no walks, no errors.  Nothing. Nobody ever got off home plate.

To the dedicated fan, a striking t-shirt in Obama HOPE style is exactly Matt Cain deserves.  And it’s a doozy. 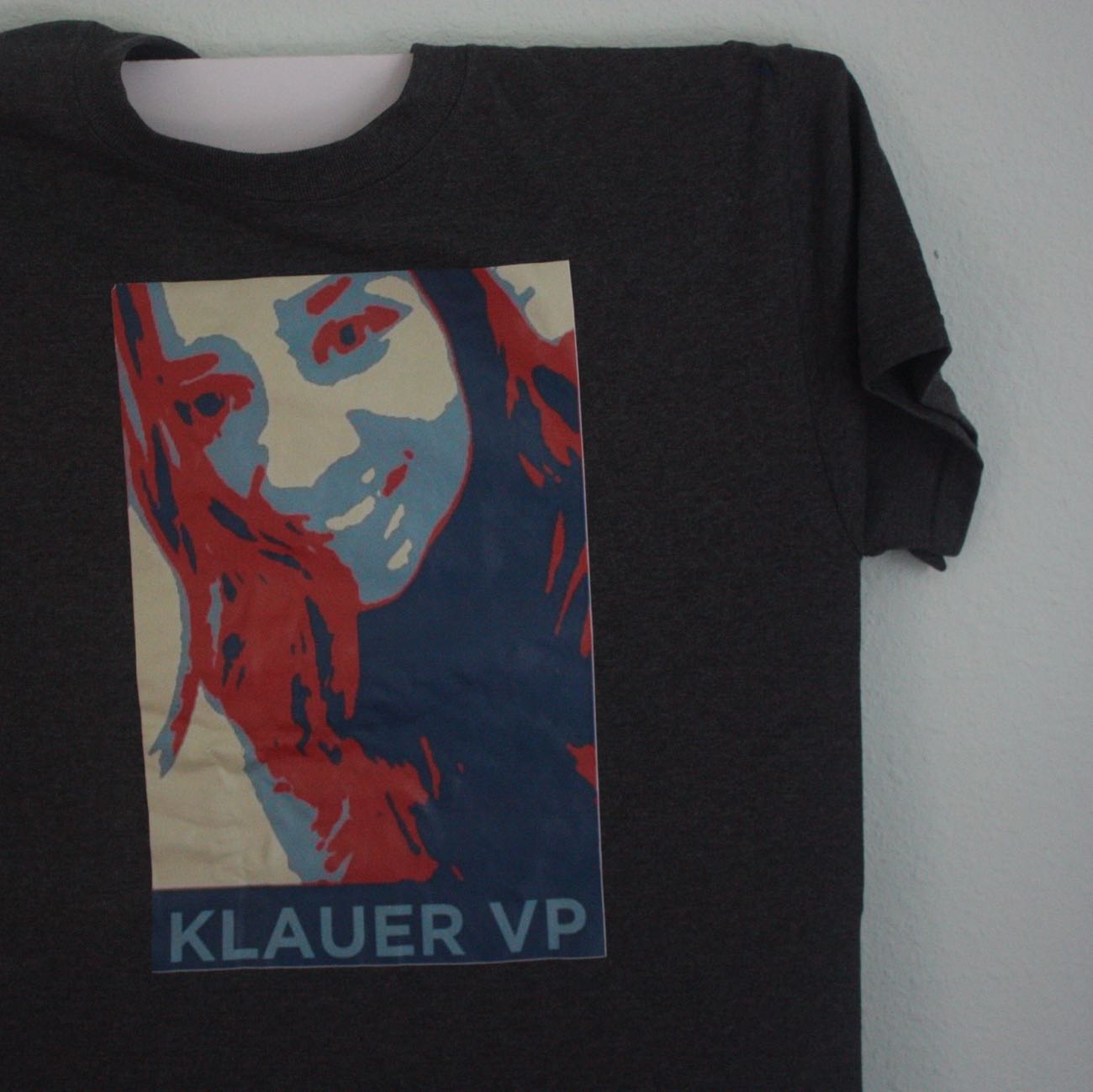 The HOPE icon became so popular that free HOPE photo generator sites arose. They make any photo you submitted into a HOPE-style image with matching pithy message in bold type.

As shown above you rarely get a good image from these things;  but they’re free, and there you are.  This young woman apparently made vice president at her place of employment, and somebody thought the feat deserved a heroic t-shirt.  Who knows? Maybe it did. 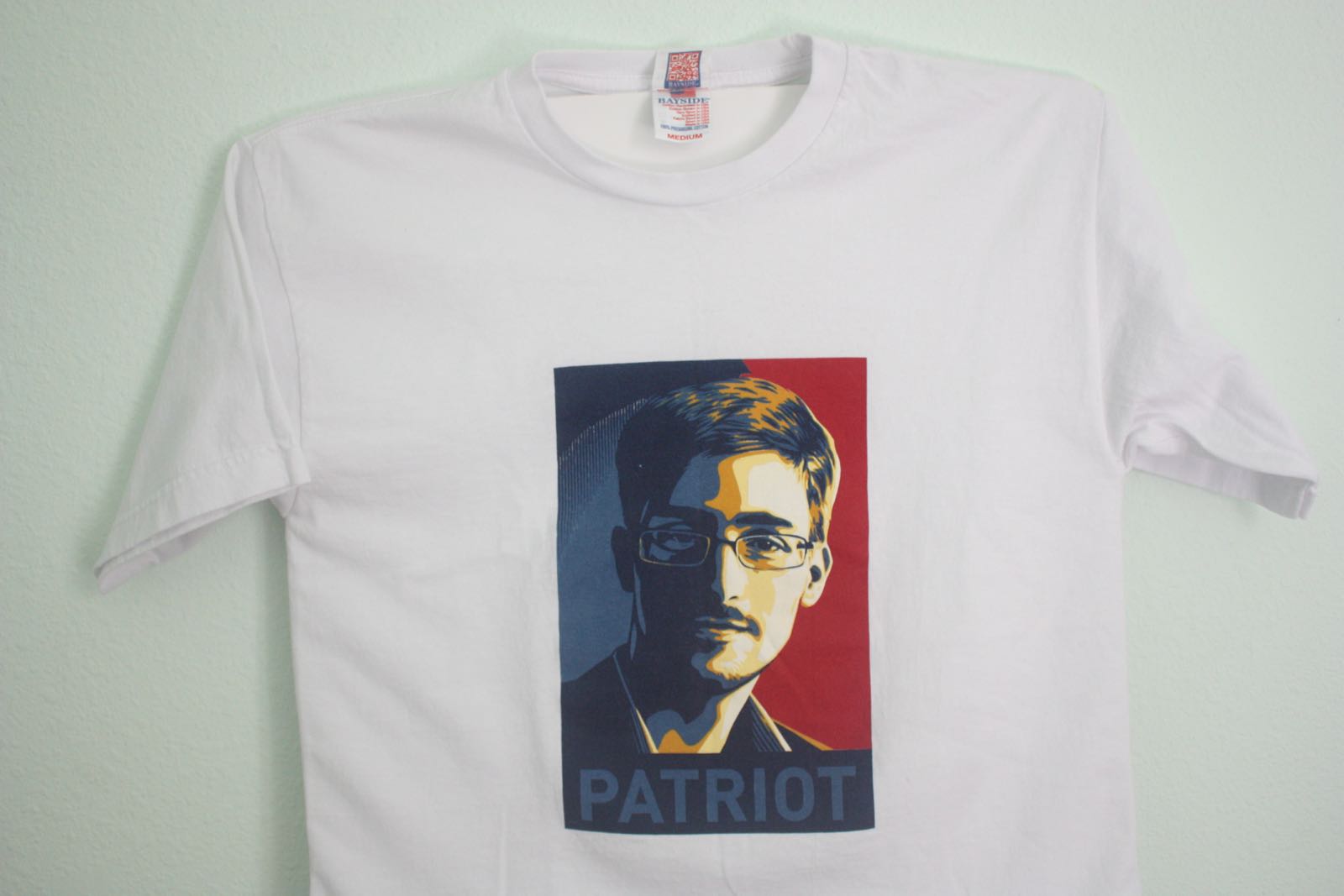 This HOPE tee variant is my favorite, and not just because it’s so well done.  The man is Edward Snowden, a disillusioned NSA contractor who decided to show America just how closely the government was surveilling it and how much its privacy was being violated. Illegally

The government wants to put him away for a very, very long time; he maintains something like freedom in very insecure exile in Russia, He refused Obama’s own taunt to come home and “face the music,” because he would not be allowed to make his case to the public for “national security reasons.”

This tee was produced by the American Civil Liberties Union; the other side reads “Pardon Edward Snowden.”  As president, Obama could have done it, and the ACLU urged him to.  In the wake of Snowden’s revelations, the ACLU was able to take a suit against the government to court and have the National Security Agency’s mass phone surveillance program declared illegal.  Congress even passed a law restricting the NSA’s powers. They never had restrictions before.

I do believe that Obama tried to be a good president.  It was difficult to do anything in the disfunctional political system he inherited.  But Fairey, the creator of the HOPE poster, eventually expressed disappointment in him for setting his sights too low.  For staying inside the boundaries set for him.

Obama had no interest — or perhaps not the power — in bucking the American security industry and the military-industrial complex, and their priorities.  For America, Obama did achieve HOPE, at least at first.  CHANGE? Not so much as to truly challenge America’s most powerful.

But the iconic HOPE style?  I think that’s with us for awhile.  Icons, used properly, can be a good thing. As is hope.