July 3 was a national holiday, and a Friday. We’re a tourist town here, and a college town as well.  So a lot of people were out and about that night.  Not that Friday night is ever dull here.

Rhumba and I don’t travel much, but life in Santa Cruz provides experiences that some people go to Bali for.  We always pack cameras to record what we see. Rhumba’s quite the quick hand with a pocket cam. She takes photos to draw from, and also for the hell of it.  I’m also  big on the hell of it.

That night, Rhumba and I went down to the city museum. On the first Friday of every month, the museum functions as a large, semi-educational (and free) nightclub. 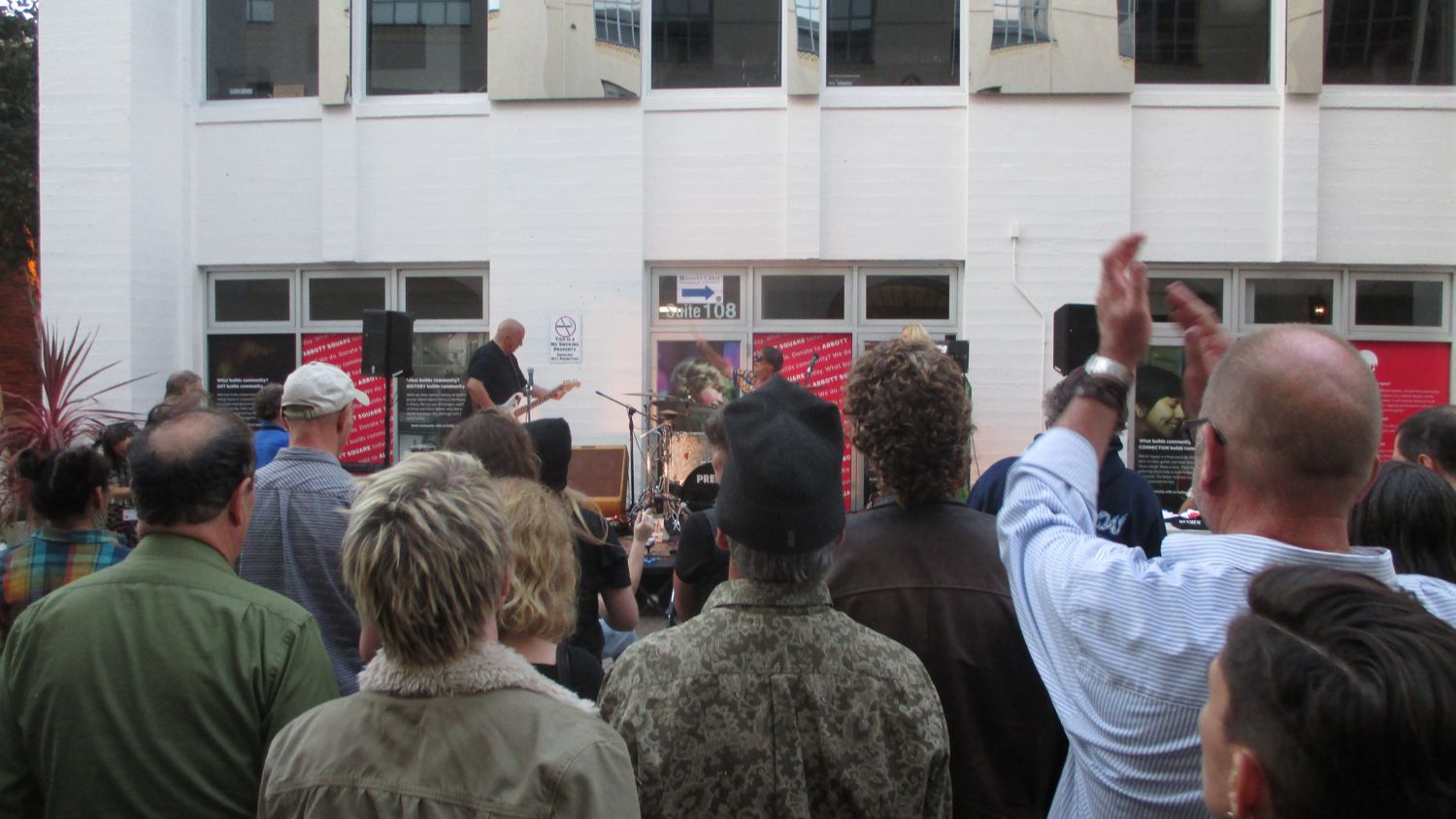 Well-aged surf rockers performed in the twilight for a more-or-less elderly crowd of groupies and surfers and local culturati outside the museum. You’re never too old to relive your youth. In fact, it gets easier.  Down in front! 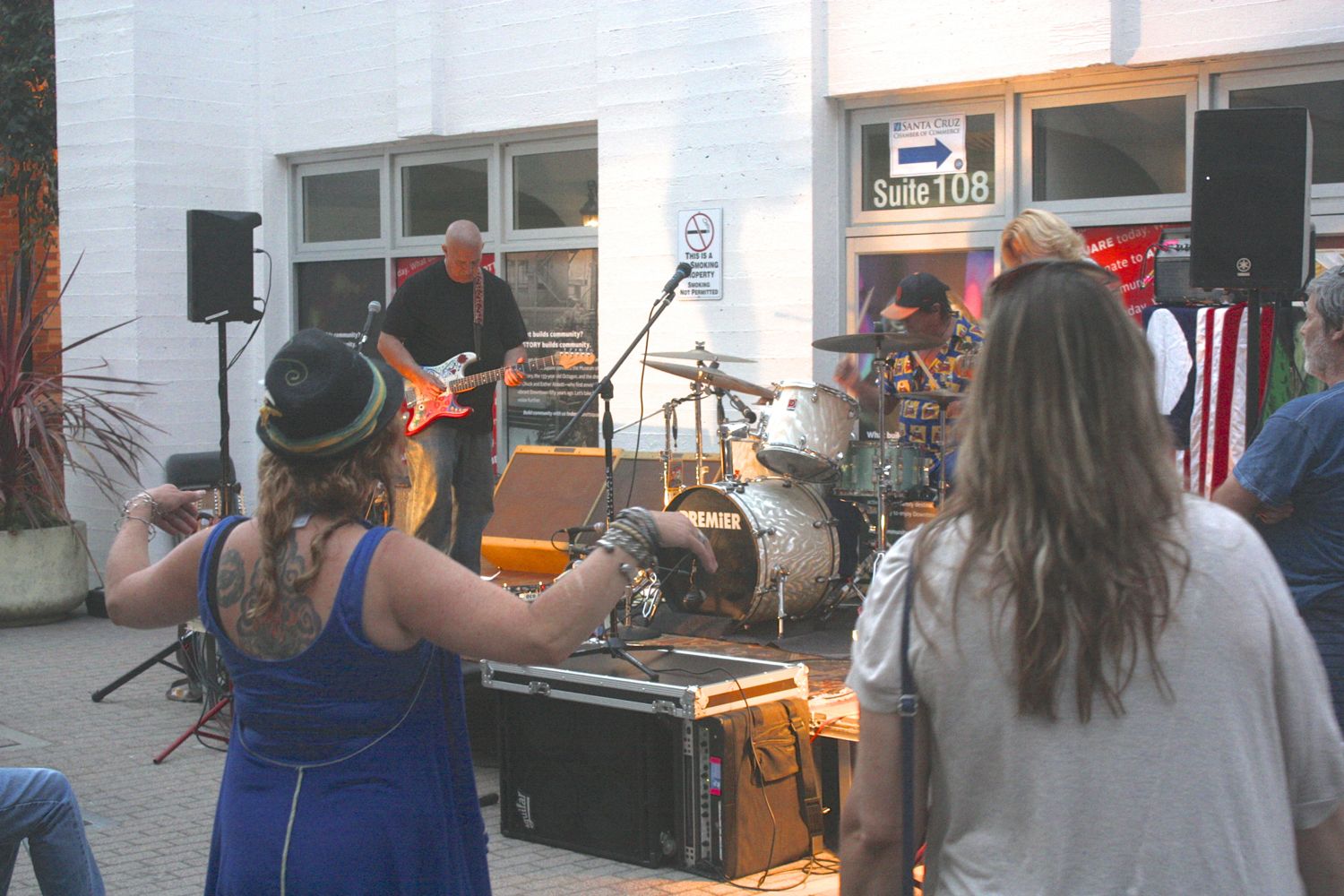 The concert celebrated the museum’s new exhibit: the very first two surfboards built and surfed upon in America — in fact, in Santa Cruz by visiting Hawaiian princes in 1885.  It’s a distinction of some sort, if your town is full of surfers.  The surfboards were ceremonially ferried to town by a convoy of vintage surf woodies.

Rhumba’s camera snapped away at the geriatrically gyrating crowd, but I was drawn down the street by the thump of drums and the jangle of bells.  It sounded like.. Krishnas. 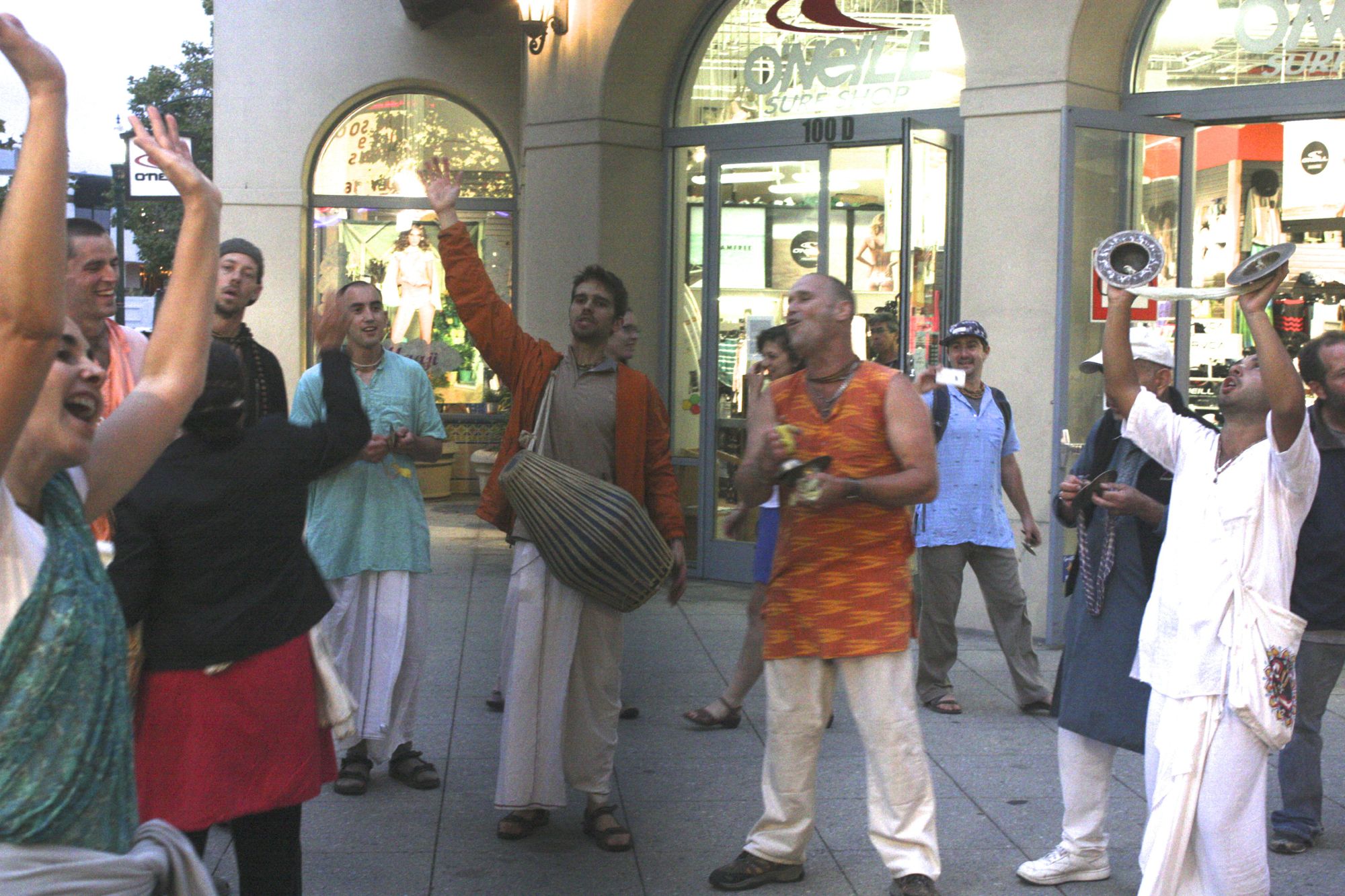 It was indeed Krishnas, dancing and drumming and singing and either having a fine time or simulating one very well.  They have a temple up in the hills. 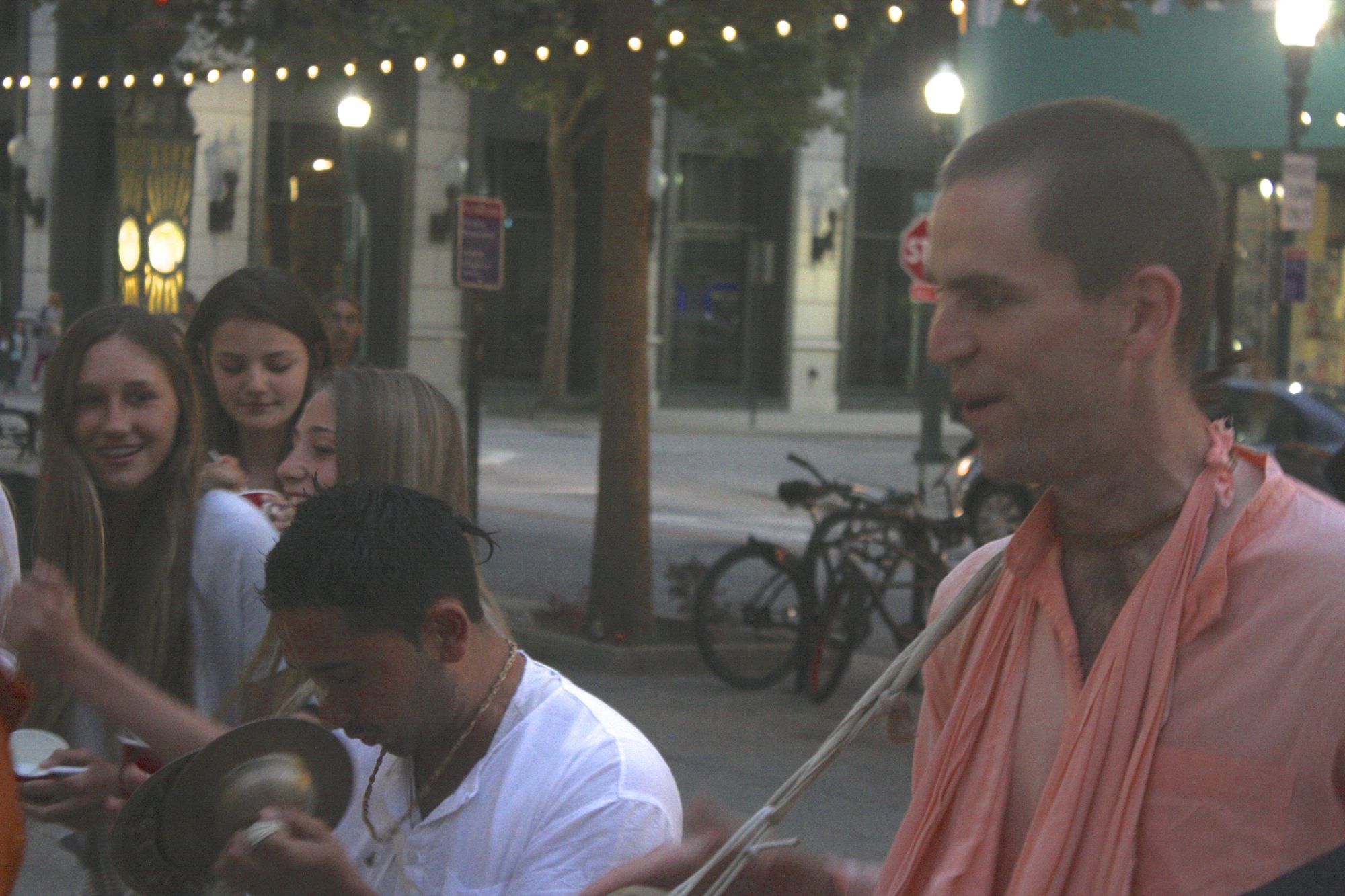 And in no time at all, they were engaged by an inquisitive squad of sub-16 beach babes. The babes immediately got into the spirit of the thing.  Or as far in, at least, as they could without spilling their softie ice cream. 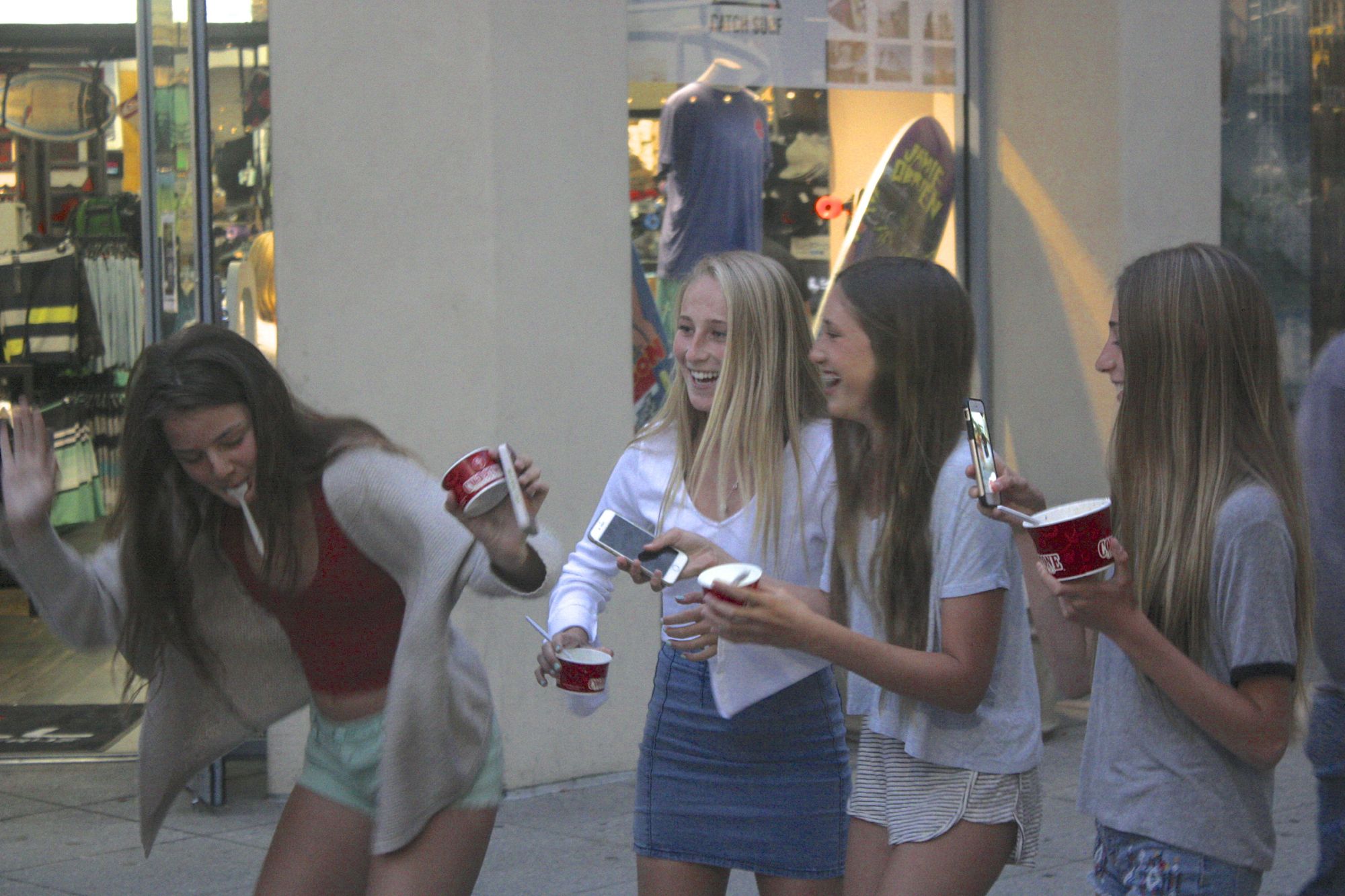 And the sub-16 beach babes and the Krishnas and the surrounding crowd fell to dancing together. 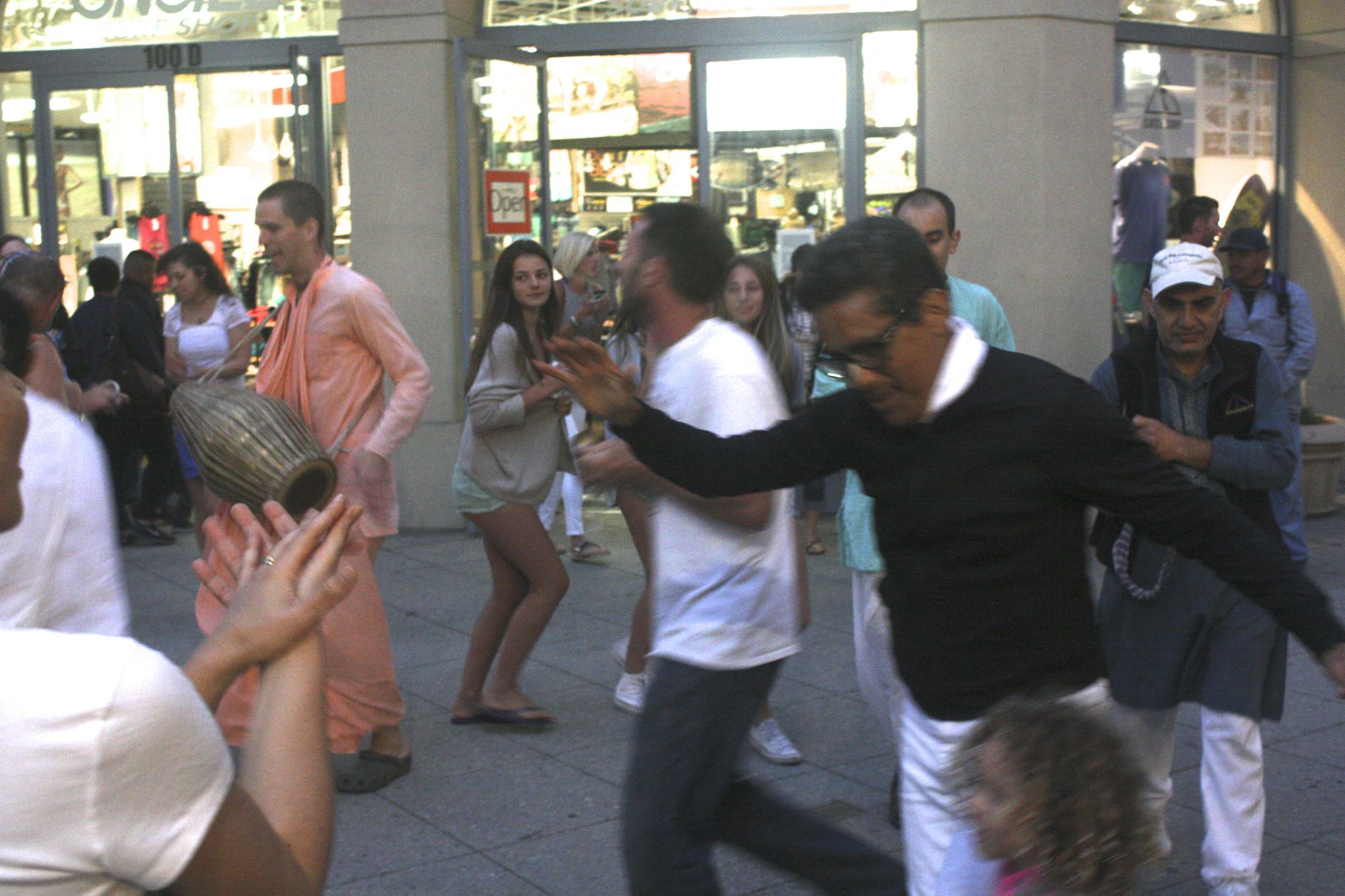 Before long they were joined by a hairy six-foot unicorn in a tartan kilt and his friend the pagan goat god (not shown).  The sub-sixteen beach babes dropped everything: time for a selfie! 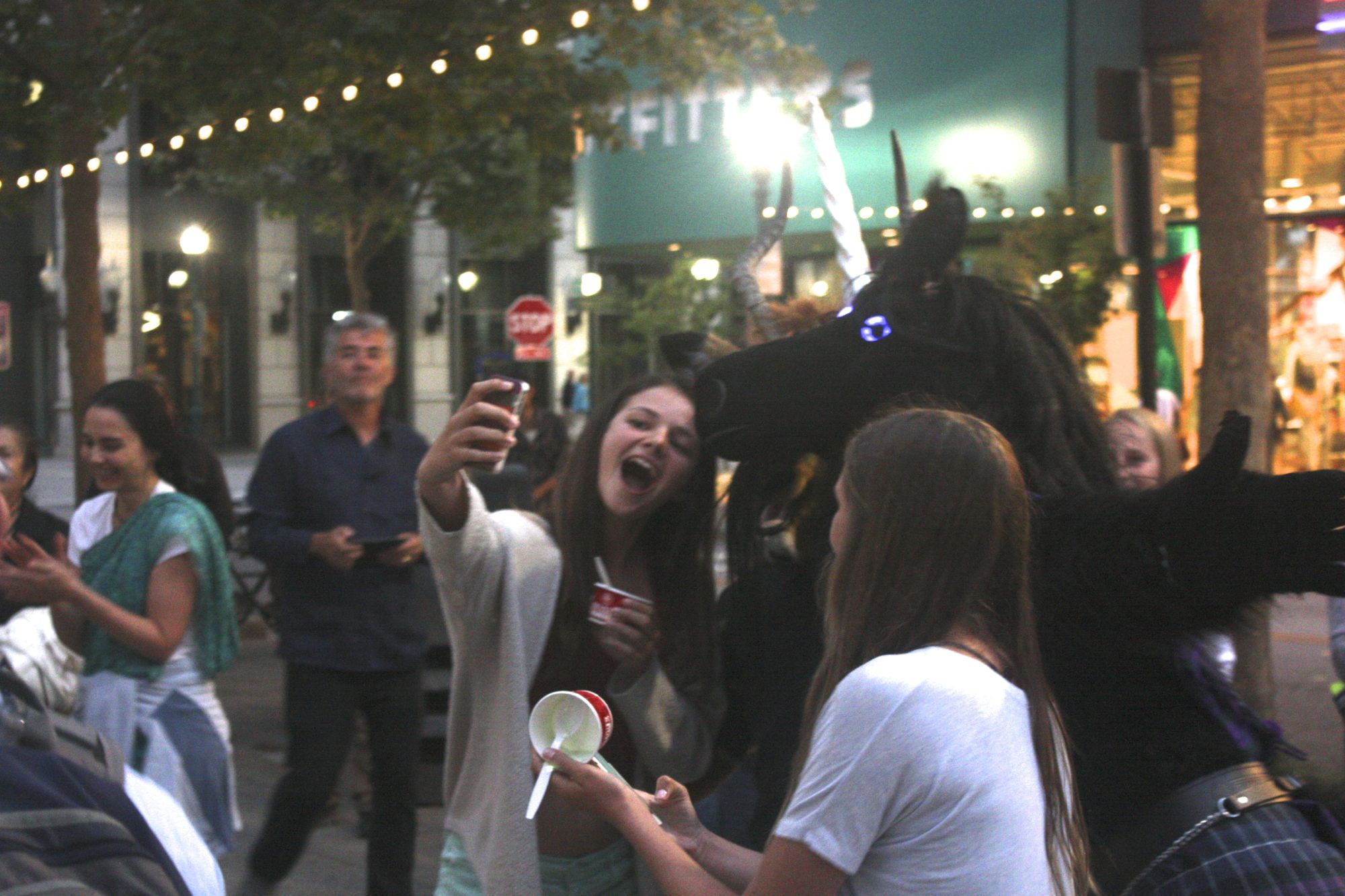 It’s not every day that you get a selfie with a unicorn, much less one with a light-up horn. Here’s one of those questions: can only virgins take unicorn selfies? 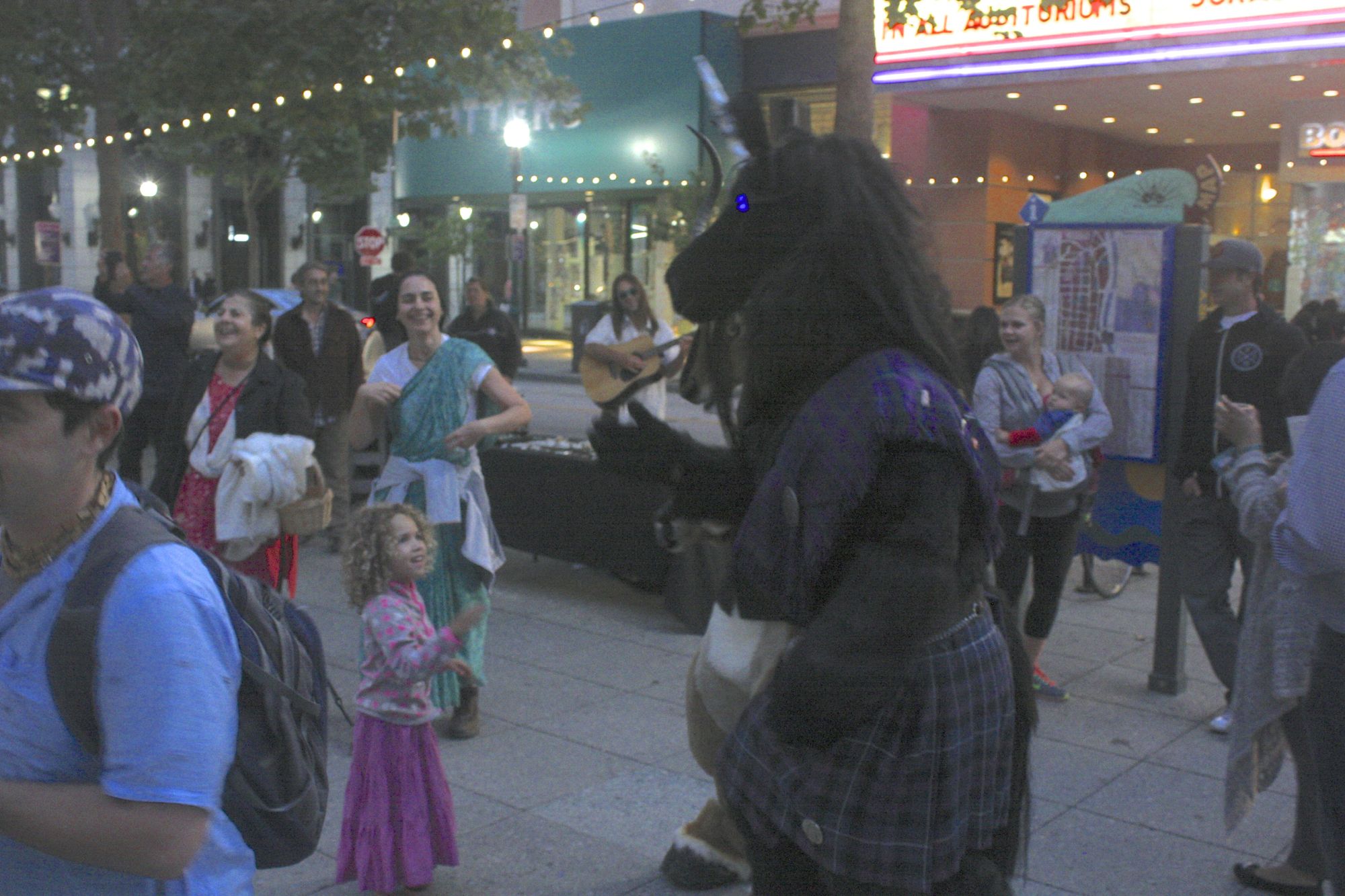 And then the giant furry animals and the sub-18 beach babes and the Krishnas and anyone else who wandered by, danced and drummed far into the night.  Or at least until I lost the light and rejoined Rhumba at at the seasoned citizens’ surf party. 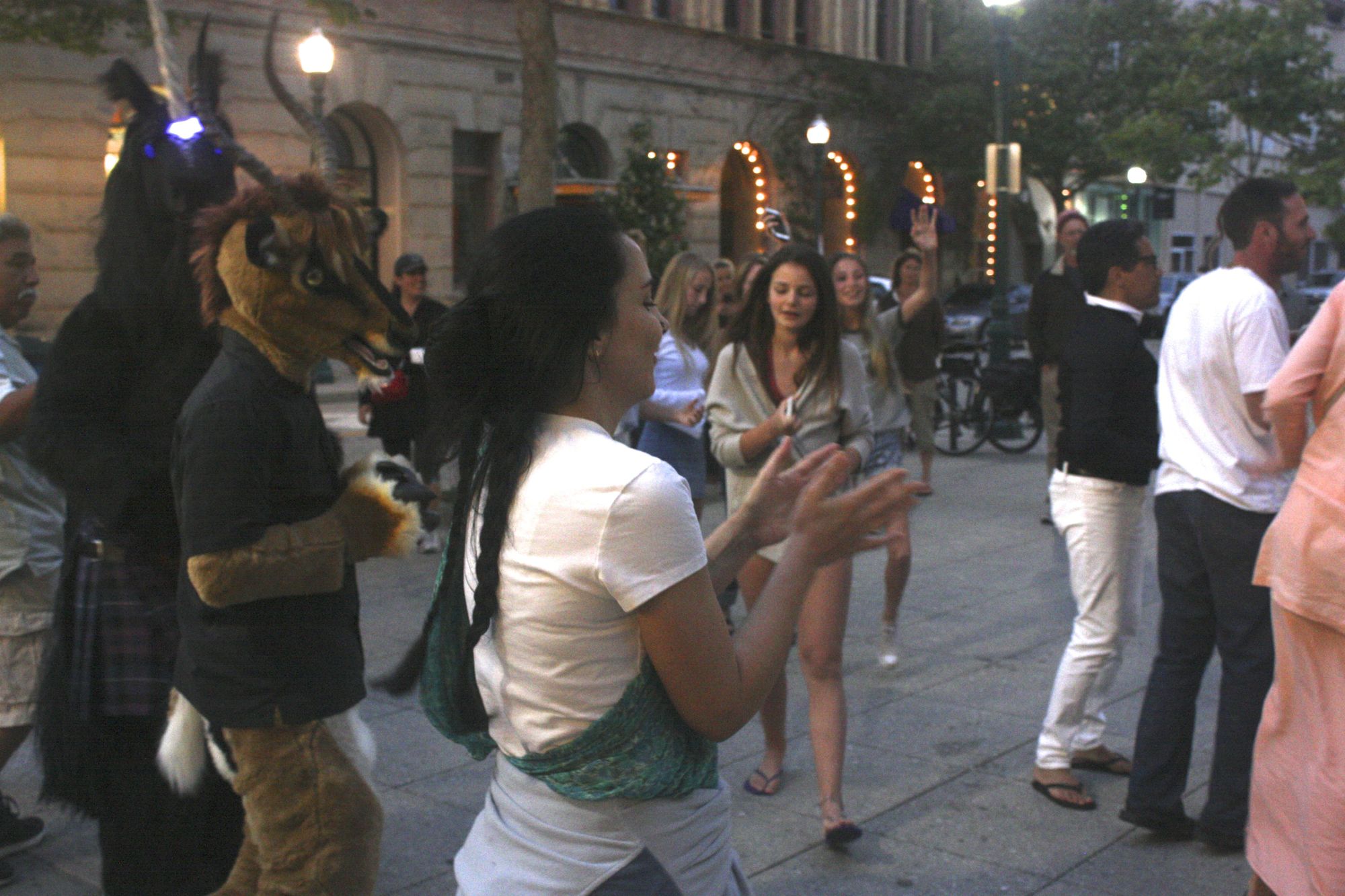 So: how are things in your town? 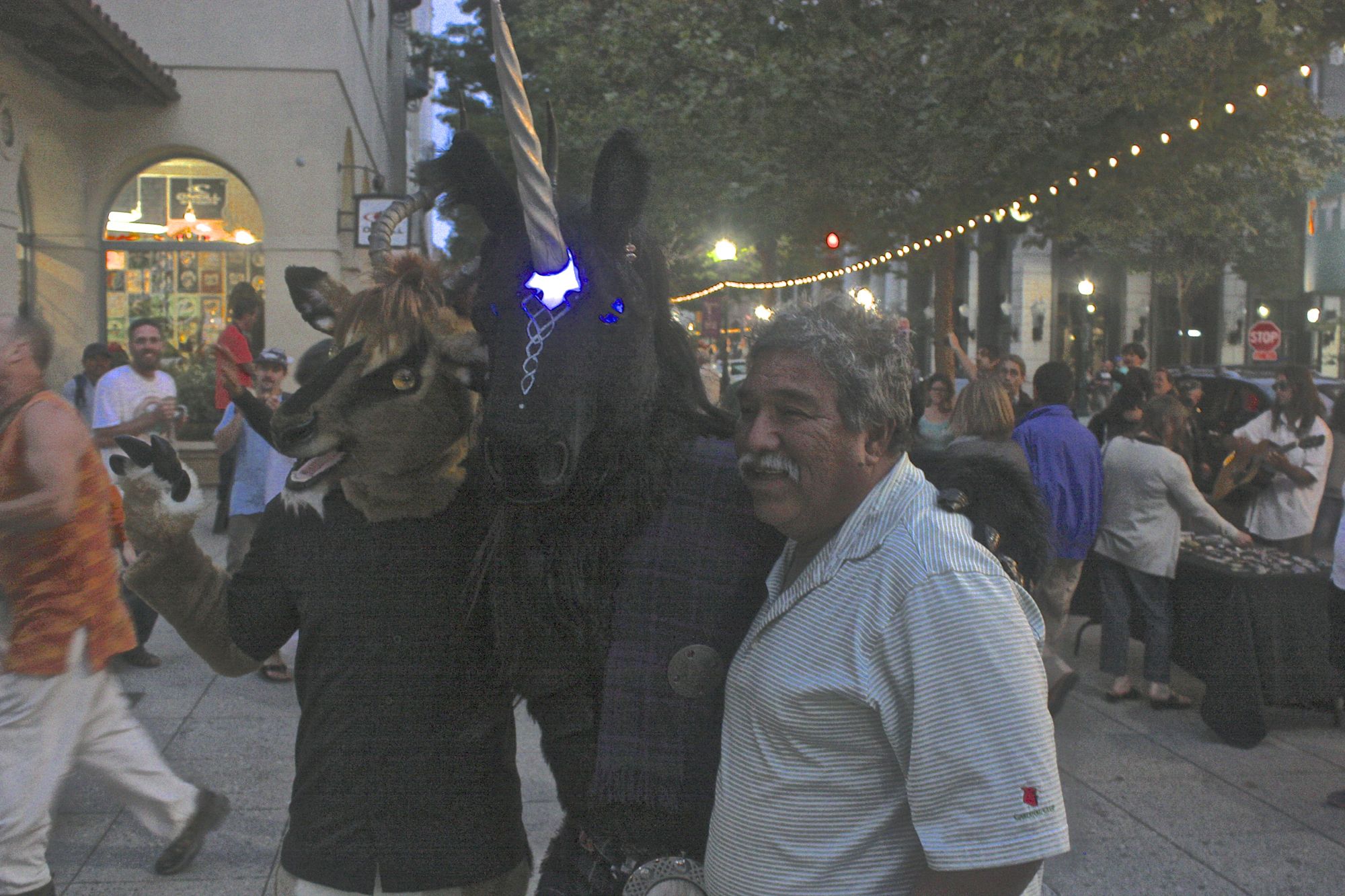