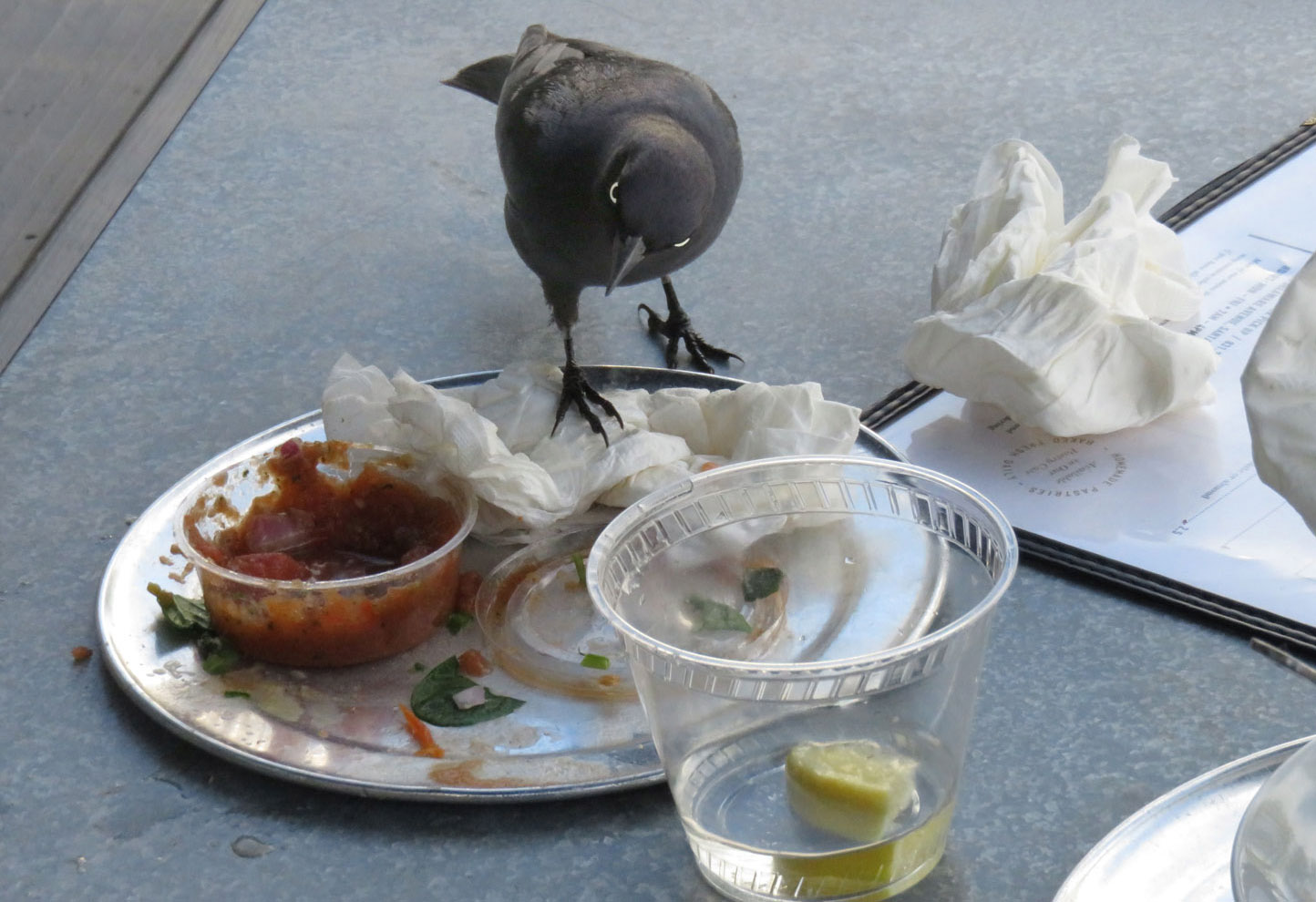 Blackbirds are trouble.  Never more than at a sidewalk bakery, when they swoop down to lay claim to the crumbs on your plate: “You WERE done with that — you know that, don’t you?”

I sometime wonder how nature packaged so much attitude into two ounces of bird.  I’m 1500 times their weight, and do they care?  “Gimme those croissant crumbs, ape, or there’ll be trouble.”

Blackbirds have to be trouble. They are small, and life is hard.  If they were meek, they’d be gone.  So they are not meek. They’ve got a few years to live, if they’re lucky, and they make the most of them.

We have Brewer’s Blackbirds out here — compact, basic-black males with purple highlights, and winsome light-brown females.  If there are crumbs on the ground, you have blackbirds.  If you seed your lawn, or spread wildflower seeds, you’ve erected a buffet for a hundred of them. I’ve been there.

When rain forces the earthworms in your yard to the surface, the blackbirds will pick ’em all off.  If you walk too near their nests, they’ll fly right at you.  Mind you, you’ll only know you’re near a nest when a raging blackbird charges you from 12 o’clock high.  You will flinch, protect your eyes and scalp, and get the hell out of there.  Everybody does.

Anything that threatens their eggs, they attack or try to scare off: humans, jays, crows, even hawks.  I once saw a blackbird chase a rat down the street.  That rat was hoofing it, too.

Brewer’s Blackbirds tend to settle down with one mate, eventually — when you weight two ounces, you need someone to depend on — but they live large.  Outside of mating season, they form dense flocks that twist and turn through the sky like deforming rubber.

Two, three, four hundred of them will land on the power lines and scream their heads off. Then they’ll all take to the air, circle the ‘hood, come back to the lines and scream all over again.  I think they’re dating.

When the pyracantha bushes put out their bright red berries, the blackbirds gorge on them and get blind drunk. Good times.

And they do good for us, too, though mostly we don’t know it.  Brewer’s Blackbirds rarely meet a new insect they wouldn’t eat — immediately.  When the grasshoppers invade, or the weevils or tent caterpillars, Brewer’s Blackbirds are there to slow them down (burp).

All this — and you don’t give a damn about blackbirds.  They’re live in the background, except when they land on your table and try to eat your bread.  You’ve got more important things to think about.

Now: imagine that you’re  like a blackbird — but still human.  You might say, well, I don’t live among creatures 1500 times my size.

But if you make $50K a year, somebody who makes $75 million a year — 1500 times your salary — is a giant compared to you.  That clan of giants almost runs the country; and they’re getting more gigantic every year.  As you have no time for the blackbird that hopped onto your table,  so do they have little thought for you.  You’re in the background. They move, you get out of the way.

Oh, you do good things: pay your taxes (while they don’t); volunteer; give to charity without expecting to see your name on the side of a building; work productively and well to earn your own keep; even serve in the armed forces, or send your kids.

But the giants just don’t see it from their lofty heights.  They own the country — but the people who live in it, and make it run, are not their problem.  It’s an interesting form of blindness that may destroy them — but not without much pain and suffering for us.

That’s why I think that we need to learn from blackbirds.  They don’t sit and wait for the giants to have a change of heart and care about them; if they did, they’d be dead.
They go out every day to make the world a better place for blackbirds.

So be a good blackbird: take care of you, and your flock, and the greater good of all blackbirds. Don’t worry about trouble:  trouble for the giants is justice, life, and freedom for you.  Dodo birds weren’t a lot of trouble; where are they now?