My wife Rhumba and I went to a movie a couple of months back: “Coco,” the latest animated film from Pixar, and the first Pixar flick in a while that isn’t a sequel.  “Coco” is about Mexico and the folklore of the Dia de Muertos.  It’s beautifully conceived and animated, respectful to Mexican traditions and to the Mexican people.

And it’s about 20 minutes too long.  Rhumba dropped off twice.  “You okay?” I asked.  Her eyes were closed. “Oh yeah, it’s a quality picture…. zzzzzzzzzzzzzzzzzz.”  She’s an easy sleeper, but her eyelids drooped not at all for “Wonder Woman” or “The Martian.” Still, it was hard to leave the theater, and “Coco’s” warm and endless Mexican night.

But no worries: we stumbled out of the theater into… a warm Mexican night.  Seventy-five degrees, humid as the tropics. Five hundred miles north of the border.  In late November.  It reminded me of Costa Rica.  Later I’d check the weather forecast for downtown San Jose (Costa Rica), and find it similar.

Rhumba must walk with walking sticks these days. They glow: she wrapped them with strings of multi-colored LED lights, battery-powered. Citizens turned and smiled as she strolled past, and called compliments.

The night was indeed merry. Visitors and locals in lightweight clothing crammed our downtown streets .  Music gusted out through open doors, rose from the street musicians and spiraled up into a black-velvet sky.  Long lines of cars cruised by at walking speed. No one seemed in a hurry.

We were almost, it seemed, in “Coco’s” dark but colorful city of the dead: full of spirits who let no little thing like death ruin a good time. I saw no calaveras, of course, those skeletal spirits of Mexican lore. No bony specters strode down the boulevard or danced to the music as they did in life, and in “Coco.”  But in a way, they’re always with us. And we are always them. 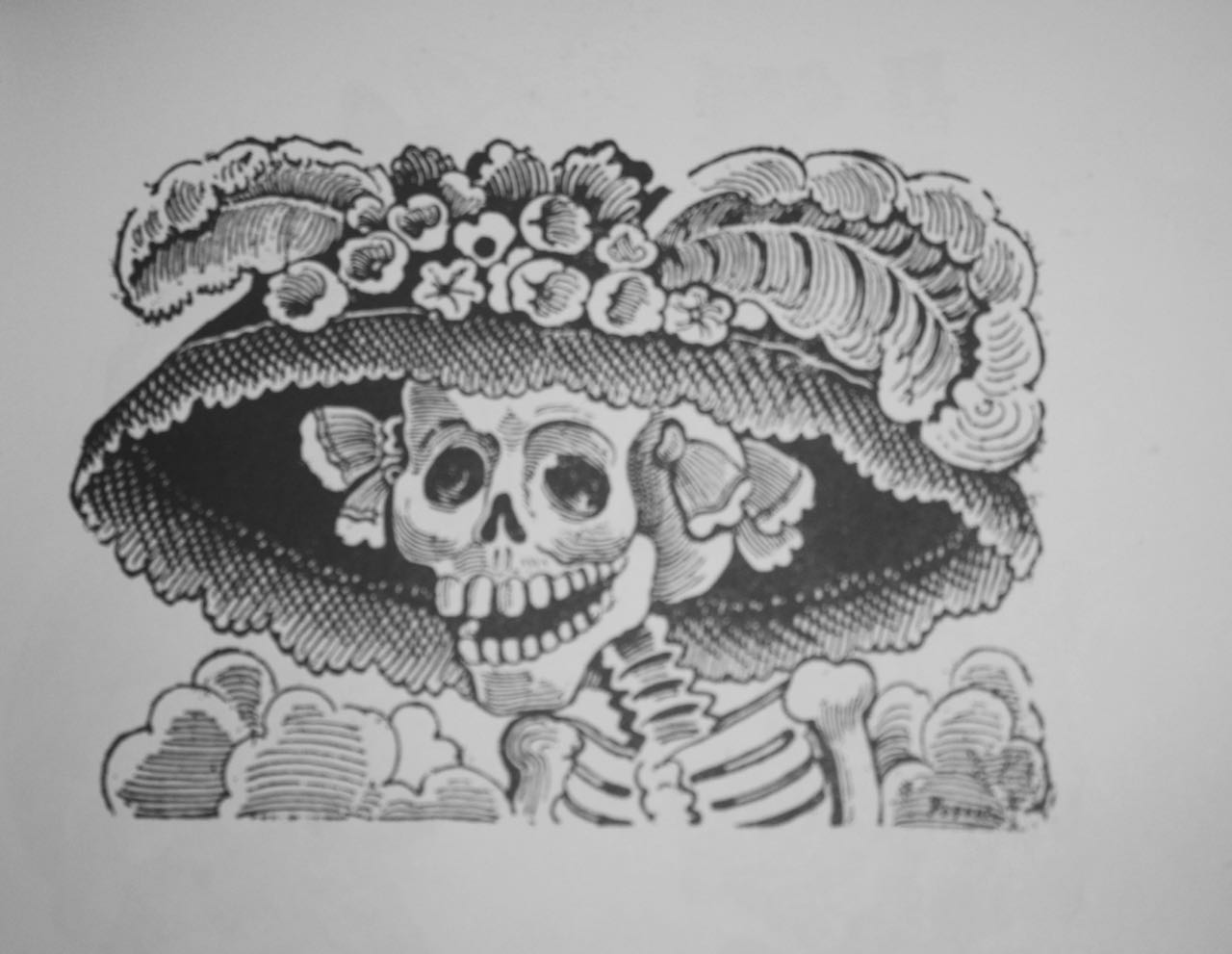 Calavera figures — skeleton figures in wood, maiche, wax, and on paper — are popular around the Dia de Muertos in Mexico, and increasingly in the States. They remind us of who’ve gone on before us. Who never really die, as long as they’re remembered.That’s “Coco’s”  main plot point.

I think about the past around Thanksgiving.  You can’t give thanks without remembrance.  If I built an altar to long-gone friends and relatives, as is common around the Day of the Dead, many would be the calavera figures and drawings: 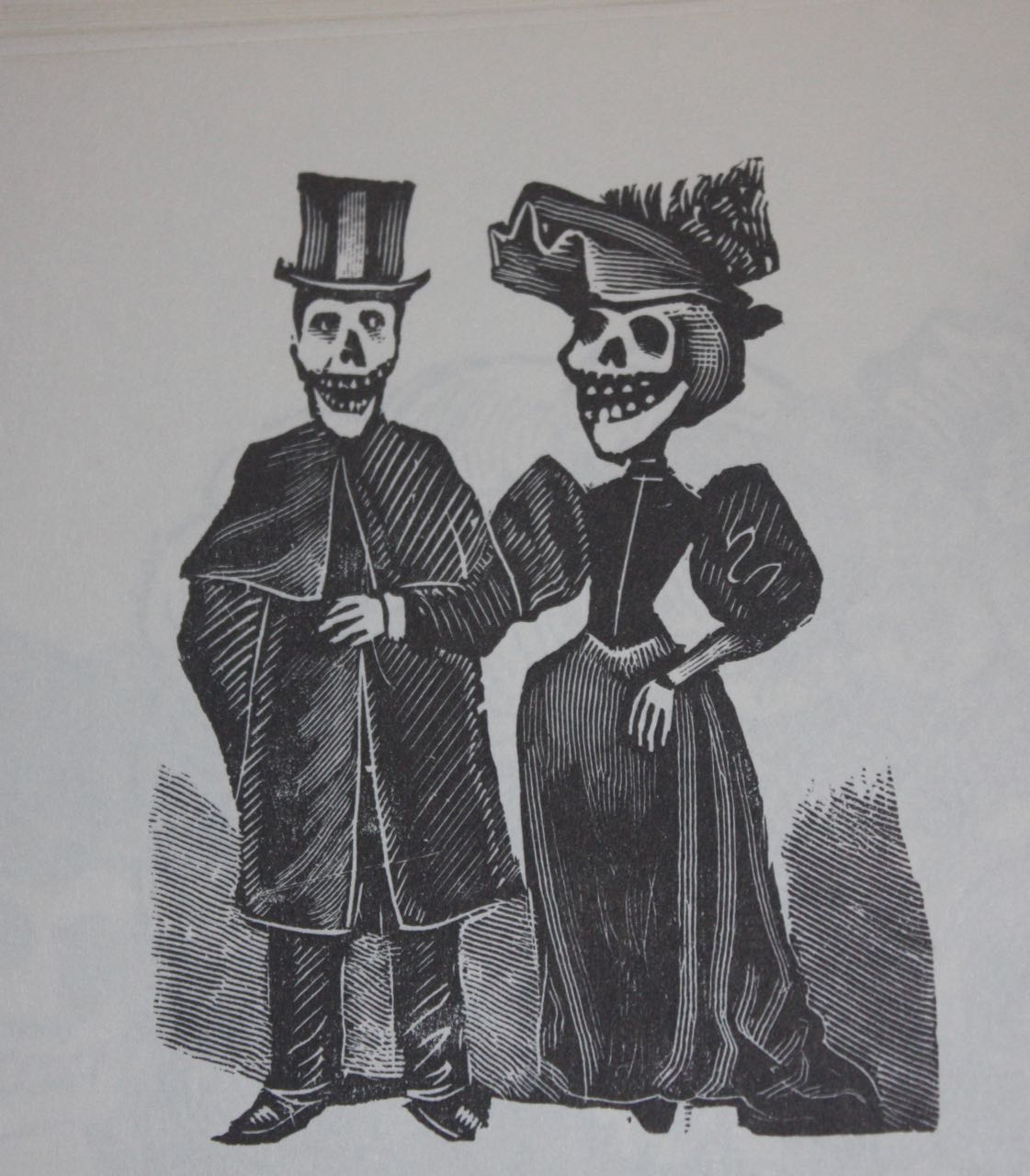 There would be the calavera of a short woman and a tall man, holding hands tightly.  The woman will smile anxiously;  the man is a skeleton that does not smile.  That’s no mean trick; but I’d expect it of him.

Nearby, the calavera of a plump old woman tells dirty jokes in Portuguese and laughs at them herself. A skeleton in a polo shirt holds a bottle of beer in one hand and offers a beer to you from the other.  He stands next to a horseshoe pit. There are tools in his pocket.

Nearby a fat calavera in chef’s whites and a short beard offers food to the living and the dead.  He draws on a joint. The calaveras of long-gone aunts dress a table for Thanksgiving, while my many dead uncles — bonier than in life — puff cigars and pipes until they vanish in the haze. One of them, the drunkest, falls into the horseshoe pit.

Farther back, the calaveras of dead lady friends primp and beckon. Skeletal  co-workers from long-gone companies wander the streets with PC keyboards strapped across their chests like bandoliers. A tweedy calavera, elegantly bearded in silver,  sits at a bar and toasts me with a G&T.

And a hundred others besides. I’m old, I’m old.  I remember too much.  But that’s okay: if you remember long enough, you’ll always find something to smile about. 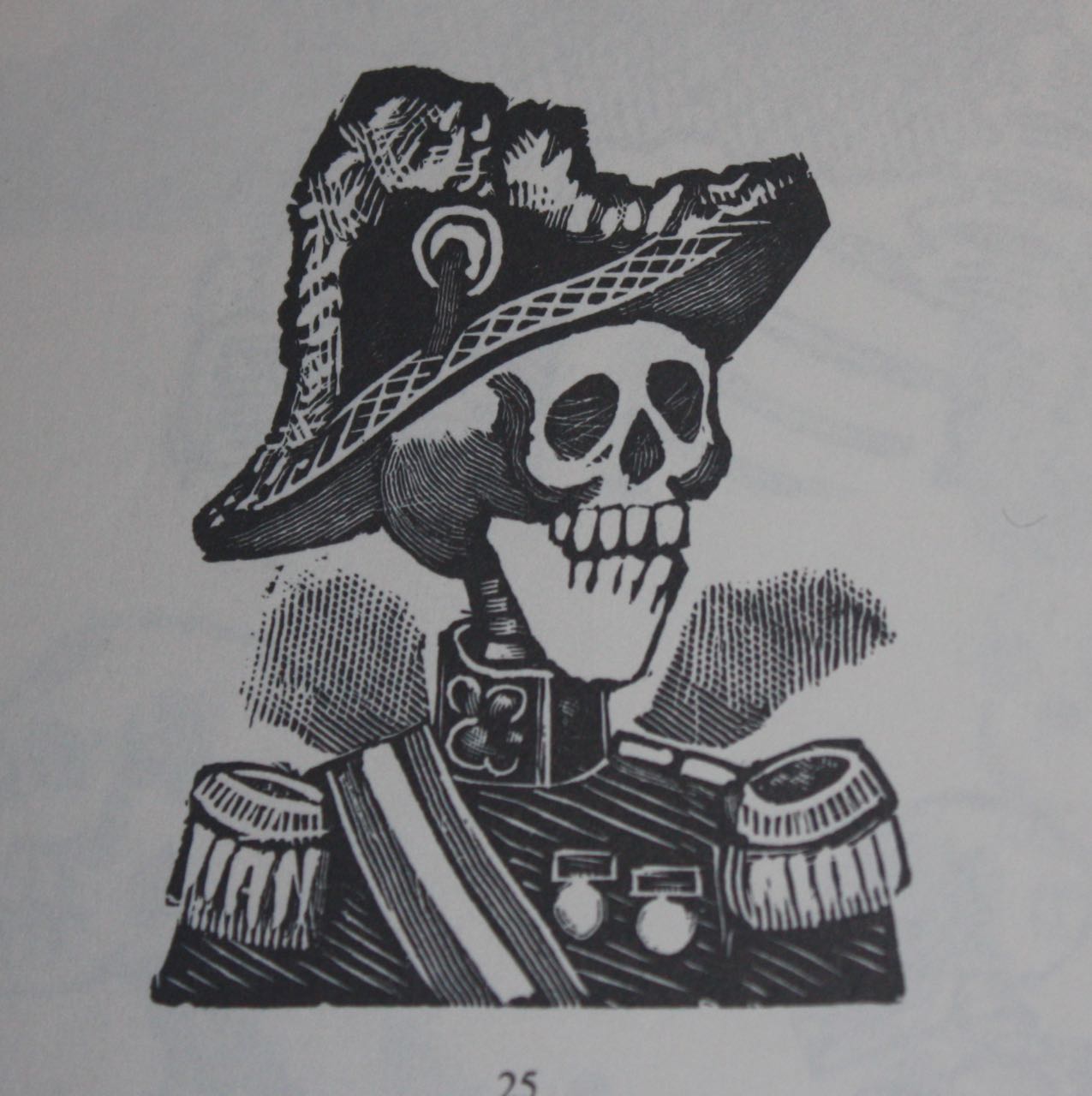 Even death.  What’s death but part of life, to be acknowledged and enjoyed? Mexican culture has a nuanced view of the matter: death is omnipresent and inevitable. But… why not have some fun with it?  Hence the calaveras, in drawings, in sculpture, in candy.  Skulls and bones meant not to intimidate, but to celebrate.  American culture has warmed to this idea. Ask the Grateful Dead, among others.

The master of the calavera was a Mexican lithographer named Jose Guadalupe Posada, active from about the 1870s into the early 20th century.  He produced a flood of engravings for all sorts of popular publications, including cheap broadsides and pamphlets for the masses. 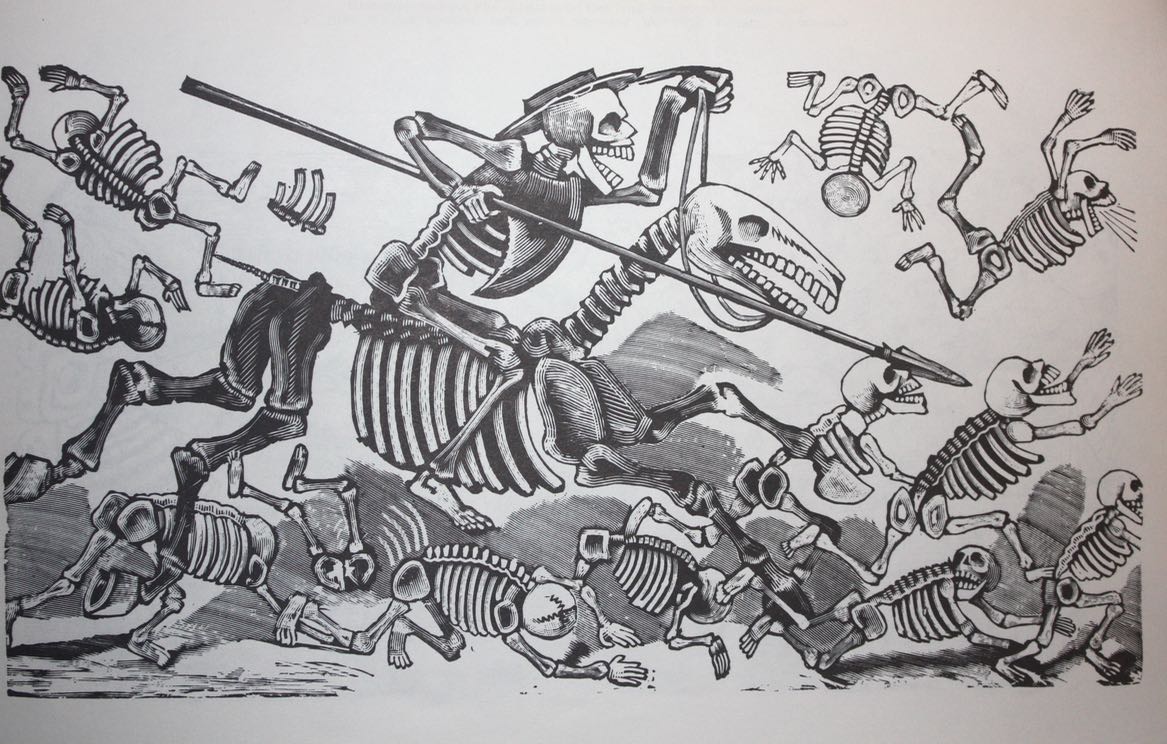 His calaveras were famous: they both celebrated the dead and mocked the pretensions of the living. In the end, Posada’s calaveras said, we are all bones: but that truth makes life no less sweet.  I’ve scattered some of his calaveras through this article: calaveras of the revelers, of the warriors, of the great and exalted and pretentious.  Even of the cats. 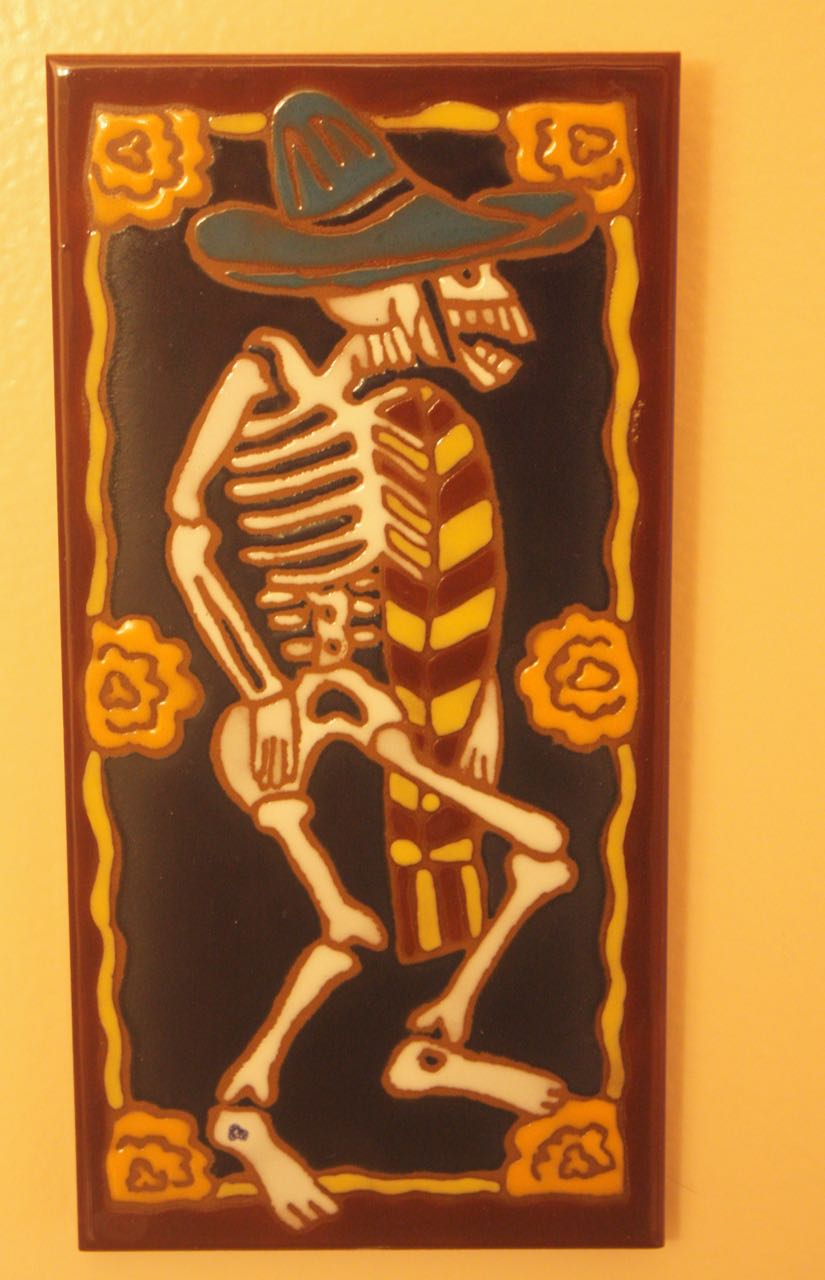 A woman in these parts does wonderful — and affordable — calaveras painted in on ceramic tiles.  Some are original, some not. She offered me one that looked for all the world like — me, as a calavera. At least, I saw it that way.  (A handsome devil, to be sure, long and lanky in a blue hat with a colorful serape, much like the aloha shirts I wear.  And smiling, of course.  I took the painted tile home and hung it on the wall.

Later, the woman offered us more calaveras: my favorite was that of a cat, and again I had to have it.  It is the prettiest skeleton you ever saw.  Like our cat: she’s a cutie, even in her old age.

And kitty’s had a hard year:  three times now she’s clawed at the scratching post of death.  She’s not in the greatest of shape even now, though she’s sitting next to me, purring, as I type this.  The next week or two are… uncertain. 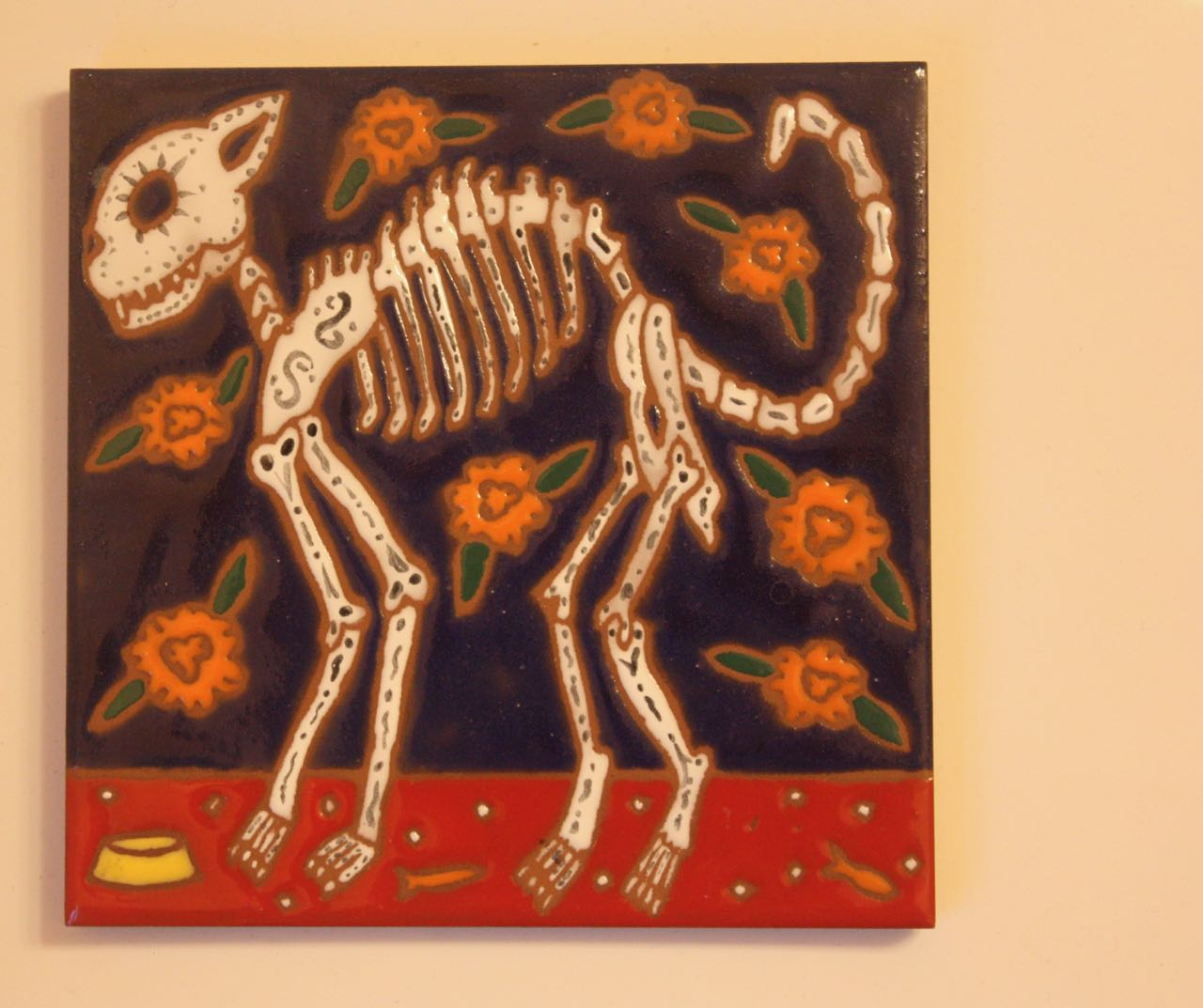 Perhaps for that reason, I’ve not put her calavera on the wall.  I might mount my own calavera while I’m alive, for my own amusement. But not someone else’s, not even a cat’s.  Not until it’s time.

She will probably be our last cat. As Rhumba and I age, taking care of only ourselves will be more than enough work. And so when our cat passes, the calavera will go on the wall to honor her, and also all the other good old cats who’ve come and gone from our lives but not from our fond memories.

And then I will put up one more calavera on the wall:  one of her and I together, or seemingly so.  The artist even got my shirt right. 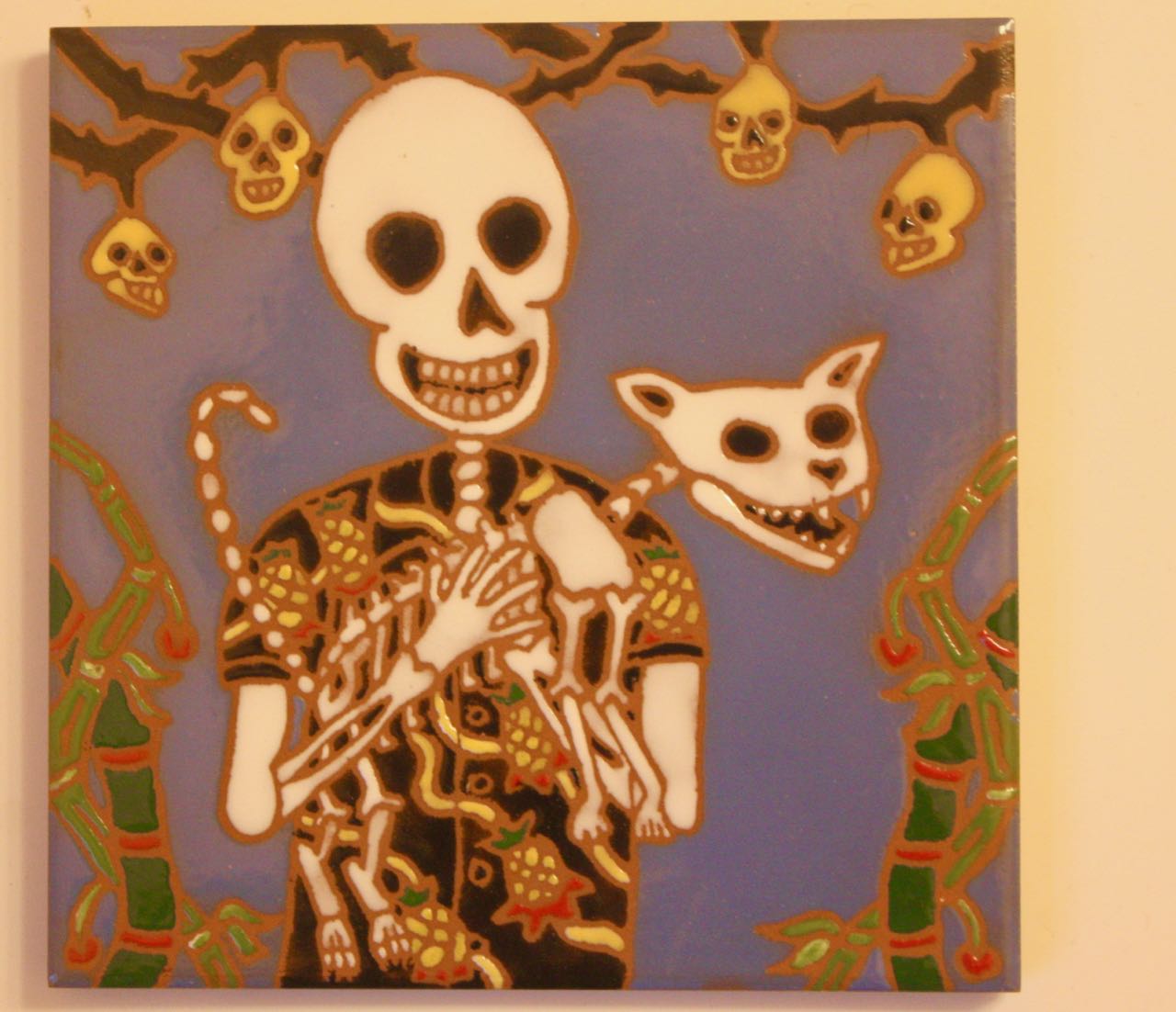 Remembrance: it keeps the past alive, and the present more precious.

2 thoughts on “Send in the Calaveras”