I like almost everything about the fitness center at University. I like the stylish two-story building: something like an Art Moderne airplane hangar. I like the stupendous view of the bay from the floor-to-ceiling windows on the second floor. I like the weights and equipment, and that everything’s clean and in good shape. 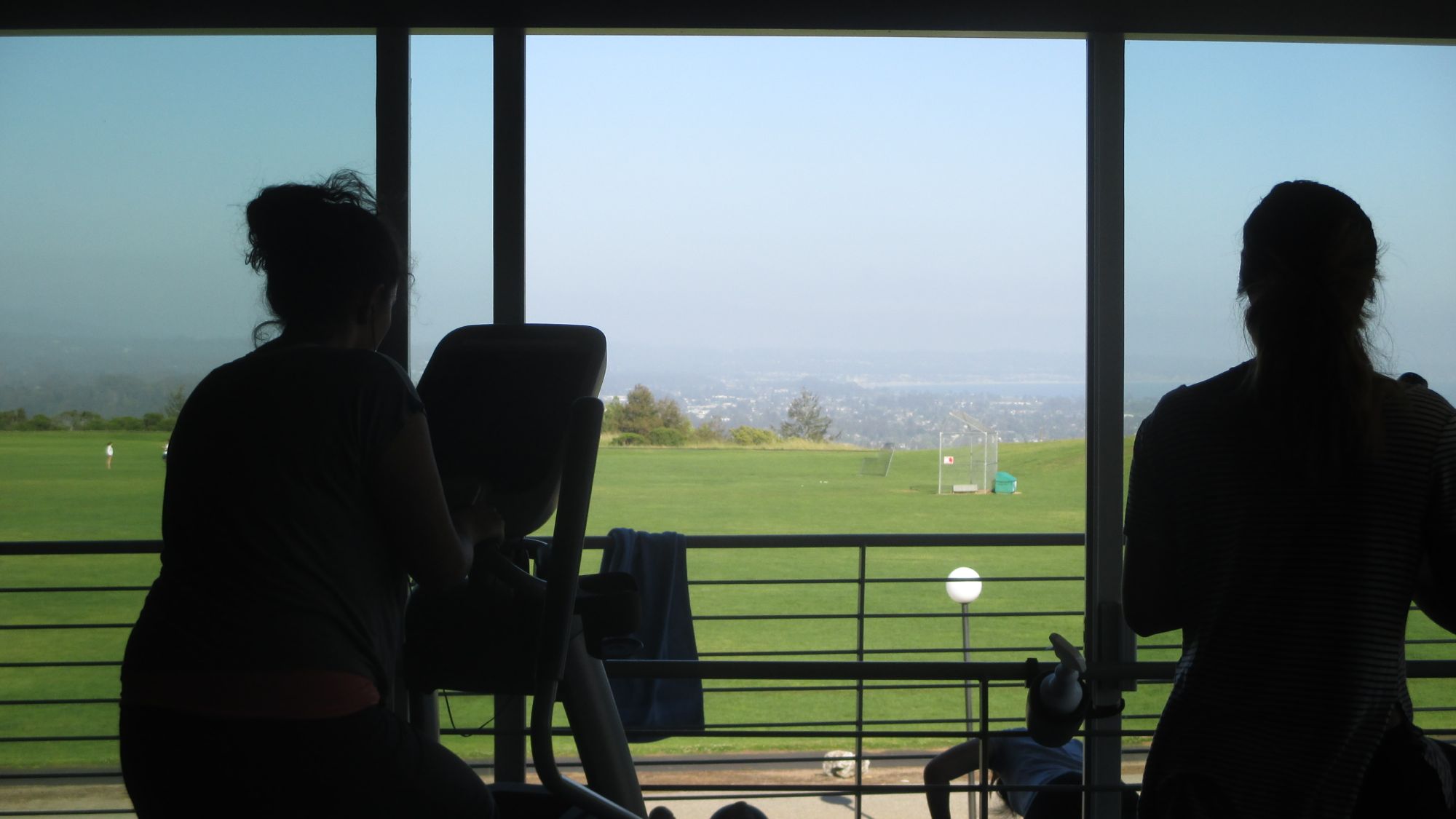 I even like the students who work out alongside me. Many are athletes, so they’re serious about training and hardly ever whip out an iPhone between sets. And I really like the price and availability: twenty bucks a month, and I can walk over from the office on my lunch hour.

What I don’t like? It’s too small, half the size it should be for a campus of 17,000. I have to step over and around grunting, wiggling bodies to even get a dumbbell much less find a free bench-press or squat station. I took the pictures in this post at 5 pm this evening. How busy is your gym at 5 pm on a Saturday night? 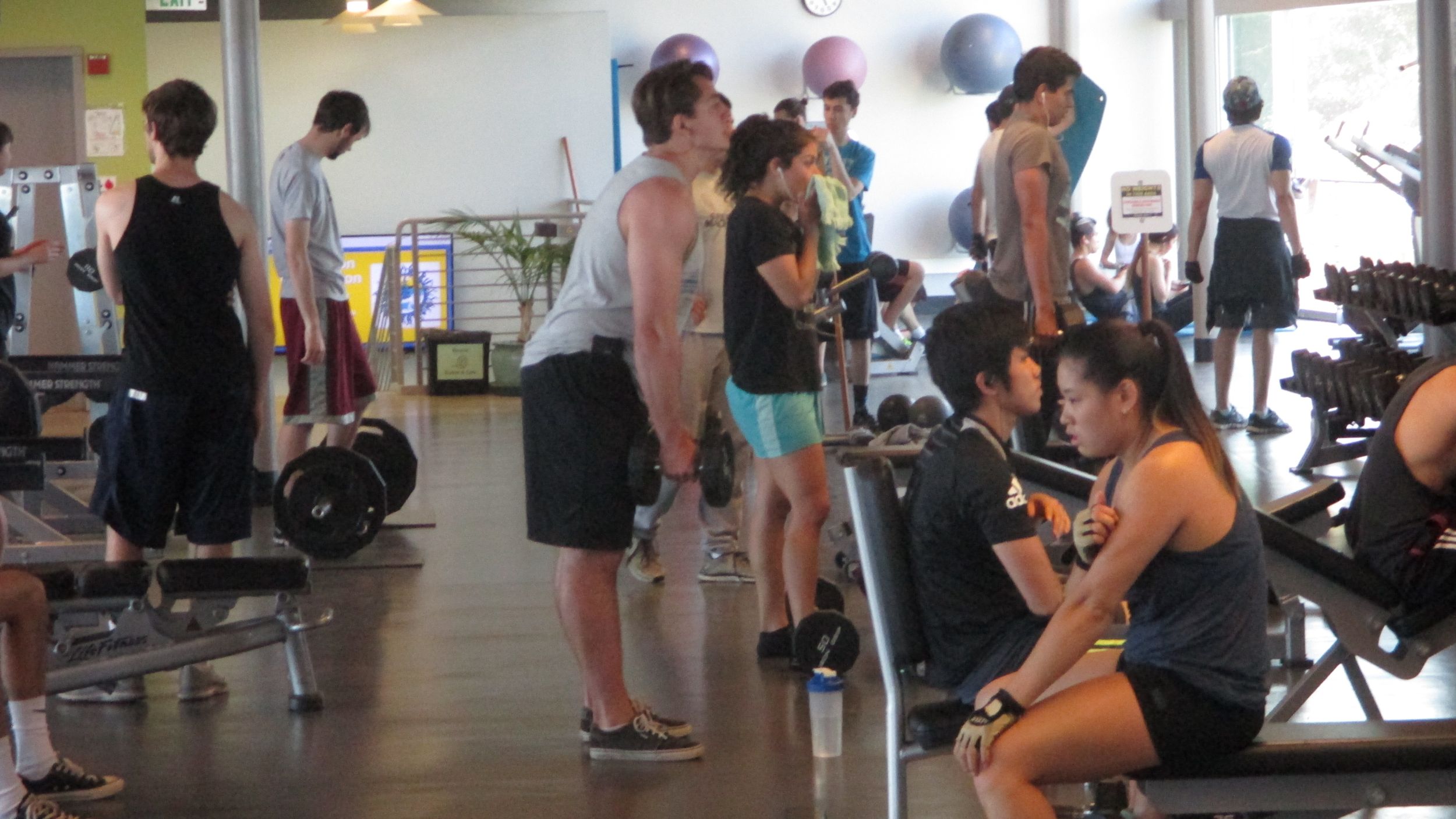 I’m old: just fighting a rear-guard action against the mercilesss insults of time. So, given the crowds, I just do whatever kind of workout I can manage: grab a pair of dumbbells and do some impromptu shoulder presses in an empty patch of floor. Or, do progressive lunges down the center aisle while the kids stream past me in search of workout stations or cardio machines. 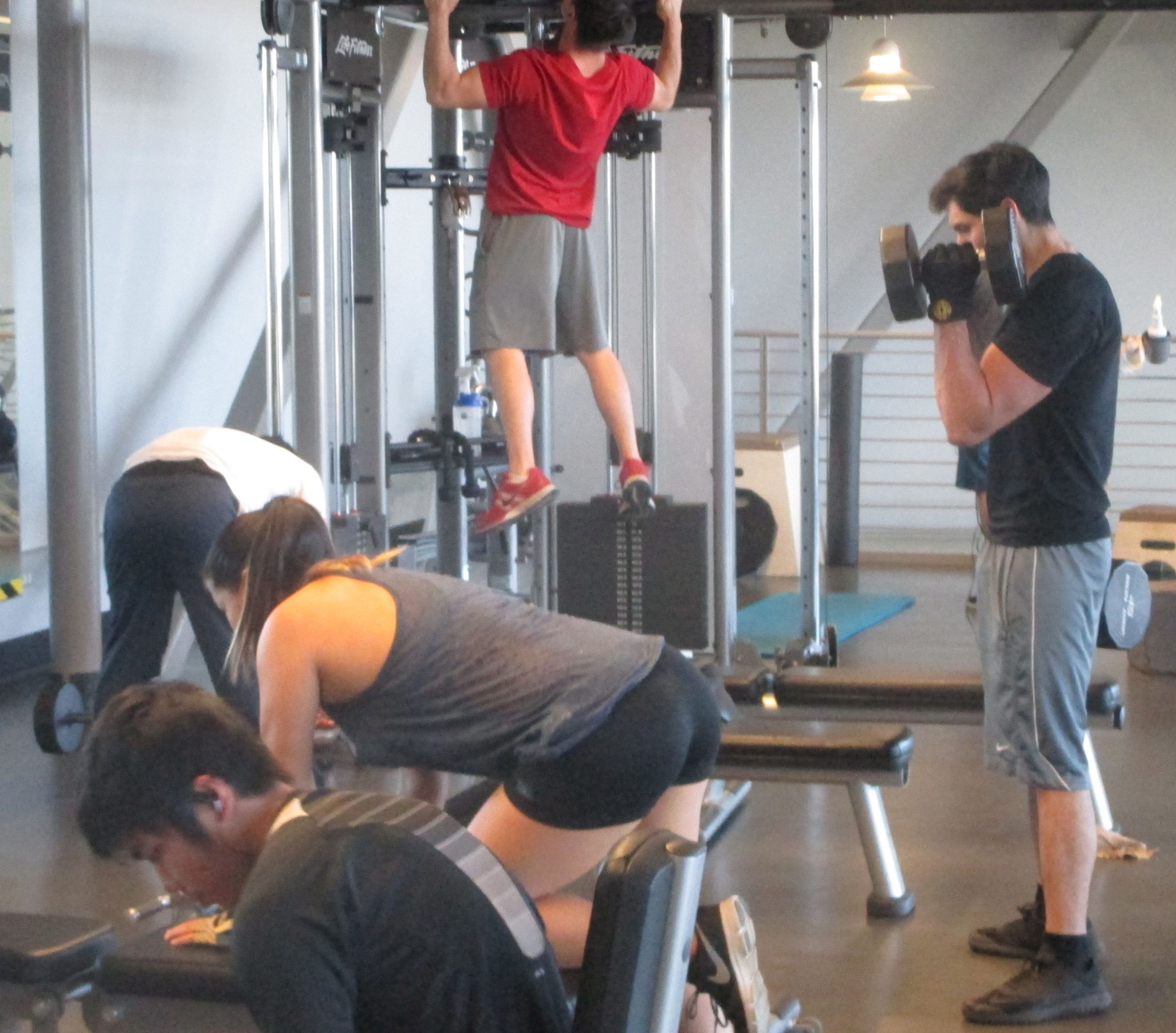 The fitness center wasn’t big enough when it was built, 15 years ago. Since then, enrollment grew 50 percent. The administration hoped money for expansion would appear. Never happened. It’s been a rough 15 years in California.

And a rough 15 years to work for University, what with budget cuts and staff cuts and ever-increasing work. I’ve been there for nine; feels like 20.

This was on my mind as I stumbled back to my office from a noon workout last week. My route took me through Quarry Plaza, which was a circus of political advocates and frat boys and student clubs, all handing out leaflets or seeking recruits.

A couple of brash young anti-abortion advocates had come up from town with a six-foot color poster of an aborted fetus. It was meant to be shocking; it looked like a barbecued chicken. I pushed my way through the swirl of argument and commotion that they’d made. It was hot. I was tired. I’d just got free when somebody shoved a clipboard in my face .”Sign this. It’s for the kids.”

“Which ones?” I asked wearily. His partner showed me some literature. It was an petition to float a ballot initiative for school construction bonds. Three billion for the public schools, two billion for the universities, another chunk for the community colleges. Something for everybody. At a cost to the general fund of a mere $500 million a year for a very, very long time. But hey: University might get a better fitness center out of it. Win-win, right?

Forty years ago I would have thought so. Now, I see the problems.

Ballot initiatives used to be a sort of grass-roots legislation, where citizens could vote something into law that the legislature refused to deal with. But now special interests just use it as a way to bypass the governing process. If you’ve got the money you can take your proposition straight to the people without all those pesky hearings and debates and newspaper analyses.

And so initiatives are big business. The man and woman with the petition were professional signature gatherers. They get one buck, two bucks, even four bucks a signature to qualify a proposition for the ballot. I’ve asked; petition gatherers are common on campus right now. Idealistic young college students like to help others, especially if it’s easy. That’s how I used to feel.

And then you learn more. It turns out that Governor Brown has said he’d veto money in the state budget for new school construction; he doesn’t want the state to take on more debt. He thinks the cities and counties should fund their own construction. So the education lobbies are going around him to the voters by funding the ballot initiative. They know that people like to vote for school construction initiatives, and will.

People like to do it because, they think it’s free. Sure, the state’s on the hook for another half-billion a year, but good things happen and their taxes don’t go up. (Their local taxes would indeed have to go up if local districts had to fund their own construction.)

The same goes for money for state parks and other public works, plus guarantees that certain programs will get X percentage of the state budget “no matter what.” There’s no immediate cost to the voters. So, they ask themselves on some level, why worry?

But when California ran out of money a few years ago, government could do very little to shuffle money around because so much of it was tied up in mandatory bond payments and unalterable funding formulas that were mandated by the voters. But which were created and sold to the voters by small groups of people with lots of money and influence.

If it were up to me, I’d definitely have more school construction. And more help for the poor, more public works, better roads, and on and on. But you don’t get that by saying “make it so” on your ballot, like some starship captain. You do it by getting more money in the door. You do it by raising taxes on those who should be paying more.

In California’s case, you also do it by closing tax loopholes and exceptions that are a mile wide. I won’t go into details — if you live here, you know them — but I will say that, thanks to California’s famous Proposition 13 and some aggressive lawyering, commercial property owners have reduced their share of state-wide property tax receipts from roughly half down to a third or less in the last few decades. We need that money back.

In California it’s very easy to spend money and very hard to raise taxes.  Proposition 13 limited the ability of politicians to raise taxes, and made it much harder for voters to increase local taxes in their towns and counties. But it didn’t stop voters from spending unlimited “free money” by voting for expensive propositions that the state — not their town — had to pay for. This has to stop, one way or the other.

But we do not need more sales taxes for the poor to pay. We do need to get money out of the people who’ve wangled themselves a soft, cushy tax break that we can no longer afford to let them have.

Jerry Brown got Californians to blink a couple of years back when he said, “You will vote in a temporary tax increase, or I must make massive cuts to everything.” No governor had said that to Californians in decades. The pols always found a temporary trick to keep the money flowing without raising taxes, and carried on until the next crisis. And citizens reviled the “spend-thrift politicians.” But nobody can call Jerry Brown a spendthrift. No, they believed him when he said he’d cut massively. And they caved.

That was a one-time burst of sanity — or fear. Sometimes the two go together. But my fellow Californians are going to have to wise up permanently, or overcrowded university gyms will be the least of it. Actually, they are the least of it. The students and I can always get a workout somehow. University is built on hills; even walking to lunch can get you your daily cardio. 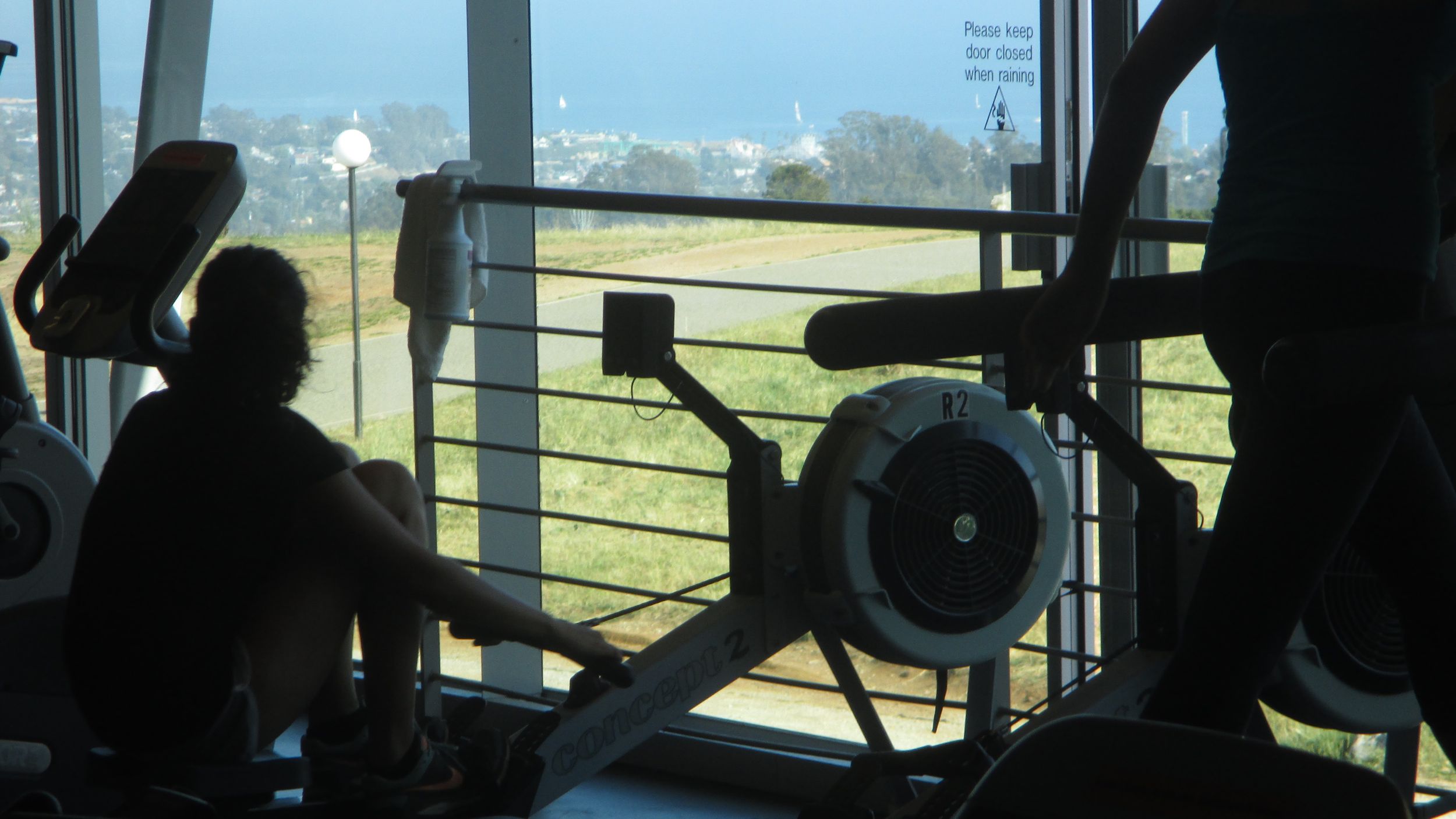 And I think they will wise up, or soon enough find themselves back where they were ten years ago. And not able to tell themselves, this time, that “spendthrift politicians” deserve all the blame. 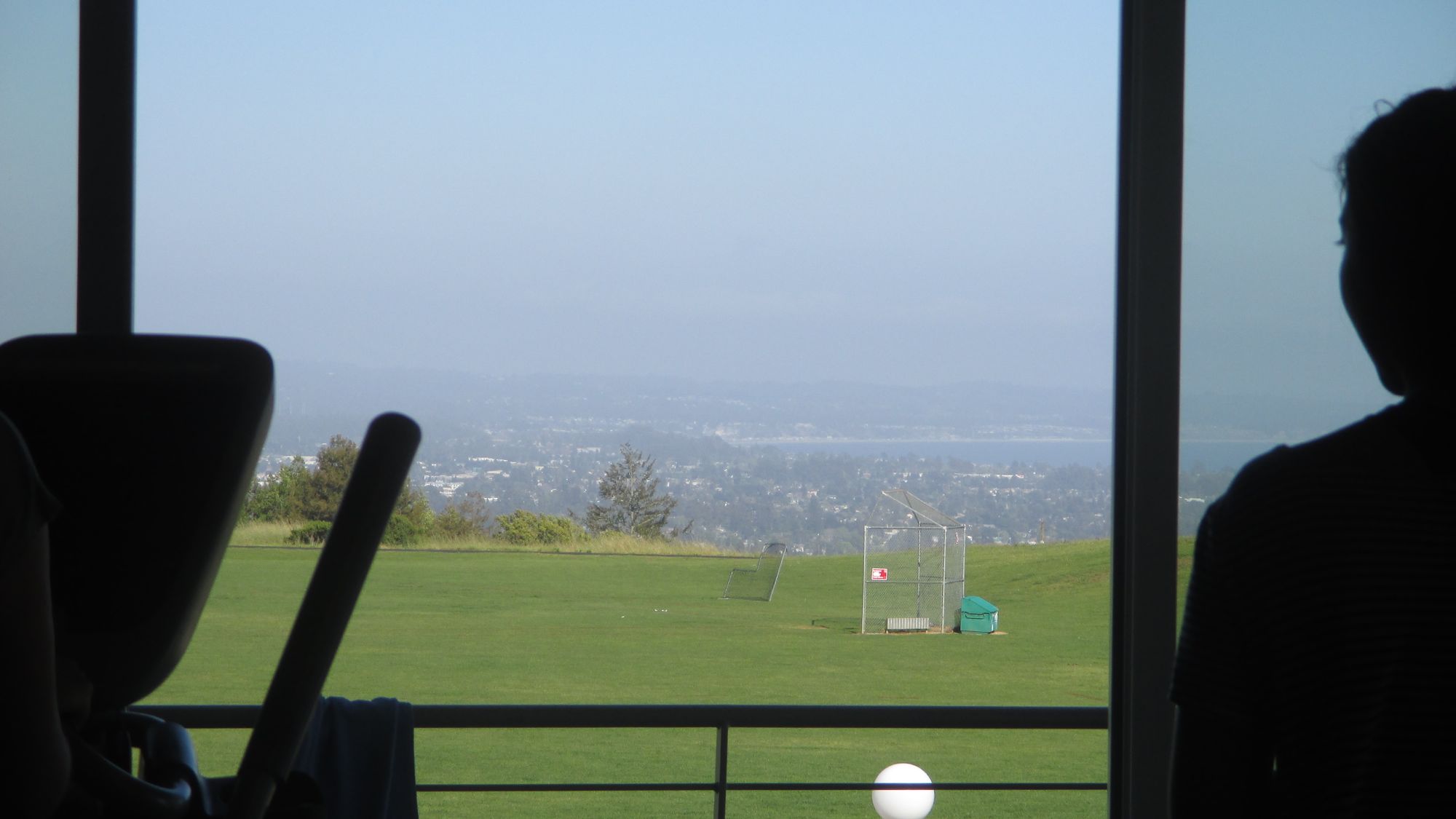